In Boston, Everything Is Illuminated 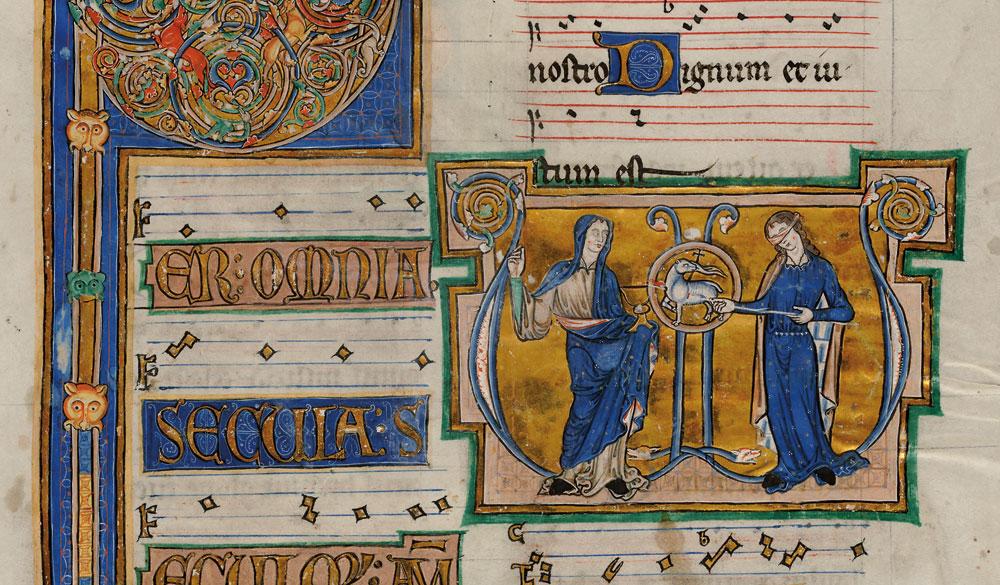 The Noyon Missal, a masterpiece of thirteenth-century illumination, exemplifies the Houghton Library’s portion of the multi-venue, Boston-area exhibition, Beyond Words.

Coinciding with this fall’s fortieth Boston International Antiquarian Book Fair on October 28–30 is an ambitious, multi-venue exhibition of illuminated manuscripts and early printed books, providing a tantalizing glimpse of medieval book production as well as a thorough examination of manuscript collecting in Boston at the turn of the nineteenth century. Beyond Words: Illuminated Manuscripts in Boston Collections is billed by its curators as “the largest exhibit of pre-1600 manuscripts ever mounted in North America.” Materials date from the eighth through the sixteenth centuries, and are drawn from nineteen Boston-area collections including Harvard University’s various libraries, the Isabella Stewart Gardner Museum, Boston College, the Armenian Museum and Library of America, the Boston Athenaeum, Brandeis University, the Massachusetts Institute of Technology, Northeastern University, Tufts University, and others.

Beyond Words is spread out on both sides of the Charles River in three locations, yet each is cleverly designed to stand on its own: The Houghton Library at Harvard hosts Manuscripts from Church and Cloister, Boston College’s Manuscripts for Pleasure and Piety charts the shift from the monastery to the private library, and the Isabella Stewart Gardner Museum brings the ensemble into the Enlightenment with Italian Renaissance Books. The trilogy explores biblio-culture as it related to various elements of society—books for clergy, the laypeople, and, eventually, Renaissance humanists. This is the first such installation in sixteen years, the last being the celebrated eighty-piece exhibition Leaves of Gold, mounted in 2001 by the Philadelphia Museum of Art and the Philadelphia Consortium of Special Collections Libraries. Beyond Words is the first of its kind for the Boston area, and outnumbers Leaves of Gold with 260 choice items available for close examination. Additionally, “all three venues will provide public programming, an audio guide, and access to digitized manuscripts,” said co-curator Lisa Fagin Davis.

Illuminated manuscripts—those handmade books filled with exquisite calligraphy and art—are among the splendors of Western civilization, captivating admirers through the ages. The volumes are embellished with illustrations called miniatures, deriving from two Latin words: miniāre, to color with red lead, and miniare, to illuminate. Strictly speaking, only illustrations completed with gold or silver paint elevate the work to “illuminated” status, but today, most hand-decorated books are commonly referred to as such by scholars and collectors.

The decision to mount Beyond Words in three separate sites was driven by the richness of the Boston-Cambridge collections. “We settled on the idea of using multiple venues, with each exploring a different element of the thousand-year history of literate culture and manuscript illumination in medieval and Renaissance Europe,” Davis said.

Harvard’s displays will highlight monastic scriptoria—rooms dedicated to writing and illuminating—and how these spaces ensured the survival of books through the ages. At Boston College, the focus shifts to the common reading public, where the exhibit explores the importance of visual culture and book illumination in everyday medieval life. The Gardner’s exhibition concentrates on the rediscovery of ancient texts during the Enlightenment. The “black tulip” of the show is an exquisite Book of Hours (1515) executed by the French court painter Jean Bourdichon (1427–1521).  Though largely unstudied until recently, the piece represents a transformation in the evolution of Western illumination, constituting what in essence was a bridge between the Middle Ages and the Renaissance. Isabella Stewart Gardner purchased the richly illustrated trompe l’oeil prayerbook during a visit to Venice in 1890, and for nearly a century it was one of the museum’s hidden masterpieces. Recently restored and rebound, the Book of Hours was prepared in time for the exhibition’s September opening, “a once-in-a-lifetime opportunity to display multiple miniatures from this early sixteenth-century masterpiece,” said Davis.

In addition to sharing the wealth of illuminated manuscripts and early printed books from local libraries and museums, Beyond Words chronicles the stories of the collectors, curators, and librarians who shepherded these manuscripts to the region, such as Gilded-age Bostonians Isabella Stewart Gardner (1840–1924), U.S. Senator Charles B. Sumner (1811–1874), author Charles Eliot Norton (1827–1908), painter Denman Waldo Ross (1853–1935), and art historian Bernard Berenson (1865–1959).

“We hope visitors come away from the show with an understanding of the broad story of literate culture and book production in the Middle Ages and Renaissance,” Davis said, “as well as some of the awe, admiration, and joy we the curators feel working with these spectacular—but very personal—works of art.”