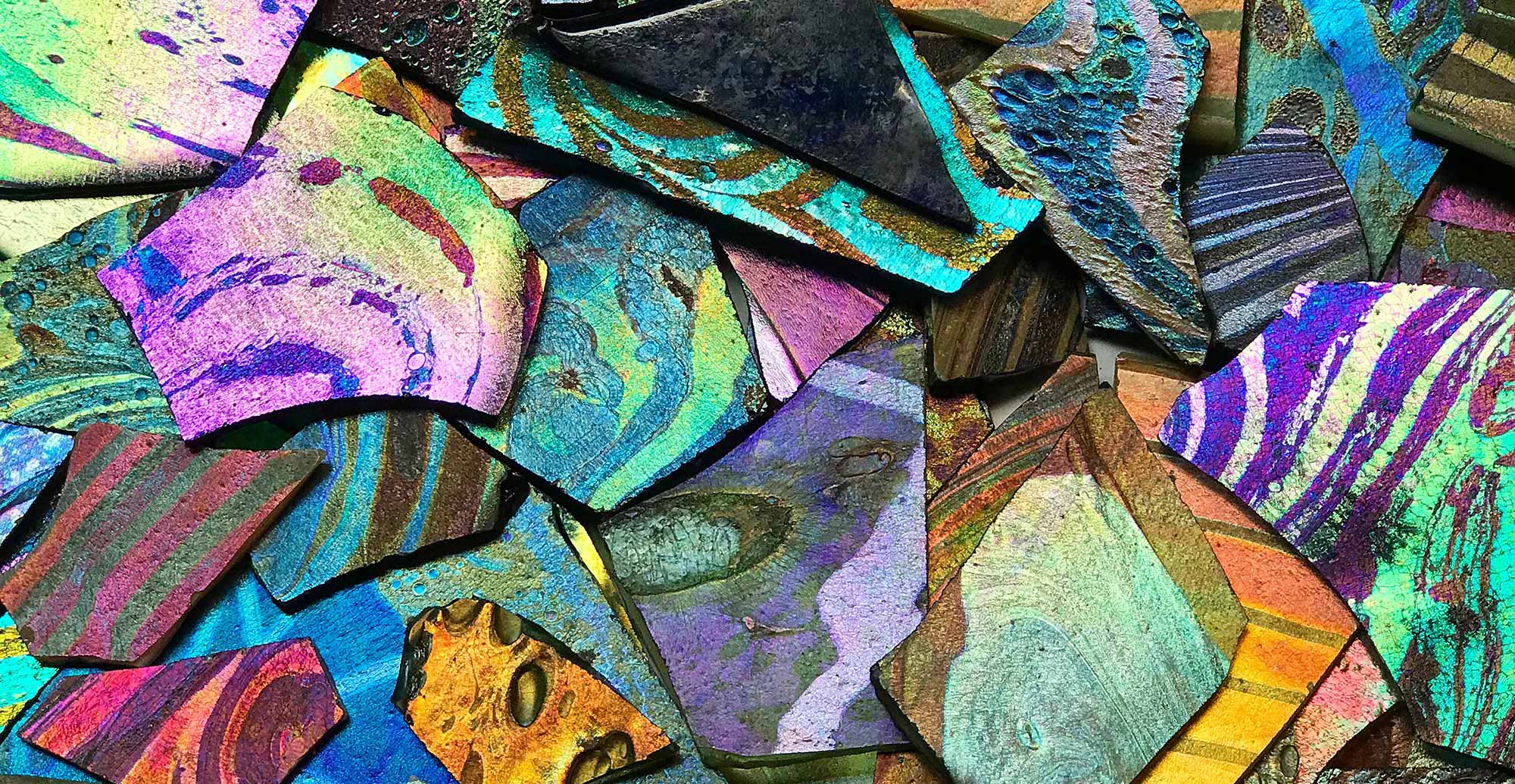 A scientific advancement and an artistic breakthrough created a craze for Tiffany glass which endures today. 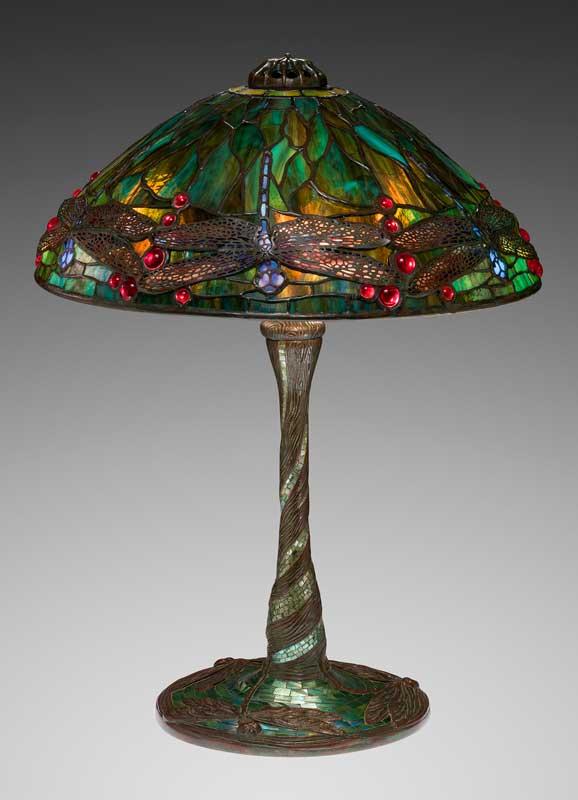 The Neustadt Collection of Tiffany Glass.

Louis Comfort Tiffany was fascinated with this iridescence (its name derived from Iris, Greek goddess of the rainbow) and wanted to recreate the phenomenon, without the years of interment.

Ancient Roman and Syrian glassware seems to change color in shifting light, with a rainbow of hues rippling across its surface. This iridescence was not part of the original design, but after centuries buried in the earth, the glass was weathered into thin layers. The interaction of light through this decayed surface causes a kaleidoscopic effect similar to an oil slick, soap bubble, or a butterfly’s wing.

Louis Comfort Tiffany was fascinated with this iridescence (its name derived from Iris, Greek goddess of the rainbow) and wanted to recreate the phenomenon, without the years of interment. At his furnaces in New York’s Corona, Queens—a site he purchased in 1893 partly for its seclusion from spying competitors—chemists Arthur J. Nash and Parker C. McIlhiney experimented with variations of heat and materials until they achieved a new process. Like the metallic lusterware being produced in Europe, it involved a gleaming base. They used silver nitrate that was then sprayed with a metallic salt solution. Because the color, ranging from a deep wavering blue to a luminous gold, was part of the glass, it had a vibrancy previously unseen in manufactured materials.

The iridescent glass, sometimes called Favrile, debuted to the public in 1895. It soon appeared on Tiffany’s classical tributes, like the Cypriote vases with imperfections inspired by antique glassware, as well as Art Nouveau imitations of nature. Tiffany compared the quality of this glass to “the wings of certain American butterflies, the necks of pigeons and peacocks, the wing covers of various beetles.”

It was wildly popular, inspiring imitators and appearing on Tiffany’s blown glass, mosaics, stained glass, metalware, and jewelry. Still, with the Great Depression and tastes changing to more modern design, Tiffany Studios went bankrupt three decades later. Just two years before the firm’s closure in 1937, Egon and Hildegard Neustadt, Austrian immigrants living in Flushing, Queens, happened upon a Tiffany Daffodil lamp in a Greenwich Village secondhand shop, and fell in love. They bought it for $12.50—a steal by today’s prices but a splurge for the young couple—and it sparked a lifelong passion for Tiffany glass, culminating in a collection of over 200 lamps. In 1967, they acquired the surviving flat glass inventory from Tiffany Studios, ranging from uncut sheets to tiny shards, many displaying that dazzling iridescence.

That inventory of over 250,000 glass pieces is now part of the Neustadt Collection of Tiffany Glass in Long Island City, Queens, founded in 1969 by the Neustadts. “The Neustadt is an unusual museum model in that we have an incredible art collection, but we do not maintain our own museum building,” said Lindsy R. Parrott, executive director and curator of the Neustadt.

While the Tiffany Glass Archive is open twice a month for small tours, the Neustadt actively tours and loans its lamps, objects, and glass fragments. Since 1995, the organization has partnered with the Queens Museum on a dedicated gallery. Tiffany's Iridescence: Glass in Rainbow Hues, on view through October 2019, highlights the science and artistry of iridescent glass, and the diverse ways Tiffany employed it in the firm’s wares. For instance, the compact exhibition includes three versions of the Dragonfly lampshade, one of many Tiffany lamp designs attributed to Clara Driscoll, head of the Women's Glass Cutting Department at Tiffany Studios. Two have blown glass bases from 1910, one shaped like a large vase and the other slender with rippling waves of luminescence, while another from 1905 has a mosaic inlay on its base, giving the impression of sunlight glinting on water.

The centerpiece of Tiffany’s Iridescence is an eight-foot-long table laden with thousands of iridescent shards, arranged like a rainbow gradation. “This glass was made specifically for Tiffany’s mosaics, two examples of which are on view in the Iridescence exhibition — a Dragonfly lamp with mosaic-inlaid base and a Carp tea stand,” Parrott stated. “We have bins and bins and bins of these small shards in our collection, but because they are quite small — some only a couple of inches long — they are particularly difficult to share with the public.” 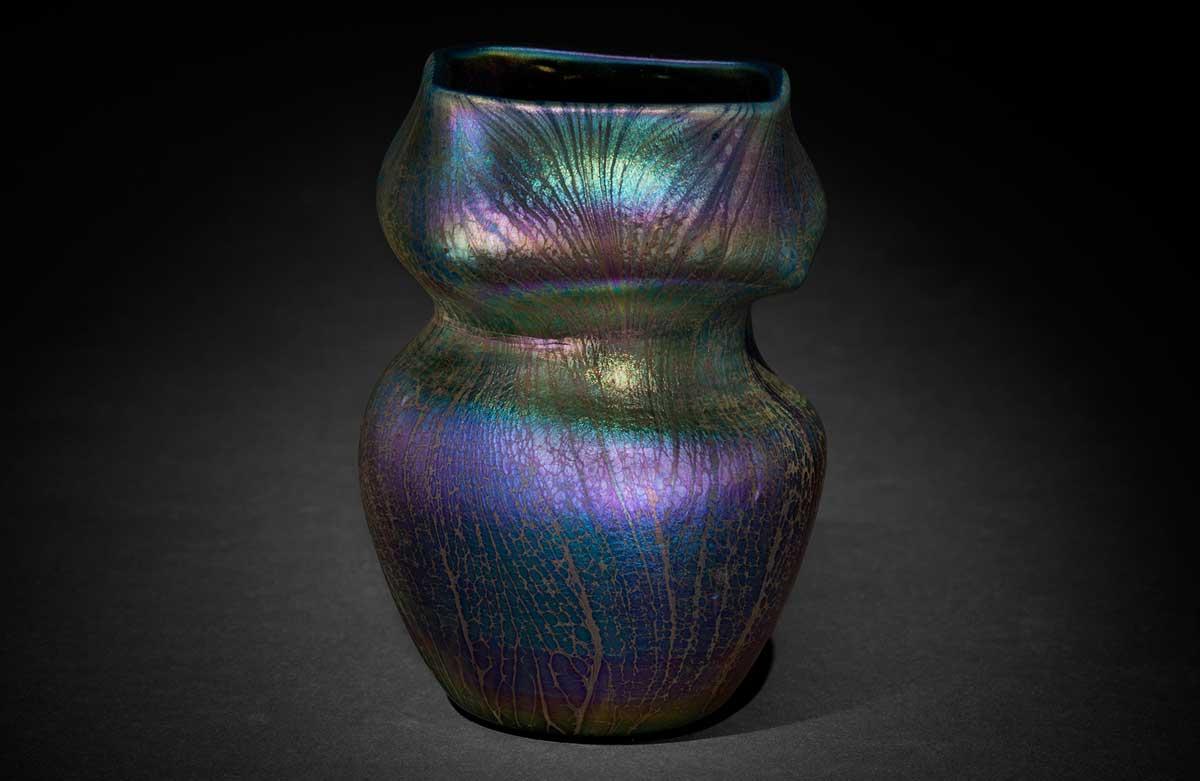 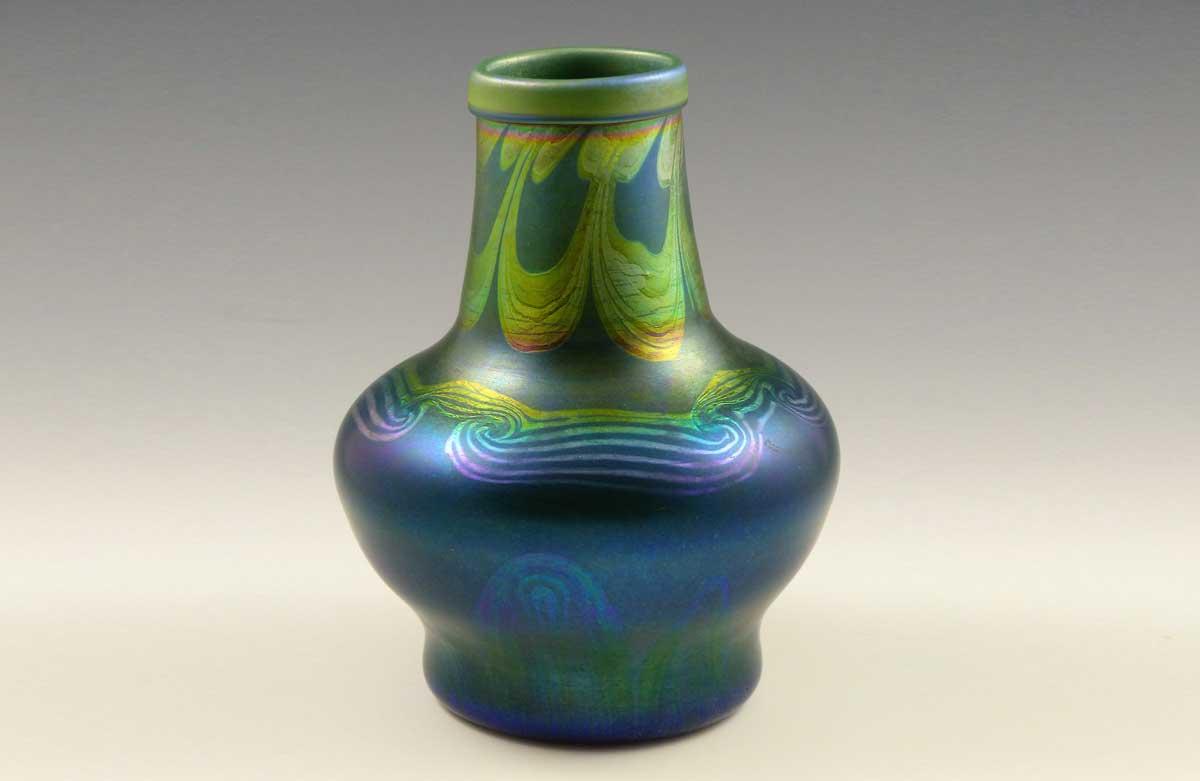 Collection of Dr. Gregory A. Merkel. 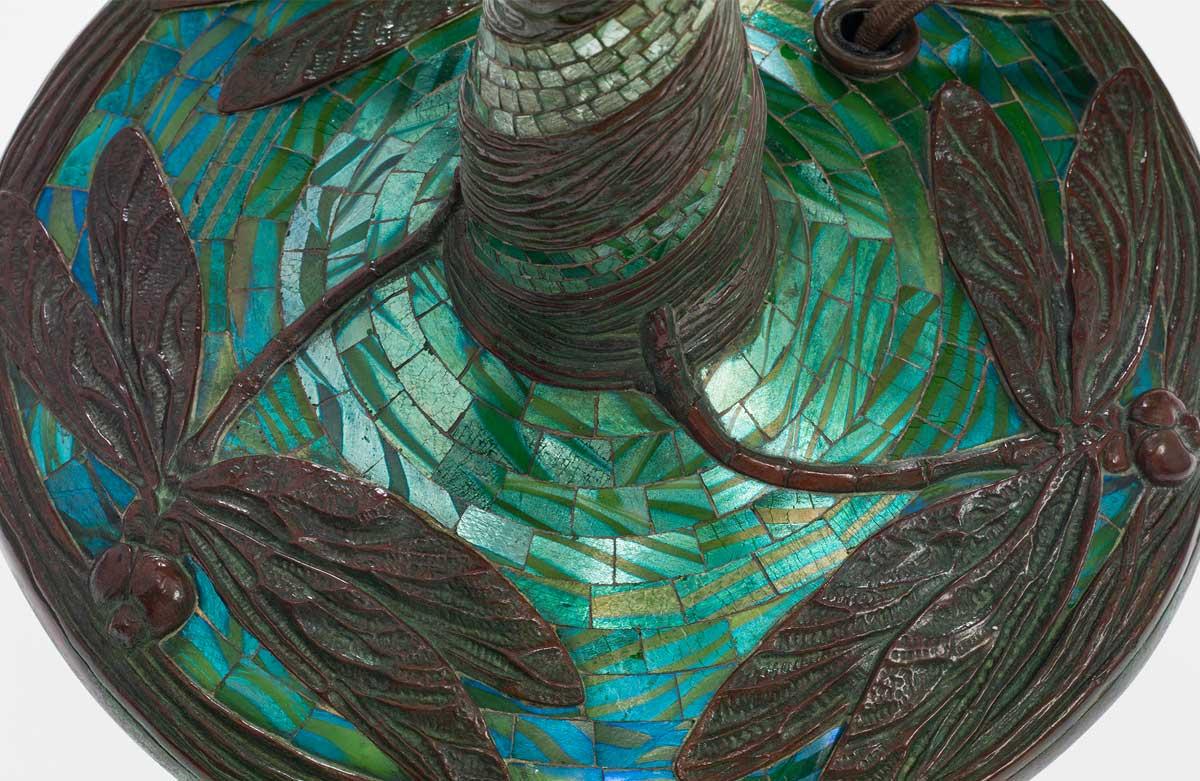 The Neustadt Collection of Tiffany Glass. 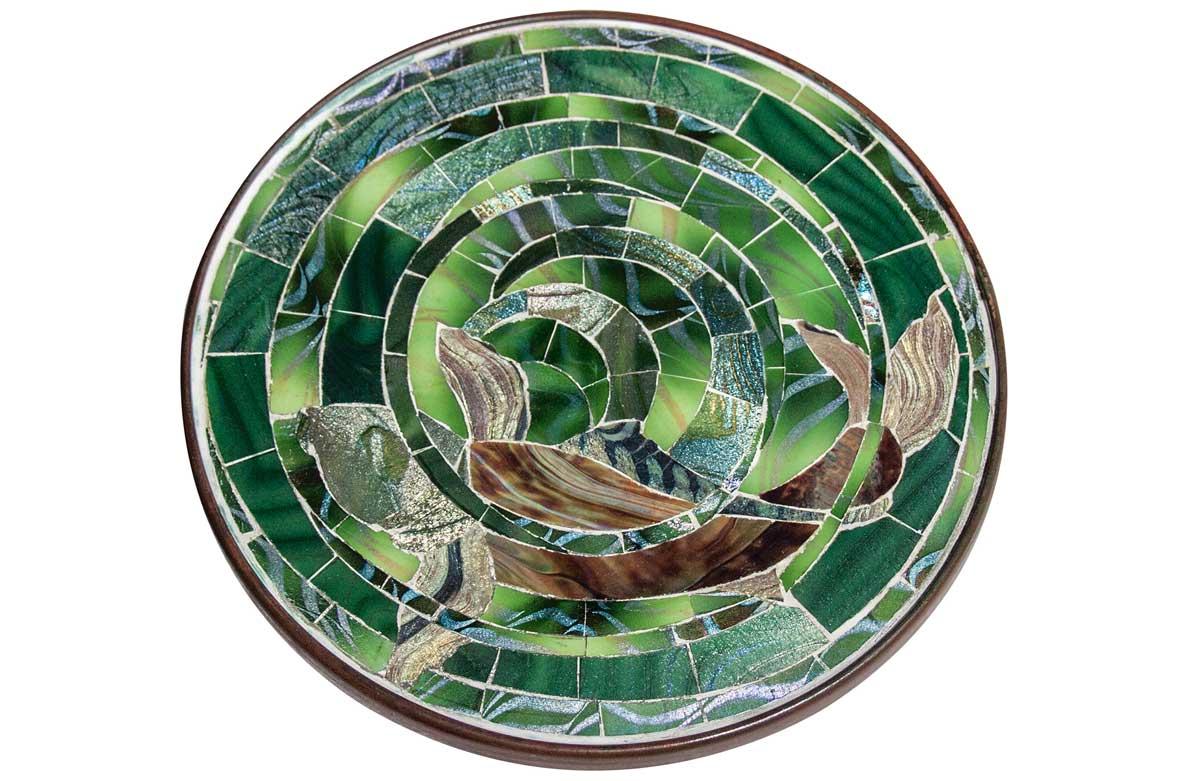 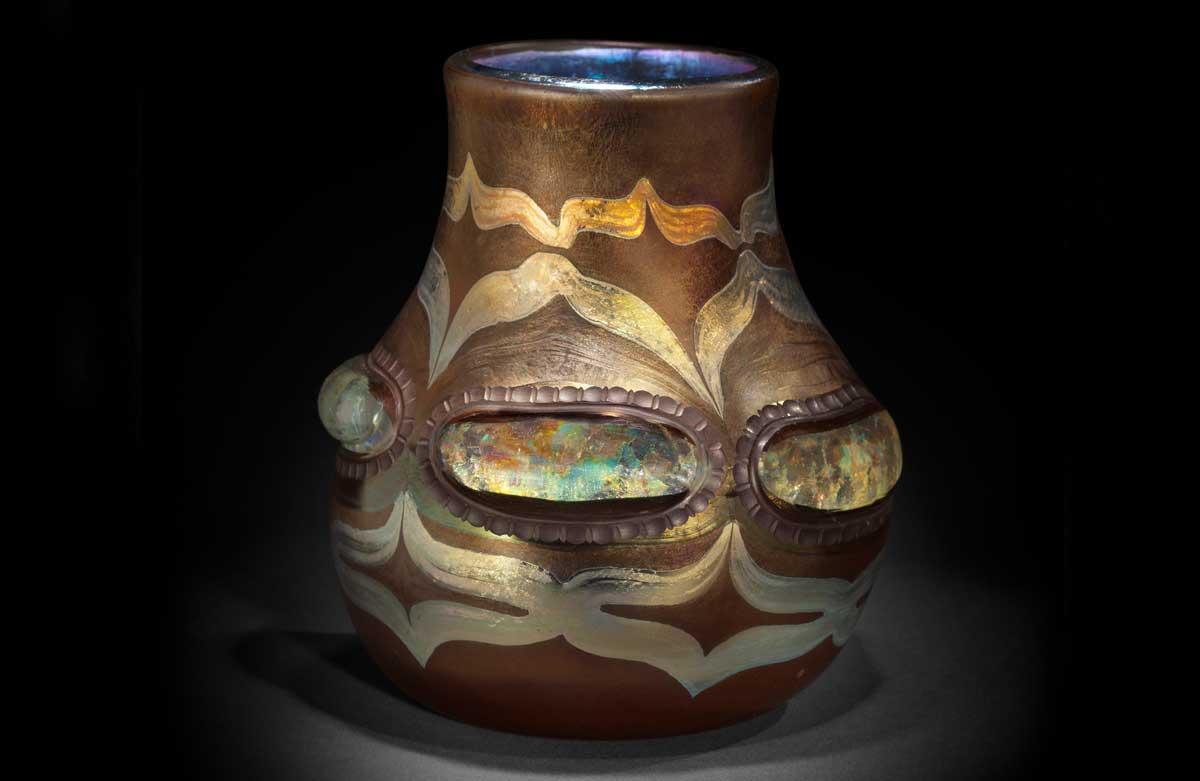 Alongside this fragmentary rainbow are loans of the ancient glass that influenced Tiffany, such as a small 1st century BCE Roman blown glass vessel. Other pieces show how Tiffany artisans simulated the iridescence of nature, including on later enamel and copper objects. A 1902-07 vase glints with a circle of green scarab beetles, while an 1898-1902 small covered box is decorated with peacock feathers.

“According to period articles, people just could not get enough of his newfound colors and effects,” said Morgan Albahary, curator of Tiffany’s Iridescence and assistant curator at the Neustadt. Albahary collaborated with Dr. Gregory A. Merkel, a research scientist for Corning Inc. and a trustee on the Neustadt’s board, whose research included non-invasive tests in the Neustadt’s glass archive. “When you compare Tiffany’s iridescent glass to that of his predecessors, which is something visitors can do in the exhibition, you understand, almost immediately, why people were so utterly blown away by it. There’s something bolder, more vibrant, and more intriguing about Tiffany’s iridescence.”

Other turn-of-the-center glassmakers experimented with iridescence processes, particularly after Tiffany’s success. Currently, the Cooper Hewitt Smithsonian Design Museum in Manhattan is exhibiting objects from its permanent collections in Iridescence, including early 1900s pieces from the Ohio-based Weller Pottery's iridescent Sicardo line, developed by ceramicist Jacques Sicard, and the Lancastrian high luster glazes overseen by Gordon Mitchell Forsyth at Pilkington’s Tile & Pottery Co. in England. Yet Tiffany, with his large team of scientists, artists, and artisans, remained a leader in both the creativity and technical innovation of iridescent glass.

“Something I discovered along the way was that Tiffany exhibited his iridescent glass at the New York Academy of Science in 1897,” Albahary stated. “While this may seem odd — to exhibit art objects at a science expo—I think it reveals something very important about Tiffany: he understood the duality of his work, that it was simultaneously highly artistic but also represented scientific advancement, and I think that really speaks to the innovator within him.”