From Hines to Christo: How Artists Influence Other Artists 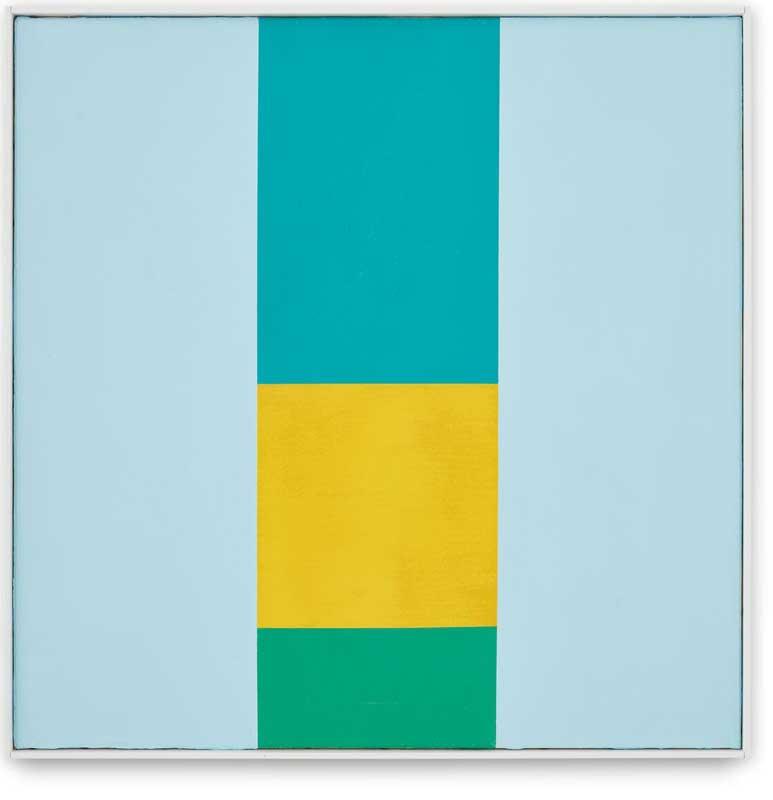 Every artist is influenced by those who came before them but, for some, that influence is more obvious or more profound than others.

Even Picasso, whose groundbreaking work seemed unprecedented in its time, knew that while originality in art is prized, art is not created in a vacuum. Every artist is influenced by those who came before them but, for some, that influence is more obvious or more profound than others. Many historians believe Shakespeare often stole plotlines and even whole scenes from other writers for his plays.

The thematic and technical similarities that characterize art movements are due in large measure to the deliberate imitation of seminal works of art. Modernism saw the appearance of manifestos, text documents that outlined not only the philosophy of its adherents but also stylistic boundaries that defined whole movements; Surrealism, Futurism, Constructivism, and Fluxus among others.

Art students are often under the thrall of their teachers, copying their work as a learning exercise or to curry favor, but the end goal is to move beyond your instructor and carve out some new, “original” territory for which you will be recognized and rewarded with grants, prizes, gallery representation, and rising prices at auction.

Picasso was taught to paint and draw from nature by his artist father but, by age fourteen, Picasso’s originality and skill had surpassed his teacher. Everyone recognizes Les Demoiselles de Avignon (1907) as a seminal Picasso painting but, in the early stages of Cubism, Picasso copied Braque who was more innovative.

Noted art collector and founder of the Aspen Institute Leonard A. Lauder said, “they did everything together” referring to the relationship between Picasso and Braque during the evolution of cubism. Lauder continued, “Cubism is like looking at a diamond.” It has many facets.

Lauder also mentioned Cézanne’s profound influence on Braque. Perhaps no artist had a more significant impact on Modernism than Paul Cézanne. NPR’s Susan Stanberg covered this topic in a discussion of the 2009 exhibition, Cézanne and Beyond at The Philadelphia Museum of Art.

The 1888 peak of Van Gogh’s symbiotic relationship with Gauguin is well documented in text and films like the 1956 classic Lust for Life, starring Kirk Douglas as Van Gogh and Anthony Quin as Gauguin. The highly charged partnership between the two artists ended when Van Gogh threatened Gauguin with a knife and Gauguin left Arles.

But, as stated on the Van Gogh Museum website, “After parting ways neither artist could escape the other's influence. Gauguin's work began to have more religious themes after being influenced by Van Gogh's strong religious background. Gauguin also began using brighter colors, especially yellow, and thicker brush strokes like Van Gogh. Van Gogh began to use Gauguin's technique of painting from memory.”

Perhaps no single painting has subsequently generated more artwork than Van Gogh’s Starry Night (1889). Dutch artist Daan Roosegaarde (1979-) creates technology-driven, interactive public artworks that often focus on the effects of light on the environment. He demonstrated how paintings can be reinterpreted in other media by creating a 2,000-foot-long bike path using embedded lights that react to motion in a pattern invoking Van Gogh’s iconic painting. 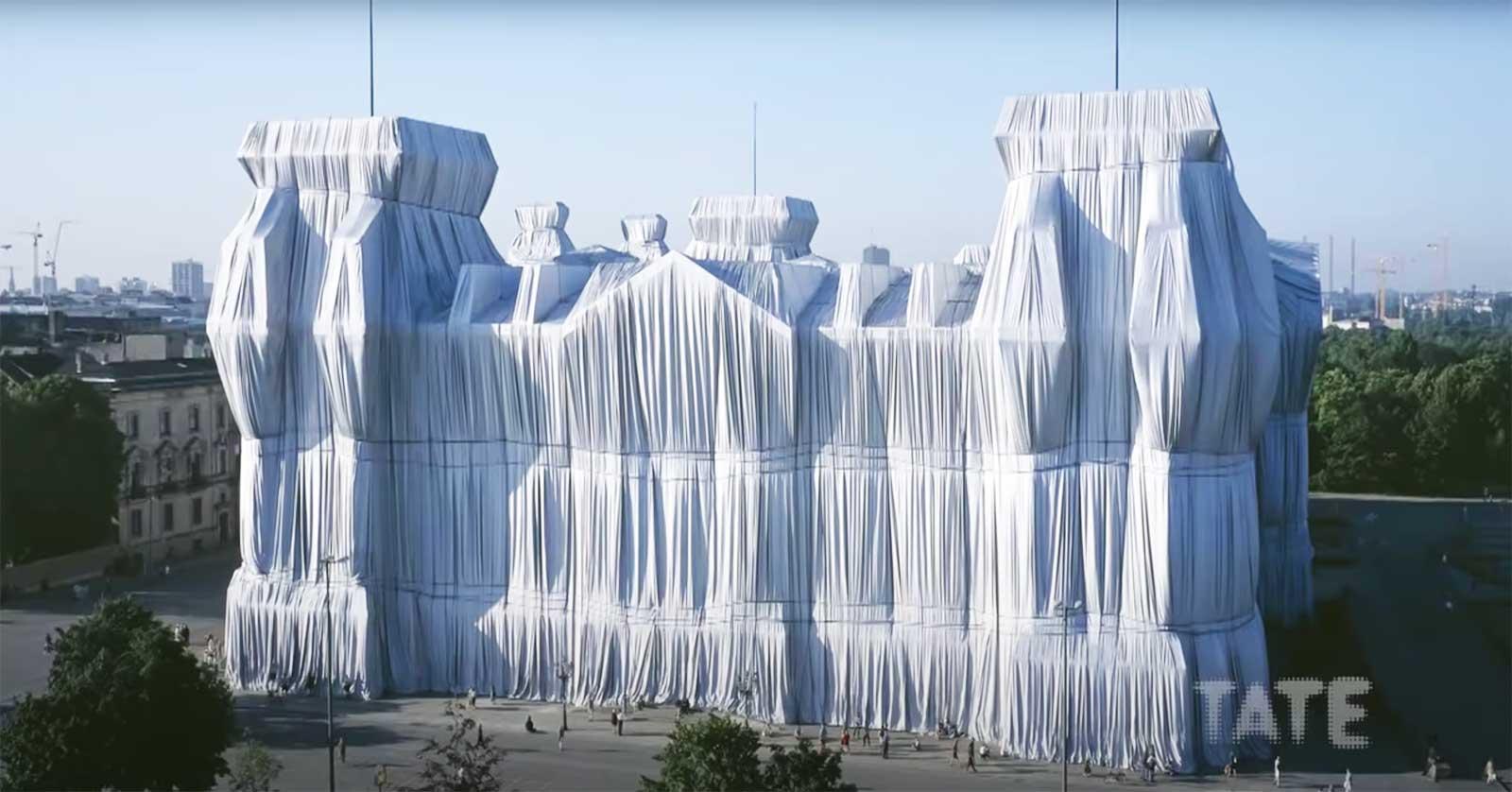 Still from Christo and Jeanne-Claude Wrap Up the Reichstag. 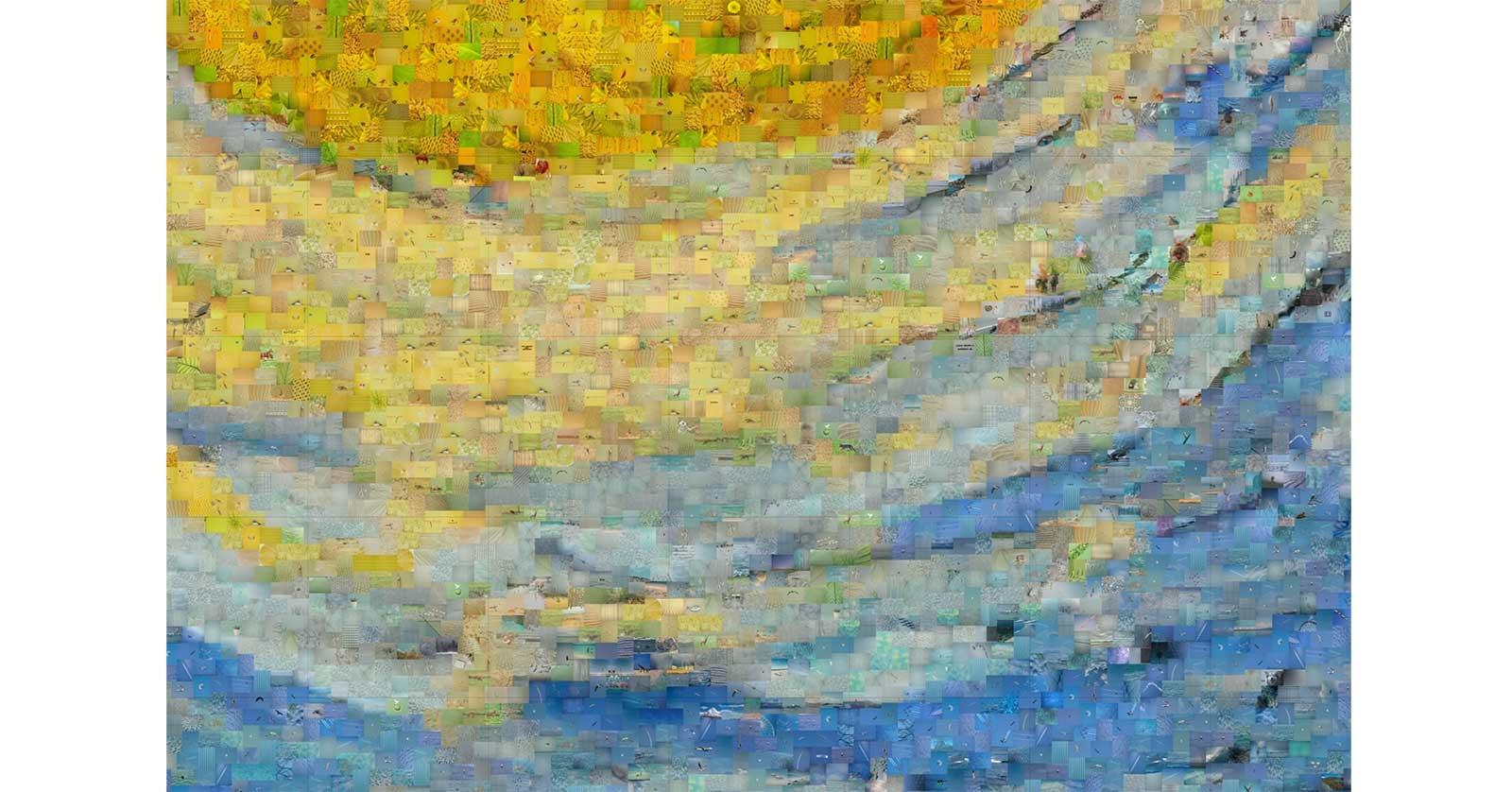 Detail of a photo-based mosaic re-creation of Starry Night made with Andrea Mosaic. 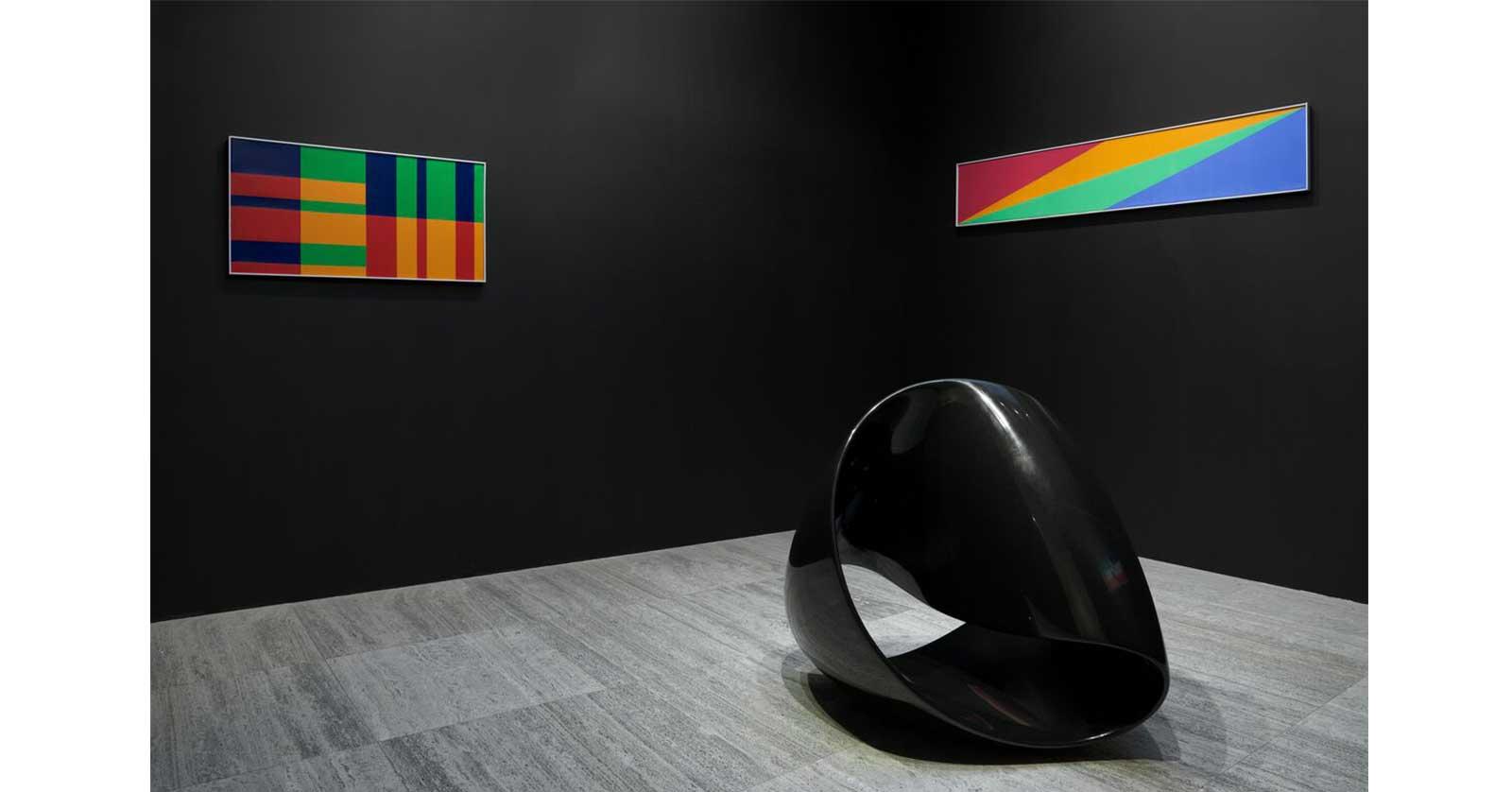 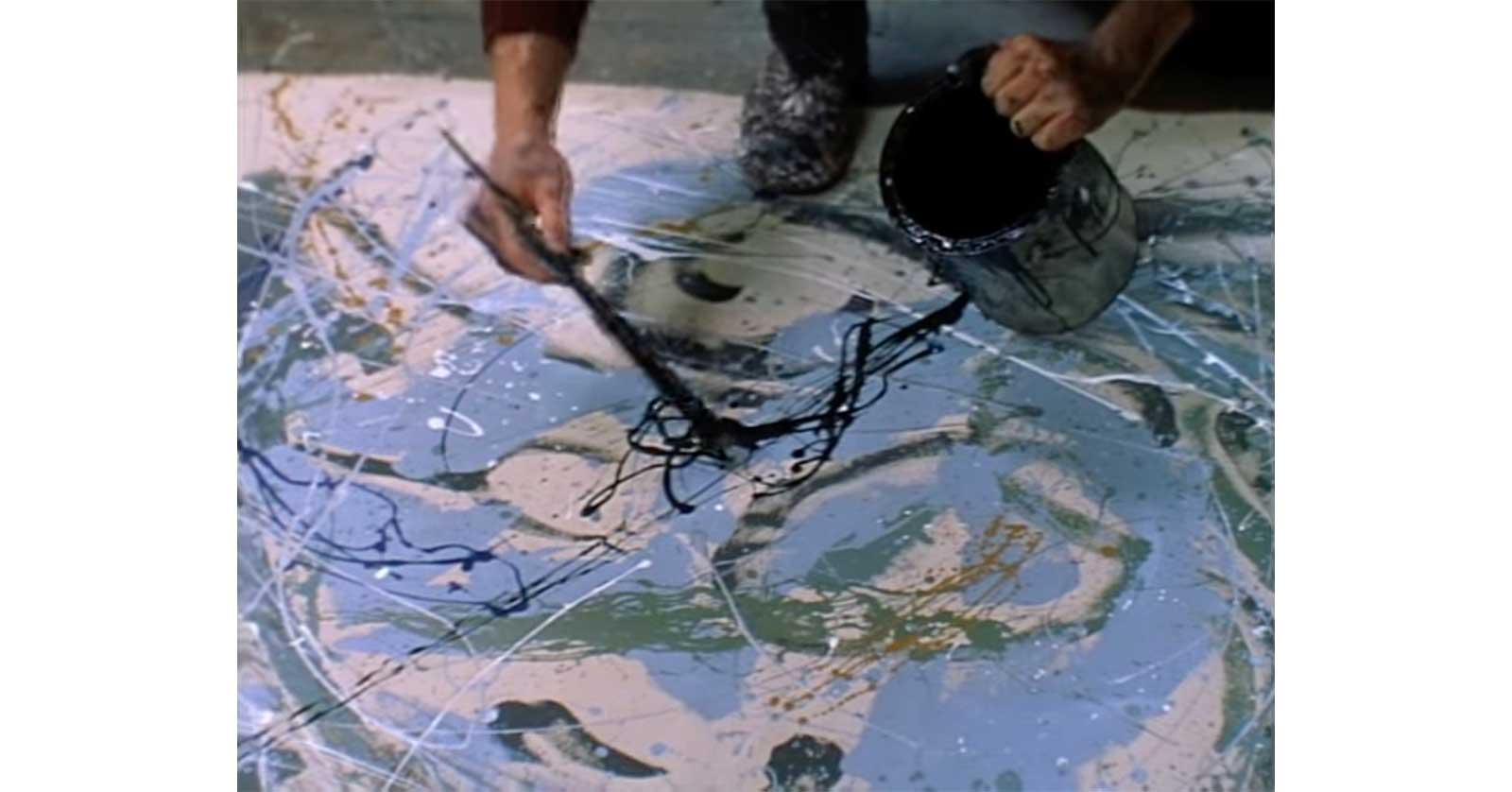 Sometimes the uncovering of creative similarities is shocking. Take the 2021 exhibition Discovering New York's Wrapper: The Art of Francis Hines at the Mattatuck Museum in Connecticut. Francis Hines wrapped the Washington Square Arch in New York City in 1980, over four decades before Christo and Jean-Claude’s concept for the wrapped Arc de Triomphe was realized in Paris in 2021. Although Hines knew the artworlds most famous wrapper of buildings, Christo, much of Hines' work predates him. Surprisingly, long before his death in 2016, Hines had fallen into obscurity. Given the Mattatuck Museum’s reassessment of his public artworks, Hines’ potential influence on Christo is too interesting to ignore.

Swiss artist and designer Max Bill (1908-1994) and Belgian-born artist Georges Vantongerloo (1886-1965) were good friends in life. After their, death Bill’s widow, the art historian Angela Thomas Schmid, set up the Max Bill Georges Vantongerloo Foundation to keep their legacy alive. Both artists contributed to Constructivism. Bill studied at the influential German-based Bauhaus and Vantongerloo was a signer of the original De Stijl (The Style) Manifesto (1918), written for an abstract reductivism movement whose most notable practitioner was Piet Mondrian.

From January through March 2022, the prestigious gallery Hauser & Wirth is presenting max bill & georges vantongerloo crossover at their 69th St location. The exhibition explores how these two artists fed on each other’s ideas developing a creative exchange that still reverberates in architecture and design today.

Most artists who are confident in their abilities are willing to openly share who they learned from and who influenced their stylistic direction. Contemporary artist/filmmaker Julian Schnabel acknowledged Van Gogh’s impact on his own work as an artist by directing At Eternity’s Gate, a 2018 award-winning biographical drama.

While inspiration is a link connecting one artist to another in the long chain of art history, “copying,” in this author’s opinion, is to be avoided. Except, when an artist is asked to recreate artworks as close as possible to, usually famous, original masterworks—not to be forgeries sold illegally in the underground art market, but to appear as props in feature films. Actor Ed Harris played abstract expressionist Jackson Pollock in the biographical feature film Pollock (2000). Getting museums to loan original Pollocks from their collections was out of the question so Harris taught himself to paint in Pollock’s signature drip style and those paintings appeared in the film.

In 1996, Basquiat, Julian Schnabel’s first film, was also the first film made by an artist about another artist. Schnabel was not able to get the rights to use original Basquiat paintings so he, along with his assistant Greg Bogan, made paintings “in-the-style-of” Basquiat. These too were prominently featured in the film.

In these cases, copying the works as closely as possible could be seen as disrespectful or as a way to pay homage to an artist’s legacy in another medium.