Can the visual arts capture movement in stillness? This slideshow traces the representation of dance, particularly of dancing groups, through western art history with special attention paid to the trope’s Grecian origins. Maenads, the female followers of Dionysus, and Nymphs, usually following Hermes or Pan, are among the most popular dancing Greek figures. In Greek art, maenads in particular tended to appear erratic, frenzied, and clad in pelt, while, with the onset of Roman art, they became more graceful. In one of the surviving frescoes of Pompeii, a Maenad is depicted wearing billowy, gossamer clothing that would become a signature style in most of the depiction of dancers.

Fascination with groups of dancers remained constant in the West from the Renaissance onwards. Painters and sculptors often used dancing figures as central characters in their paintings when they sought to represent mythological scenes and pastoral revelries or engage in studies of movement and harmony. 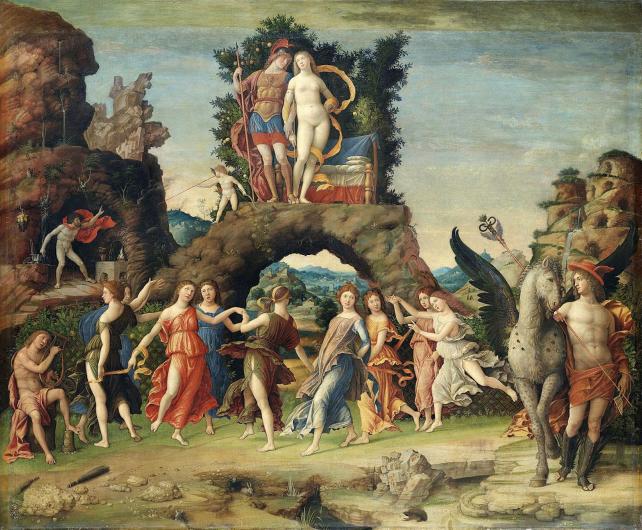 Much like in Botticelli’s Triumph of Spring, Mantegna’s Parnassus—which features the three graces dancing—reveling dancers are not the main characters of the painting. Rather, Parnassus represents the triumph of Mars and Venus. In the clearing at the base of the mountain, Apollo plays the lyre as the muses dance in a circular pattern. 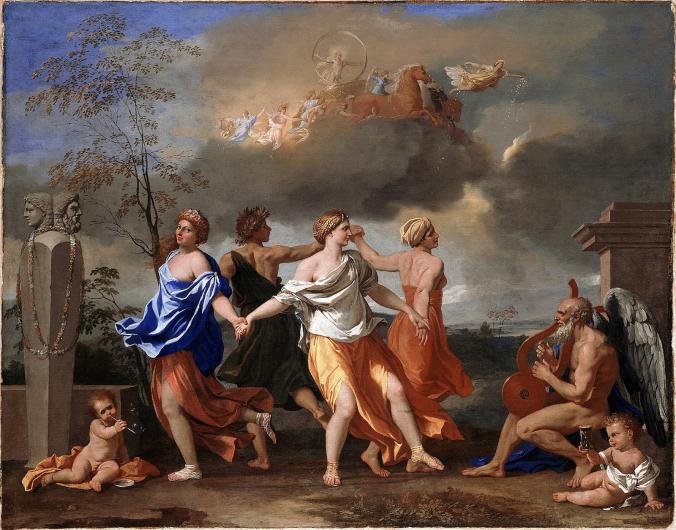 The father of French classicism Nicolas Poussin is mainly known for his stern and philosophical painting. Yet, in his early years (1620 to 1630s), he painted scenes of revelry and merriment within pastoral and mythological landscapes. While in Rome, he drew inspiration from bas-reliefs, and his study of dancing figures allowed him to arrest motion within his compositions. He also famously staged the scenes of his work using wax figurines.

The lessons he learned while painting dancers stayed with him throughout his career. Even his battle-themed and religious paintings clearly appear, for lack of a better term, choreographed. In particular, his painting A Dance to the Music of Time, has the four figures dancing to the lyre as stand-ins for stages of life—Poverty, Labour, Riches, and Pleasure or Luxury—while the lyre player represents time. 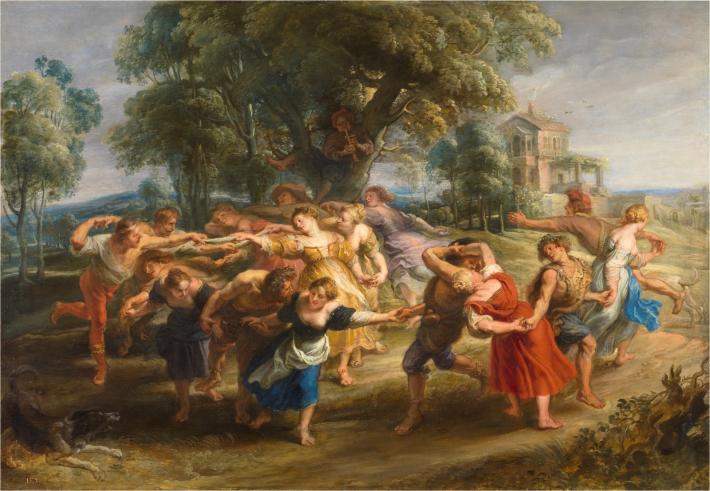 While artists in Southern Europe and France mainly depicted dancers as part of a mythological tableau, Northern European scenes of dance had a more folk-like bent, showing villagers in moments of merriment.

Rubens was no exception: In his Dance of the Villagers, he has a group of peasants engage in a frenzied dance spurned by Bacchus and a satyr. The sweeping dynamism of this scene—where limbs are interlocked, body lines are twisted, and garments follow the characters’ line of action—is further accentuated by a dog, who runs parallel to the group. 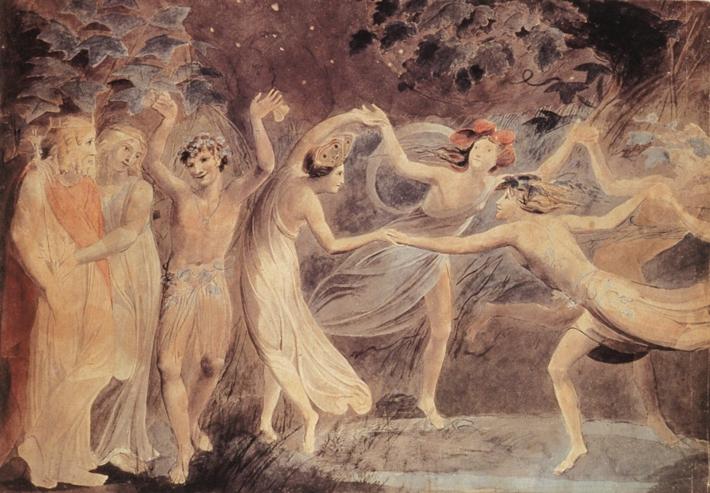 Poet and painter William Blake depicted a scene from A Midsummer Night’s Dream where the characters Oberon, Titania, and Puck danced with a group of fairies in a woodland setting. In particular, the fairies dance in a ring, which is evocative of the traditional English folk dances associated with midsummer and May Day festivities, even though we have seen (and will see) this same type of dance represented in classic or classical-inspired artworks. 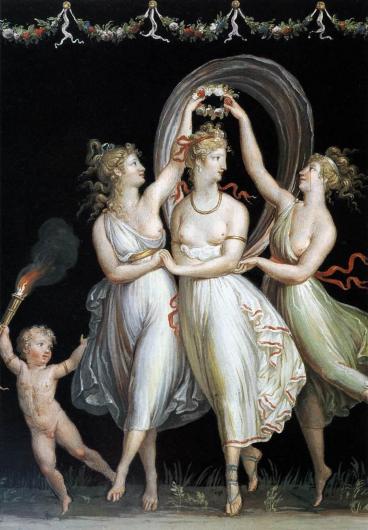 Other than the classical world, the biggest sources of inspiration for Italian sculptor Antonio Canova were dance, theater, and music. In particular, he was a devoted audience member of the Attitudes, tableaux vivants hosted in Naples by Emma Hamilton, the young wife of the British ambassador, who recreated scenes from Greek mythology.

“As beauty in movement [dance] was an archetype of Neoclassical art, a natural embodiment of the grace that constituted the new aesthetics category of the time,” wrote art historian Salvatore Napolitano in 2014 for the journal Source: Notes in the History of Art. In stillness, Canova managed to reproduce the frenzy of the movement and the quick bursts of the dancing figures. In group portrayals of dancers, the symmetry of circles and ellipses were Canova’s main hallmarks. 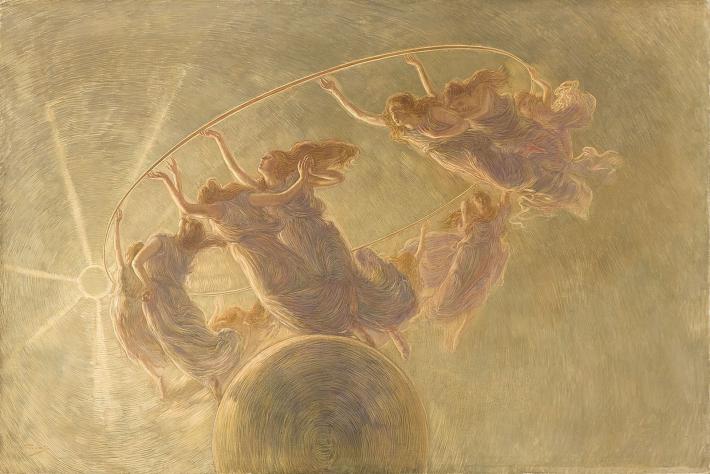 Gaetano Previati, The Dance of the Hours, 1899.

In 1876, composer Amilcare Ponchielli devised The Dance of the Hours, a ten-minute ballet in the third act of his opera La Gioconda. Set in a grand ballroom twelve female figures dance in circles as stand-ins of different hours of the day, while two male dancers represent the hands of the clock. In Greek mythology, the Hours are the personification of the cycle of seasons. So, Previati depicted twelve gossamer-clad women dancing in a circular motion around what looks like a cosmic circle.

The sun, coming from the left-side corner, combined with a light and muted color palette, almost has a blinding effect on the viewers. Formally and compositionally, this painting was not particularly well-received by critics, but it’s now considered a seminal work in the Divisionist art movement, as individual brushstrokes painstakingly recreated the shimmer and refraction of light. It also depicts an idea of cosmology that is typical of fin-de-siècle symbolism, envisioning the cosmos as music and light. 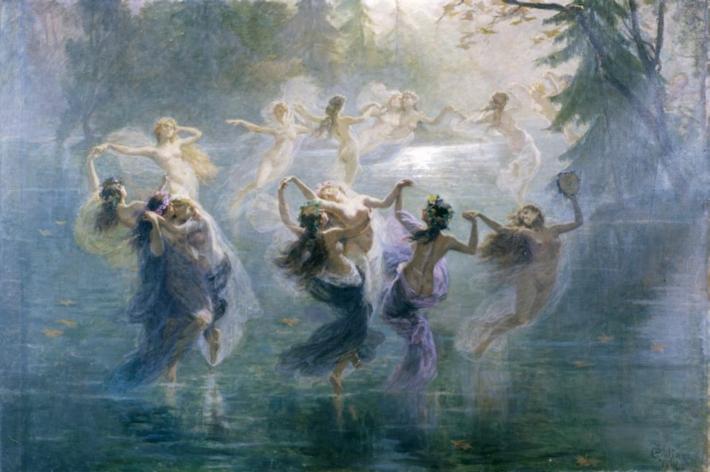 Giuliano presented this painting at the national fine-art exhibition in Milan in 1906. He was inspired by Slavic folklore, which reached mainstream audiences through the ballet Giselle. The vili are spirits of young women who died before getting married, and, under the cover of darkness, they awake to avenge the fate that befell them. This painting references a scene from Le Villi, Giacomo Puccini’s first opera that debuted in 1884, where the father of the heroine summons the viliin order to avenge his daughter’s betrayal at the hand of her betrothed. Giuliano depicts their frantic dance in circular, almost whirlpool-like motion, which is typical of the dance-related iconography of the twentieth century. 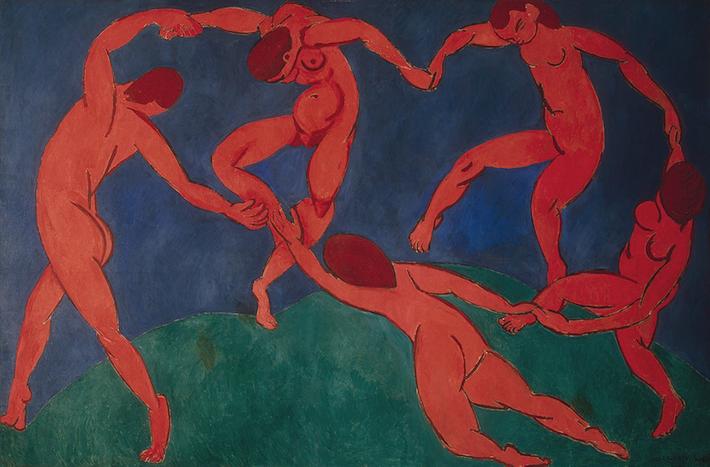 This image consists of five dancing figures, painted in bold hues—their bodies are a strong red, the landscape is green, and the sky is blue. Their bodies move in rhythmical succession, which conveys the feelings of emotional liberation and ecstasy. The painting is often associated with the Dance of the Young Girls from Igor Stravinsky's famous musical work The Rite of Spring (1913) and we can also see hints of Blake’s Oberon, Titania, and Puck with Fairies Dancing from 1786.

While this painting does not possess the figurative realism of the other artworks, the dynamic movement manifests itself in the sweeping curve along the front side of the left figure and along the outstretched arms of the dancers.