7 Queens Who Illustrate the Art of Drag

In the RuPaul’s Drag Race: Season 13 finale, when Gottmik stepped out in a red Keith-Haring-meets-David-Bowie pantsuit, it felt like a brilliant exclamation point—emphasizing that the shared space between drag and fine art was reaching its apotheosis.

Drag and art have been mutually intertwined for centuries, long before the term existed, through drag queens and kings who are also practicing artists; artists who incorporate drag into their work; and, of course, drag queens, makeup artists, and designers whose work embodies all the transcendence, conceptual power, emotion, and meticulousness associated with great art.

As an art form, drag typically achieves two major things—visual illusions which subvert societal notions of a gender binary and escapism via an alter-ego that often manifests in a new level of awareness and access to one's own personal power. As American states levy an unprecedented amount of anti-trans bill proposals, the art form is gaining traction both in popularity and importance.

We’ve rounded up artists who—whether working in drag or drag adjacent—have contributed to the elevation of drag within the social conscious, from the performance-based photography of Miss Meatface to the otherworldly transformations of stars like Yvie Oddly and Kim Chi. 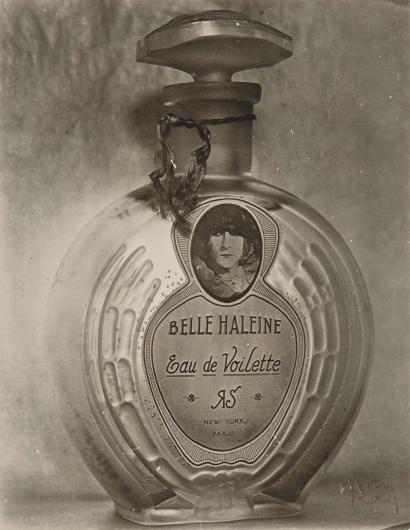 The history of drag reaches back for centuries, long before the term existed. As scholars and writers have pointed out, artists often adopted the concept to expose societal conventions. Take Marcel Duchamp—in 1920, Duchamp developed his alter ego, Rrose Sélavy, who would later be the subject of fashion photographs by American artist Man Ray. Interestingly, though drag balls date back to 1869, the 1920s marked a brief fever pitch of queer visibility, particularly in big American cities as prohibition forced partiers into unpoliced spaces where queerness and interracial mingling became the norm.

The wordplay of Rrose Sélavy has multiple possible meanings (“Eros, c’est la vie”; “La vie en rose”), and the double ‘R’ in her own moniker only intensifies this multiplicity. Sélavy embodied the subversive side of Duchamp’s work, opening up questions around identity, self-portraiture, and gender. 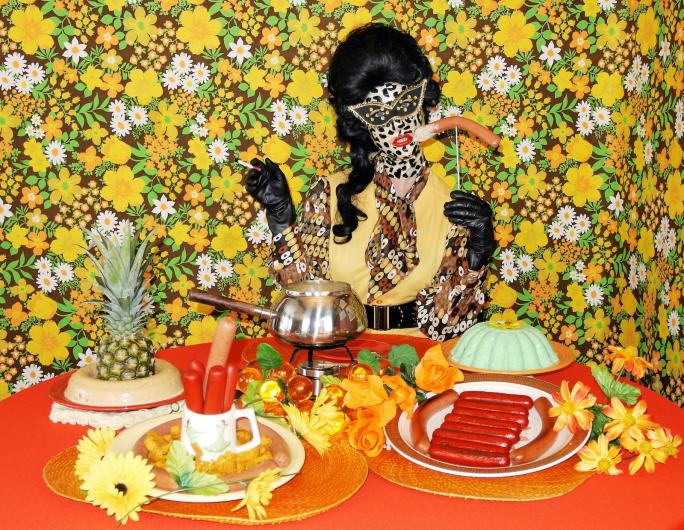 Kat Toronto developed her Miss Meatface persona after surviving a rare form of cervical cancer and undergoing a hysterectomy in 2014. Using special effects makeup, Toronto began experimenting with adding black eyes and bloody noses to her face—artificial injuries that reflected an intense emotional bruising. As her Miss Meatface persona evolved, she moved from makeup to latex masks, which allowed her to strip away her identity and become a blank canvas (or, in some cases, turn herself into a doll). The mask allows her to transcend the gender binary and become an object. 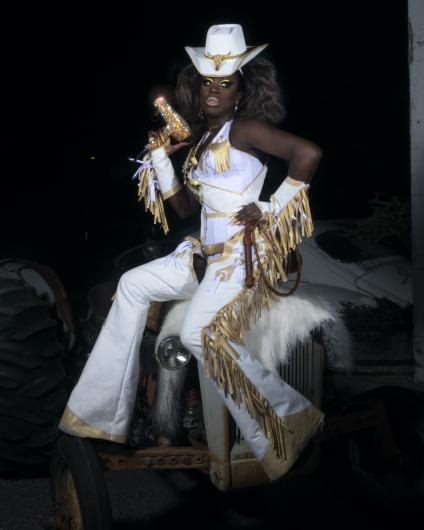 Press image of Bob the Drag Queen in We’re Here.

“Do you ever have those existential moments where you think ‘what’s my purpose in life?'” Bob the Drag Queen once asked in an interview. We have all been there, and for Bob, the answer—at least to the latter question—is drag. The acclaimed comic/actor, who goes by Caldwell Tidicue and identifies as nonbinary out of drag, first came to prominence after winning RuPaul’s DragRace: Season 8. Bob is irreverent, unapologetically activist-oriented, and has been arrested multiple times—sometimes in full drag—fighting for marriage equality in New York through 2011. Since, Bob has made appearances on Tales of the City (Netflix) and We’re Here (HBO), released two comedy specials, co-hosted Black Queer Town Hall with Miss Peppermint, and continues to host the podcast Sibling Rivalry with Monét X Change.

4 of 7
Courtesy of the artist. 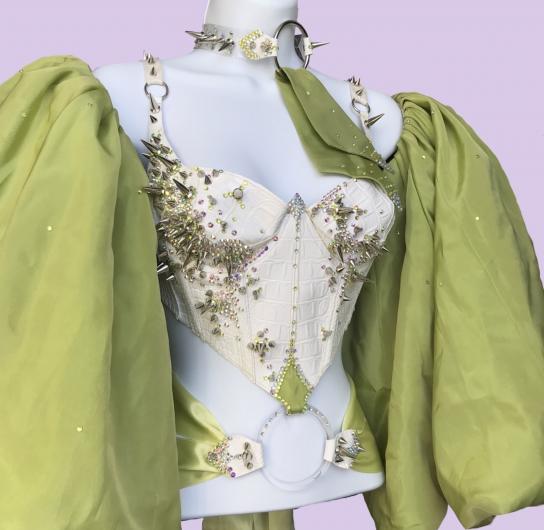 Elias Matso’s first-ever commission was from—wait for it—Bob the Drag Queen. The nineteen-year-old artist and designer created a mod-inspired Wednesday Addams costume for the icon, comprised of upcycled black dresses. The gloomy-but-glamorous look was a far cry from the one depicted here: a jubilant bustier-choker set made from faux croc leather, silk taffeta, metal studs, silk ribbon, and Swarovski crystals designed for a fashion show. But these designs represent just a subset of Matso’s many talents; the young artist works across mediums, including in drag, painting, sculpture, and digital media.

5 of 7
Image courtesy of the artist and Voss Events. Photography by Adam Ouahmane. 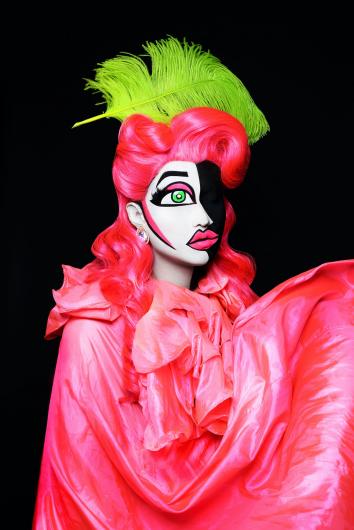 Kim Chi in a makeup look that doubles as an homage to Picasso.

In September of last year, Kim Chi posted a close-up of her face, each feature totally disguised and repainted in fragmented geometric green, yellow, pink, and blue shapes—in homage to Picasso. The look, which was uncanny yet transcendent, is just one example of how the Drag Race runner-up’s work soaks in and reimagines our cultural milieu. Incorporating elements of anime, conceptual fashion, pop culture, and fine art, Kim Chi’s work is meticulous, delightful, and surprising, asking why we settle for reality when we could be exploring the most exaggerated, joyful edges of our creativity. 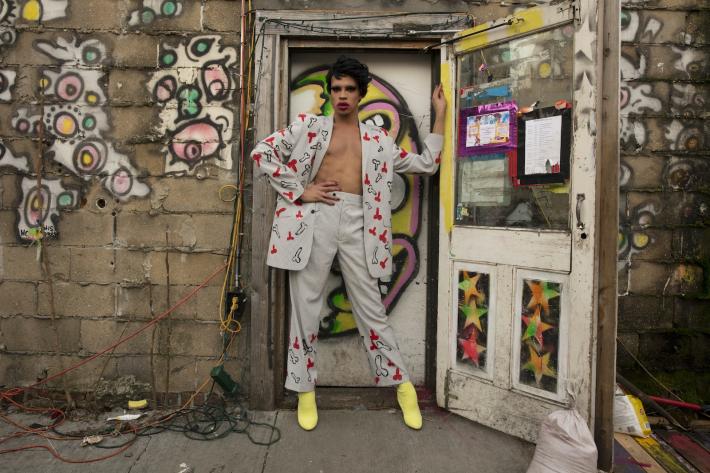 Yvie Oddly in a hand-painted suit.

A classically trained artist, rapper, fashion designer, and drag queen, Yvie Oddly is known for her interdisciplinary, conceptual approach to art, life, and performance. The multifaceted artist won RuPaul’s Drag Race: Season 11, in part due to her transformative power. Yvie can chameleon from glamour to guacamole (picture this: green wig, green face paint, adorned with tortilla chips). Her artworks similarly grapple with transformation, incorporating otherworldly, fantastical elements that are a beautiful, inclusive testament to the “oddly” in her name. Part of her work has also been in highlighting the contributions of queer people of color. “We’ve never been given credit for the beautiful art that we’ve put out in the world,” she said in an interview with i-D. “But now we’re having a renaissance.”

7 of 7
Image courtesy of the artist. Photography by Darklisted Photography. 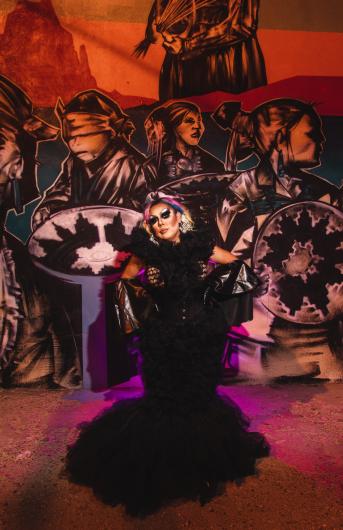 Lady Shug in front of a mural.

“Just having a voice has allowed a lot of people to feel comfortable in their skin, especially people that live on the reservation or that are isolated,” shared Lady Shug, a Diné non-binary drag artist, and activist, over the phone. Lady Shug’s drag style is political; they use their platform to normalize, support, and amplify their LGBTQ2S indigenous community. Lady Shug also recently appeared on the finale of the HBO special, We’re Here, in which drag icons bring their art to small towns. In everything they do, from luminous eye makeup to supporting their indigenous unsheltered relatives, Lady Shug strives to uplift, “I’m just trying to continue to be that beacon of light, trying to break down those boundaries. It might not be me but it might be somebody else that makes it normal—because we always get forgotten.”