Classic Levi’s Jackets Make a Fashion Statement for the Ages

Iconic Levi’s Trucker jackets only get better with age. 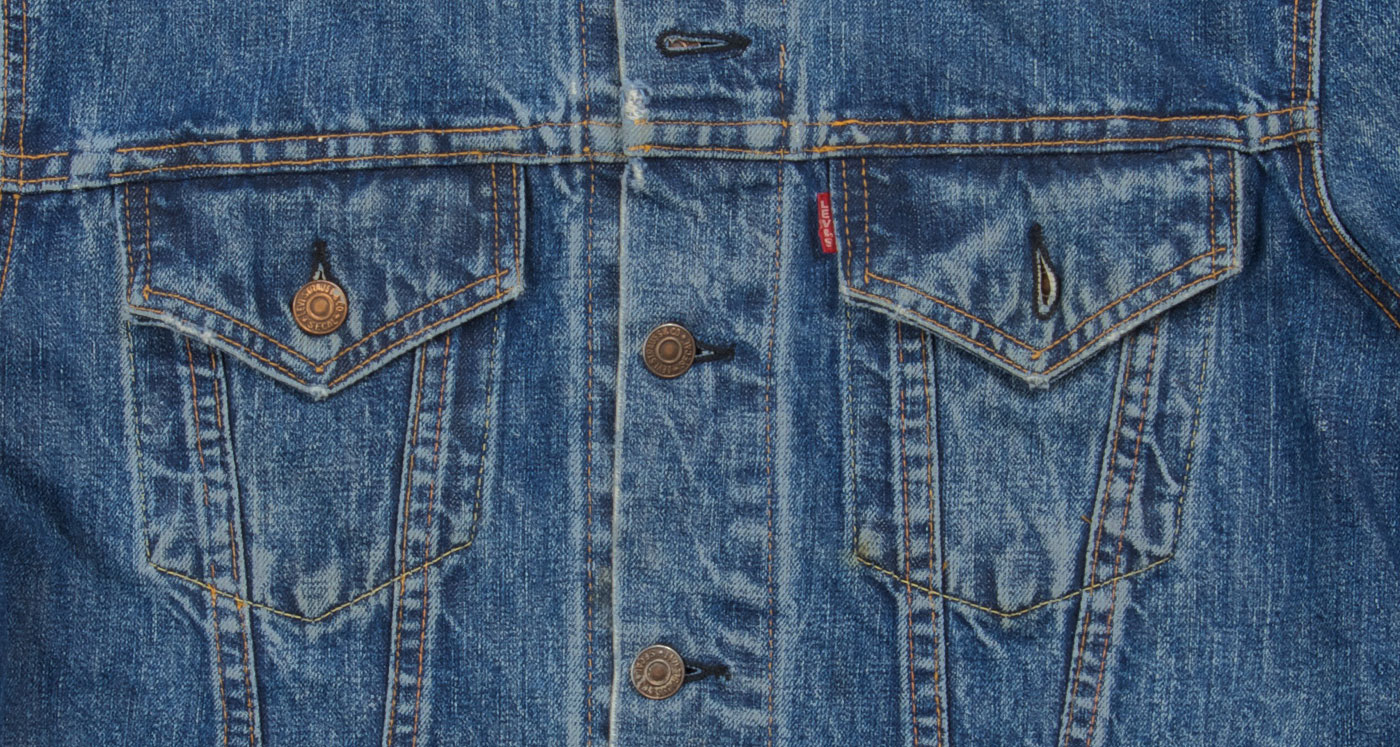 At over fifty years old, Levi’s Trucker jackets are the rare fashion statement that is both timeless and contemporary. 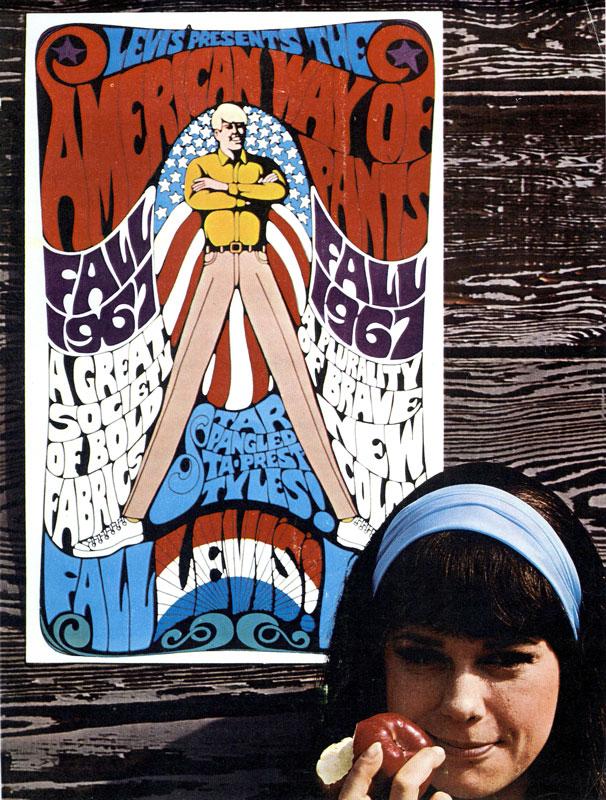 A Levi's sales bulletin from 1967 captures the spirit and aesthetic of the era.

“We continue to represent an authentic, democratic brand that symbolizes youth, freedom and individual self-expression.“

The original denim jacket that evolved into an icon of cool has celebrated its golden anniversary. Levi Strauss & Co. and fans around the world commemorated the 50th anniversary of the Trucker jacket in 2018—an American original that has made fashion history.

Trucker jackets hit the market 50 years ago when a rising youth culture expressed individuality through clothing, music and art. The aesthetic of San Francisco’s Summer of Love is a fashion statement still heard ‘round the world. Just look around at the nouveau hippie styles and the jean jacket that never left.

“Our Levi’s Trucker jacket is definitely a classic. It’s been copied repeatedly by design houses all over the globe,” Panek said. “I love that it’s a global celebration—a nod to the worldwide popularity this original denim jacket has had on fashion. “

Panek recently returned from Dubai, where the jacket’s 50th birthday party was staged at the largest mall in the world.

Yet with its red tab and blue denim, the Levi’s jacket remains an American as apple pie article of clothing that makes a free-spirited fashion statement: “life, liberty, and pursuit of laid-back happiness.” The brand’s iconic status owes in part to a longstanding reputation. Levi Strauss & Co. has been in business for 164 years. In 1870, they manufactured the first blue jeans, known back then as riveted waist overalls.

“We continue to represent an authentic, democratic brand that symbolizes youth, freedom and individual self-expression,” she said. “The Type III is versatile. It can be dressed up or down, and just like our jeans it becomes a canvas.” 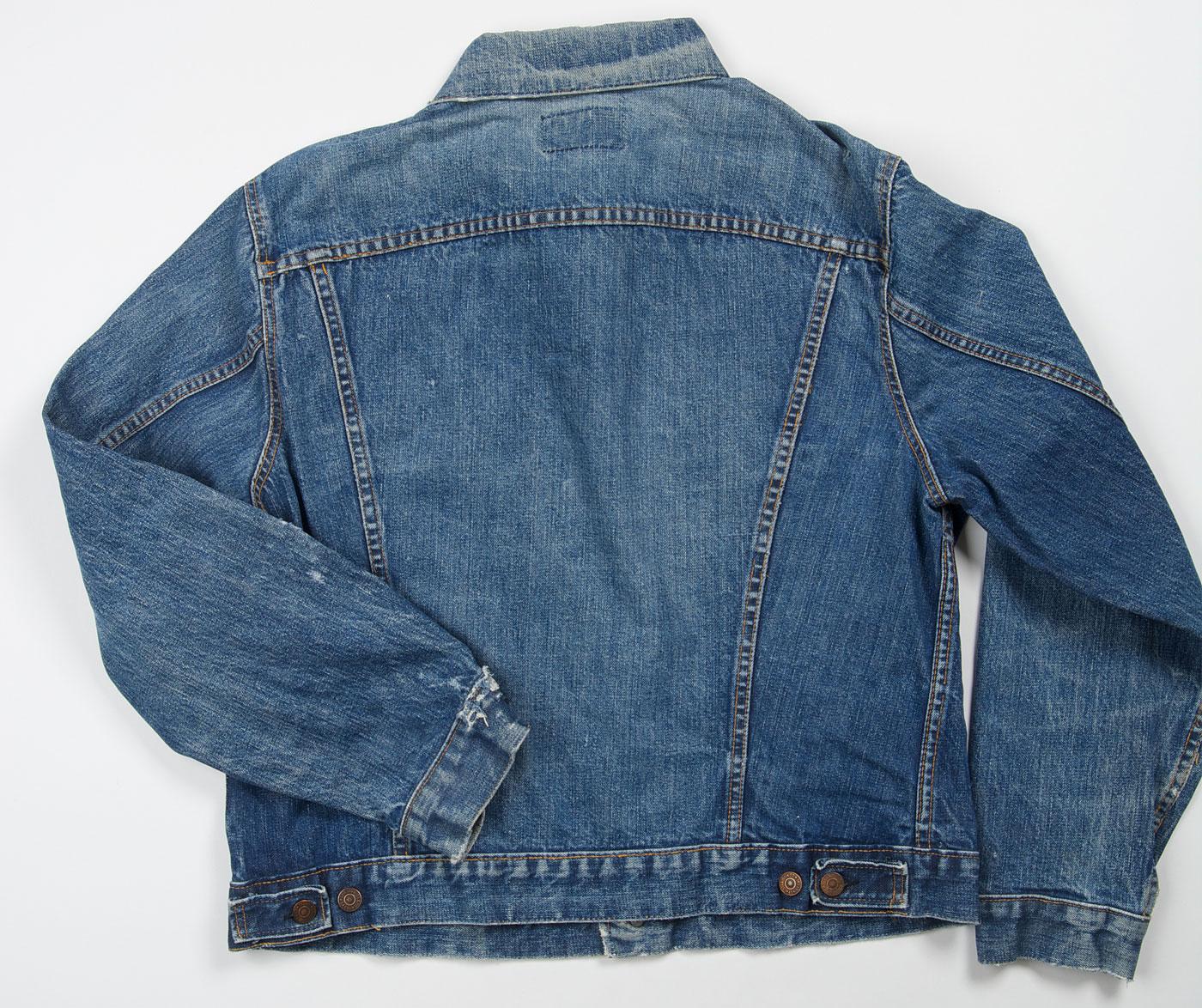 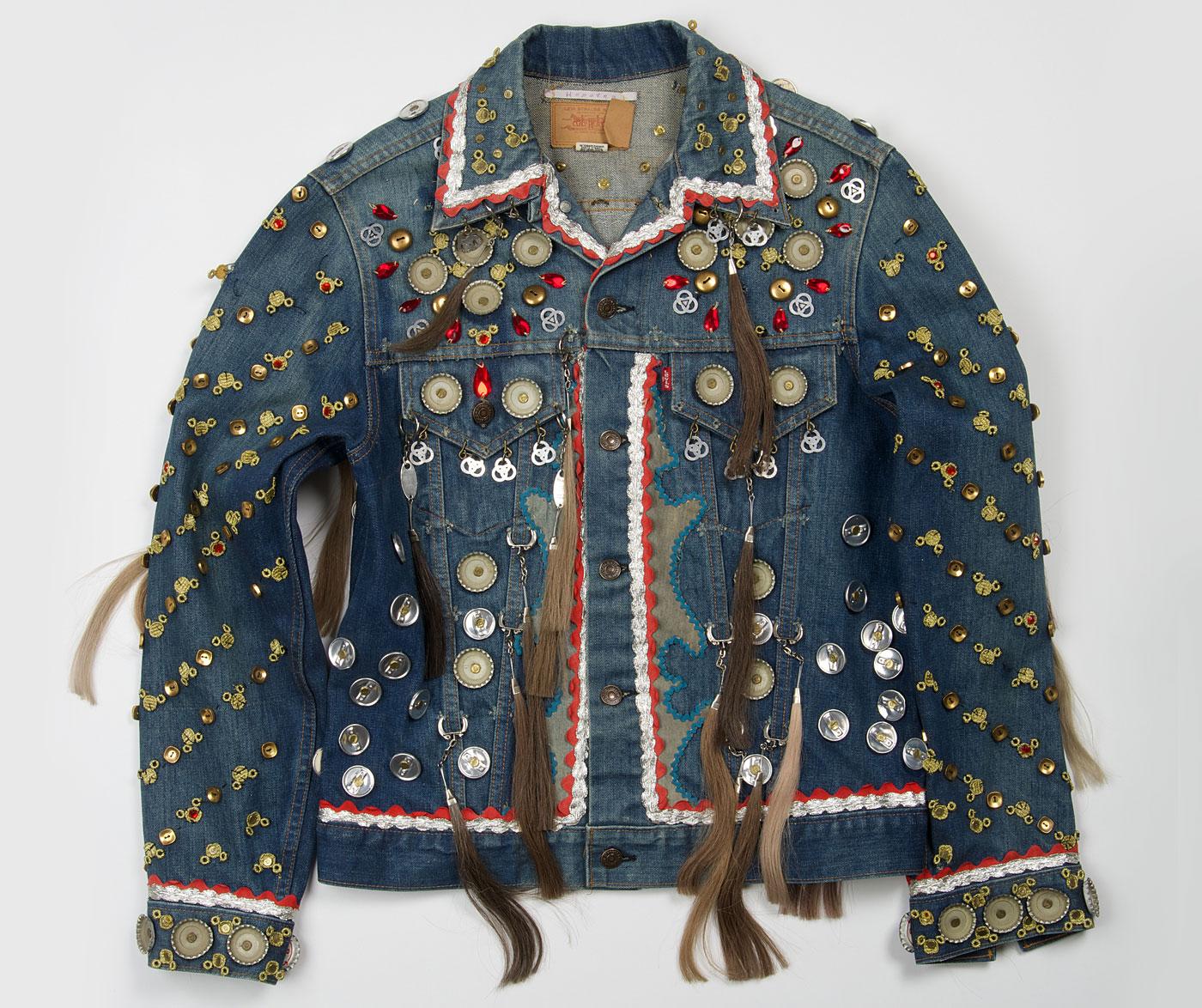 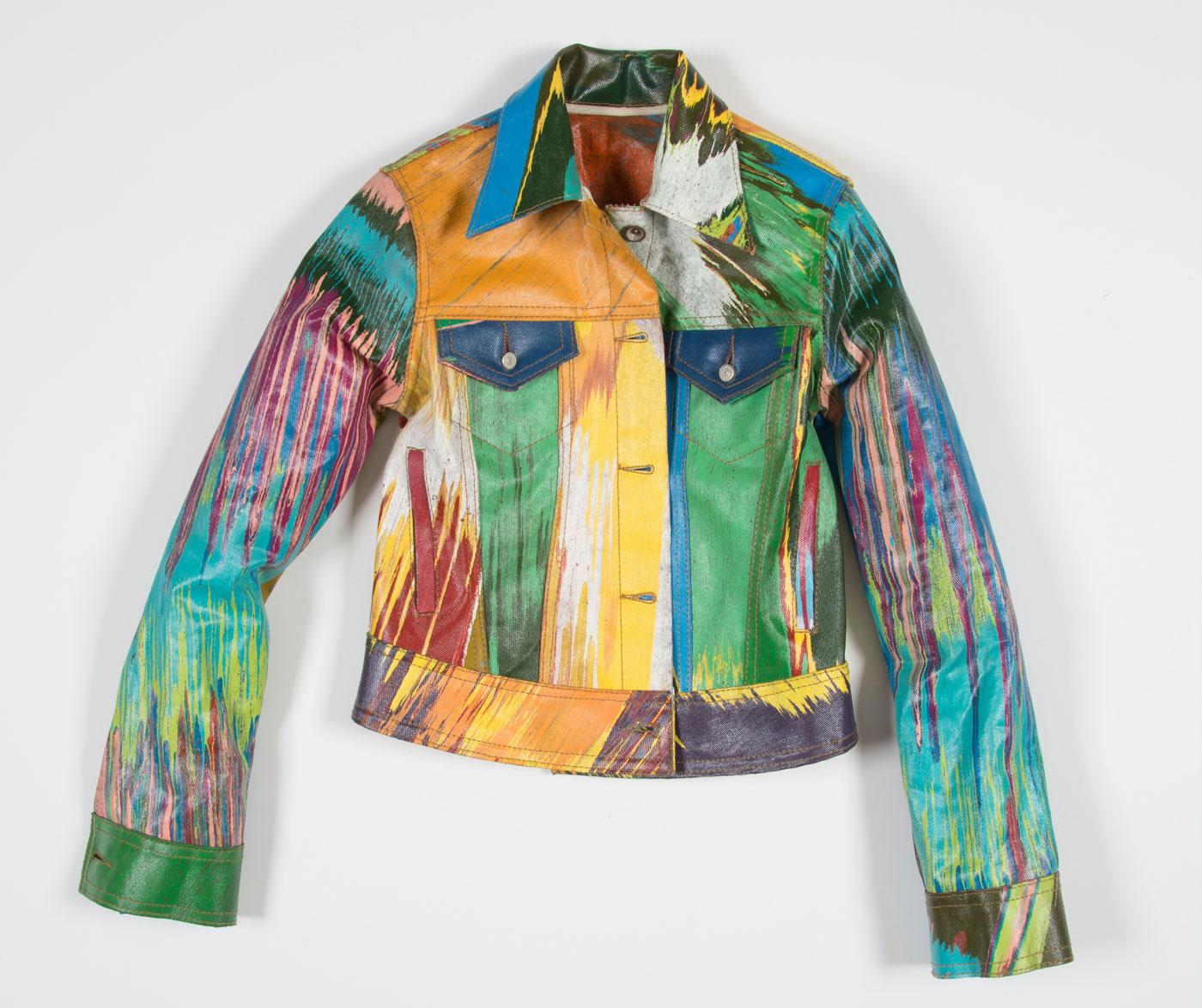 People have been customizing their Trucker jackets for decades, creating their own unique, classic looks.

Fans customize their Levi’s jackets with anything from leather fringe to silk embroidery, rhinestones, rivets and every embellishment in between.

Panek said, “In 1973, we sponsored the Levi’s® Denim Art Contest and invited guests to submit patched, painted, embroidered and embellished Trucker jackets and other Levi’s® denim. The results were amazing and are today considered examples of American folk art.”

The Levi’s “Hair” Trucker jacket adorned with bottle caps and hair-color samples was a winning entry.

To celebrate the 50th anniversary, Levi's displayed some of these unique works in an exhibition in the lobby of their San Francisco headquarters, "including a Garden of Eden-themed Trucker with embroidery and Adam and Eve painted on the sleeves,” said Panek.

Asked at what point do common objects like a Levi’s jacket become art or artifacts, she said, “I think this can happen through personal creativity. Damien Hirst transformed one of the Trucker jackets in our Levi Strauss & Co. Archives into a true showpiece using a spin art technique. He’s a recognized artist, but customizations have been done by Levi’s fans who simply loved their pieces and made them their own.”

The Museum of Modern Art in New York City has exhibited a pair of Levi’s 501 jeans as part of an exhibition titled Items. MoMA recognized the garment as one of 111 articles of 20th century clothing that have made an impact on history. The Cooper Hewitt Museum, also in New York City, added a Levi’s Jacquard by Google jacket to their collection in 2018.

“This inclusion was a nod to the design significance of our Trucker-style Commuter jacket with leading-edge technology,” Panek said. The jacket allows wearers to control their phone through a smart sleeve.

Panek indicated that the Type III jacket likely will continue to evolve as wearable technology becomes the norm. Collaborations with leading designers and style-settlers, like this one, will continue to influence the future of this classic jacket.

But for now, the past is still stylish. For fashionistas fixated on hip style or blue-collar workers concerned with durability, the Trucker is almost indestructible—one of those few favored garments that grow better with age. And worn Levi’s jackets can bring a pretty penny.

At the Quality Mending Company, a vintage shop in Manhattan, Levi’s jackets sell for about $1,000.

“We get Levi’s jackets all the time,” said Karen Bruns of Encore Store. “Most people don’t want to part with their Levi’s jacket. They’re like old friends. But others bring in their old Levi’s jacket and go buy another one. A lot of customers want the worn-in look. We have other denim jacket brands, but Levi's is one of the most sought after.”

Versatility, Bruns said, appeals to those who favor the denim jackets.

“You can wear a Levi's jacket with just about anything, it’s such a classic piece,” she said. “And almost everybody looks good in denim.”

Folk-pop star, Nathaniel Rateliff—who worked as a trucker before his meteoric rise in the music world—is one of a long string of celebrities who’ve popularized the Trucker jacket. Rateliff and his band the Night Sweats wear Levi’s Trucker jackets on stage at major venues like Red Rocks, and their first album cover features the musician wearing a Trucker with nothing but a turquoise necklace underneath.

However styled, wearing a Levi’s jacket makes a statement.

“A Levi’s jacket exudes cool,” said Panek. “It’s also a jacket with a sense of history, and a person wearing it recognizes its authenticity. It’s an original and so is the person wearing it.”