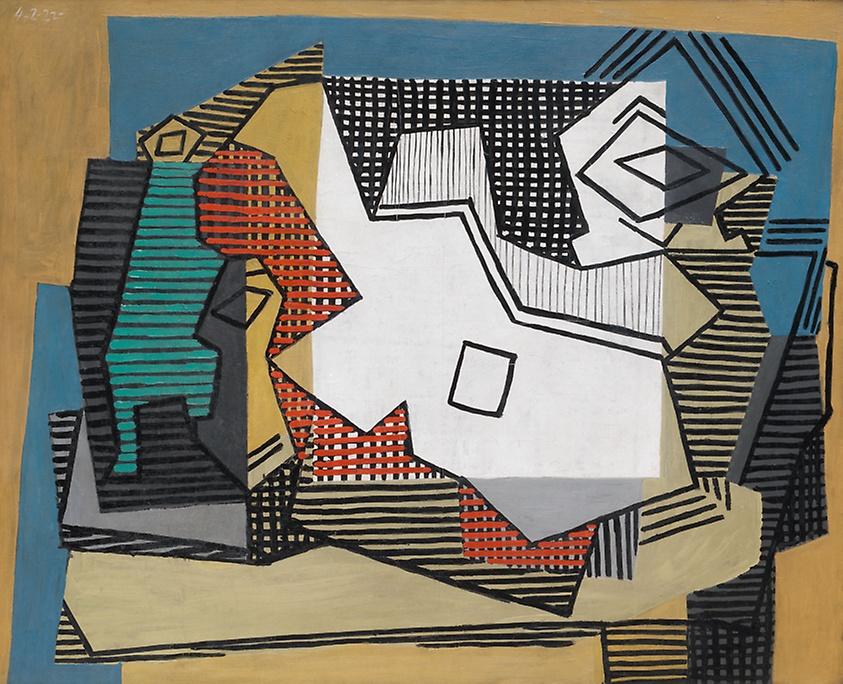 Conservators at the Art Institute of Chicago (AIC) have discovered a treasure hidden in one of their most famous works. Beneath the surface of Pablo Picasso’s Still Life (1922), is another Picasso still life, one that the artist evidently painted over in favor of the composition we’re familiar with today.

Still Life shows Picasso at the end of his Cubism phase, where he experimented extensively with depicting abstracted objects from all angles. It’s easy to get lost in the strong lines, bold blocks of color, and cross-hatched patterning of the composition. Once we step back, we can see the suggestion of a tabletop, with a guitar at the center and perhaps vases or bottles to the left side. Dated February 4, 1922, the painting was once owned by Gertrude Stein, before it was given the AIC in 1935.

As it has aged, the painting has developed wrinkles and ridges in the paint, which conservators discovered was thickly apple with a palette knife, giving the painting rich texture and surface depth. In order to best preserve the canvas and restore it to its original condition, they had to analyze and undo what their colleagues from the past had added to the canvas. Through their process they removed a layer of varish which had become discolored with time, thus revealing the paintings true, brighter colors. They also found layers of overpaint that had been applied to heal the same cracks in the original paint they were examining.

But perhaps most interesting of all, using x-ray, infrared imaging, and paint sample analysis technologies, they discovered an entirely different composition beneath the surface of the painting. This other still life, which depicts a pitcher, mug, and perhaps a newspaper arranged on a chair, is in the Neoclassical style Picasso would embark on in the early 1920s. According the researchers, “The scene was likely influenced by the interiors of Picasso’s home and studio at 23, rue la Boétie in Paris, which provided subject matter for many of his paintings and drawings.”

The artist had obscured the original sketch in a layer of thick lead-based white primer. "This seems somewhat unusual in Picasso's practice, as he often painted directly over earlier compositions, allowing underlying forms to show through and influence the final painting," the research team wrote in a paper detailing their discoveries.

It is of course not unusual for artists to reuse canvases, as this is the beauty of paint and of the artist’s fickle, ever-evolving nature. Through conservation efforts like these, we are now able to better see inside the minds and processes of the greatest artists in history.