Christo: The Artist Who Walks on Water 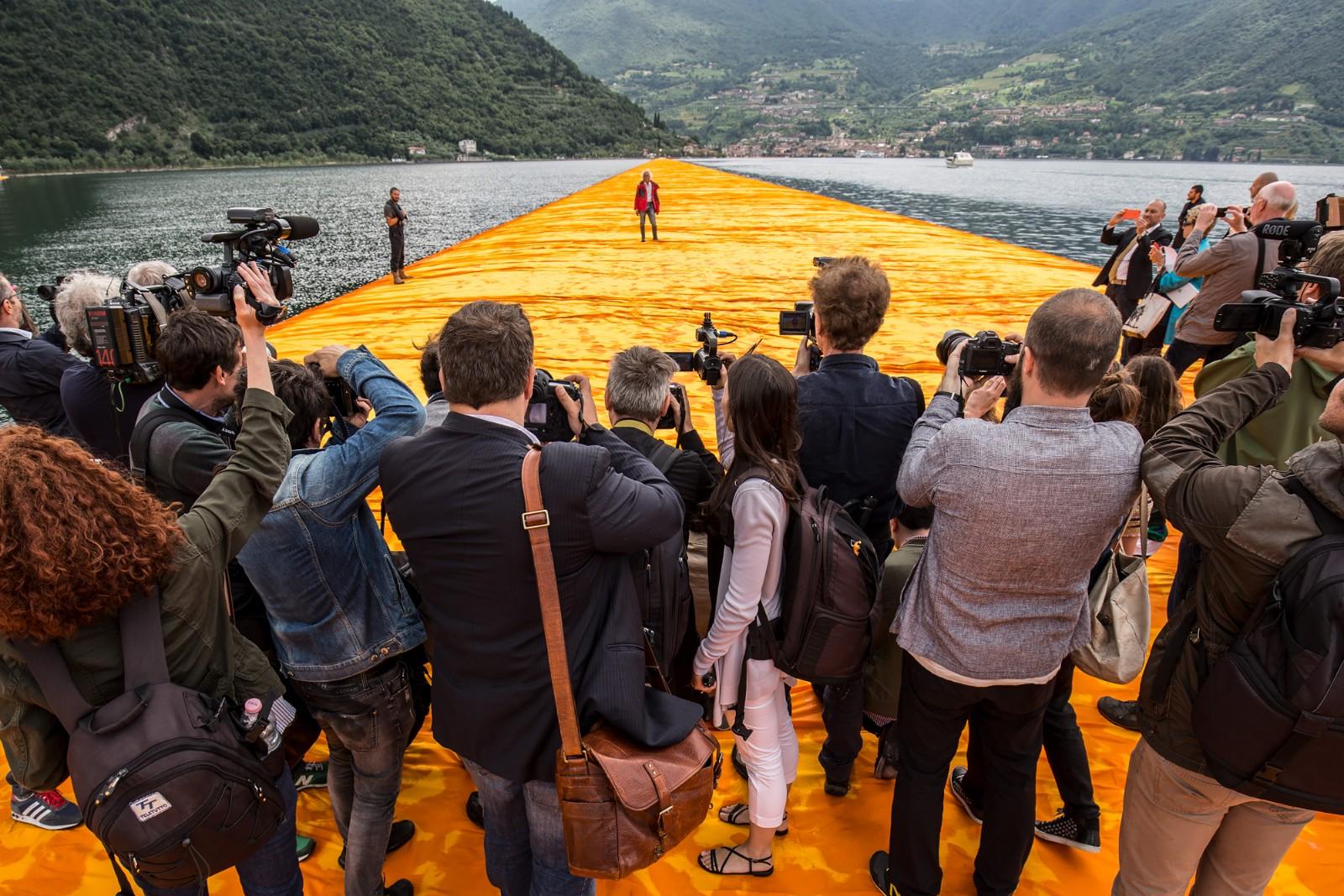 Christo in a scene from Walking on Water

Fuzzy white hair, like a halo, rings the head of Christo, the artist known for creating monumental site-specific works worldwide, but only a few minutes into Walking on Water, a new documentary by the Bulgarian filmmaker Andrey Paounov, it is clear our subject is no angel. Filmed cinema verité style, we follow the feisty Christo from one aggravated moment to another as he struggles against wind, rain, and Italian bureaucracy in order to realize The Floating Piers, his first major project since the death of his love, work, and life partner Jeanne-Claude who died in 2009 at the age of 74. In wistful moments Christo’s references to Jeanne-Claude haunt the film like a ghost. 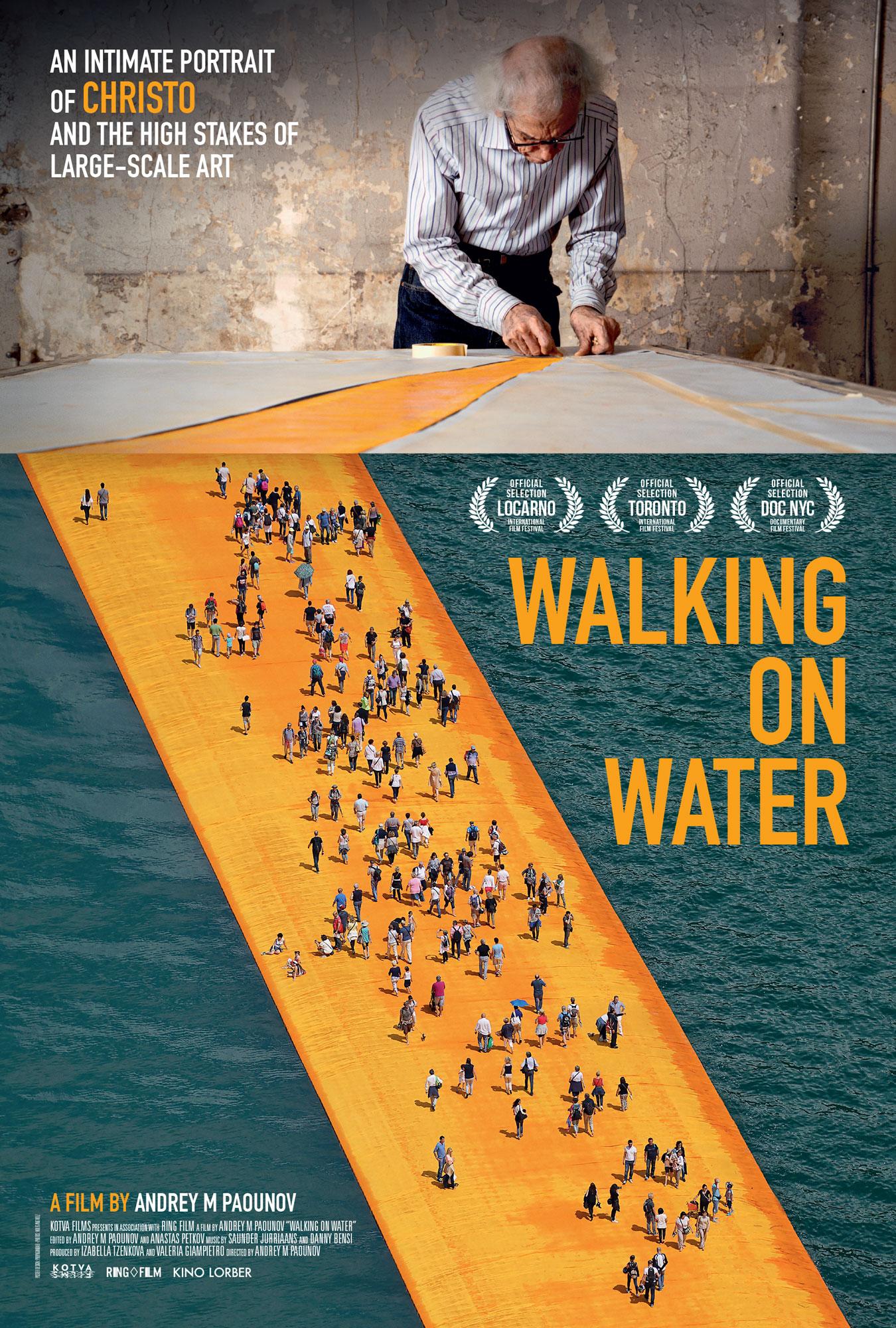 Christo Vladimiroff Javacheff and Jeanne-Claude Denat de Guillebon were both born on June 13, 1935. It was like an omen forecasting their future life together. Although they worked as creative equals on all their projects, only Christo’s name appeared on the finished work up until 1994 due to a perceived prejudice against female artists. After that date, they were well established and confident enough to reveal Jeanne-Claude’s essential role and their works were retroactively credited to both Christo and Jeanne-Claude.

All their projects, from the earliest proposals in the late 1960s to their well documented works including Valley Curtain (1971), Running Fence (1976), Surrounded Islands (1983), Pont Neuf (1985), The Umbrellas Japan–USA (1984-91), Wrapped Reichstag (1995) and the miraculous February 2005 transformation of New York City’s Central Park, The Gates, took years of planning, legal battles, zoning permissions and fundraising before they could be realized.

The saffron-hued, three-kilometer floating boardwalk connecting islands on Lake Iseo with the mainland in Northern Italy had been planned for decades before it was eventually constructed in 2016. Walking On Water allows us to see and feel the emotional toll such a monumental endeavor inflicts on Christo without getting too deep into the weeds on the actual details leading up to the final weeks, days and hours of the public opening.

This film opens with Christo working alone in his decidedly scruffy Manhattan studio scratching with charcoal and pencil on a large collaged image of a giant golden-orange swath zigzagging across a black and white lake. It is one of many original works of The Floating Piers that will be sold to museums and collectors in order to finance the realization of the actual project. In the film, Christo reminds us that, “all the money to fund my projects comes from me. No public money is spent.” This wooing of patrons and collectors also requires an intense marketing effort as we see Christo and his assistants setting up a private exhibition in a gallery-like setting and cajoling a potential buyer who had made a commitment but seemed reluctant to close the deal. 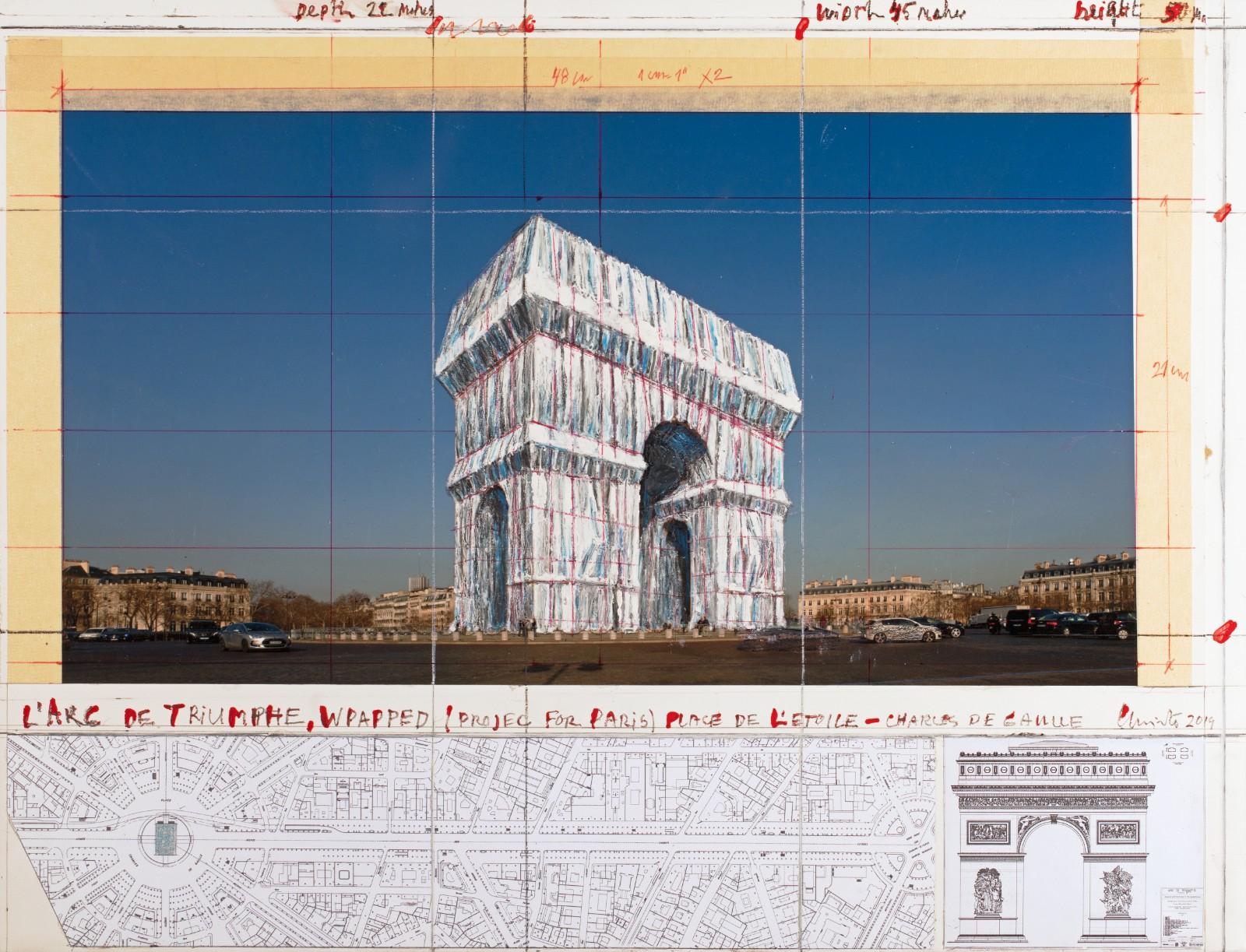 The moments of disappointment are interspersed with joy. As technical difficulties are overcome, Christo walks out onto the first floating section of the pier and in the brilliant sunlight exclaims, “It is fucking awesome!”  He unashamedly, deservedly, basks in the adoration of the crowds seeking selfies and following him like a rock star. The artist, smiling, accommodates all requests while admitting he does not know how to drive or open a computer saying, “I love real things. All my art requires actual, physical engagement…but the works are totally useless. They only exist because Jeanne-Claude and I wanted to make them. then they disappear.” The projects are dissembled shortly following completion, this time after sixteen days during which over 250,000 spectators flooded the town in one day to walk the piers, at one point threatening closure of the site until crowd control was established. 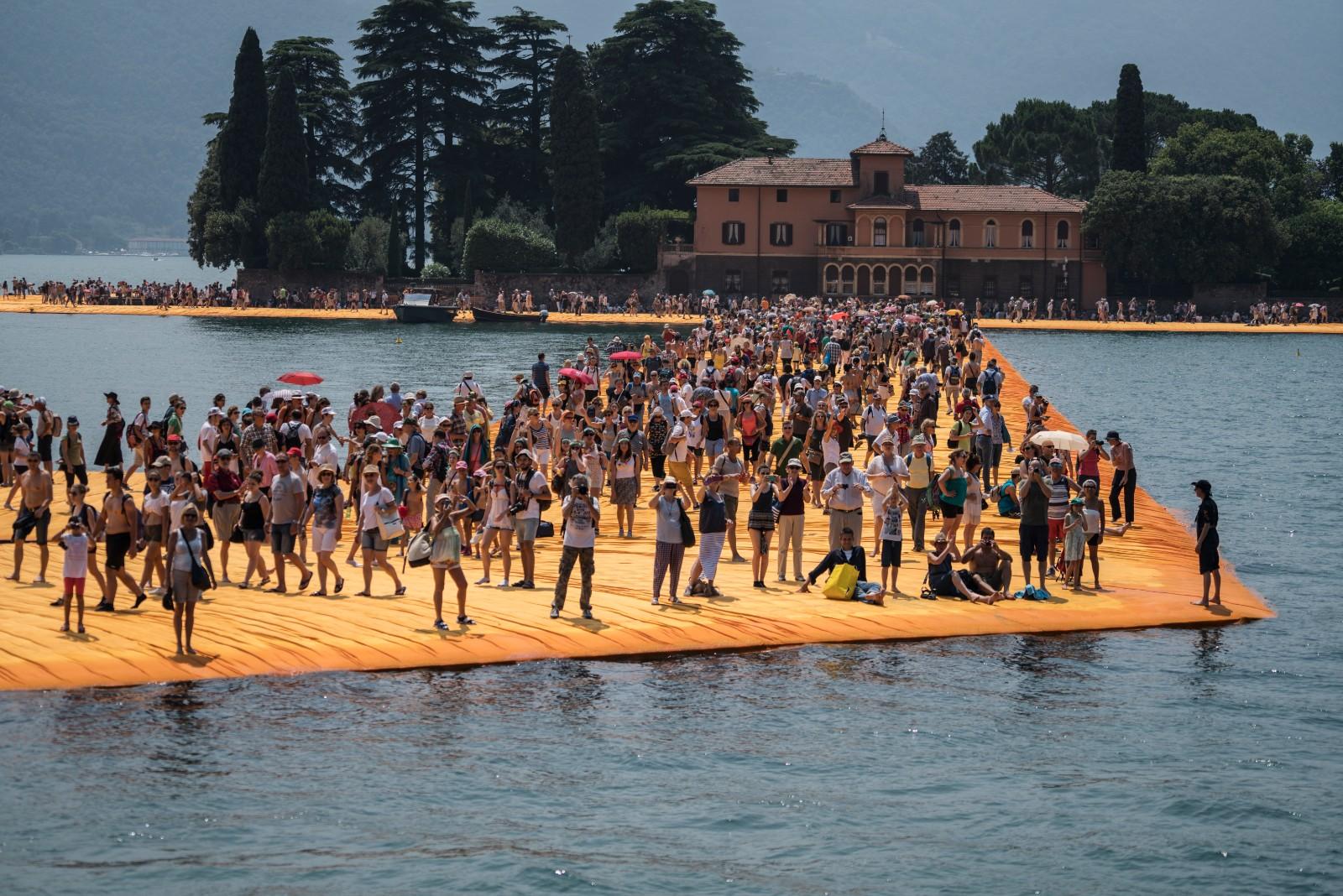 A scene from Walking on Water

The final shots of the film end as it opened, with Christo, alone. This time he is in his hotel room in Italy, packing his bag to go home to New York. He is thoughtful and methodical, turning out the lights as he leaves. In the films addenda we jump forward seven months to the desert sands of Abu Dhabi. Camels lope across the isolated dunes and Christo appears on a windswept crest spreading his hands, envisioning his next project The Mastaba, originally conceived in 1977, now slated to be Christo and Jeanne-Claude’s only permanent large scale work. 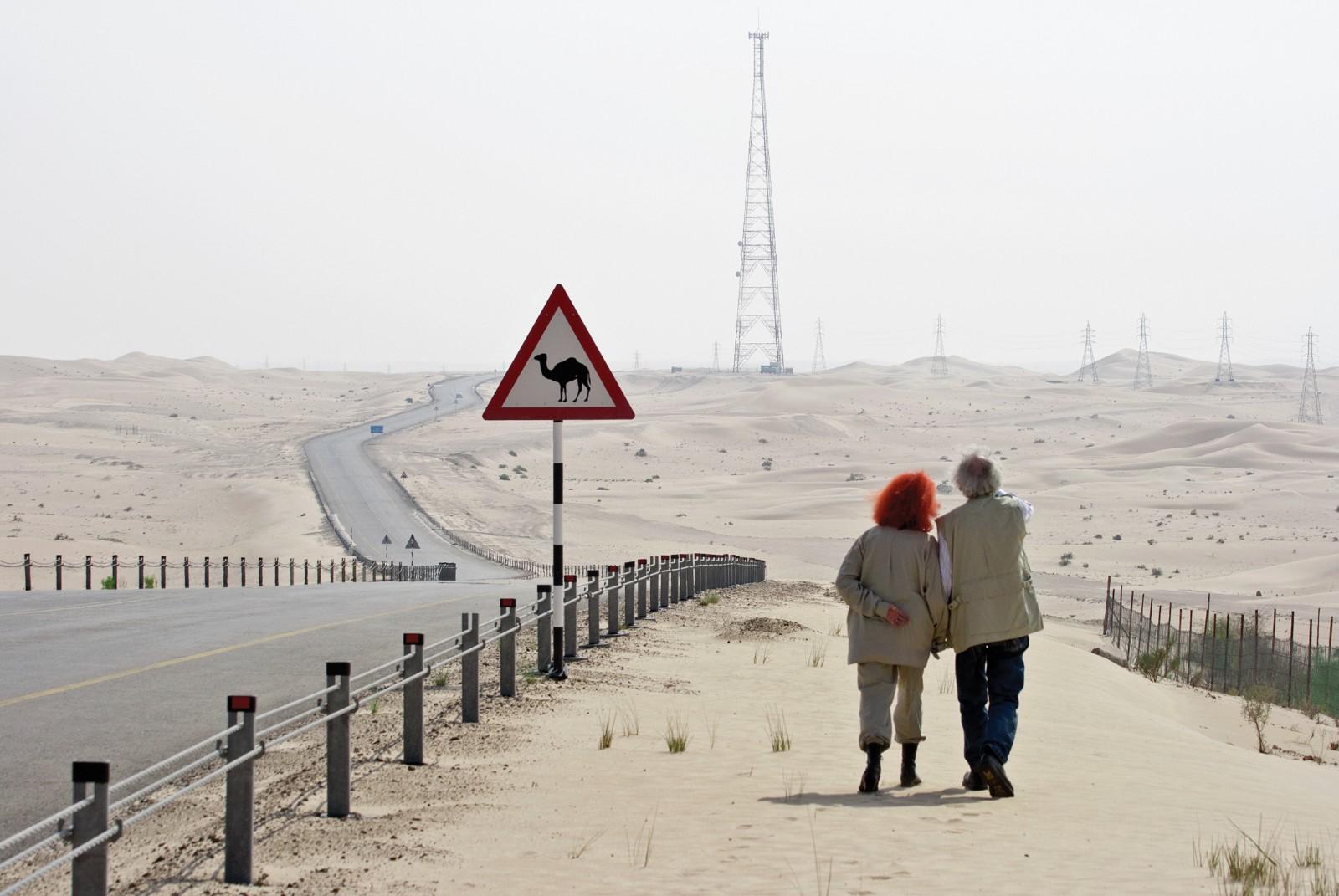 Christo and Jeanne-Claude scouting locations for the site of The Mastaba, October 2007.

Walking On Water provides an unvarnished, intimate view of the artist at work, joining the suite of six films about Christo and his projects made by Albert and David Maysles. Taken together these films document fleeting artistic moments for those unable to experience the real thing.