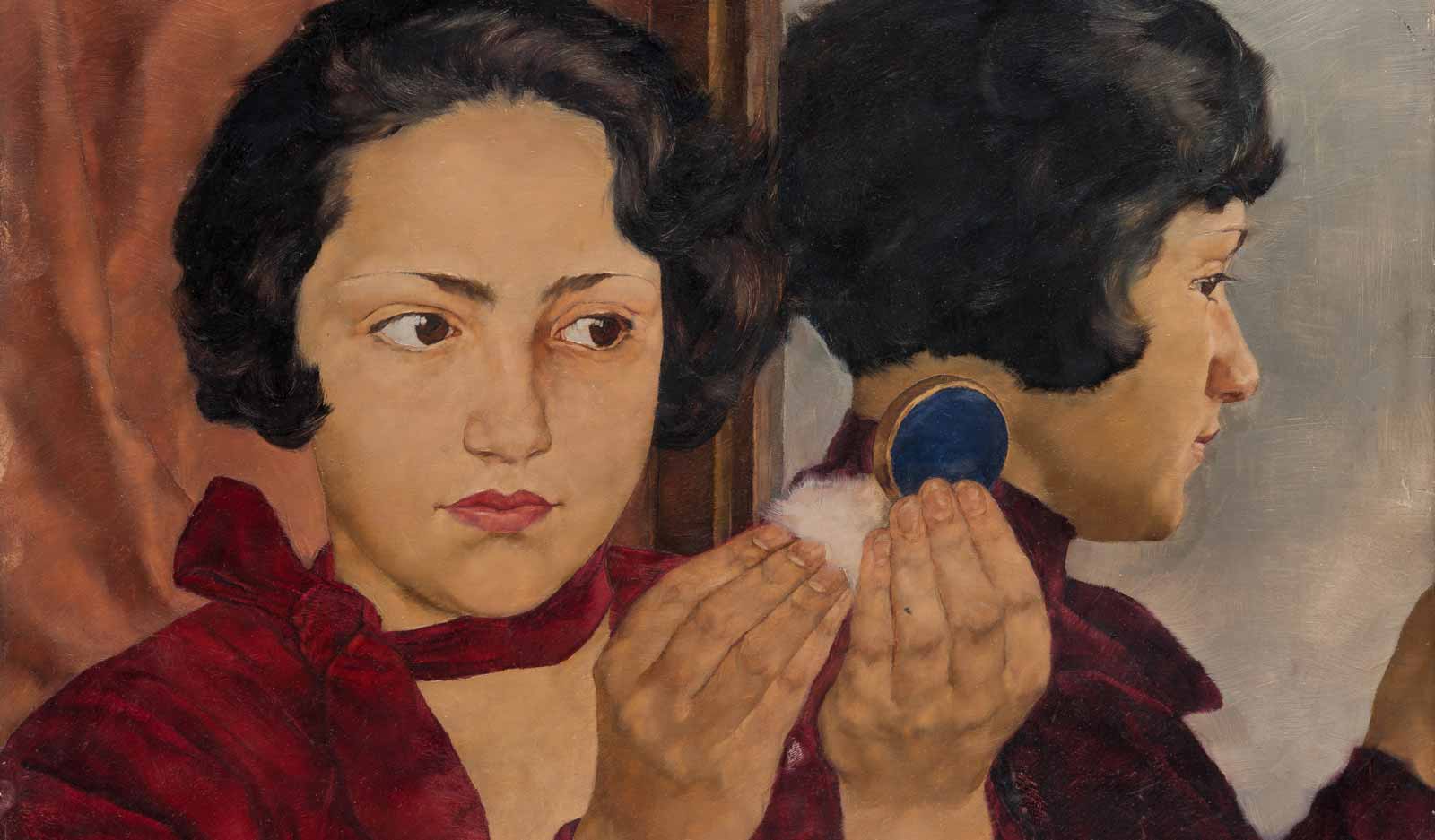 STÄDEL MUSEUM/ BERLINISCHE GALERIE
Lotte Laserstein, Russian Girl With Compact, 1928. Oil on panel.
Lotte Laserstein’s career flourished in the Weimar Republic. But she fled the Nazis and sank into obscurity. Now she has been rediscovered.

Lotte Laserstein’s career flourished in the Weimar Republic. But she fled the Nazis and sank into obscurity. Now she has been rediscovered. 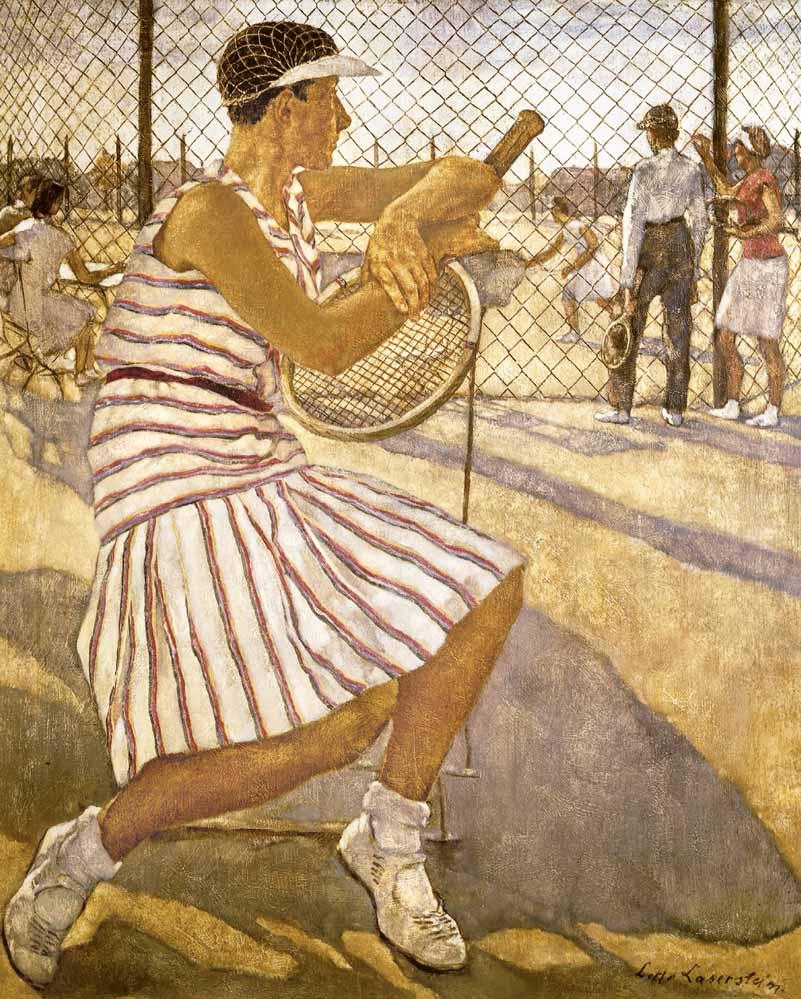 “The first time I saw her paintings in the early 1990s, I was amazed at the quality of her work,”

The sky over Potsdam’s domes and spires is a sultry gray and white. The five well-dressed young people gathered on a wrought-iron balcony to drink beer and eat bread and fruit at a table covered in a white cloth are lost in their thoughts, gazing into the distance, not talking to each other.

The heavy mood captured in Lotte Laserstein’s oil-on-wood masterpiece, Evening Over Potsdam, reflects the time in which it was painted. The year was 1930, and the Roaring Twenties–a decade in which the artist flourished professionally and received much recognition for her work–had given way to the Great Depression. Laserstein, who was Jewish, was forced by the Nazis to close down her painting school five years later. She fled to Sweden in 1937. Her extraordinary body of work fell into obscurity.

But decades later, Laserstein has been rediscovered. A small gallery exhibition in London in 1987 was followed by a 2003 show at Berlin’s Ephraim Palais organized by the Verborgene Museum (Secret Museum), which specializes in promoting the work of forgotten female artists.

Ever since, leading German museums have been eagerly snapping up Laserstein works: Evening Over Potsdam was acquired by the Berlin Nationalgalerie in 2010. Frankfurt’s Städel Museum purchased her 1928 painting Russian Girl with Compact in 2014, and, two years later, Boy With Kasper Puppet (Wolfgang Karger), painted in 1933.

In part to celebrate these new acquisitions, the Städel Museum mounted the exhibition Lotte Laserstein: Face to Face in 2018. With forty-eight paintings from the artist’s Berlin period and her years in Swedish exile, the show has now moved to the Berlinische Galerie in the German capital. From there, it will travel to Kiel in northern Germany.

Anna-Carola Krausse, the art historian who curated the 2003 exhibition, says part of the reason Laserstein’s work was forgotten is that her realist painting style wasn’t avant-garde and isn’t easy to pigeon-hole. Art history after the war in Germany focussed heavily on the abstract, Expressionist and Cubist works of the first part of the twentieth century. Laserstein was not an Expressionist, nor can she be categorized as a New Objectivity painter.

“The first time I saw her paintings in the early 1990s, I was amazed at the quality of her work,” Krausse says. “But when I approached people about an exhibition, many of them had doubts. There were concerns that she wasn’t avant-garde enough, or that she wasn’t political enough.” 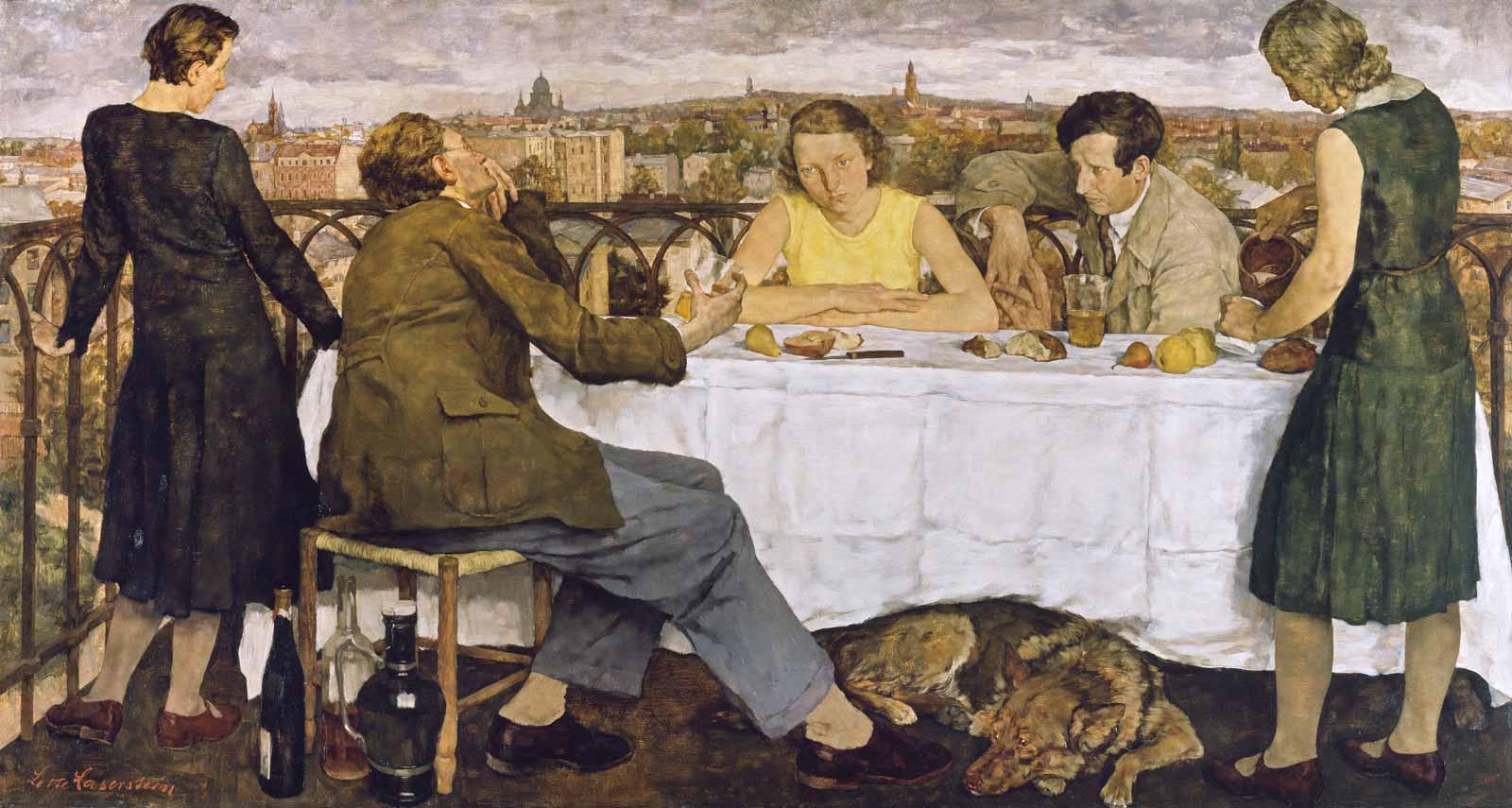 Though her painting style harks back to the nineteenth century, Laserstein’s portraits look astonishingly modern. One of many show-stoppers in the Berlin exhibition is The Motorcycle Driver, a young man in full bike gear, his goggles on his forehead, legs spread apart in front of his machine. In the background, the paraphernalia of his garage is depicted attentively. The textures of his wool and leather clothing are beautifully rendered.

But Laserstein mainly painted women. With short hair and confident poses, they are poised and self-possessed. Laserstein identified with the women she painted: she, too, was strong-minded and independent, and earned her own living. She was among the first generation of women accepted to study at the Berlin Academy of Fine Arts. In 1925, she befriended Traute Rose, who was to become her most important model and muse. 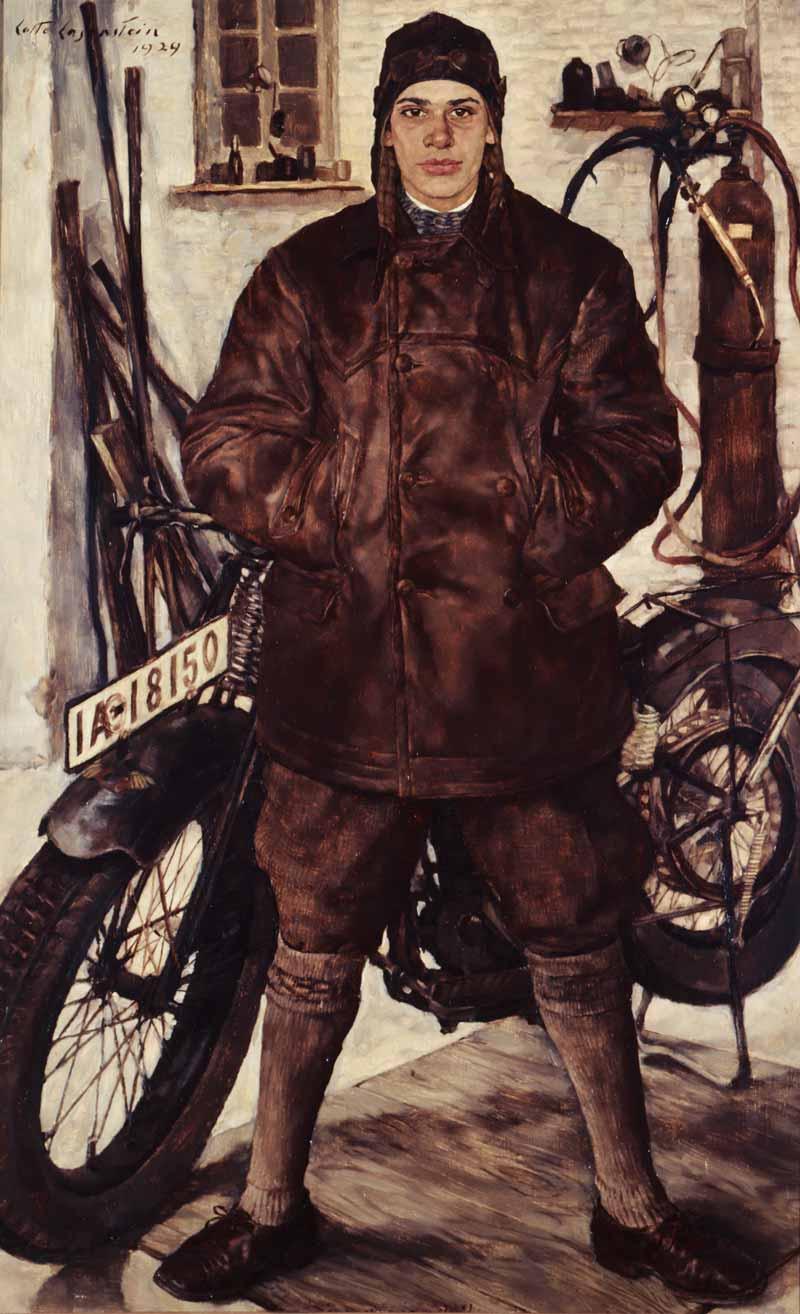 Morning Toilette (1930) shows Rose washing with a sponge in an attic room. In the 1929 painting Tennis Player, the model sits on a chair wearing a sporty white-striped dress and boyish netted cap over her cropped hair, her socks rolled down to reveal athletic calves ready to spring into action at any moment. The interplay of wire fencing, the strings of her racket, the stripes of her dress and the netting of her cap create an energetic canvas.

As with Evening Over Potsdam, Laserstein’s work continued to reflect the times she lived in, even if it is never overtly political. In The Discussion, painted in 1934 after the Nazis seized power, three men converse conspiratorially in a dimly lit attic room. The looming shadows and apparent intensity of their conversation suggest an oppressive, threatening environment requiring secrecy and caution.

After she fled to Sweden, Laserstein’s work became less daringly modern and more traditional. Krausse thinks she missed her home city and felt adrift without her friends, particularly Rose. 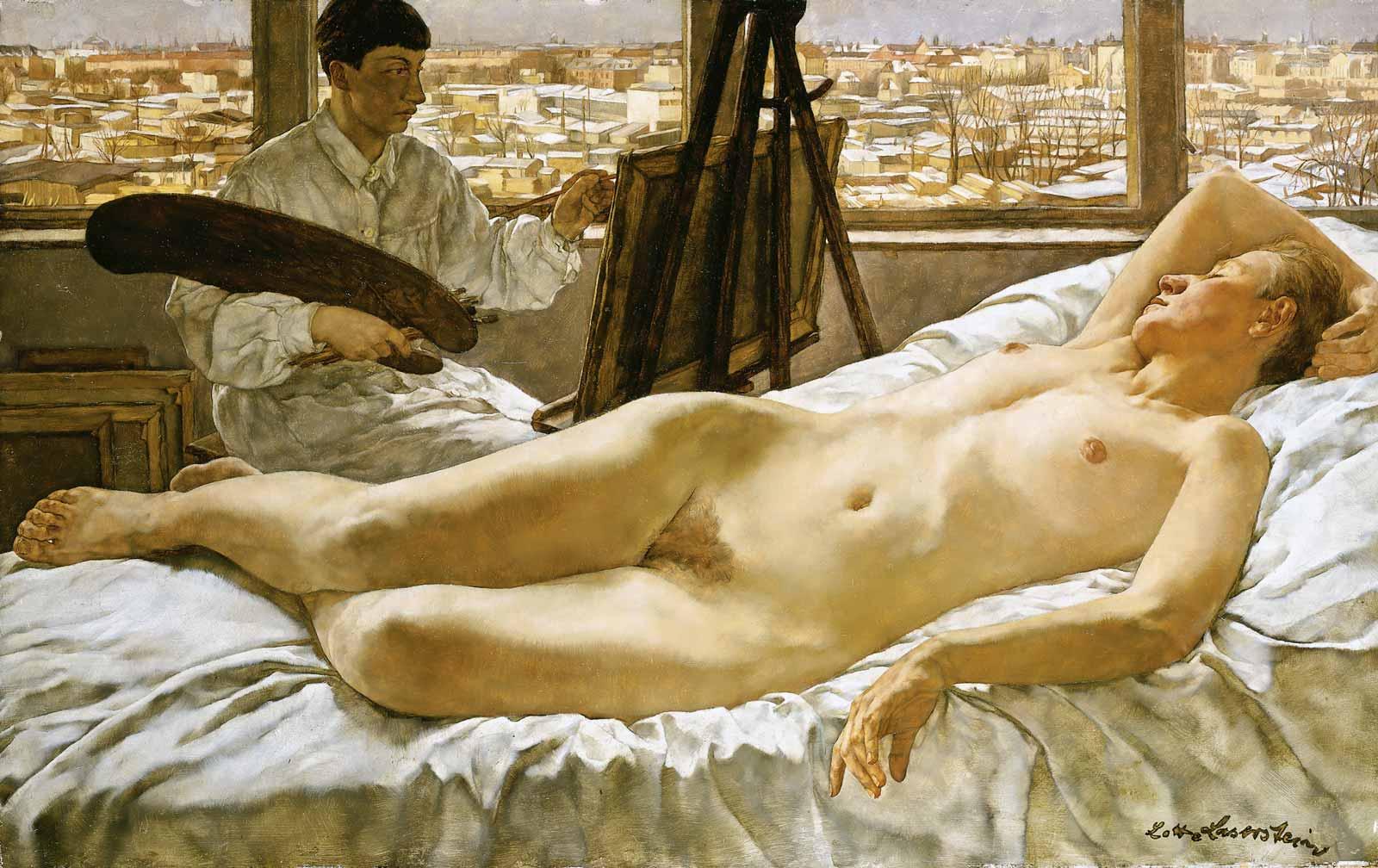 “Laserstein was a Berliner, through and through,” Krausse says. “Berlin was a teeming metropolis. Stockholm was comparatively provincial at that time. Her work in Sweden was more conventional because she had to earn a living with portraits on commission. She started painting still lifes and landscapes because she could sell them.”

She died in 1993 at the age of 94, so she lived long enough to enjoy the critical acclaim accorded to her London show, but missed the current revival of her work in Germany. The word continues to spread: Stockholm’s Moderna Museet is planning an exhibition of her work in 2021 or 2022. And Krausse hopes more Laserstein works will surface on the art market.

“There are still several works I know about that haven’t emerged, and probably many more we don’t know about,” she says.