Beside the original Brillo Box from 1968 and the “Stockholm Type”—boxes from 1990, the exhibition tells the story of how Warhol’s Brillo Box has been both commercialized and served as an inspiration for other artists. To the right is the sculpture Dedication Monument (Brillo) by Alex Da Corte from 2016. 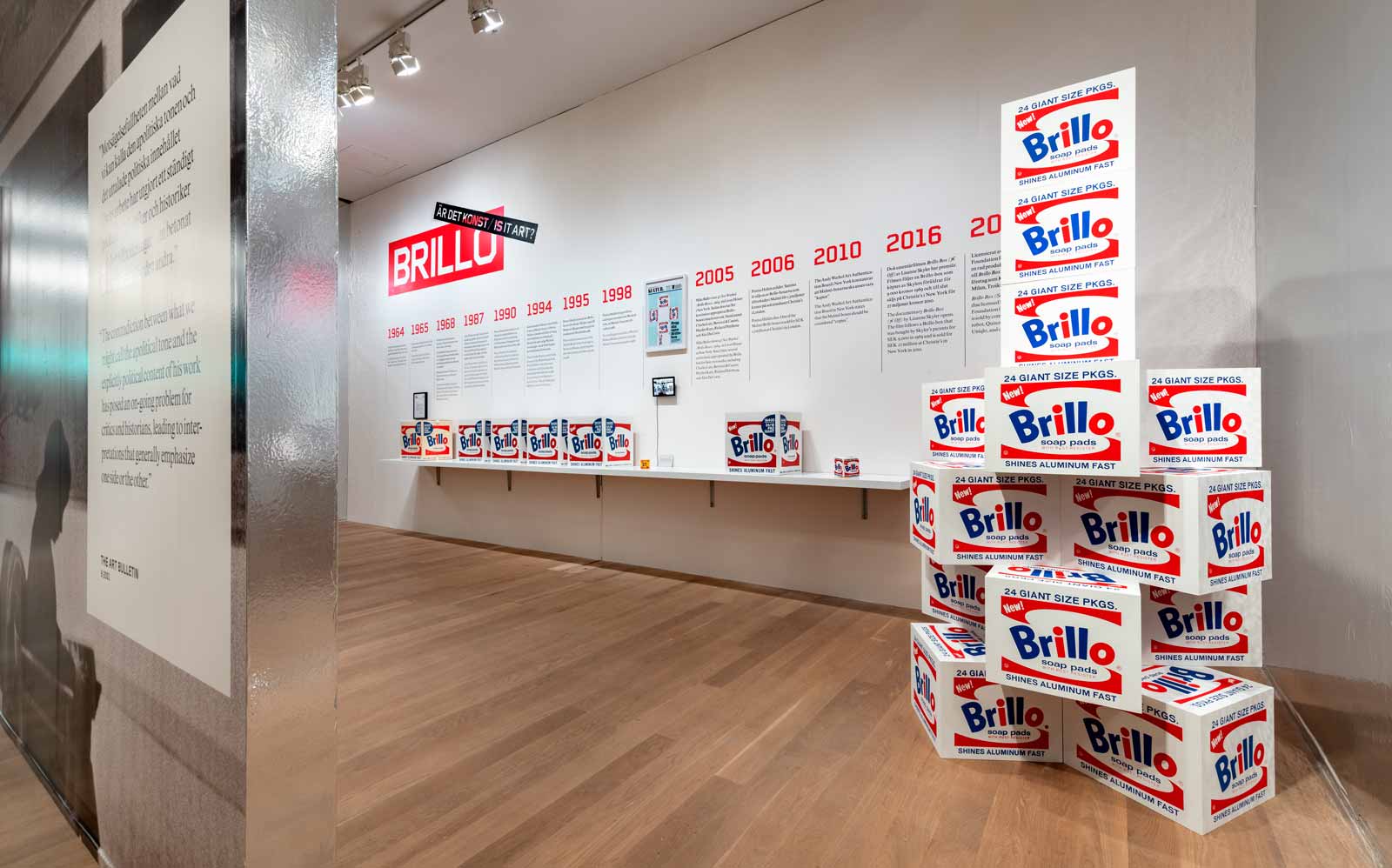 Photo: Åsa LundÉn / Moderna Museet
Beside the original Brillo Box from 1968 and the “Stockholm Type”—boxes from 1990, the exhibition tells the story of how Warhol’s Brillo Box has been both commercialized and served as an inspiration for other artists. To the right is the sculpture Dedication Monument (Brillo) by Alex Da Corte from 2016.
Stockholm revisits its 1968 exhibition of Andy Warhol–the artist’s first solo show in a museum 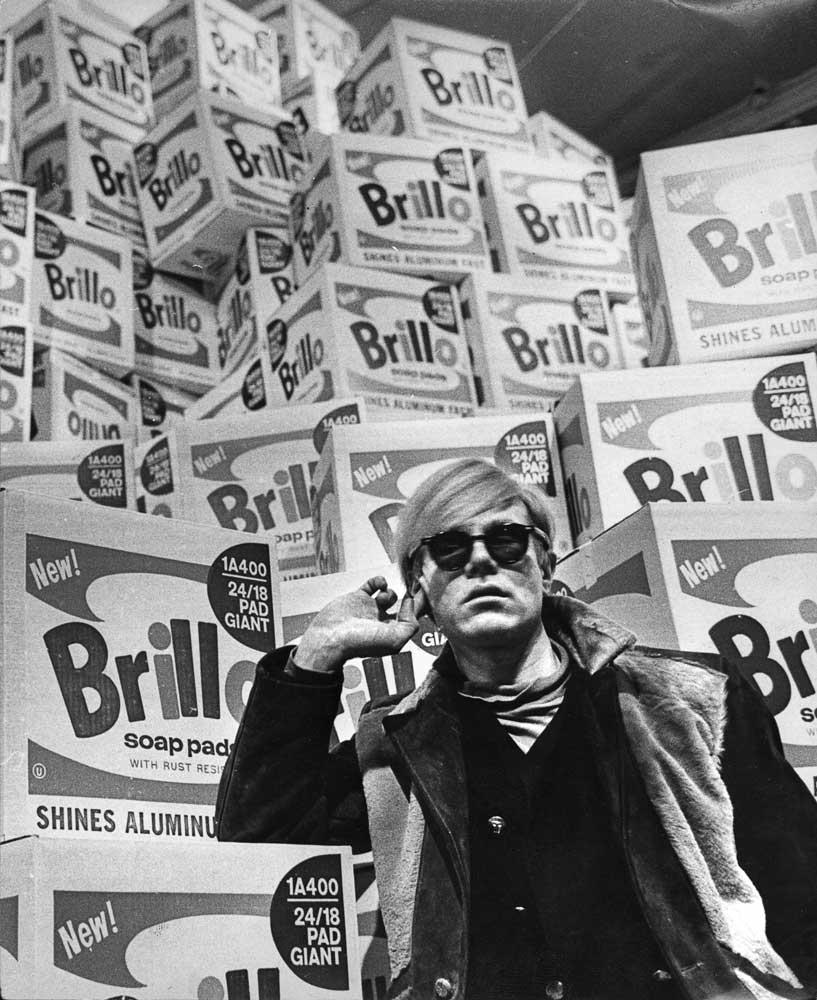 Andy Warhol at the opening of the 1968 exhibition at the Moderna Museet in front of 500 Brillo Boxes that arrived to the museum as flatpacks which had to be assembled.

When the Moderna Museet was planning its 1968 exhibition, it couldn’t afford to ship Warhol’s plywood Brillo boxes from New York.

Andy Warhol’s first solo exhibition at a museum was not, as one might presume, in New York. It was at the Moderna Museet in Stockholm, in 1968, and it laid down the roots for a scandal involving fake Warhol Brillo Boxes that would come back to haunt the Swedish museum decades later.

In 2018, the Moderna Museet revisited the 1968 show–and came clean about those Brillo boxes–in an exhibition called Warhol 1968. Alongside both fake and original Brillo boxes, the show features iconic works Cow Wallpaper, Marilyn in Black and White, and Ten-Foot Flowers, all accompanied by a Velvet Underground soundtrack piped through the exhibition halls. (Warhol managed the band and they were supposed to play at the opening of the 1968 exhibition, but it proved beyond the museum’s financial means to fly them over.)

At the time of the original show, Sweden was firmly in the grip of the debates sweeping the western world–feminism, pacifism and anti-capitalism. This was the year of the Vietnam War, student riots, the assassination of Martin Luther King Jr. and the Soviet invasion of Czechoslovakia. In left-leaning Sweden, Warhol’s shiny celebration of consumerism was controversial. “Warhol has filled me with distaste,” the critic Ulf Linde wrote in the broadsheet Dagens Nyheter.

Others saw Warhol’s work as a critique of capitalism. In the newspaper Aftonbladet, the Marxist critic Bengt Olvang described the artist as “an intense, disillusioned truth-seeker.” This is an aspect that John Peter Nilsson, the curator of the current exhibition at the Moderna Museet, is keen to draw out. “He is not the cynical entrepreneur that many have made him out to be,” Nilsson says. “He showed the underside of the American dream.”

The 1968 show was a public success, with more than 23,000 visitors. The 640-page catalogue attracted international interest. It featured Warhol’s best-known quote–a sentence he almost definitely never uttered. Olle Granath, an art critic who worked on the catalogue, remembers Pontus Hulten, the Moderna Museet’s director at the time, asking him for a pithy Warhol quote. Hulten suggested: “In the future, everybody will be world-famous for fifteen minutes.” Granath said he hadn’t seen the quote in his Warhol material. Hulten paused. “If he didn’t actually say it, he very well could have, so we’ll put that in,” he replied.

The question of what is genuine Warhol and what is not is an important one in this show. When the Moderna Museet was planning its 1968 exhibition, it couldn’t afford to ship Warhol’s plywood Brillo boxes from New York. So Kasper König, who was then an intern at the Moderna Museet (he would later become director of Cologne’s Museum Ludwig and the founder of Sculpture Projects Münster), wrote to the Brillo company in New York asking them to send 300 empty boxes for the exhibition. The company agreed to a price of 20 cents per box, and sent 500, flat-packed, to be assembled by museum staff.

“I don’t think Warhol saw them as art in the beginning,” says Nilsson. Instead, they were exhibition décor–rather like the Silver Clouds that the Moderna Museet was also unable to source for the 1968 exhibition. (Instead, they inflated eight transparent plastic sacks.)

But the story took a strange twist after the exhibition closed, when Hulten had some plywood Brillo boxes made. Then, more than twenty years later, he had a further 105 made for an exhibition in St. Petersburg by carpenters in Malmö–in 1990, after Warhol’s death. He sold forty of these to the art dealer Ronny van de Velde in 1994, together with a document certifying that they were made in 1968. In 1995, he donated six of the Malmö boxes to the Moderna Museet, again falsely certifying that they were produced in 1968. 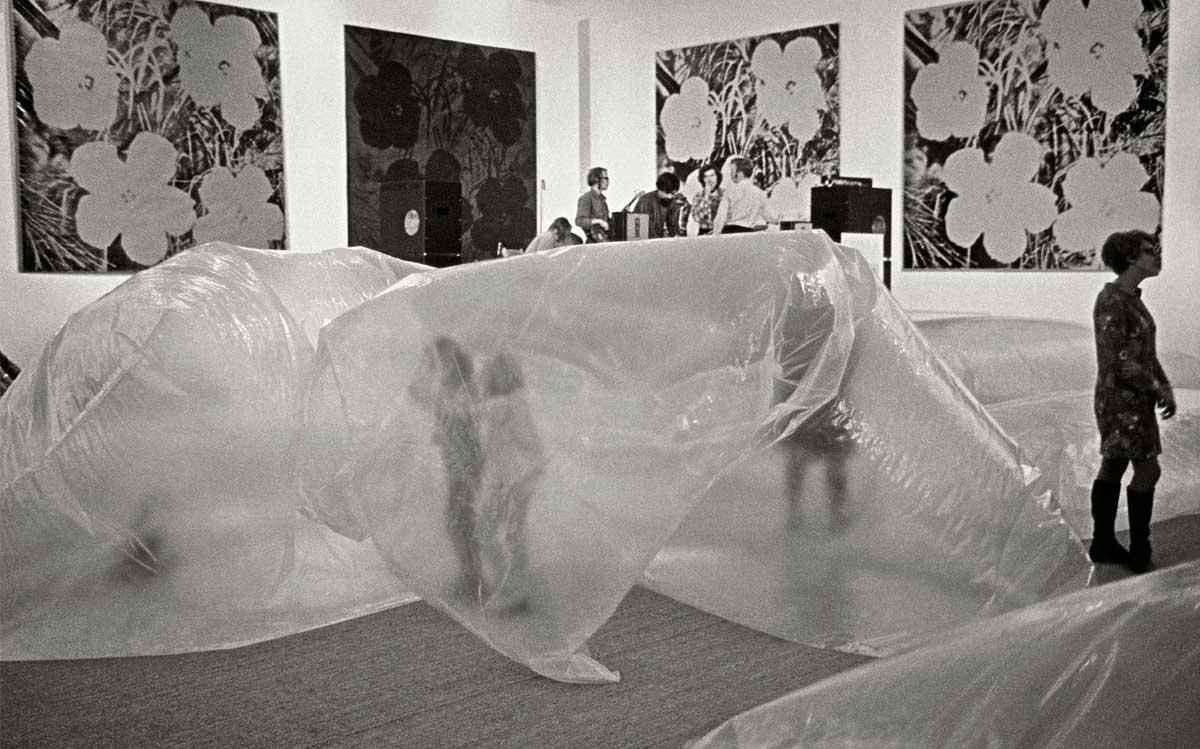 Installation view of the 1968 exhibition at the Moderna Museet, including plastic bag stand-ins for Warhol's Silver Clouds. 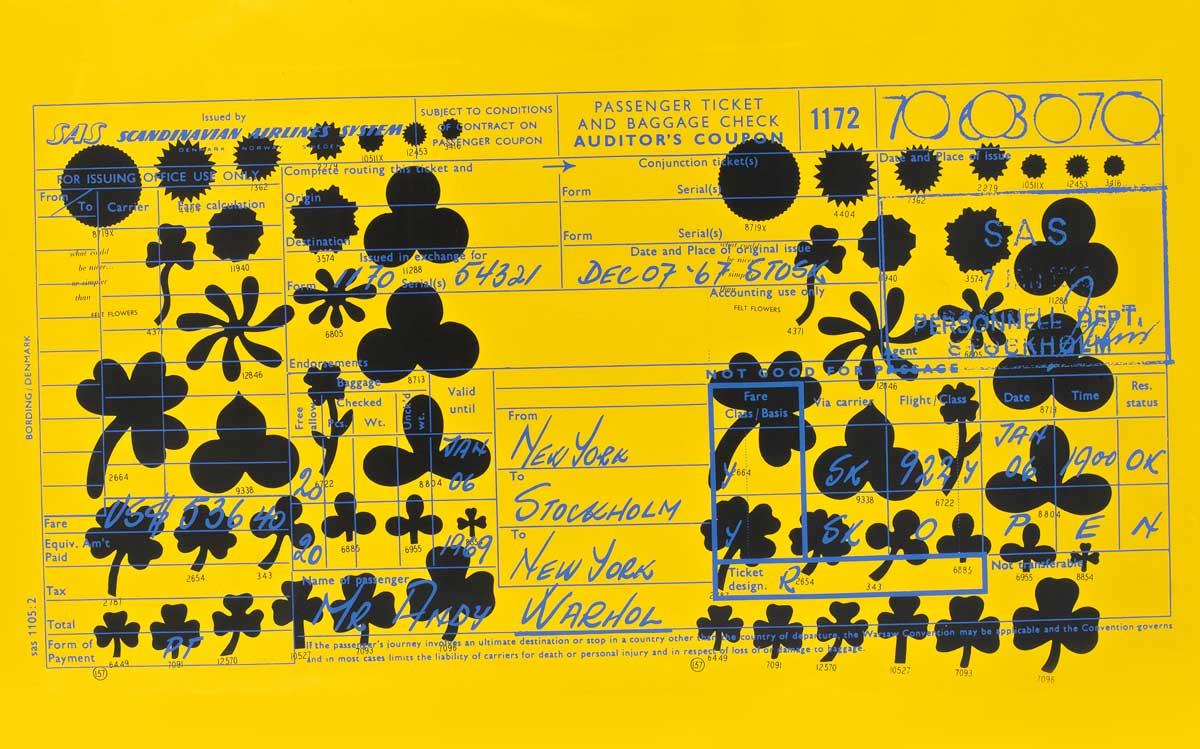 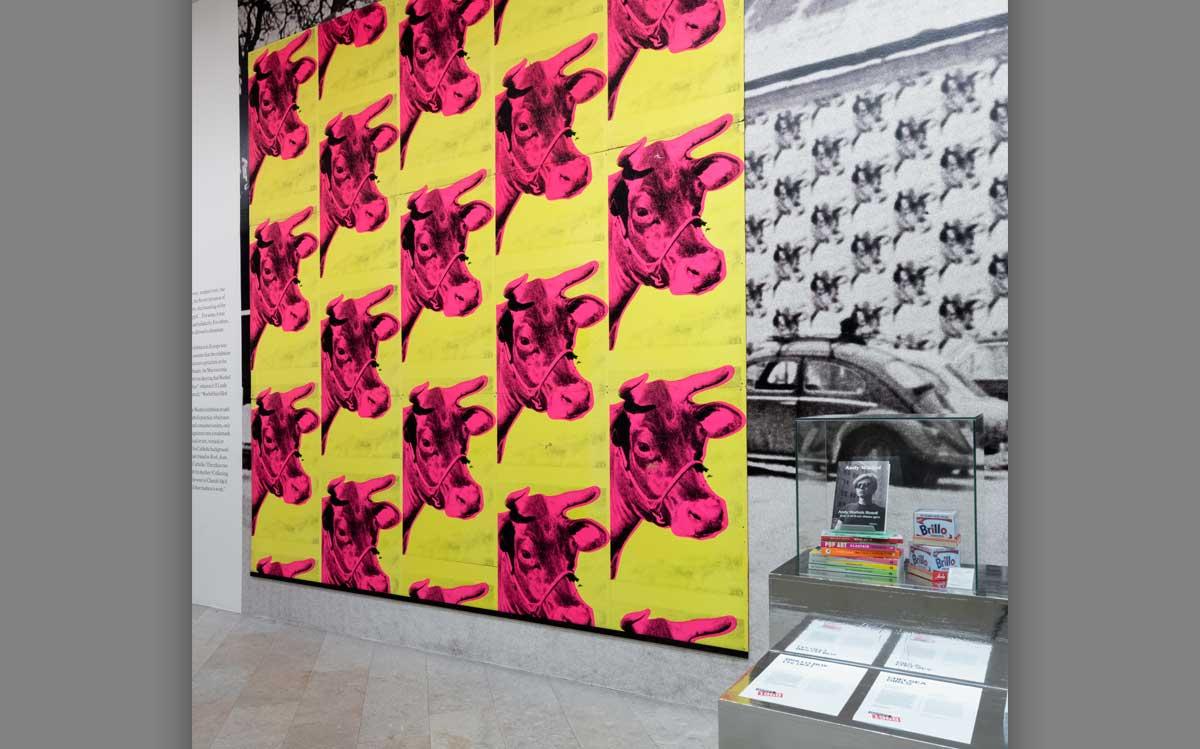 Warhol's Cow Wallpaper on display in the current exhibition at the Moderna Museet. 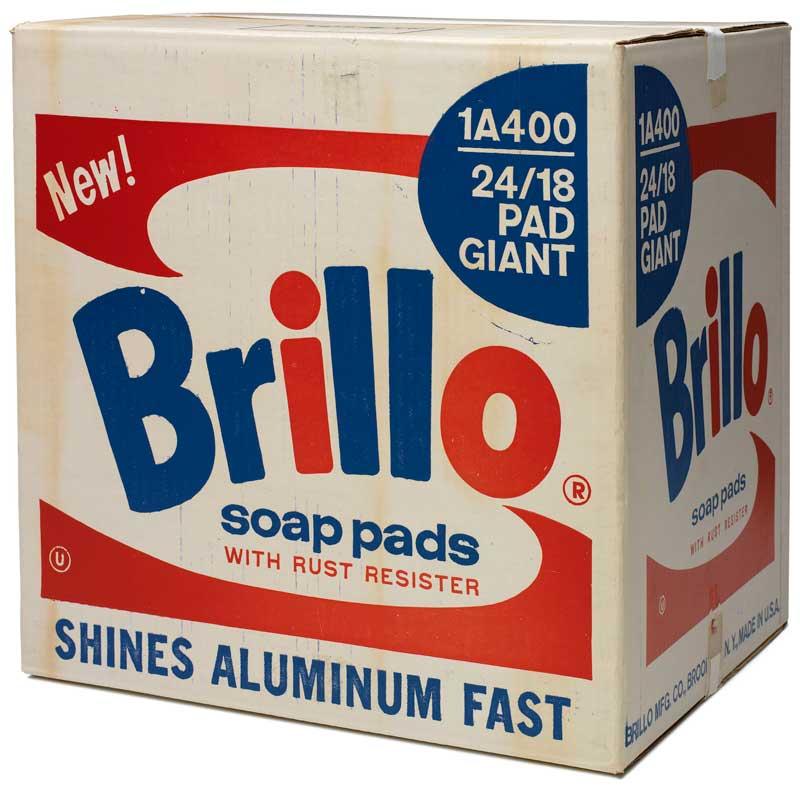 An example of the original cardboard Brillo boxes sent by the Brillo company that were used in the 1968 exhibition.

Hulten’s impeccable credentials–he was one of the most highly respected European museum professionals of the last century and the founding director of the Centre Pompidou in Paris–meant no one doubted his claim that these were original Warhol works.

The Brillo boxes have increased exponentially in value. To accompany the exhibition, the Moderna Museet is screening Lisanne Skyler’s enjoyably humorous and touching 2016 documentary, Brillo Box (3 cents off), which tracks a Warhol box bought by her parents in 1969 for $1,000. In 2010–long after they had sold it–it fetched more than $3 million at Christie’s in New York.

Hulten died in 2006–the year one of his fake Malmö boxes fetched more than $200,000 at Christie’s in London, and a year before the scandal was exposed. “It was good timing from his point of view,” says Daniel Birnbaum, the current director of the Moderna Museet. Finally, in 2010, the Andy Warhol Art Authentication Board in New York said the Malmö boxes should be considered “copies.”

The museum’s current curators still don’t understand why Hulten felt the need to pull off such a scam at the end of his illustrious career.

“He lived in a chateau outside Paris,” Nilsson says. “Maybe he needed money. But Pontus was somehow anarchic. He had a vision that art is more than money and prestige.”

The current exhibition, which runs until February 17, 2019, includes both the original cardboard Brillo boxes and the later Malmö designs. It sparks discussion about copies and appropriation in art; after all, Warhol himself had borrowed the Brillo box and transformed it into art purely by giving it a new context. The original design for the Brillo company was by abstract expressionist painter James Harvey, who had taken a job in advertising to pay his bills.

Since Warhol, many other artists have incorporated Brillo boxes into their work–among them Charles Lutz, Hayden Kays and Alex Da Corte, whose 2016 sculpture Dedication Monument (Brillo) was on display in the exhibition.

None of this excuses Hulten’s fraudulence–as curators at the Moderna Museet are keen to make clear. They felt it was time to confront the incident and expose it–and they are glad to have done so, Nilsson says.

He concedes that “there was a little bit of nervousness in our museum” before the show. “But it is part of our history,” he says, adding hastily: “Not the best part.”