The Visible Vault, Qaumajuk, the Inuit Art Centre at the Winnipeg Art Gallery. 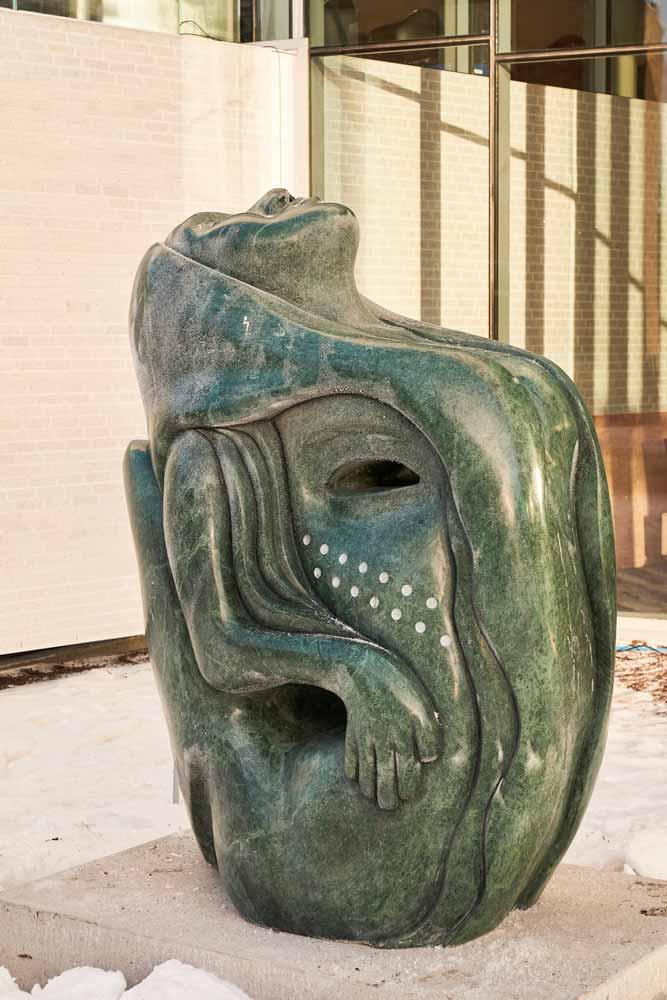 Courtesy of the WAG.

A smooth, undulating white stone structure juts out into the street like an iceberg in downtown Winnipeg. Here, hundreds of miles south of the Canadian Arctic and Nunangat (the Canadian Inuit homeland territories), is the world’s largest collection of contemporary Inuit artworks. This postmodern iceberg is Qaumajuq, the Winnipeg Art Gallery’s newest addition: a 40,000 square foot museum-within-a-museum entirely dedicated to Inuit carvings, works on paper, textiles, new media, and educational initiatives.

Open to the public only since March of 2021, Qaumajuq continues the Winnipeg Art Gallery (WAG)’s decades-long legacy as a progressive and inclusive space for intercultural learning and gathering. Qaumajuq is an Inuktitut word meaning “it is bright, it is lit,” an apt term for the new initiative. It has already emerged as an international leader in decolonization practices thanks to its programming, design, exhibitions, and collections.

Qaumajuq’s architectural design is directly informed by a trip that architect Michael Maltzan, museum director and CEO Dr. Stephen Borys, curator of Inuit art Darlene Coward Wight, and several other team members took to Nunavut early in the center’s planning stages. It was important to everyone involved that Qaumajuq physically reflect the landscape of the communities whose work it houses. Its finished form, white granite, curved glass, and abundant light bring a glimpse of the open spaces and dramatic geography of some of Canada’s northernmost regions to downtown Winnipeg.

Transparency is perhaps the first word that comes to mind at Qaumajuq. The museum’s Visible Vault is a metaphor for its entire ethos. This central exhibition space is an undulating mass of glass, housing thousands of carvings around which the museum staff move in their daily work. Thanks to this vault, visitors are immediately met with the museum’s collection and inner workings right as they enter the space. The vault houses 4,500 stone carvings on multiple levels. And there are an additional 2,900 light-sensitive carvings made of more delicate organic materials below ground. 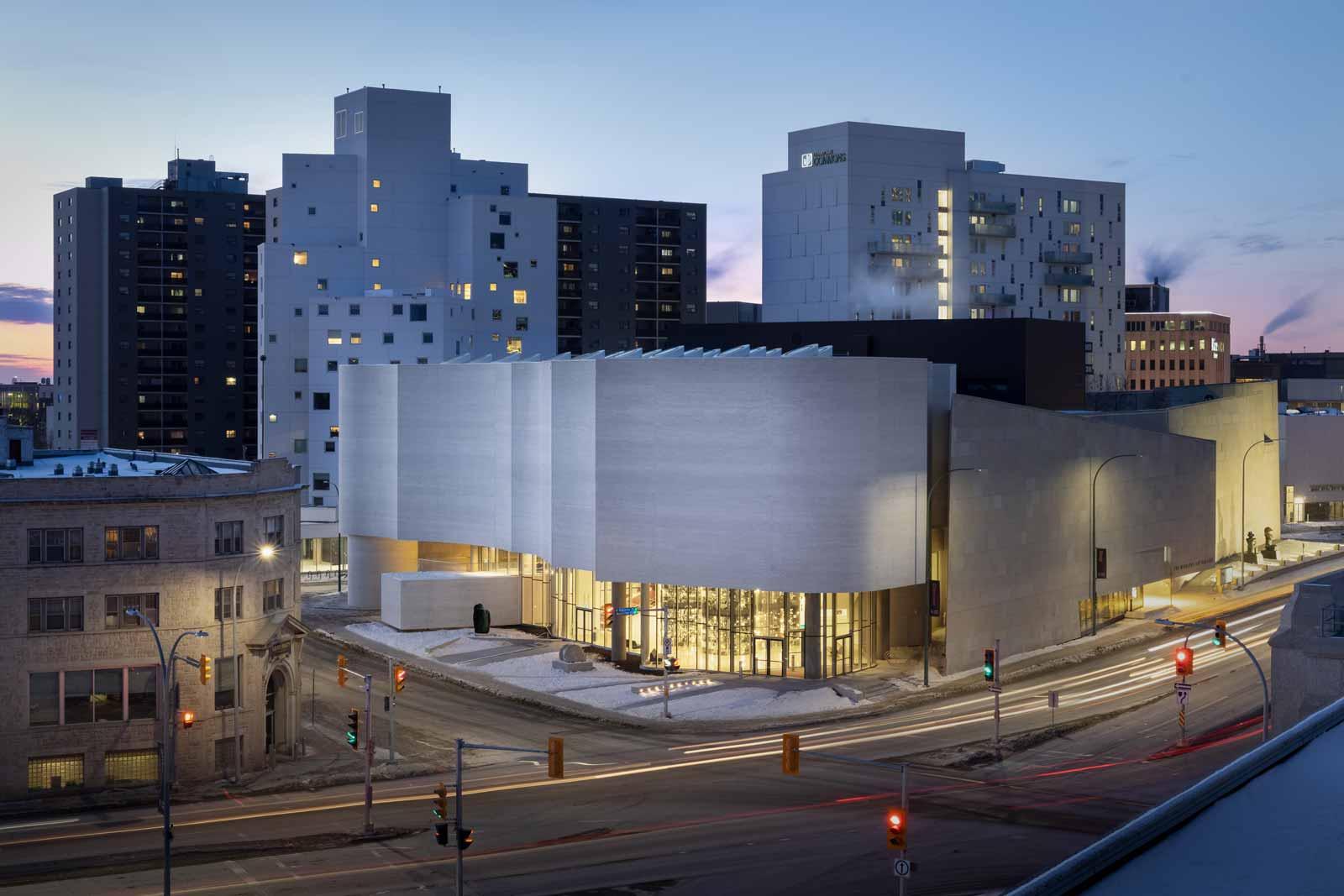 Historically, many galleries and museums have treated Inuit art as a foreign curiosity. Yet, even in the 1950s and 1960s, the Winnipeg Art Gallery understood the need to operate differently as it began to collect and display the works of Inuit artists. The WAG has since been inviting artists from various Inuit communities to tell their own stories within its walls to a global audience.

Since 1961, WAG has featured 215 exhibitions and published fifty-two catalogues on Inuit art. Throughout curator of Inuit art Darlene Coward Wight’s thirty-five-year-long career at WAG, she has participated in ninety-five of these shows.

Part of what makes Wight and her colleague’s work notable is their emphasis on travel and direct communication with the artists whose works they feature. Wight believes that the museum has been so successful in bridging cultural gaps because of their ongoing efforts to maintain dialogue with northern communities and artists. WAG even facilitates classroom-to-classroom connectivity between Winnipeg and Inuit schools. And Wight is excited that, as broadband availability increases in the Arctic, the museum will be able to connect with even more artists, students, and communities in real-time.

Wight is proud of the collection’s rapidly growing digital presence. Launched in early August, vault.wag.ca allows even those unable to visit Winnipeg to explore 150 of the museum’s pieces in depth.

The site condenses extensive research into the works displayed in the vault in the form of descriptions, biographies, and stories told on video by Inuit curators and researchers. Qaumajuq’s digital presence is arguably among the most thorough, navigable, and accessible in the museum realm.

The WAG has also partnered with a local tech company to make the collection even more accessible to visitors onsite. While some of the sculptures in the Visible Vault are high above eye-level, digital touch screens will soon allow people to zoom in and access information about every single work in the vault. 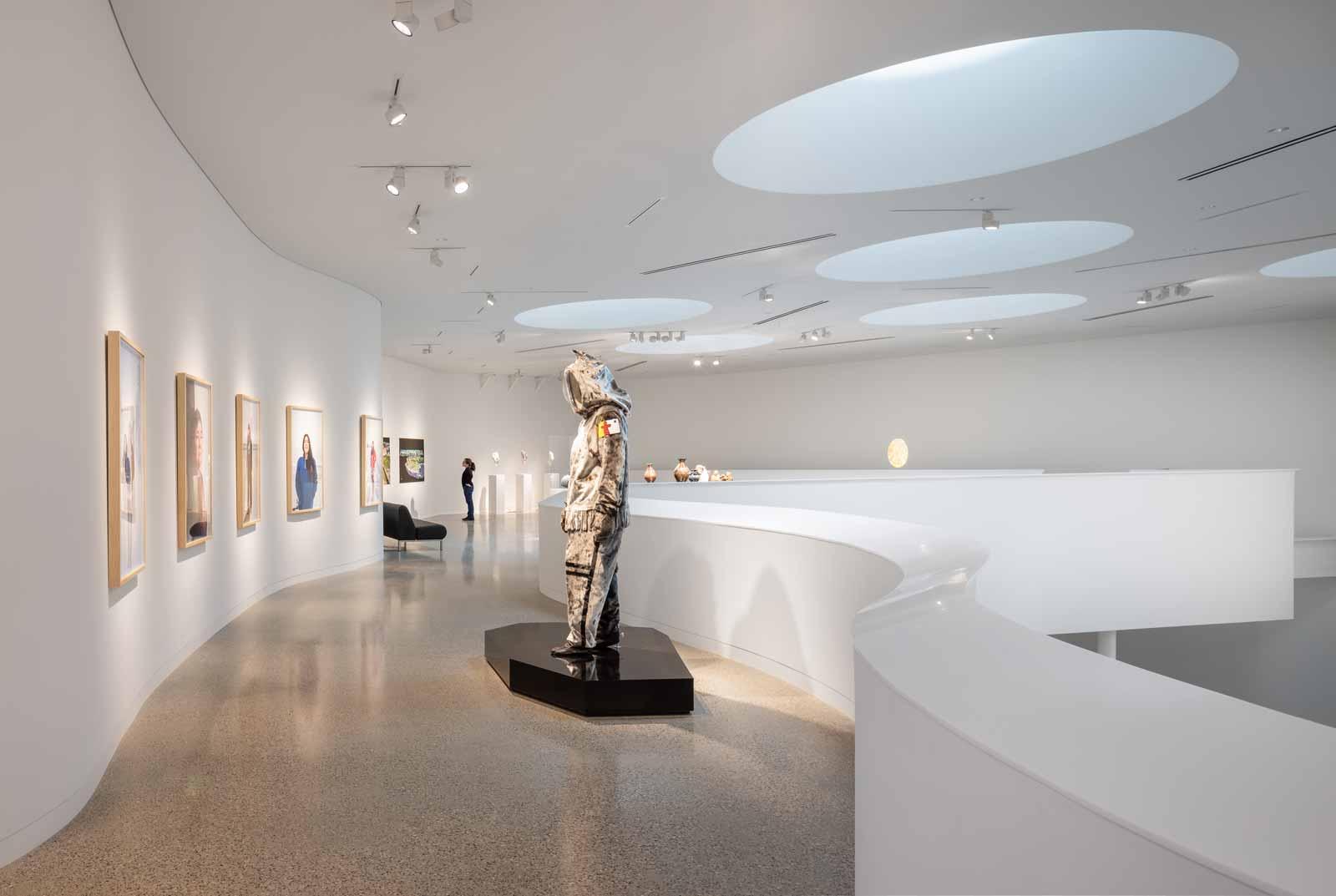 One of Qaumajuq’s inaugural exhibitions is INUA—meaning “spirit” or “life force” in several Arctic dialects. Pieces by more than ninety artists from Indigenous arctic regions (in Canada as well as Alaska and Greenland) fill the museum’s bright and vast main gallery.

The exhibition seems to exemplify much of what makes Qaumajuq so exciting: it brings together a wide variety of artists both past and present, working in a multitude of media—from the graphic prints by Ningiukulu Teevee, to the textile pieces of Maata Kyak, to the films of Glenn Gear— all with the aim of sharing their intergenerational, often intangible, stories.

Another of the museum’s most striking pieces is also one of its most public: the massive sculpture outside the building by Kinngait, Nunavut artist Goota Ashoona. Ashoona carved the piece out of Guatemalan Verde marble that closely resembles materials local to her. The work, titled Tuniigusiia/The Gift, celebrates teachers and speaks to the transfer of knowledge between elders and youth.

The piece combines narrative imagery that tells the transformative story of the sea goddess Sedna—who became a mermaid when she defied her father’s orders to marry before she was ready—with anthropomorphic forms and undulating lines that call to mind the Arctic Ocean. Wight says that it has been stopping people in their tracks outside the museum. 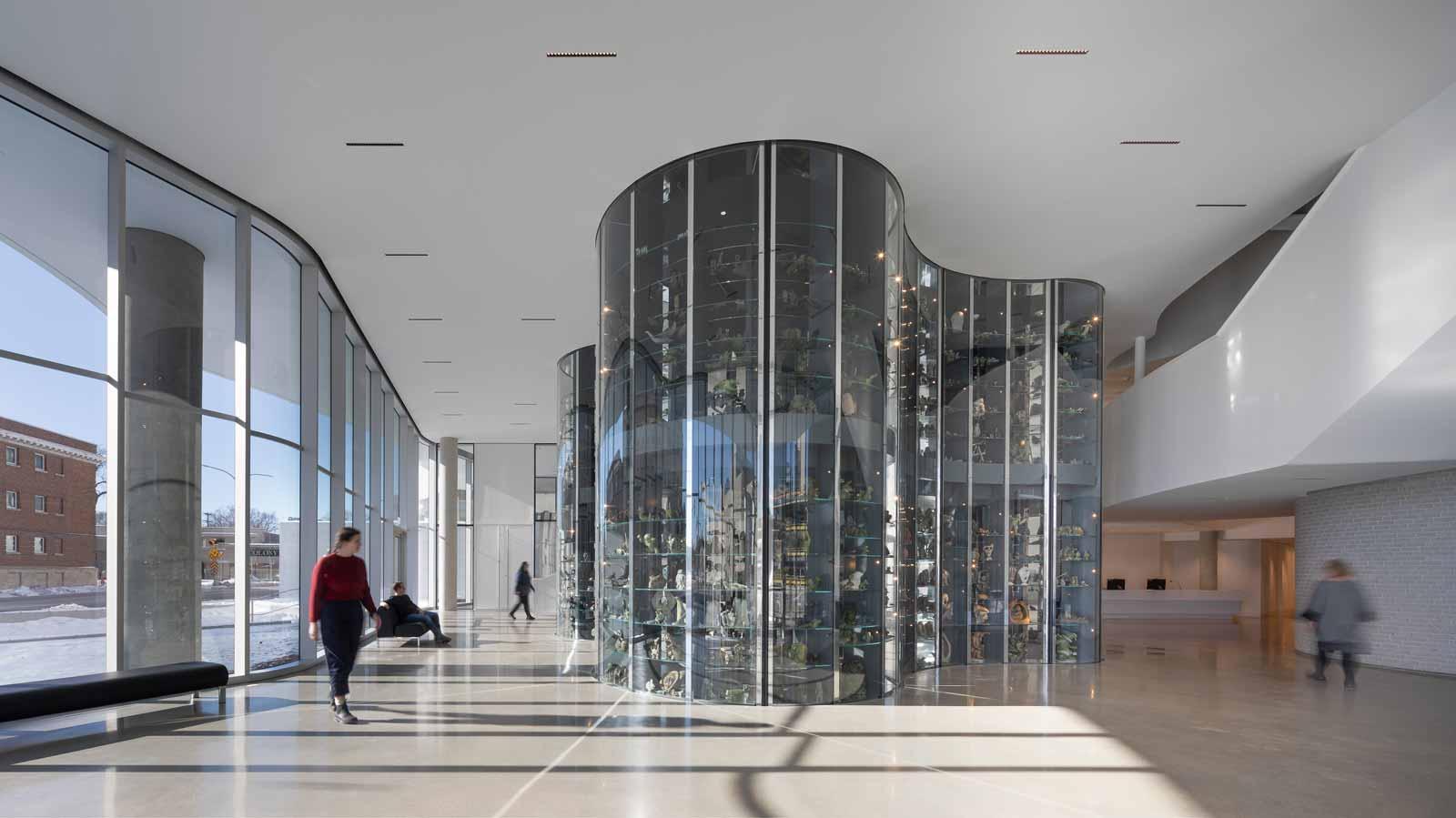 The Visible Vault, Qaumajuk, the Inuit Art Centre at the Winnipeg Art Gallery.

In recent years, many museums around the world that hold collections of indigenous art have begun to reimagine the ethics of their operations and exhibitions. Some ways of redefining what it means to be a responsible, multicultural museum in the twenty-first century include sharing authority in storytelling, exhibiting the works of a wide variety of living artists, and responsibly inhabiting the land on which museums sit.

Instead of telling stories about their makers, museums in the process of decolonizing recognize their role as that of a collaborator: providing a vehicle through which artists and their works can speak for themselves, often in their own native languages. Qaumajuq confronts the unethical history of Western art collecting practices and the Canadian government’s treatment of northern indigenous communities by serving as a center for intercultural communication. It uses its programming to bridge gaps between visitors and artists of all backgrounds, whether they are physically in Winnipeg, the Canadian Arctic, or elsewhere.

Wight notes that encountering works by past and present Inuit artists opens viewers up to stories from the far North. For those who haven’t yet traveled to some of Canada’s least accessible regions, the Winnipeg Art Gallery and Qaumajuq strive to teach tolerance and empathy through art.