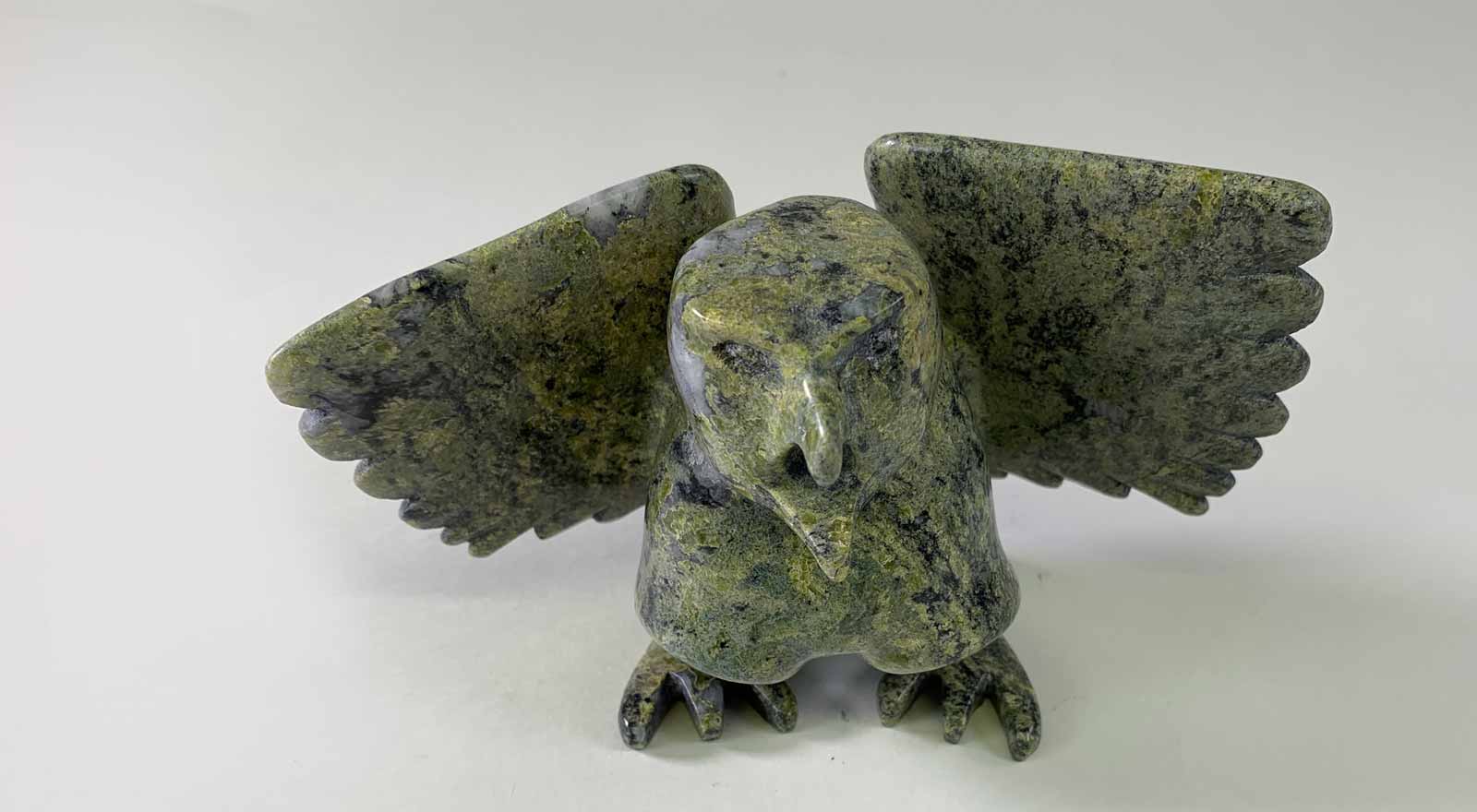 Courtesy of the West Baffin Eskimo Cooperative
Killiktee Killiktee, Eagle.
Prints and Carvings from the Artistic Capital of the North

Prints and Carvings from the Artistic Capital of the North 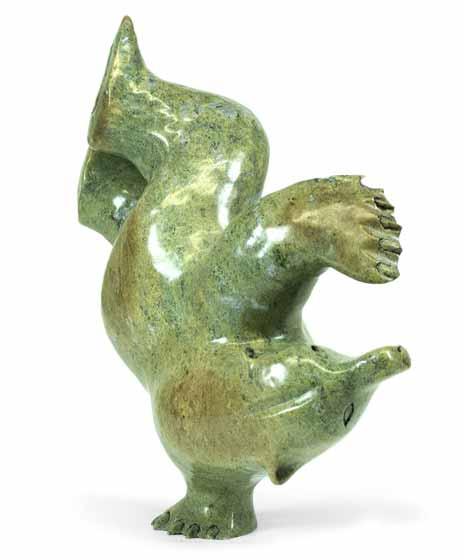 Outside interpreters have historically attempted to map simplistic definitions onto Inuit work, assuming that it must always reference indigenous spirituality or literal impressions of nature. Yet now it is more commonly understood that Nunavut artists work in a variety of materials, treat art-making as a profession, and incorporate both local and outside influence into their practice.

Kinngait, a village formerly known as Cape Dorset, is one of Canada's most important artistic centers. The arctic community, its arts cooperative, and art studios are located on Dorset Island, off the southwest coast of Baffin Island in Nunavut. Though its population sits just under 1500, a significant portion of the village's residents are working artists. Kellypalik Etidloie, Saimaiyu Akesuk, and Killiktee Killiktee are three Kinngait artists whose work has begun to achieve international acclaim. Interviews with the three multimedia artists offer a glimpse into the vibrant contemporary arts scene in Kinngait.

The works that artists are producing in Kinngait are dynamic, varied, and difficult to encapsulate in writing. Yet exhibitions in southern Canada have too often silenced or reinterpreted Inuit artists' voices in an attempt to market their pieces to outside audiences. In more recent years, many Nunavut artists are gaining international recognition, and collectors and viewers are becoming more attuned to the specificities of each artist's work. While Kenojuak Ashevak, one of the first generation of Kinngait printmakers, is often cited as the most well-known artist from the region (with many of her pieces in collections at the National Gallery of Canada, the Art Gallery of Ontario, and even on Canadian postage stamps), a new generation of artists are now establishing far-reaching reputations for their work.

Commercial considerations are important to the artists currently working in Nunavut. Kellypalik Etidloie is a carver who produces dynamic, anthropomorphic animal carvings that appear to move, seemingly emerging from the stone from which he carves them. Etidloie comes from a long line of artists and feels a strong connection to his family when he carves. He says that much of his practice is inspired by the materials with which he works. For Etidloie, the most important aspect of his practice is persistence: he works every day, and this consistency has necessitated inevitable change in his practice. 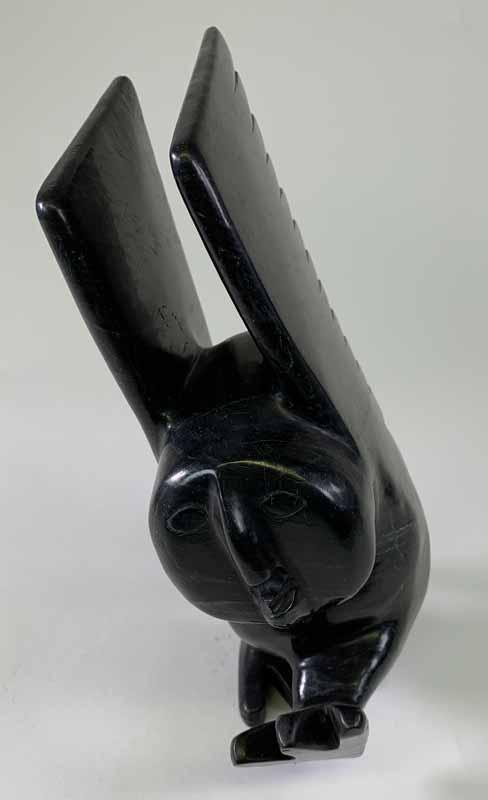 Like Etidloie, Saimaiyu Akesuk is heavily inspired by her materials and her surroundings. Akesuk's vibrant, whimsical drawings and prints are colorful and arresting. Many of them are informed by spontaneity and chance. She says that she likes to work with whatever materials she happens to pick up, mixing and matching colors until she arrives at combinations that she feels are successful. Surprisingly, because of the marked success she is currently experiencing with her prints and drawings, Akesuk resisted making art for a long time, even going so far as to say that she "hated" art until a friend's persistent encouragement to begin creating wore her down. Since beginning to produce works on paper, Akesuk has become increasingly experimental in her use of materials, now drawing in oil pastel as well as with crayon and pencil. Akesuk's compositions seem to combine careful observation of local animals with imaginative and playful color and pattern combinations.

Killiktee Killiktee also takes inspiration from the surrounding natural world in his pieces. Killiktee produces sculptures, prints, and drawings, but has been carving for seventeen years. He believes that his work has evolved immensely since he began. He started his career by carving likenesses of Inukshuks and seals, but now notes bears, falcons, eagles, and owls among the animals that inform his practice: their accessibility and proximity give him what he needs for inspiration. He wants those far away from Nunavut to know that the carvings that he and his peers make are part of the land and part of the animals—that they are inextricable from each other. Killiktee's brother Sharkey is also a well-known carver who has provided Killiktee with advice and encouragement. Like Etidloie, Killiktee feels a strong connection to his family when he carves.

Prior to the 1950s, artists across Canada's North created carvings in stone and bone, much of which was traded with outside visitors. Since 1949 (the point at which art historians discern a transition to the "contemporary" period of Inuit art production), artists have continued to produce works of art as a valuable economic endeavor for their communities. Yet scholars and critics south of the Arctic Circle have only relatively recently begun consulting artists themselves about the pieces they produce. 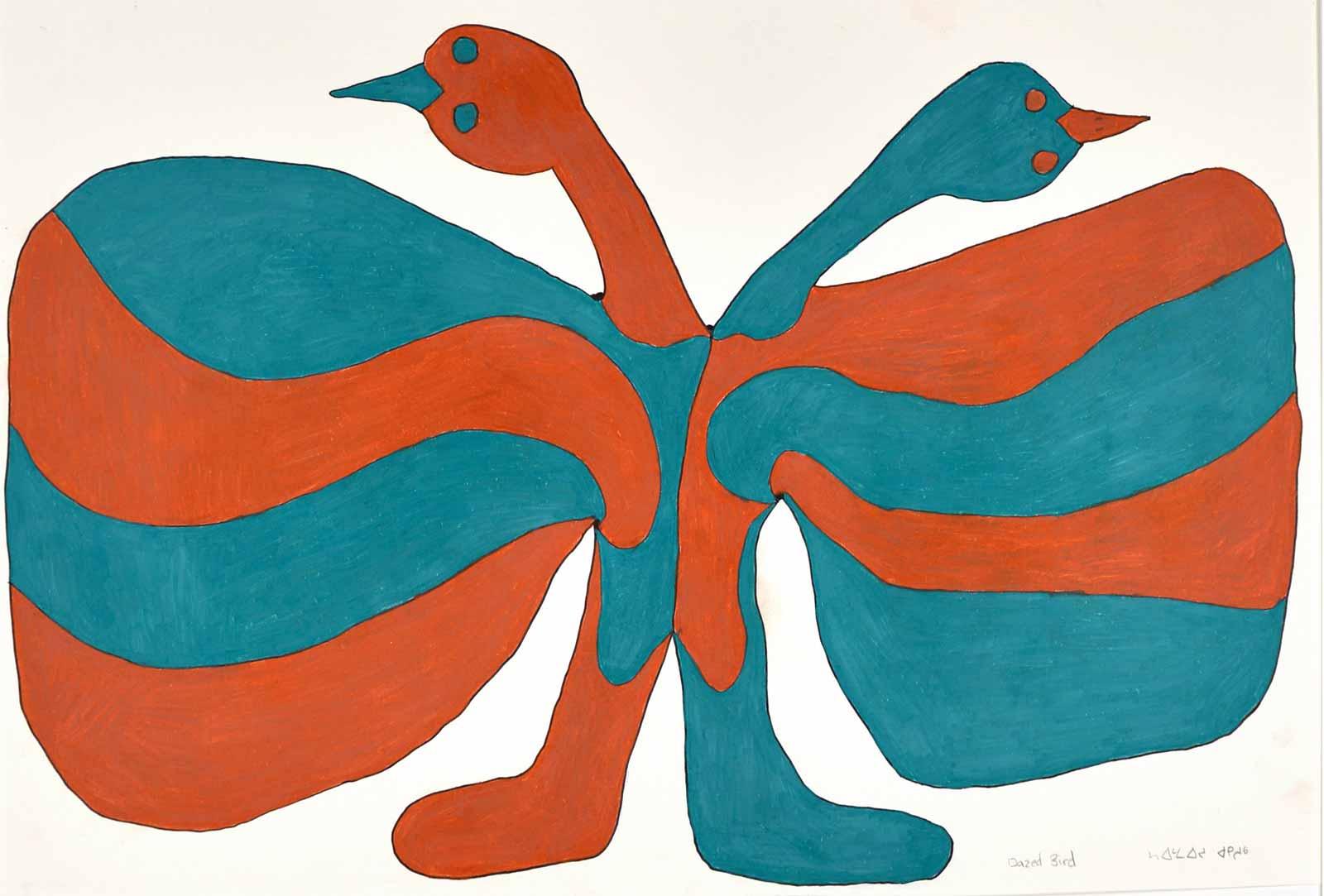 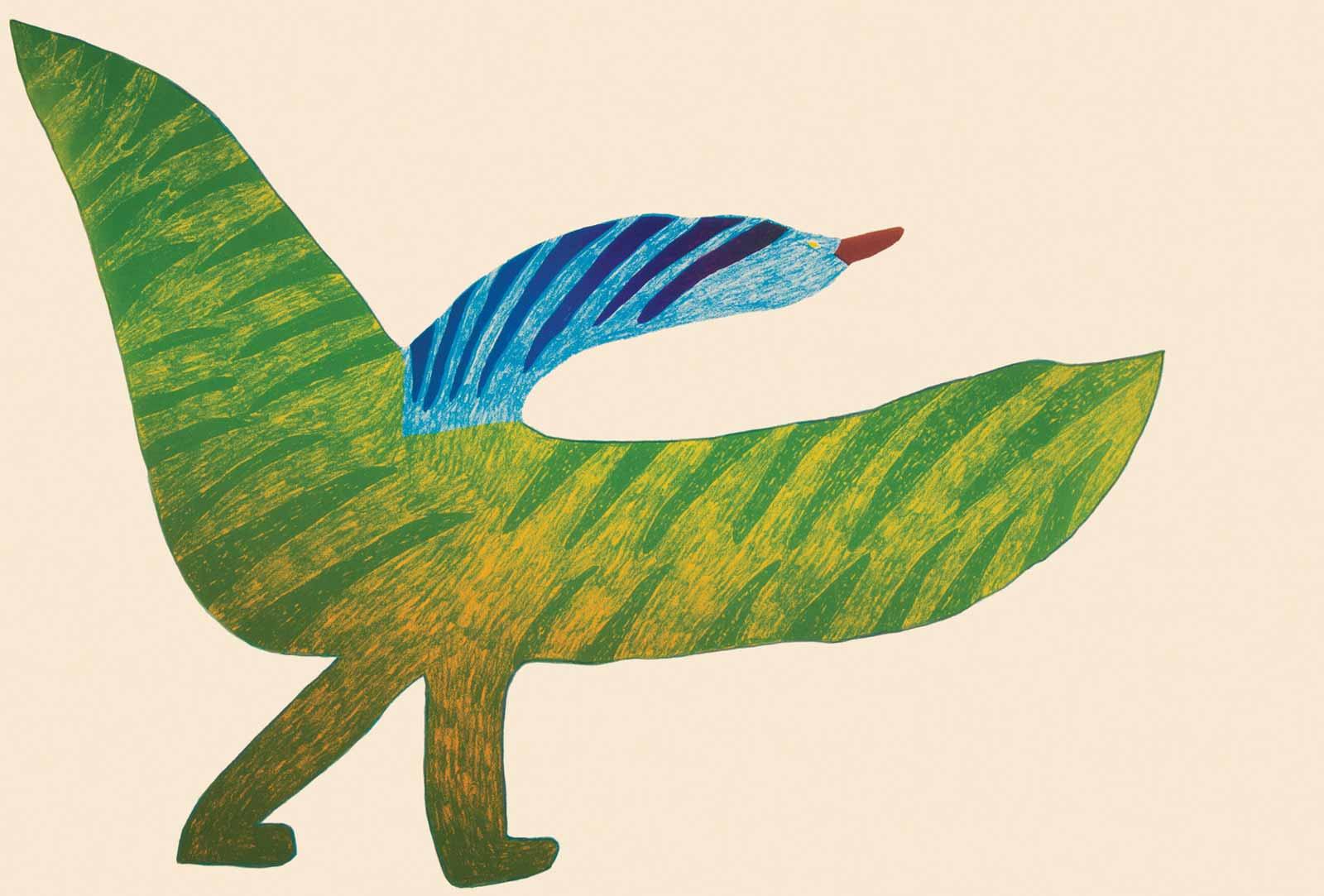 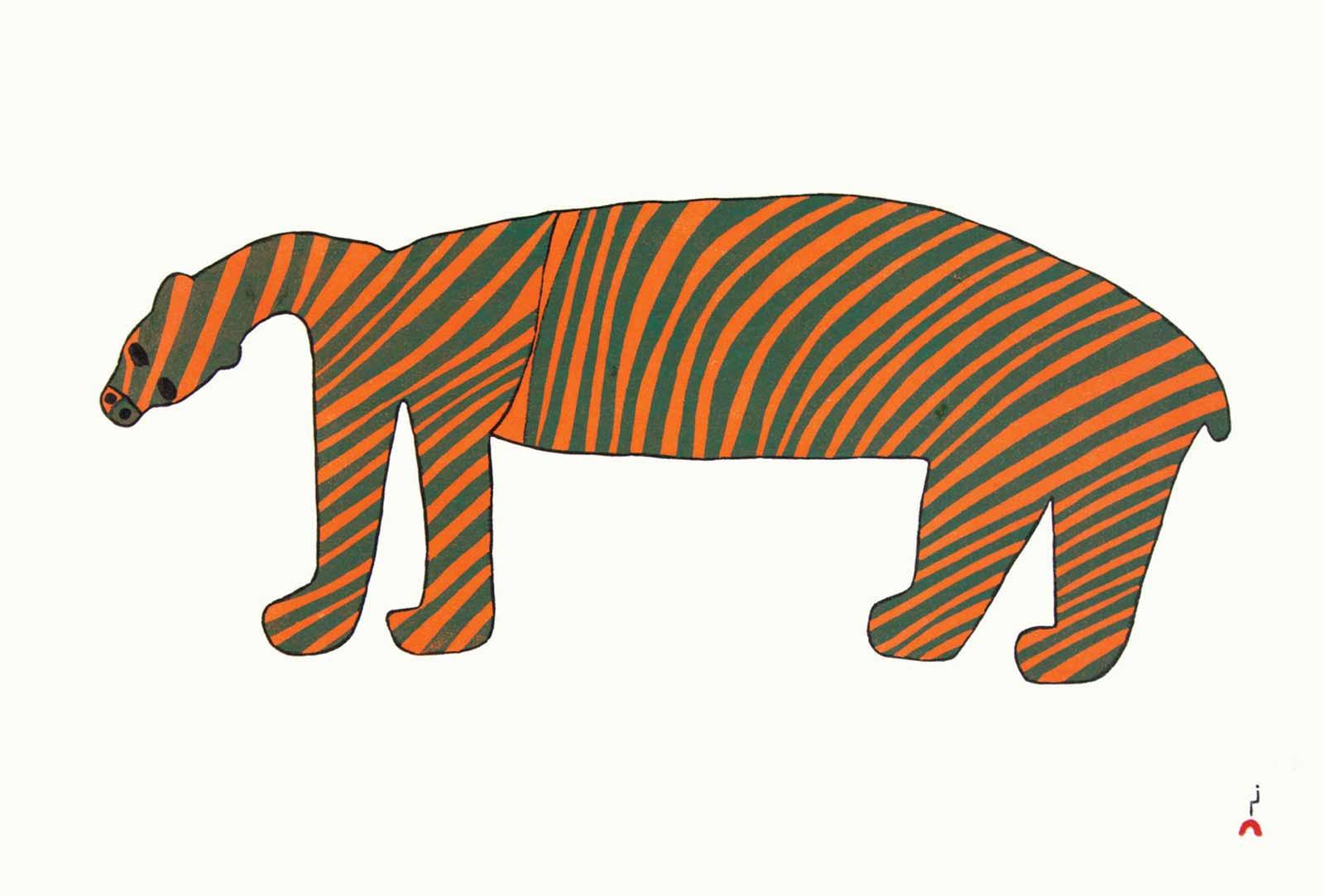 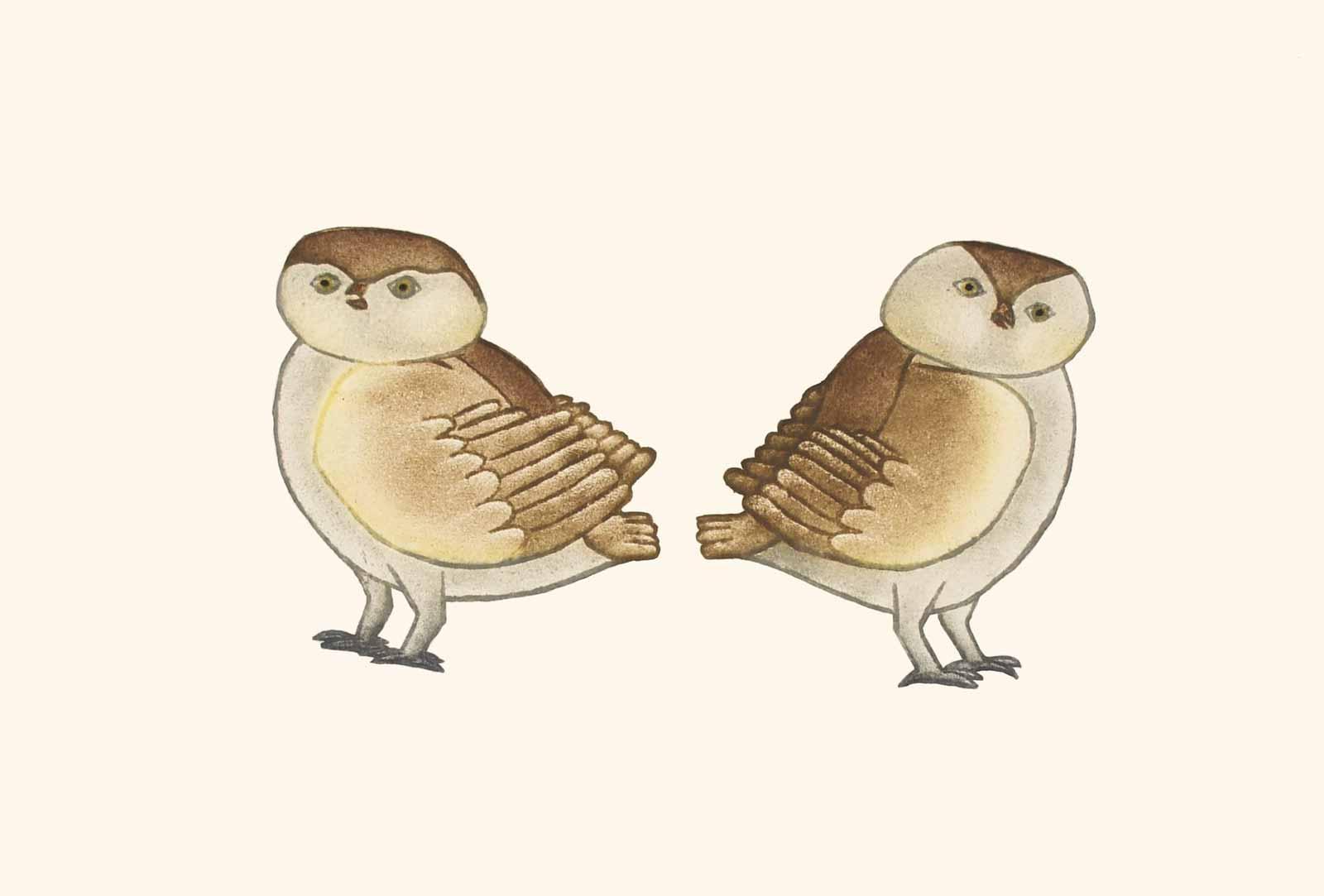 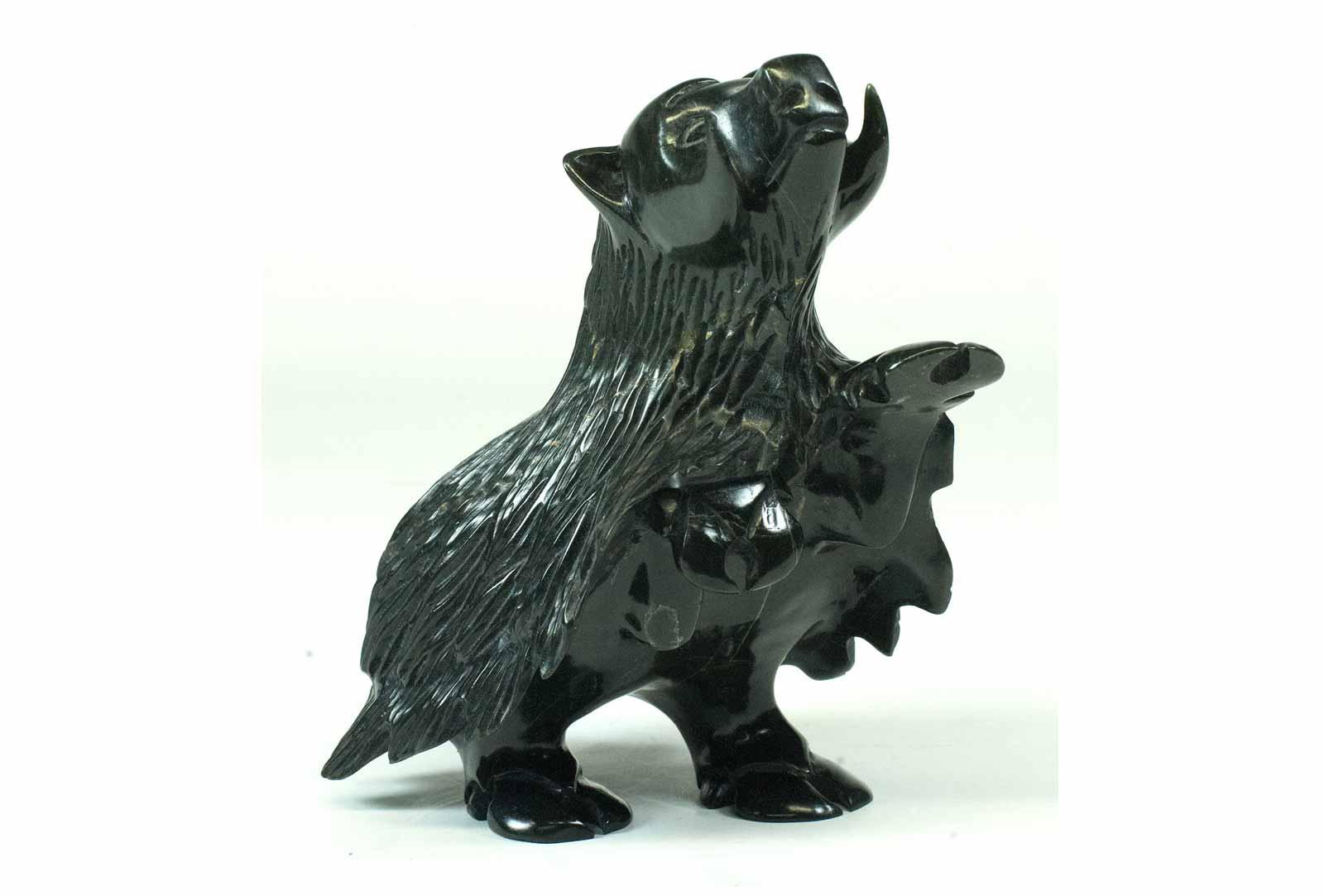 Kinngait's largescale art production began in the 1950s, when southern Canadian artists James Houston and Terry Ryan visited the community. They collaborated with local artists to open a printmaking studio and crafts center with the aim of producing work for outside markets. Houston partnered with Kananginak Pootoogook to create linoleum-cut prints and carver Osuitok Ipeelee to develop a method for duplicating images by taking impressions from an incised walrus tusk. Houston helped bring workshop supplies to the community, and several other local artists joined forces to produce the workshop's first group of prints. The initial prints that local artists released in the 1950s were testament to their ability to adapt seemingly-foreign practices to local subject matter—Houston is noted to have encouraged local makers to use stone, while traditionally, carvers worked more in ivory, bone, and antler.

Despite not initially having access to a press in the 1950s, artists in Kinngait made their prints using a hand rubbing technique, and many continued to work in this method, having been left out of Houston's selective tutorials. Between 1957 and 1958, the community studio became part of a cooperative—known today as the West Baffin Eskimo Cooperative. Stone carving lends itself well to stone cut print processes, and many artists in Kinngait continue to work across both media, indicating their underlying material similarities. In both carving and printing, the artist must manipulate smooth, hard material, to reveal organic-seeming shapes. Printing involves applying ink to the carving and pressing it onto a two-dimensional surface. Prior to the 1950s, many artists maintained a primarily three-dimensional practice. Today, carvings and two-dimensional works on paper seem to be of equal importance. Outside interpreters have historically attempted to map simplistic definitions onto Inuit work, assuming that it must always reference indigenous spirituality or literal impressions of nature. Yet now it is more commonly understood that Nunavut artists work in a variety of materials, treat art-making as a profession, and incorporate both local and outside influence into their practice.

The West Baffin Eskimo Cooperative has been a source of economic support for the community since the Co-op was incorporated in 1959, and has remained largely independent of other systems. The Co-op's arts sector manages its own marketing branch, Dorset Fine Arts, whose offices are in Toronto. Dorset Fine Arts distributes artworks to galleries around the world. The cooperative has been releasing an annual print collection since 1959, to great excitement among international collectors. The 2020 print collection is available now through Dorset Fine Arts' gallery partners.