The Most Important Impressionist
You’ve Never Heard Of 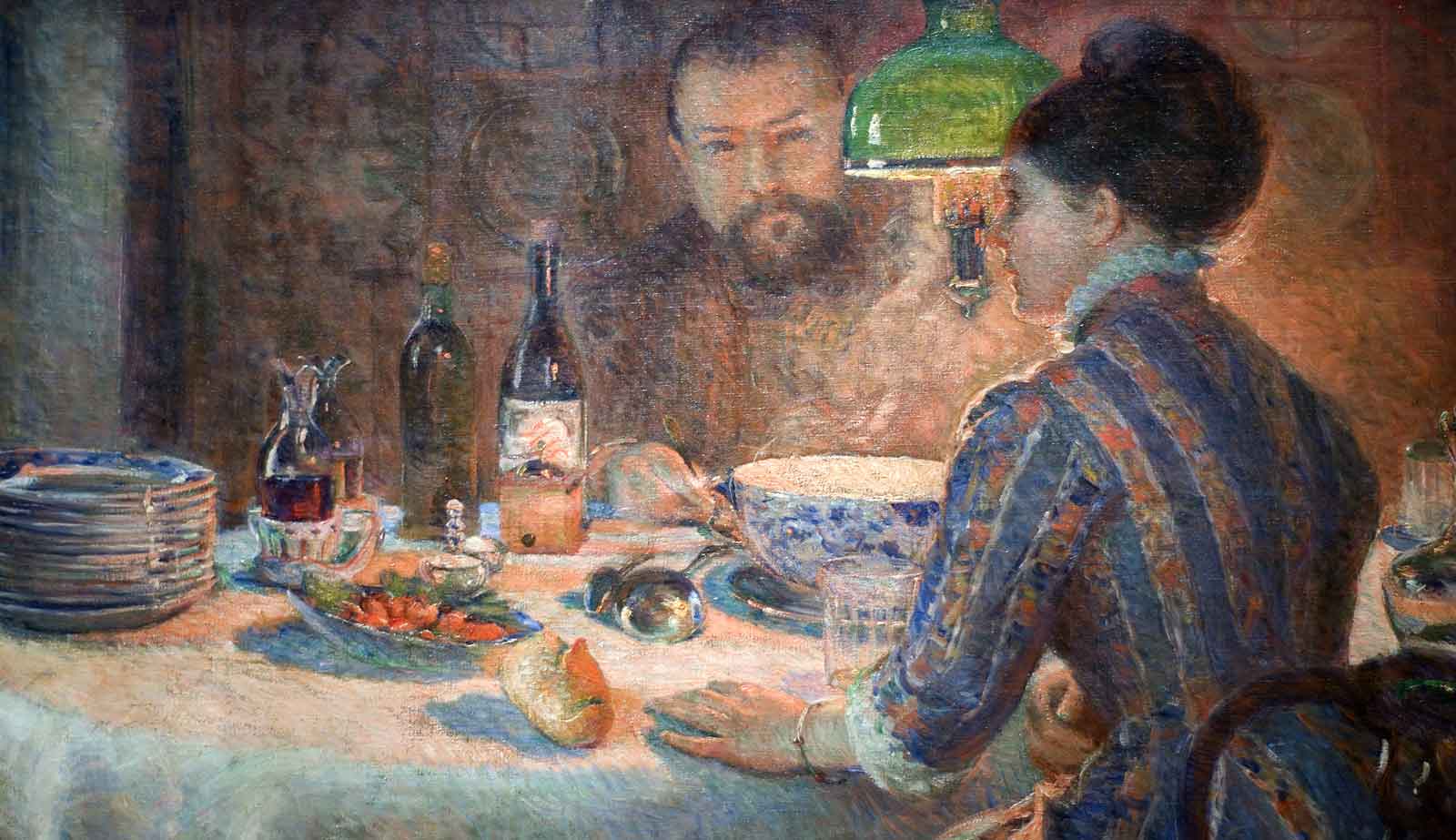 Wikimedia commons
Under the Lamp, 1887.
Marie Bracquemond was once considered a great Impressionist. Why haa her legacy remained unknown to much of art history?

Once considered a great Impressionist, why has Marie Bracquemond remained unknown to much of art history? 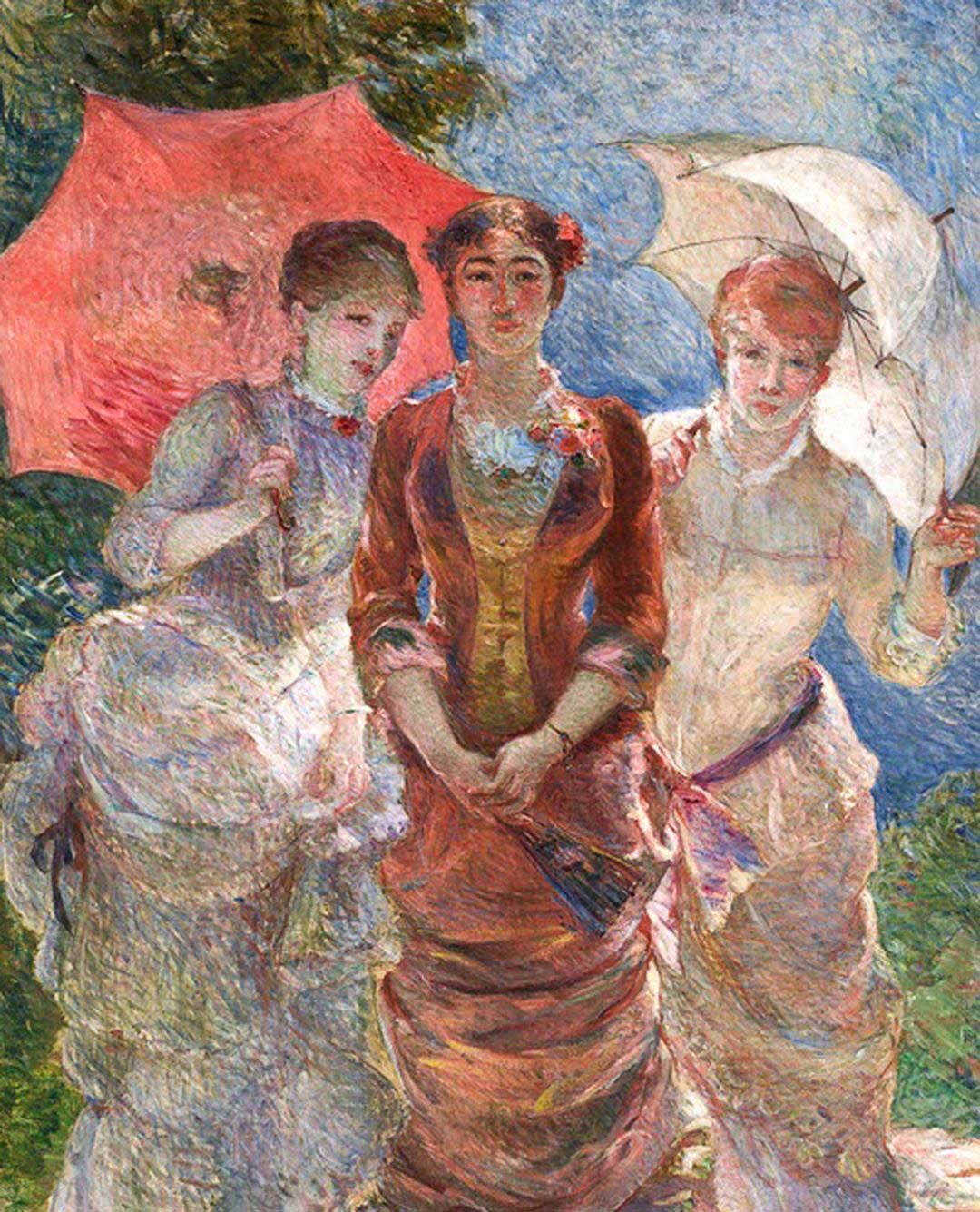 “… As with so many other instances, Bracquemond was a talented, assertive artist whose own aspirations were overshadowed by her husband’s demands.”

Orin Zahra, Assistant Curator of the National Museum for Women in the Arts

In 1928, art historian Henri Focillon famously recalled “les trois grandes dames” (“the three great ladies”) of Impressionism: Mary Cassatt, Berthe Morisot, and Marie Bracquemond. Two thirds of this list is unsurprising: Mary Cassatt and Berthe Morisot have been—though not without delay or limitations—recognized as key figures in the impressionist movement. In 2018, they were both the subjects of major solo retrospectives (Mary Cassatt at the Musée Jacquemart-André in Paris and Berthe Morisot at the Barnes Foundation in Philadelphia). But Marie Bracquemond? The name commands no such brand recognition.

Despite semi-regular efforts to shed light on the artist once referred to as “one of the most intelligent pupils in Ingres’ studio,” Marie Bracquemond’s life and work remain largely overlooked by the non-art-historical community (and even by some within). Though Bracquemond featured prominently in the national tour of the 2017 exhibition Women Artists in Paris 1850-1900, Elizabeth Kane’s aptly titled 1983 article “The Artist Time Forgot” still feels, well, aptly titled.

As a multifaceted, talented artist, Bracquemond deserves the acknowledgement that art historians have only recently accorded her. So why hasn’t it caught on? Over the past century, her lack of legacy has been variously attributed to her husband, her health, her own apathy—but the reason realistically and probably lies within the system in which she painted and produced. Patriarchal structures defined her personal and professional life, the kind that Linda Nochlin identified in her landmark 1971 essay “Why have there been no great women artists?”

Bracquemond’s story has all the makings of a memorable struggle-against-the-odds. Marie Anne Caroline Quivoron-Pasquiou was born on December 1, 1840 in Argenton-en-Landunvez, France. Where Morisot’s family was thoroughly bourgeois and Cassatt’s, affluent and cultured, Quivoron-Pasquiou grew up working-class. Her father, a sea captain, died early in her childhood, and, when her mother remarried, Quivoron-Pasquiou was constantly uprooted, living in numerous cities between Switzerland and France.

Quivoron-Pasquiou’s first painting attempt has been traced to a birthday present for her mother, wherein she created her own pigments, using crushed flowers. She eventually insisted on painting lessons and, though she would never receive formal training, worked with M. Wasser, an art restorer, who gave her lessons while she was living in Étampes. 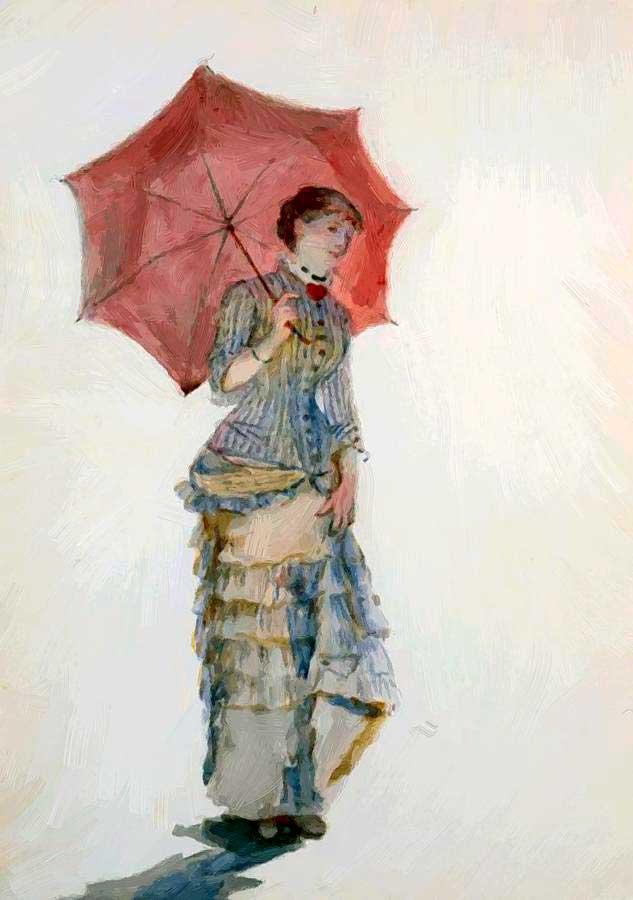 Jane Becker, Collections Management Associate at the Metropolitan Museum of Art and author of the Women Artists in Paris, 1850-1900 catalogue entry on Bracquemond, explains that “women of a higher class had access to private classes, even though they didn’t have access to, say, the École des Beaux Arts.”

While she may not have been born into wealth or familial connections, Quivoron-Pasquiou did meet the neoclassical Jean-Auguste-Dominique Ingres, an encounter that presaged her career and stylistic developments. The then-elderly master encouraged Quivoron-Pasquiou, even suggesting she submit to the salon as one of his students. And in 1857—when she was just 16 years old—her first-ever submission was accepted.

While her initial work expressed a romantic inclination—medieval scenes with a touch of sorrow—Quivoron-Pasquiou shifted under Ingres’s guidance, and still further when she decided to leave his studio. “I must admit Monsieur Ingres’s severity frightened me,” she wrote. “He thinks a woman lacks the drive and perseverance required by painting and wants to set limits for her, granting her only the painting of flowers, fruit, still lifes, portraits, genre scenes, etc.” The comment foreshadows her own drive and her later interest in impressionism—a movement that captured effects, rather than details, a movement with progressive leanings. 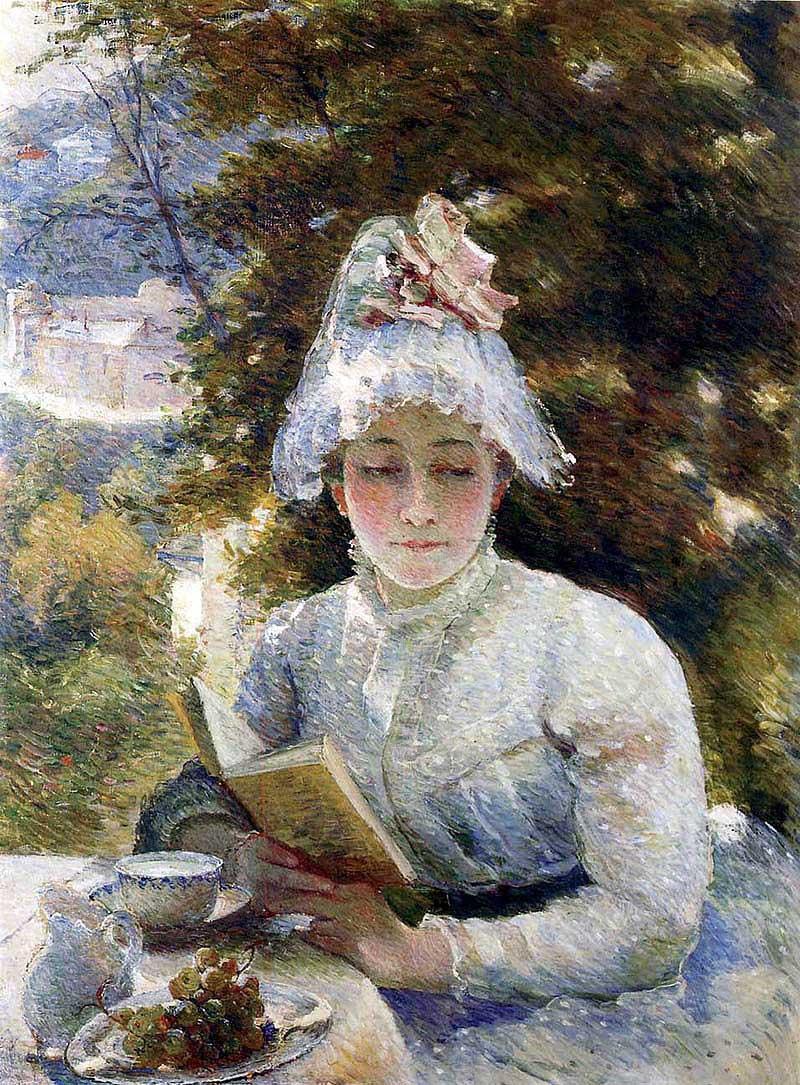 Félix Bracquemond, a painter and etcher, entered into Quivoron-Pasquiou’s life while she was painting copies in the Louvre (a commission that had stemmed from her successful Salon foray). They married in 1869, and, at first blush, it seems a companionate love, two artists united over their craft. The couple often worked together; the more established Félix introduced Marie to new artists and media, like porcelain and etching.

Yet their personalities—and their artistic styles—proved incompatible. At the turn of the 1880s, Marie Bracquemond moved towards Impressionism, swapping her studio for en plein air (the outdoors), making an effort to capture the diaphanous effects of light on white gowns, cropping her work to capture transient moments.

Where she once admired Ingres, she now added admiration for Degas, Gauguin, and Monet. “Compared to the rapid, broad brushstrokes used by Cassatt and Morisot,” says Orin Zahra, Assistant Curator of the National Museum for Women in the Arts, “her forms were less sketchy and spontaneous, retaining to some degree her Neoclassical training and the finished surfaces associated with the academic style.” Yet, during this period, Bracquemond roughened her strokes, crosshatching, adopting a more vibrant palette, and exhibiting with the Impressionists in 1879, 1880, and 1886.

Félix wouldn’t hear of it. Her son, Pierre, wrote of his mother’s dream of “pursuing the ardent illusions of color” and Félix’s distaste for the Impressionist values. “They extended this conflict to all things, so that what might have been a negligible difference for others—something that could have been adjusted to—took on the proportions of a drama: their drama.”

Gustave Geffroy, a family friend and art critic, once described Félix as “a terrible master, both argumentative and authoritarian ”who was unwilling to cede any point. His temper disproportionately affected Marie—when she tried to appease him, he would reply, 'Your sweetness crucifies me.'” 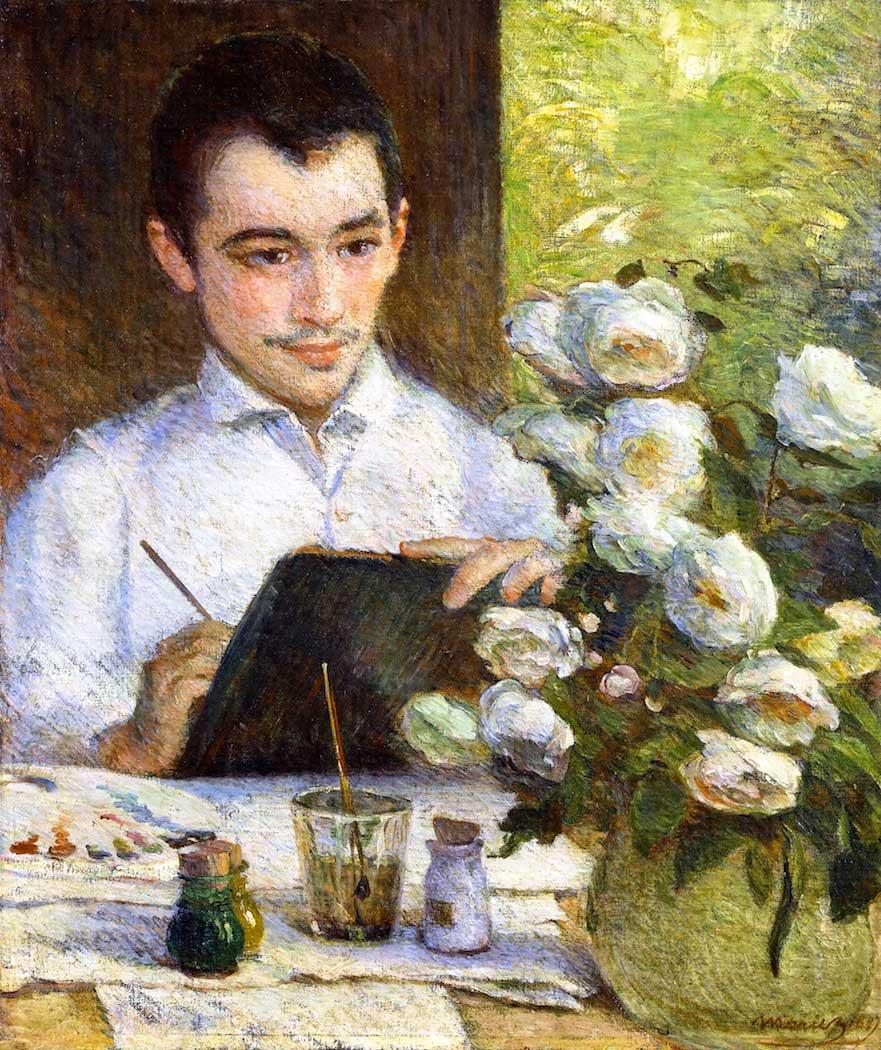 To maintain a semblance of harmony, Félix’s family bent to his will. Pierre described how his father “saw life and love in very straightforward terms, with no inconvenient complication…If he kept his family in a state of almost total isolation, it was because he himself sought peace and quiet.” In a combination of health problems, an oppressive marriage, and familial obligation, Marie Bracquemond slowly drew away from her paints, all but abandoning them around 1890, and, relationally, became reclusive. “Despite her gifts, despite her striving, despite her enthusiasm, the day came when, with an obscure feeling of grief, she had to confess herself beaten,” wrote Pierre. 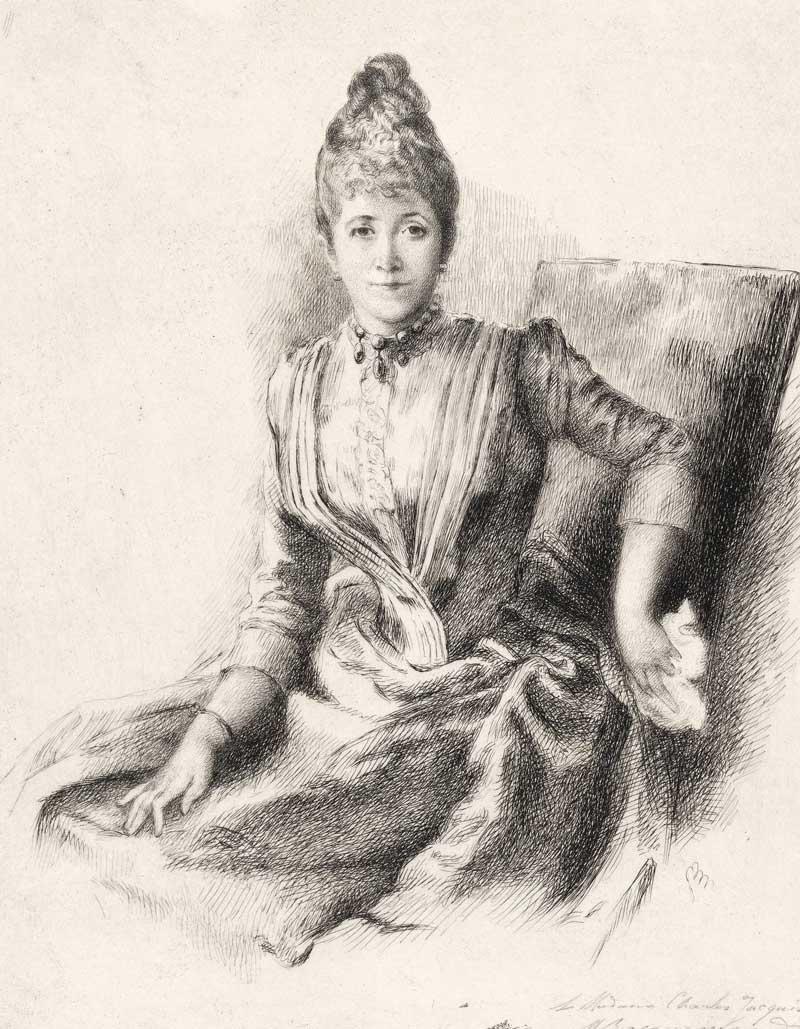 “She was still part of the leading avant-garde art movement of the late nineteenth-century, displayed an unusual wide range of works in various media,” Zahra summarizes. But “as with so many other instances, Bracquemond was a talented, assertive artist whose own aspirations were overshadowed by her husband’s demands.”

“When we think about someone like Morisot, we know Eugène Manet, her husband, was very, very supportive, and we know that she also had this whole support structure of being around Édouard Manet [Eugène's brother] himself,” explains Becker. Mary Cassatt, too, associated with a supportive set: the artist Edgar Degas, collector Louisine Havemeyer, and art dealer Paul Durand-Ruel, to name a few. Essentially, in addition to talent, having the right support structure could mean getting your work into the hands of the right collectors—and that ideal support structure was certainly not the isolationist Félix.

Becker suggests that Bracquemond remains unrecognized “because we don’t see her work as much; there’s less access to it.” Bracquemond has “a few key pieces in public collections, mostly in French collections.” Other than that, they’re largely held privately—an effect of those connections and decisions made in life and after. Those public collections that own her works own very few and, given the evolution of her style, that separation of paintings can make understanding her oeuvre—or promoting interest in it—a task of some difficulty.

More broadly, of course, art historical narratives (and the people who write them) have been highly resistant to change. “Only in the last 40 or 50 years, have there been scholars and institutions interested in studying and championing artists from diverse backgrounds,” adds Zahra. “It is an ongoing problem that art history as a field is still working to correct today.”

And in Bracquemond we have a case study of that problem. Even as a European impressionist, one of the “les trois grandes dames”, she has fallen to obscurity, an actor-turned-subject in her own tragedy. “None of her hopes had ever been realized,” lamented her son. “Always there was disappointment, and yearning, for she felt a victim of injustice and her despair brought her nothing.”