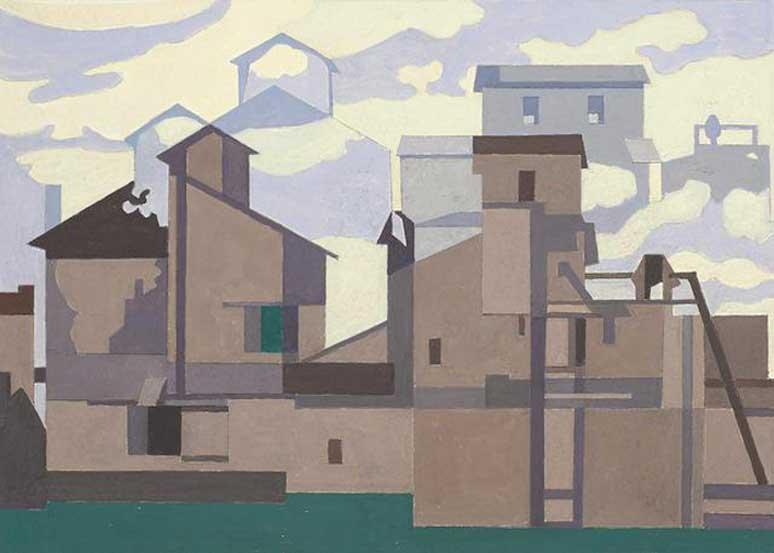 New York- Bonhams announces the American Art sale on May 23, which will feature a strong selection of modern works. Among the artists featured in the sale are works by Charles Sheeler, Marsden Hartley, Elie Nadelman, Charles Green Shaw, John Marin, Thomas Moran, and Carl Ethan Akeley. With 56 lots offered and estimates ranging from under $10,000 to $100,000, the sale presents a fantastic opportunity for new and established collectors alike. The public exhibition will be open May 19 to 22.

Appearing at auction for the first time is Architectural Cadences by Charles Sheeler, 1954, a Precisionist abstraction in the artist's distinct style (estimate: $70,000-100,000). This work on paper was completed after the oil painting dually titled, Architectural Cadences, from 1954, which is currently in the collection of the Whitney Museum of American Art, New York. Modeled after this original composition, it was a unique work reproduced as an edition of serigraph prints. According to the original owner of the present work, fellow artist and friend of Sheeler's Frederick S. Wight, these prints were issued at the suggestion of Edith Halpert, of The Downtown Gallery, New York. The prints were given with compliments to those who helped underwrite the cost of color reproductions published in the exhibition catalog for Sheeler's 1954 retrospective at the University of California, Los Angeles, which was curated by Wight.

Head of a Man in a Top Hat by Elie Nadelman is one among an edition of eight posthumous casts and no known editions of this model were produced in bronze during the artist's lifetime (estimate: $60,000-80,000). Nadelman composed an elegant and clearly defined reduction of the forms of a man's face, which he further modernized with the inclusion of the large top hat, a symbol of modernity and contemporary, sophisticated fashion of the period. This simplified and uniquely stylized representation of the human figure remained a constant throughout Nadelman's oeuvre.

Further highlights include Starfish by Marsden Hartley, with its fluent brushwork, simplicity of design and its direct poetic introspection (estimate: $100,000-150,000); Untitled (Abstract on White) by Charles Green Shaw, a superb painting of colorful abstract shapes creating a three dimensional quality (estimate: $7,000-10,000); and The Charging Herd by Carl Ethan Akeley, modeled in 1915, an authentically detailed bronze sculpture of seven African elephants that possibly served as a prototype for the American Museum of Natural History's great hall of African mammals in New York (estimate: $70,000-100,000).