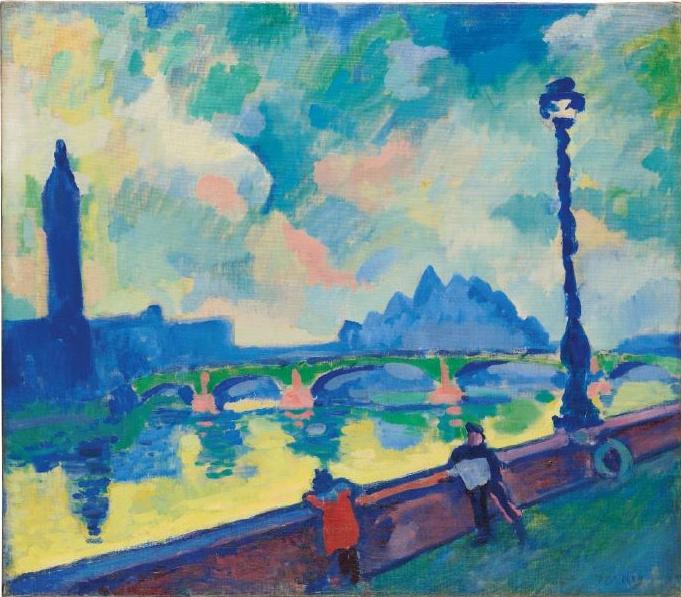 A Rare Fauve View of the Thames by André Derain to Star in Christie’s Impressionist And Modern Art Evening Sale, 27 February 2018

London – André Derain’s Londres: la Tamise au pont de Westminster(1906-07, estimate: £6,000,000-9,000,000) will star in Christie’s Impressionist and Modern Art Evening Sale on 27 February, launching ‘20th Century at Christie’s’, a series of auctions that take place in London from 20 February to 7 March 2018. One of 29 recorded paintings of London that Derain painted across 1906 and 1907, it comes to auction alongside the exhibition ‘Impressionists and London’ currently on view at London’s Tate Britain. Londres: la Tamise au pont de Westminster is captured from the Albert Embankment, portraying the Thames, the Palace of Westminster, Westminster Bridge and, in the background, the pyramidal silhouette of Whitehall Court. As with all of the works in this series, the British capital is saturated in radiant colour. The expansive grey waters of the Thames are transformed into a mosaic of shimmering yellow, blue and turquoise; the sunlit sky rendered in an iridescent patchwork of blues and pinks. The painting will be on view in Hong Kong from 5 to 8 February and New York from 12 to 14 February 2018 before being exhibited in London from 20 to 27 February 2018.

Just a few months before he ventured to London, Derain had made his explosive debut into the Parisian art world when he was included in the Salon d’Automne of 1905. Derain’s work at the Salon caught the eye of one of Paris’ leading contemporary art dealers, the man who had, a few months earlier, introduced the artist to Matisse: Ambroise Vollard. Vollard became his dealer later that same year and it was his idea to send Derain to London and commission him to paint a series of cityscapes there. With Monet’s famous series of Thames views set firmly in his mind, over the course of his time in London, Derain travelled across the city in search of his subjects, sketching an array of different views. Unlike Monet, whose depictions of the city had centred around three specific viewpoints, Derain was not fixed to one specific location. Instead he captured the city from a range of positions, never returning to an identical subject twice in an attempt to challenge himself with each work. The notorious London fogs for which London was so well known, and under whose spell Monet had fallen, proved strangely elusive for Derain.  As a result, Derain did not pursue the same muted, soft effects of light and colour that this atmospheric condition cast over the appearance of the city, but rather focused on more radical formal experimentation.

Keith Gill, Head of Sale, Impressionist and Modern Art Evening Sale, Christie’s, London: “Derain’s time spent in London saw him produce some of the most revolutionary works of his career. With its blazing colour, radical means of execution and structure, Londres: la Tamise au pont de Westminster is a magnificent painting that takes its place within the esteemed artistic lineage of Turner, Whistler and Monet, all of whom had depicted London in their art. Among the most iconic works of Fauvism, many of this rare series of London paintings are now housed in museum collections across the world, including the Musée d’Orsay, Paris; Museum of Modern Art, New York; The Metropolitan Museum of Art, New York; and the Tate Gallery, London, where a selection of other works from this groundbreaking London series are currently on view in the exhibition, ‘Impressionists in London’. Following the widely acclaimed exhibition of Derain’s work of this period at the Centre Pompidou, Paris, we are honoured to present this rare Fauvist work in our Evening Sale in London.”

Arriving in London with a strongly felt desire to take colour, and indeed painting, beyond traditional conventions, Derain’s radical ideas took flight upon visiting the capital’s collections of non-Western art. Visiting the ethnographic and ancient collections of the British Museum, he was immediately inspired to ‘make of the Thames something other than coloured photographs’, as he wrote to Matisse on 15 March 1906. Immersed in the capital, its national collections, and most importantly, removed from the avant-garde hub of Paris, Derain was able to forge an artistic idiom that was wholly unique.

Christie’s, the world’s leading art business, had global auction, private and digital sales in 2017 that totalled £5.1 billion / $6.6 billion. Christie’s is a name and place that speaks of extraordinary art, unparalleled service and international expertise. Christie’s offers around 350 auctions annually in over 80 categories, including all areas of fine and decorative arts, jewellery, photographs, collectibles, wine, and more. Prices range from $200 to over $100 million. Christie’s also has a long and successful history conducting private sales for its clients in all categories, with emphasis on Post-War & Contemporary, Impressionist & Modern, Old Masters and Jewellery.

Alongside regular sales online, Christie’s has a global presence in 46 countries, with 10 salerooms around the world including in London, New York, Paris, Geneva, Milan, Amsterdam, Dubai, Zürich, Hong Kong, and Shanghai.