National Portrait Gallery Presents “UnSeen: Our Past in a New Light: Ken Gonzales-Day and Titus Kaphar” 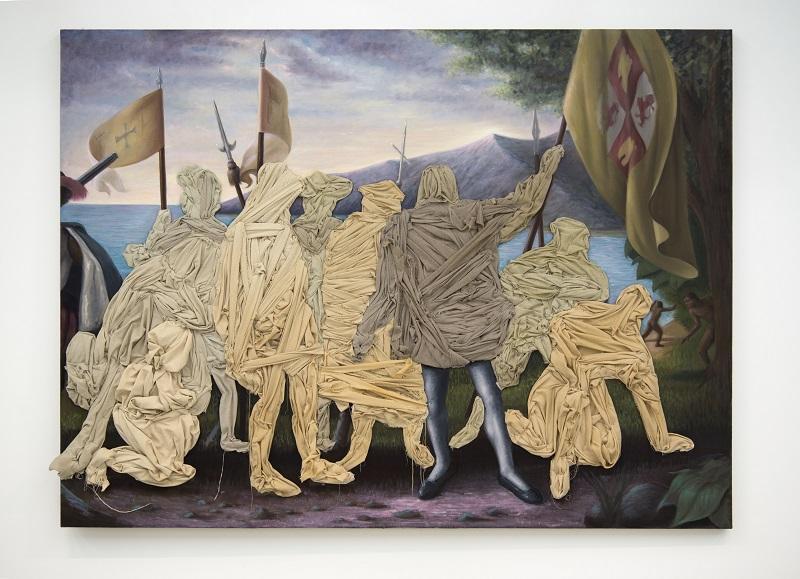 Courtesy of the artist and Jack Shainman Gallery, New York.

As the Smithsonian’s National Portrait Gallery marks its 50th anniversary, it will not only honor the past with special exhibitions but also shape the museum’s next chapter. The first contemporary exhibition of the museum’s anniversary season, “UnSeen: Our Past in a New Light: Ken Gonzales-Day and Titus Kaphar” examines how people of color are missing in historical portraiture, and how their contributions to the nation’s past were rendered equally invisible. Focused around two contemporary artists, Ken Gonzales-Day and Titus Kaphar, the exhibition brings to the forefront African Americans, Native Americans and Latino Americans to amend America’s historical narrative. Reworking traditional art presentations, Gonzales-Day and Kaphar aim to expose mainstream cultural biases and social constructions of race.

This exhibition continues the National Portrait Gallery’s Portraiture Now series and is curated by the museum’s Curator of Latino Art and History Taína Caragol and Curator of Prints, Drawing and Media Arts Asma Naeem. A press preview with the artists will take place Thursday, March 22, from 10 to 11:30 a.m. Members of the public are invited to join for a public talk with artists Thursday, March 22, 6:30–7:30 p.m. A tour with the exhibition’s curators will follow Sunday, March 25, at 3 p.m.

“The history of early American portraiture favored white men who owned land, and it defined American identity in ways that excluded women and people of color from our nation’s visual record,” said National Portrait Gallery Director, Kim Sajet. "UnSeen: Our Past in a New Light" presents the perspectives of two leading contemporary artists who create powerful works of art that re-frame history."

While obtaining his Master of Fine Arts from Yale University, the New Haven, Conn.-based artist Kaphar (b. 1976) realized how Euro-American colonial paintings, specifically the genre of portraiture, coded racial difference. His work is included in the collections of major museums, including Birmingham Museum of Art, Alabama; Brooklyn Museum, New York; Museum of Modern Art, New York; Perez Art Museum, Miami; Seattle Museum of Art, Seattle; Studio Museum of Harlem, New York; and Virginia Museum of Fine Arts, Richmond, Va., among others. In this exhibition of 17 paintings and one sculpture by the artist—the largest exhibition of his work to date—Kaphar invites viewers to reflect on the absence of race in traditional representations of America’s history by recreating well-known paintings to include those traditionally left out. Kaphar smears tar, erases with white paint, shreds the canvas into strips and peels it back to reveal another story. His portion of the exhibition is divided into three sections: “Darkened National Histories,” “Deconstructed Portraits” and “Disappearing Bloodlines.” All of Kaphar’s examples point to how portraiture in the 18th and 19th centuries aggrandized people in power while ignoring the powerless.

Los Angeles-based artist Gonzales-Day (b. 1964) will present works across three themes: “Absence,” “Distance” and “Naming.” His work has been widely exhibited at major institutions, including the Los Angeles County Museum of Art, Los Angeles; LAXART, Los Angeles; The New Museum, New York; Palais de Tokyo, Paris; and Tamayo Museum, Mexico City, among others. Recipient of a Bachelor of Fine Arts from Pratt Institute, a Master of Fine Arts from the University of California in Irvine and a master’s in art history from Hunter College, City University of New York, Gonzales-Day explores how ideas of racial difference, otherness and national identity have taken shape historically and visually. This artistic investigation has yielded two bodies of work. “Erased Lynchings” grew out of Gonzales-Day’s archival research into lynching in the American West and the recovery of little-known histories of racial violence against Latinos, Native Americans and Asian Americans. In parallel, his series “Profiled” examines how race and ideal beauty have been represented in sculpture, by photographing the collections of international museums and creating compositions that look comparatively at the representation of white bodies and bodies of color.

Gonzales-Day’s juxtapositions prompt the question: “Who is recognized and remembered in the national history, and why?”

The National Portrait Gallery’s presentation will feature work from both of these series.

“UnSeen: Our Past in a New Light: Ken Gonzales-Day and Titus Kaphar” is made possible by Agnes Gund, the exhibition Leadership Committee and the American Portrait Gala endowment.