This winter, the Institute of Contemporary Art at the University of Pennsylvania will present three exhibitions that explore how artists have captured, interrogated, and responded to rapidly changing environments in contemporary society. Exhibitions include: a group exhibition curated by artist Nayland Blake that investigates queer identification through new communications technologies; the first comprehensive career survey and solo museum exhibition dedicated to Cary Leibowitz, whose bold text-based works address issues of identity, sexuality, and queer politics; and a focused exhibition on broadcast and video work, organized in partnership with Electronic Arts Intermix (EAI), that focuses on how artists have engaged with the legacy of broadcast media. Launching at the ICA on February 2, 2018, the winter exhibition program will foster opportunities to engage with a diverse range of artists working within contemporary practice.

“We are thrilled to be able to collaborate with such a dynamic group of artists and institutions this season—from emerging artists exploring the influence of increasingly popular fandom subcultures and digital media on personal identity; to one artist’s attempt to expose raw truths about modern society by mixing pop culture and fine art; to revolutionary innovators who helped pioneer the media art movement, our audiences will encounter topical social issues and contemporary movements that offer resonance and relevance,” said Amy Sadao, Director of ICA in Philadelphia. “Through innovative and timely programming, the Institute of Contemporary Art at the University of Pennsylvania remains committed to fearlessly engaging with topics that break boundaries, encourage discussion, and promote different points of view.”

Organized by Katherine Sachs (CW’69) and Keith L. Sachs (W’67) Guest Curator and artist Nayland Blake, Tag: Proposals On Queer Play and the Ways Forward explores how the expanding influence of digital and online technologies, fandom subcultures, and artistic discourse has created new possibilities for queer identification, changing how personal roles and forms of expressions are defined in contemporary society. Based on the premise that the cultures of role play, sexual play, and digital play have all flourished beyond the boundaries of art structures, this exhibition provides a gathering place and platform for the exploration of queer play created by individuals and groups from the worlds of game design and theory, performance, kink, and activism.

For the exhibition, Blake illuminates these new and evolving forms of representation and examines the implications these developments have had on art and social action through a curatorial approach that draws on their own preoccupation with themes of interracial desire, same-sex love, and racial and sexual bigotry. Artists include A.K. Burns, Clifford Hengst, Arnold Kemp, Savannah Knoop, Dusty Shoulders, and Robert Yang, among others.

Featuring new and never-before-seen works, Cary Leibowitz: Museum Show marks the first comprehensive survey and solo museum exhibition of Leibowitz’s work to date. Organized in close coordination with the artist, the exhibition brings together nearly 350 works that span the breadth of his career, featuring paintings, fabric works, multiples, installations, documentation, photography, and ephemera created between 1987 and the present day.

Widely known under the moniker “Candyass” since he rose to prominence in the 1990s, Leibowitz creates bold, brightly colored, and comically self-effacing text-based works, which draw on both a gay and Jewish perspective in order to address issues of identity, kitsch, modernist critique, and queer politics. Leibowitz explores his own anxieties, neuroses, and insecurities as he attempts to expose truths about contemporary society by fearlessly mixing popular culture and profane sentiments into works that challenge traditional definitions of fine art. Cary Leibowitz: Museum Show will feature a range of Leibowitz’s idiosyncratic approaches, including singular paintings, ceramics, paper umbrellas, trash cans, banners, repurposed stock photography, and beanies.

The presentation at ICA will build off the exhibition’s first iteration at The Contemporary Jewish Museum in San Francisco, creating a unique experience that features additional objects, never-before-seen pieces, and a series of events specifically designed for ICA audiences.

Organized in partnership with Electronic Arts Intermix (EAI), Broadcasting: EAI at ICA brings together an intergenerational group of artists whose time-based artworks are produced in concert with their means of circulation, from the democratic platform of public access television to the instantaneity of social media. Drawing on EAI’s extraordinary archive, and building upon ICA’s history of engagement with media art since 1975, Broadcasting will foster a dialogue between early innovators and contemporary practitioners, such as Tony Cokes, Ulysses Jenkins, Shigeko Kubota, and Kristin Lucas. The works in the show will focus on how artists exploit the act of “broadcast” as a subject, as a means of intervention, and as a form of participation. The installation will show media across an array of displays, ranging from monitors to projections, and will emphasize the temporal nature of broadcast. Furthermore, the exhibition gallery will double as an interactive events space dedicated to public discussions that will be recorded and broadcast online throughout the course of the exhibition, pushing beyond the boundaries of the physical gallery space.

Broadcasting: EAI at ICA is a unique partnership between two pioneering institutions who have played a critical role in supporting the growth of a new artistic medium. In 1975, the ICA opened Video Art, a landmark exhibition that was among the first of its kind. Founded in 1971, EAI was one of the first nonprofit organizations in the world dedicated to advocating for and developing video as an art form, providing a crucial space for production and distribution, influencing, and fostering the careers of such leading figures as Nam June Paik and Joan Jonas. A catalogue for Broadcasting: EAI at ICA will be produced upon the conclusion of the exhibition.

ABOUT THE INSTITUTE OF CONTEMPORARY ART AT THE UNIVERSITY OF PENNSYLVANIA

The Institute of Contemporary Art at the University of Pennsylvania is a non-collecting institution presenting exhibitions at the forefront of contemporary practice and culture that challenge audiences to think in new ways. The ICA is free for all to engage and connect with the art of our time. Since its founding in 1963, ICA has served as a laboratory for the new, introducing and supporting the production of urgent and important contemporary art, beginning with ICA’s inaugural show of paintings by Abstract Expressionist Clyfford Still, followed by the first museum show of works by Andy Warhol in 1965. Throughout its history, ICA has been instrumental in identifying and developing many promising artists before they attained prominence within the international art world, some of whom include—in addition to Warhol— Laurie Anderson, Richard Artschwager, Vija Celmins, Karen Kilimnik, Barry Le Va, Glenn Ligon, Robert Mapplethorpe, Agnes Martin, Pepón Osorio, Tavares Strachan, and Cy Twombly.

Learn more about these exhibitions.

Artemisia Gentileschi (1593-1653) was born in Rome and died in Naples, by which time she was arguably considered one of the most significant Italian Baroque painters. At the age of seventeen, Gentileschi was sexually assaulted which some scholars suggest explains the dramatic nature and subject matter of her art.

The oldest building in New York City is a 400-year-old farmhouse in Brooklyn.

The Gardens of Pompeii & Natural Disasters in Antiquity
The Casa della Regina Carolina Project, focused on an imperial Roman home in Pompeii, seeks to rework many aspects of how we view Roman life, but the team’s current goals are to examine how people of myriad socio-economic backgrounds would have experienced the planted garden spaces of an elite Roman home. 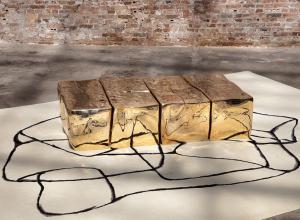 Andrew Wyeth’s Drawings of His Own Funeral
Drawing Center's “The Clamor of Ornament” Uncovers our Shared Humanity
Botanical Illustration: Where Science and Art Meet