Dinner Gallery Presents: If These Walls Could Talk 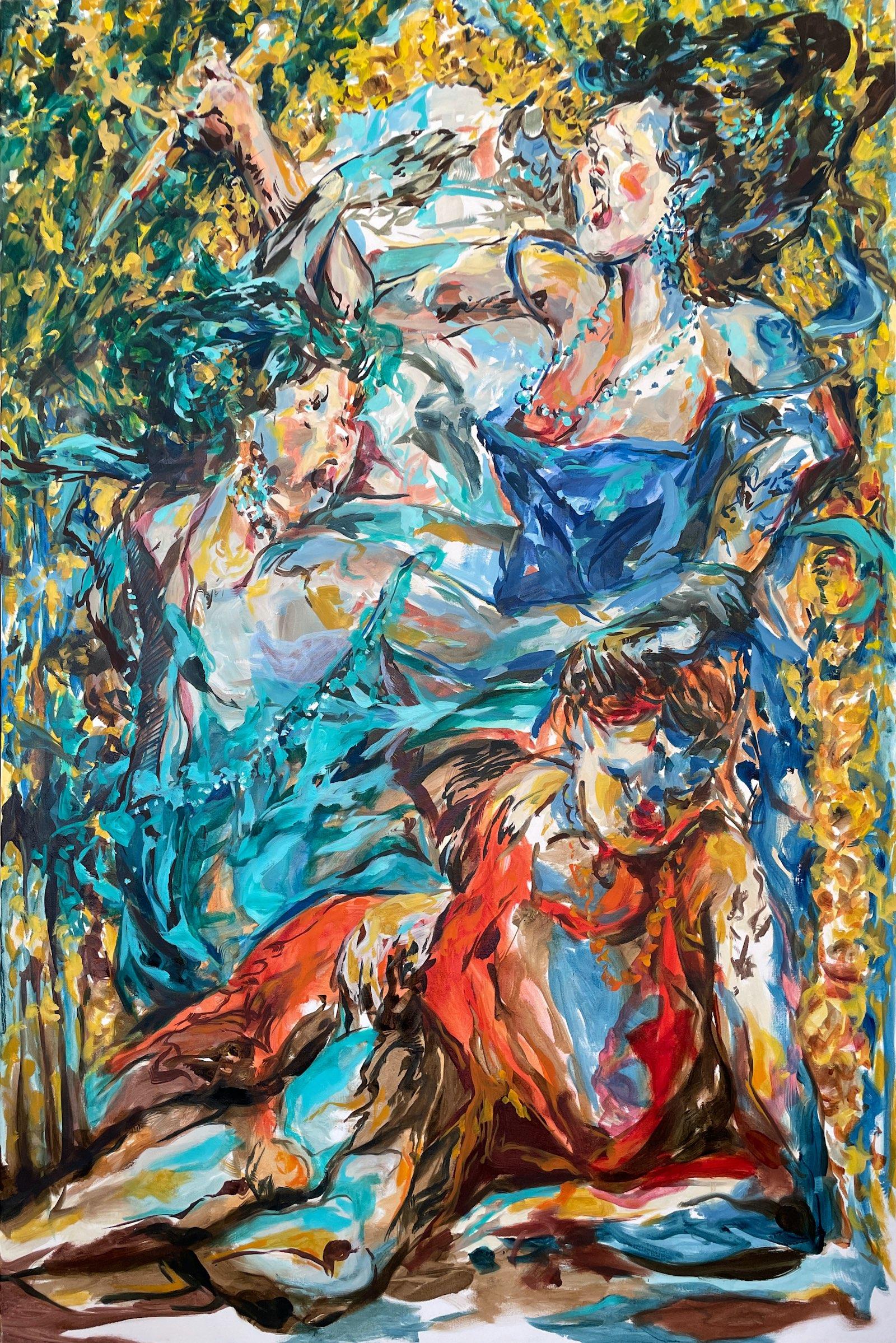 Courtesy of the artist Dinner Gallery.

Dinner Gallery is pleased to present If These Walls Could Talk, a two-person exhibition of new paintings by Rachael Tarravechia and Julia Jo. This exhibition will open on July 15 and will remain on view until August 21, with an opening reception on Thursday, July 15 from 4 to 8 pm.

A home has always been a cocoon of intensely private joy and despair, but the past year has shifted our relationship with it. Tarravechia and Jo make us see it in a new light, using familial spaces to explore identity. Tarravechia carefully recreates photographs taken in her grandmother’s house, inserting hints of both horror and love, while Jo forges fictional domestic spaces where visual opulence is matched by unsavory acts within. Their work lures the viewers into intimate spaces, transforming them into voyeurs.

Tarravechia is inspired by interior design and retro-chic household items. Her new work draws you in with electric colors and then strikes with a certain vacant, sometimes romantic, wickedness. It asks who was here and what did they leave behind. Hers is a beauty rooted in lust and style that borders on the violent. 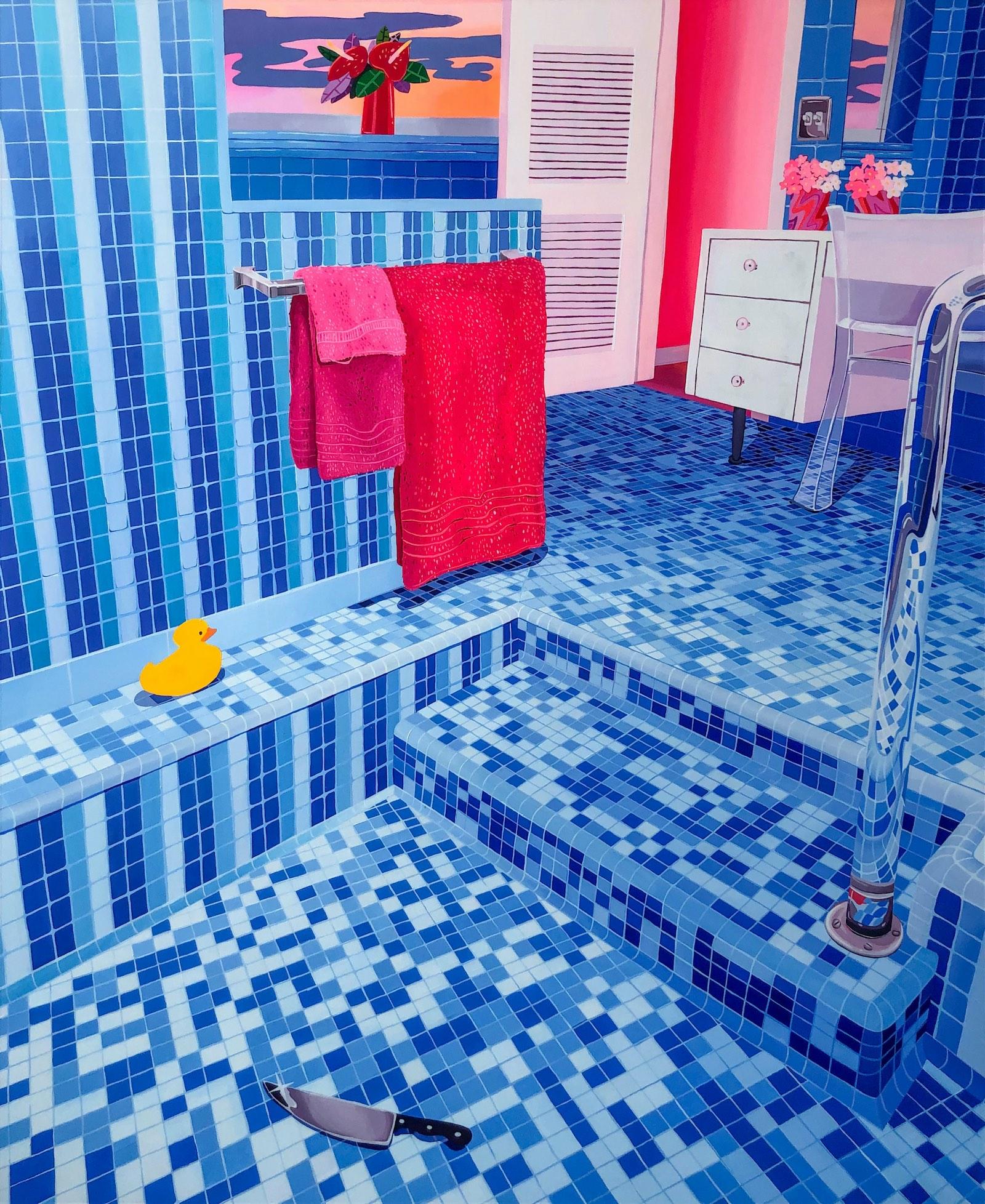 Courtesy of the artist Dinner Gallery.

Jo focuses on interior familial scenes in a chaotic, expressionistic manner between abstraction and figuration. Her works, executed with intense physicality, pay homage to the Renaissance. Jo challenges and reimagines the ideal females depicted throughout history. She reclaims the narrative through a painterly rupture, forming and dissolving figures into a new dimension. Through a level of abstraction, the women become one with the environment, casting invisible lines out that hook you into moments you can never unsee.

Ultimately, both Tarravechia and Jo renegotiate what really happens within our walls, using the canvas and our imagination.

Rachael Tarravechia (b. 1995, United States) received a B.F.A. in painting from The Savannah College of Art and Design in Georgia in the spring of 2018. She has exhibited her work internationally in the United States, Hong Kong, and France. Her work investigates the threshold of private versus public, and aims to capture fleeting, intimate moments -- where the room was just previously occupied, and now there are no people, phones, or cameras, yet the aura of humanity still lingers. Tarravechia lives and works in Brooklyn.

Julia Jo (b. 1991) is a Korean American painter who lives and works in Brooklyn, NY. Born in Seoul, South Korea, she pursued a full-time education in the United States since her childhood. She received her undergraduate degree in fine art and biology at Smith College, Massachusetts, then moved to New York City where she received her Masters in Fine Art from Parsons School of Design at The New School.

Dinner Gallery (formerly VICTORI + MO) is a contemporary gallery dedicated to developing and presenting emerging artists. Since its inception in 2014, the gallery has been intrinsic to experimentation, working collaboratively with artists to realize novel and ambitious projects outside their typical realm. In addition to nurturing artists and mounting exhibitions, the gallery also functions as a center for rigorous intellectual exchange, hosting dialogues, lectures, and other community activities.