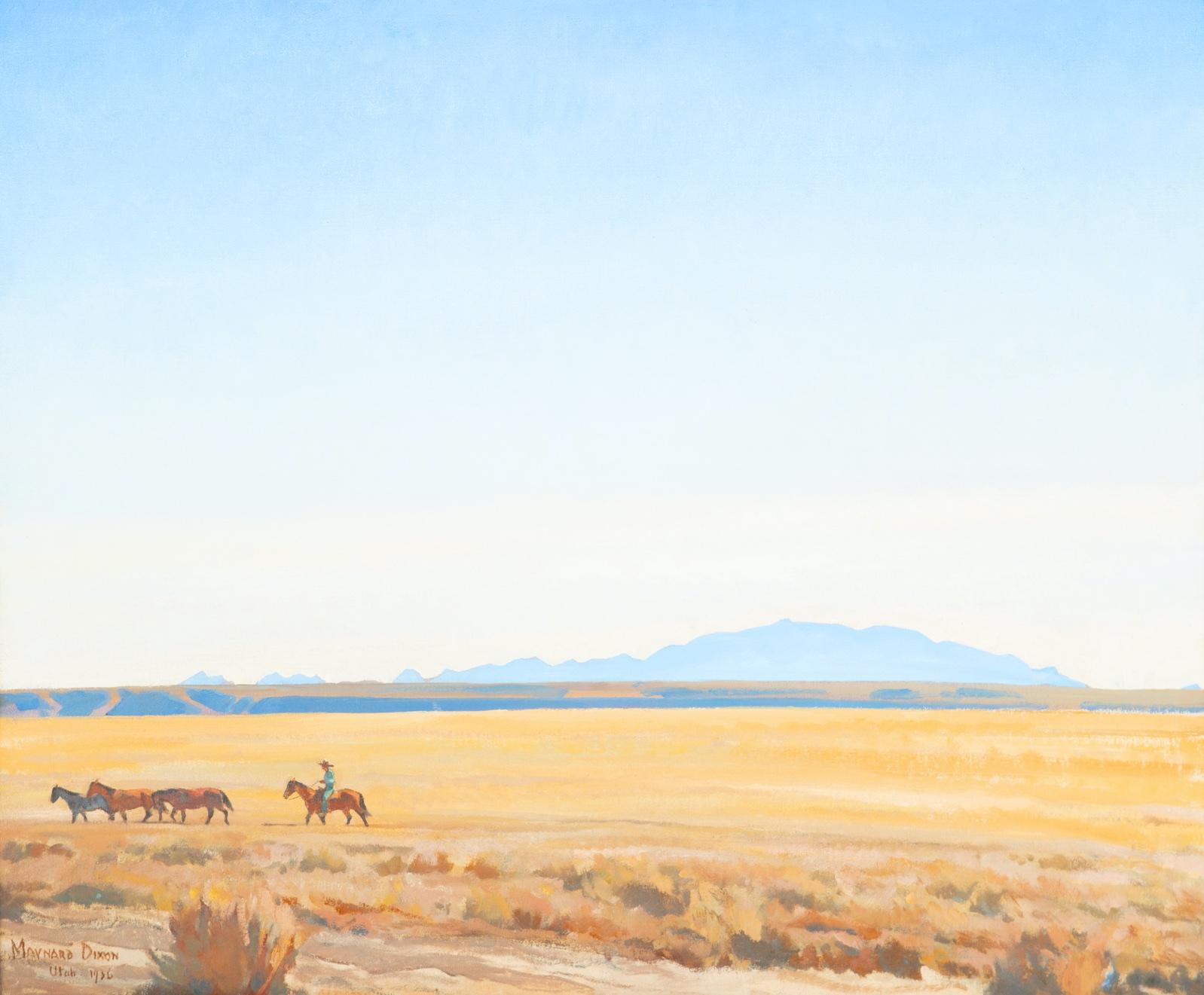 Next month in Los Angeles, Bonhams will present three Western and California Art auctions over the course of two days. Kicking off the series on August 3 is a California Art sale. August 4 will feature the stellar auction highlighting this two-day extravaganza, Portrait of the West: The Diane and Sam Stewart Collection. This will be directly followed by a sale of a selection of fine Western Art. Together, these three auctions will present buyers with a rare and wonderful opportunity to acquire paintings and sculpture by many of the leading artists in these collecting fields.

Portrait of the West: The Diane and Sam Stewart Collection represents a phenomenal selection of Western Art collected over the course of nearly three decades by this venerable Salt Lake City couple. Diane and Sam Stewart have acquired spectacular works by top Western painters and sculptors. The collection features the top lot amongst the entire series of three sales, Ernest Martin Hennings' Indian Horsemen (estimate: $600,000 – 800,000). In this large masterpiece, Hennings' combination of bold colors and soft yellow lighting brings his subjects to life.

Bonhams Western Art Specialist Katherine Halligan said, "The Western and California Art departments at Bonhams will be rife with energy come August. Among the many wonderful works of art on offer during this two-day period, we are especially pleased to present a live single-owner sale of the Collection of Diane and Sam Stewart on August 4. Standing out among the many collection highlights is Ernest Martin Hennings' Indian Horsemen. Works of this size and complexity are extremely rare in the market today, as most comparable examples have found their way into museum collections, never to come to auction." 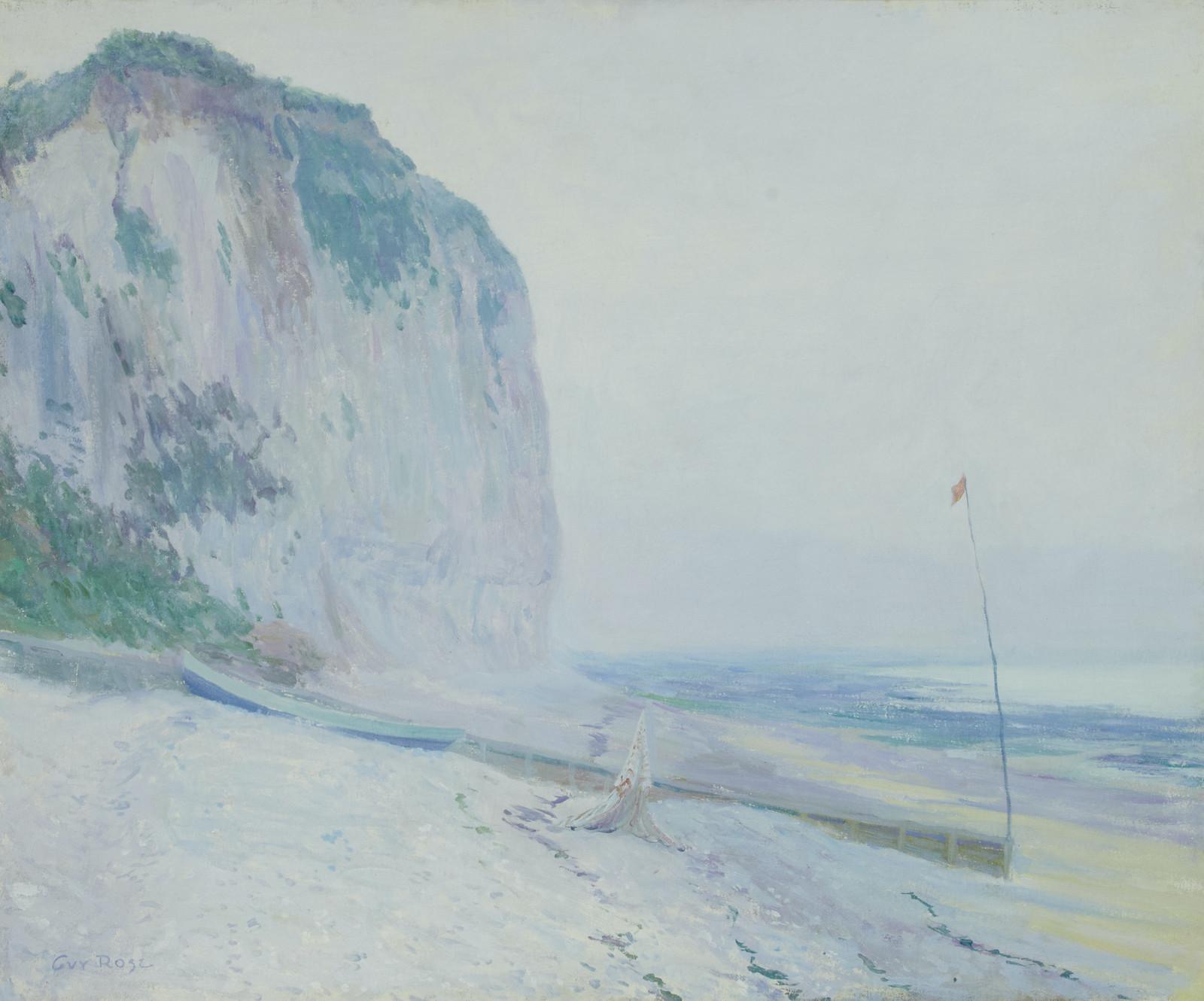 The excitement will begin Tuesday afternoon with the California Art auction, which will include important works by top plein air artists such as Guy Rose, Granville Redmond, Edgar Payne, William Wendt, Armin Hansen, Joseph Kleitsch, Franz Bischoff and Jessie Arms Botke. Leading the sale is a painting by Guy Rose (1867-1925), Foggy Morning, Veules (Normandy Coast). In the early 20th century, Rose left behind his native California to spend time in Giverny with modern master Claude Monet, who became a close friend and mentor to the artist. In this depiction of the coast of northern France, Rose brings colorless morning fog to life, extracting the various muted tones within the shoreline outward to the canvas's edges. The work is estimated at $200,000 – 300,000.

Bonhams Director of Fine Arts Scot Levitt commented, "Guy Rose spent the majority of his life in California but also spent a decades-long tenure working and studying in France at a time that was pivotal in the history of art. As a result, Rose's body of work is incredibly rich and embodies an international sensibility. In Foggy Morning, Veules (Normandy Coast), the artist deconstructs soft, atmospheric colors to depict a stunning landscape, nearly blurring the lines of figuration and abstraction."

Another highlight in the California Art sale is The Sierra Divide (1921) by Edgar Payne. The years 1921 to 1923 are largely considered to be the period during which the artist produced his best work; this painting is among the finest examples. The grid-like brushwork of color with brightly lit accents amplifies the grandeur of the Northern California landscape. Payne's name came to be so closely linked with his portrayals of the California Sierras that editor for The Los Angeles Times Fred Hogue dubbed him "God of the Mountains." The work is estimated at $125,000 – 150,000. 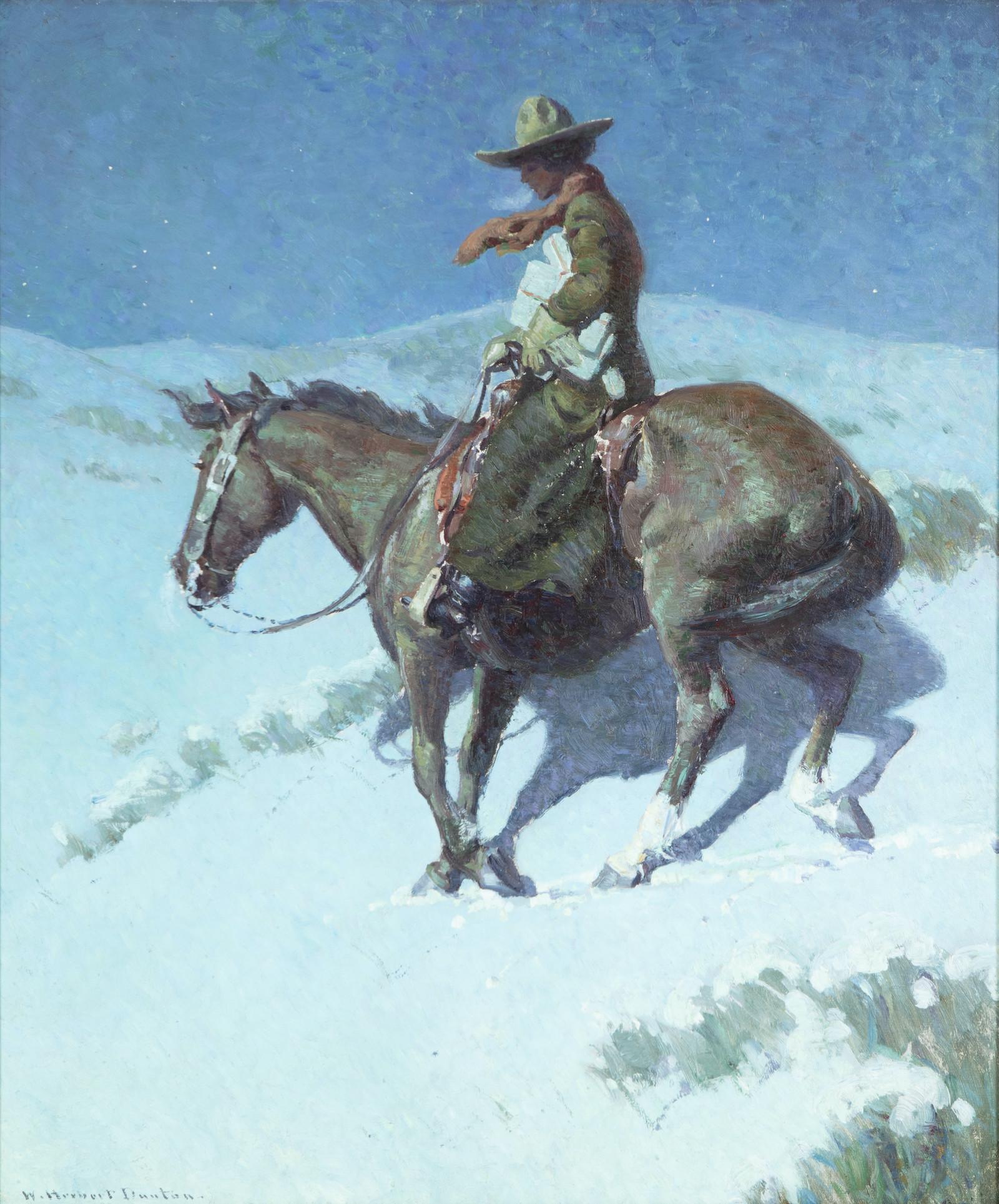 Portrait of the West: The Diane and Sam Stewart Collection
Wednesday, August 4, 2021
10:00AM PDT

The second sale of the series will be Portrait of the West: The Diane and Sam Stewart Collection. This dedicated sale consists of 100 paintings, sculptures, and fine prints by artists such as Thomas Moran, Albert Bierstadt, Joseph Henry Sharp, Eanger Irving Couse, William Robinson Leigh, Maynard Dixon, Ernest Blumenschein, Cyrus Dallin and Gustave Baumann. In addition to the crown jewel of the week, Ernest Martin Hennings' Indian Horsemen, the sale is highlighted by a wonderful example by Victor Higgins, Pink and Black (Still Life) (estimate: $400,000 – 600,000). This work is one of only a few known early still lifes dating to Higgins' 'First Taos Period' and is considered an important studio painting before he turned his attention to capturing the Taos landscape. Higgins uses broad and thick strokes to sculpt large planes of color, particularly in the fabric draped across the table and the satin tablecloth. The work also shows a sophisticated pairing of complementary and tonal color relationships bringing staccato contrast and legato harmonies to this otherwise quiet scene. Pink and Black (Still Life) represents the Taos school of painting at its finest. 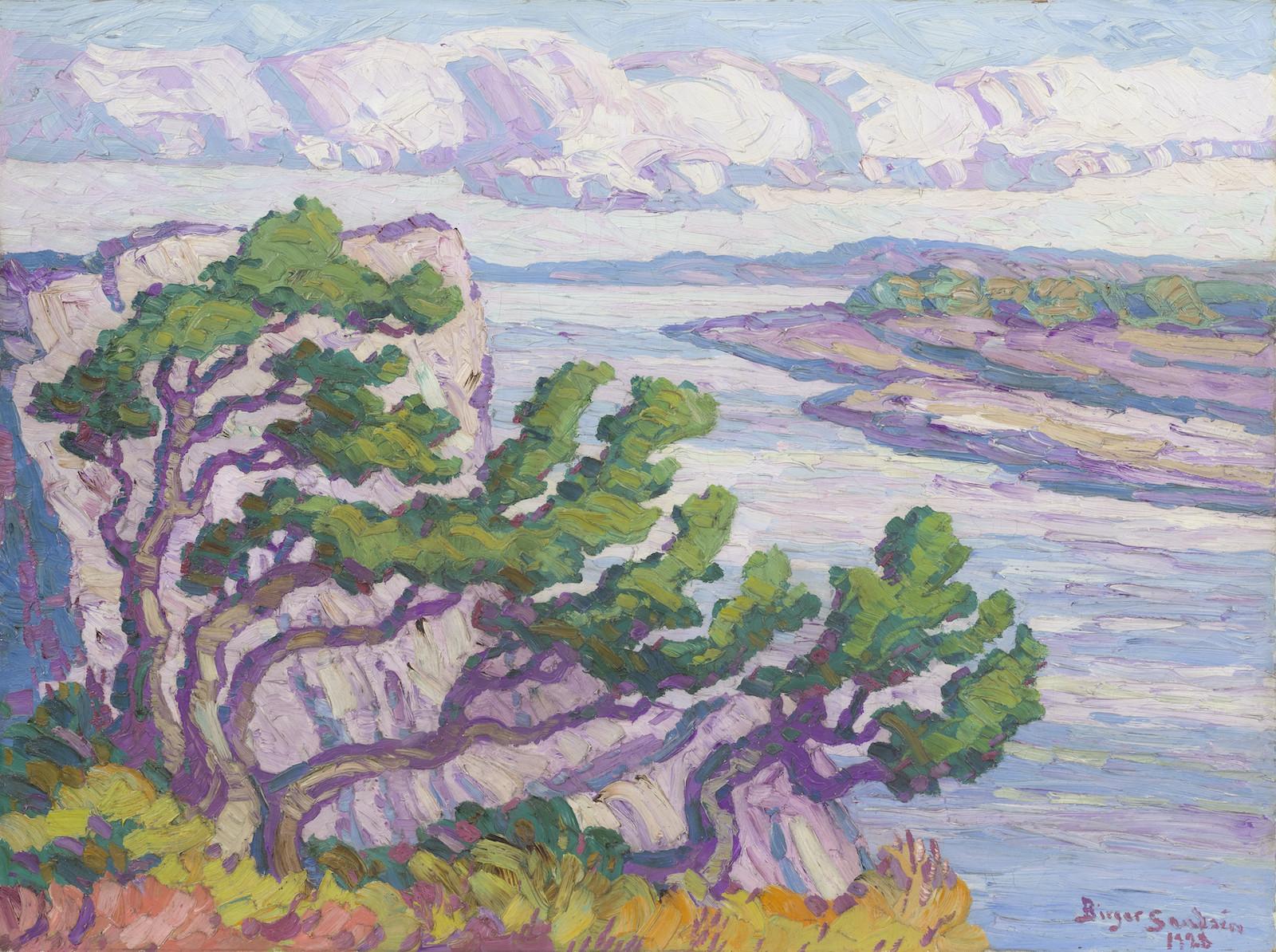 Directly following the Diane and Sam Stewart Collection single-owner sale, Bonhams will close the series with an auction of fine Western Art. It will include marvelous examples by Western artists such as Edward Borein, Adolph Alexander Weinman, Maynard Dixon, Cyrus Dallin, Gordon Snidow, Eustace Paul Ziegler, Mian Situ and Kenneth Riley. Highlighting this sale is Birger Sandzén's Riverbank with Cedars, Rocheport, MO (estimate: $50,000 – 70,000). Painted on a bluff above the Missouri River, the painting's central focus is a grouping of colorful cypress trees twisting inward on the canvas against a backdrop of pastel blue and violet water, rock, and sky. Best known for his landscape paintings, Sandzén also worked as professor of art and art history at Bethany College for over 50 years. He was a lifelong advocate of the local arts community, working to organize clubs, exhibitions, and lectures. In 1922, he was elected an associate member of the Taos Society of Artists and was selected among the group to be the star of a solo exhibition at the Babcock Gallery in New York.

Another highlight in the Western Art sale is Voice of the Deep Quiet by Roy Andersen. At the start of his career, Andersen worked as an illustrator and muralist, working for top periodicals including National Geographic, Sports Illustrated and TIME, and receiving mural commissions from leading organizations including the National Parks Service. In the 1980s, he began to focus primarily on his fine art practice centering on Western Art; in 1989 he was admitted as a member to the Cowboy Artists of America. Voice of the Deep Quiet is a strong example of the artist's passion for Native American subject matter and his ability to impart emotion and meaning through detail, color and atmosphere. It is estimated at $30,000 – 50,000.