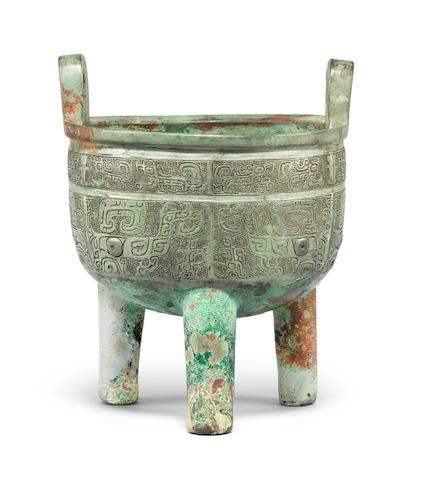 A very rare pair of monumental fahua Buddhist lions on stands, Late Ming Dynasty, 16th/17th century, measuring over 2 meters high, are estimated at £150,000 - 250,000 (Lot 70). This outstanding pair belongs to a specially commissioned statuary group that served as guardians, most likely for an important temple. Very few related sculptures of such massive proportions have survived, making this pair exceptionally rare. They were formerly in the collection of Audrey B. Love, a philanthropist and patron of the arts, and the daughter of Edith Guggenheim and Admiral Louis Josephthal, and were previously with the eminent Chinese art dealer C.T. Loo.

A large selection of Buddhist art includes a rare and large painting of the Cosmic Buddhas, East Tibet, 14th/early 15th century, which is estimated at £130,000 - 150,000 (Lot 107). This painting is a rare early surviving example depicting four of the Five Cosmic Buddhas. Unusually, the painting fuses elements of Tibetan pictorial traditions with Chinese stylistic conventions.

A select number of imposing lacquer screens will be offered, including a rare coromandel ten-leaf lacquer 'Palace' screen, cyclically dated to the Dingmao year, corresponding to 1687 and of the period, estimated at £70,000-100,000 (Lot 71); and a magnificent and rare twelve-leaf double-sided coromandel lacquer screen, Kangxi period, from a Royal Collection, which is estimated at £60,000-80,000 (Lot 75). Such screens were expensive and laborious to produce, and were aimed at high-ranking officials, scholars and gentry who commissioned them to commemorate important events. Also offered in the sale are a number of Imperial textiles including a rare Imperial yellow-ground embroidered 'nine dragon' kang cushion cover, Qianlong, estimated at £30,000-50,000 (Lot 74).

Learn more about this item at auction.
Tags
Bonhams