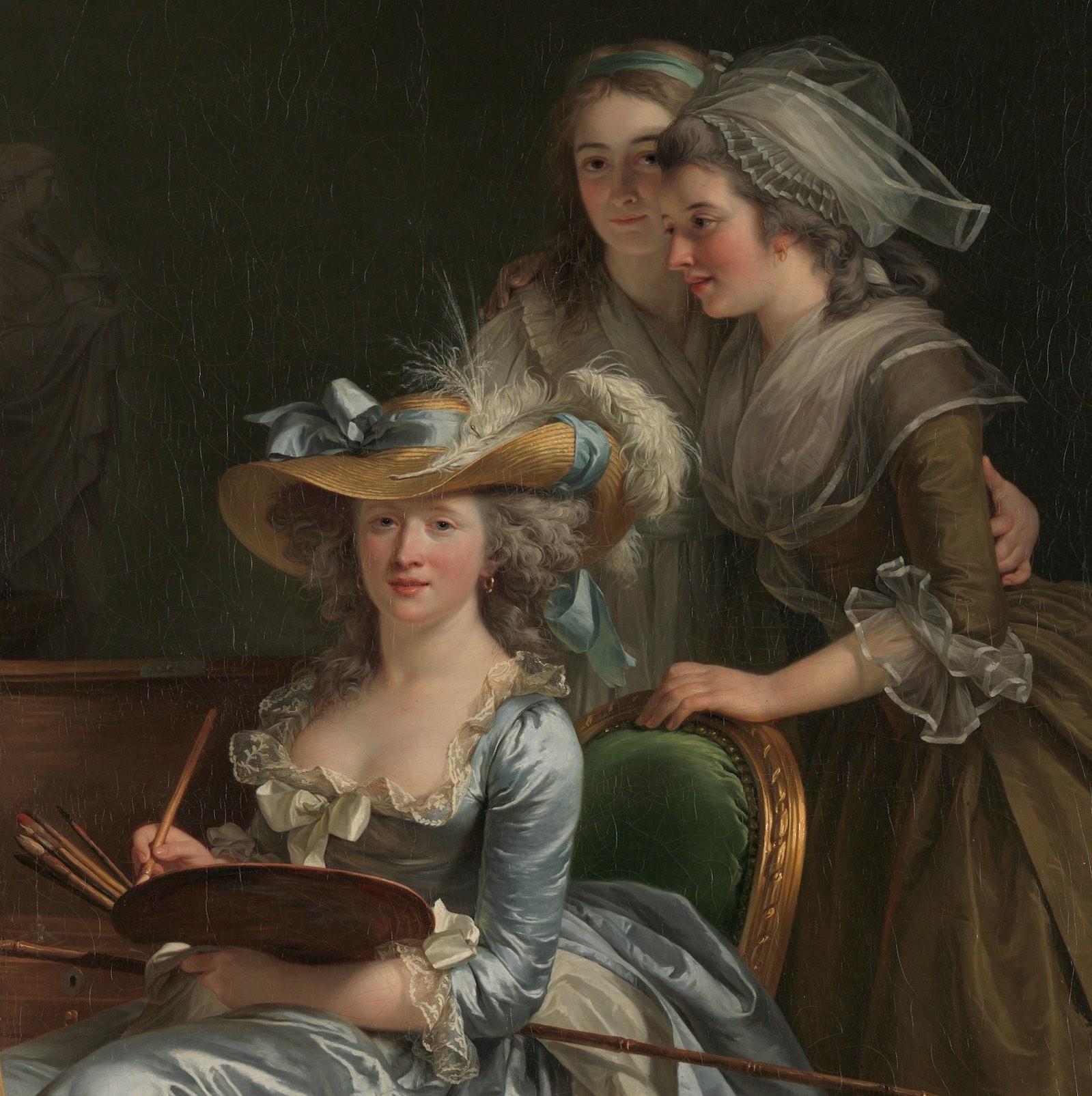 Adélaïde Labille-Guiard, Detail of Self Portrait with Two Pupils, 1785.

It is noteworthy how studying a painting changes one’s perception of it. This author remembers seeing this painting as a child, marveling over its beauty and glamour, the gorgeous hairpieces and lush folds of cloth.

The fashion in Self-Portrait with Two Pupils, Marie Gabrielle Capet (1761-1818) and Marie Marguerite Carreaux de Rosemond (b. ? —1788) is certainly glamorous, but the reason for its existence in the artwork is far more glaring.

The self-portraitist of this 1785 painting, who is featured sitting at the easel, is Adélaïde Labille-Guiard. Then thirty-five, Labille-Guiard, was one of four female members of the Royal Academy of Painting and Sculpture in France; four was the maximum number of women allowed by the King, Louis XVI, who reigned from 1774 to 1792. 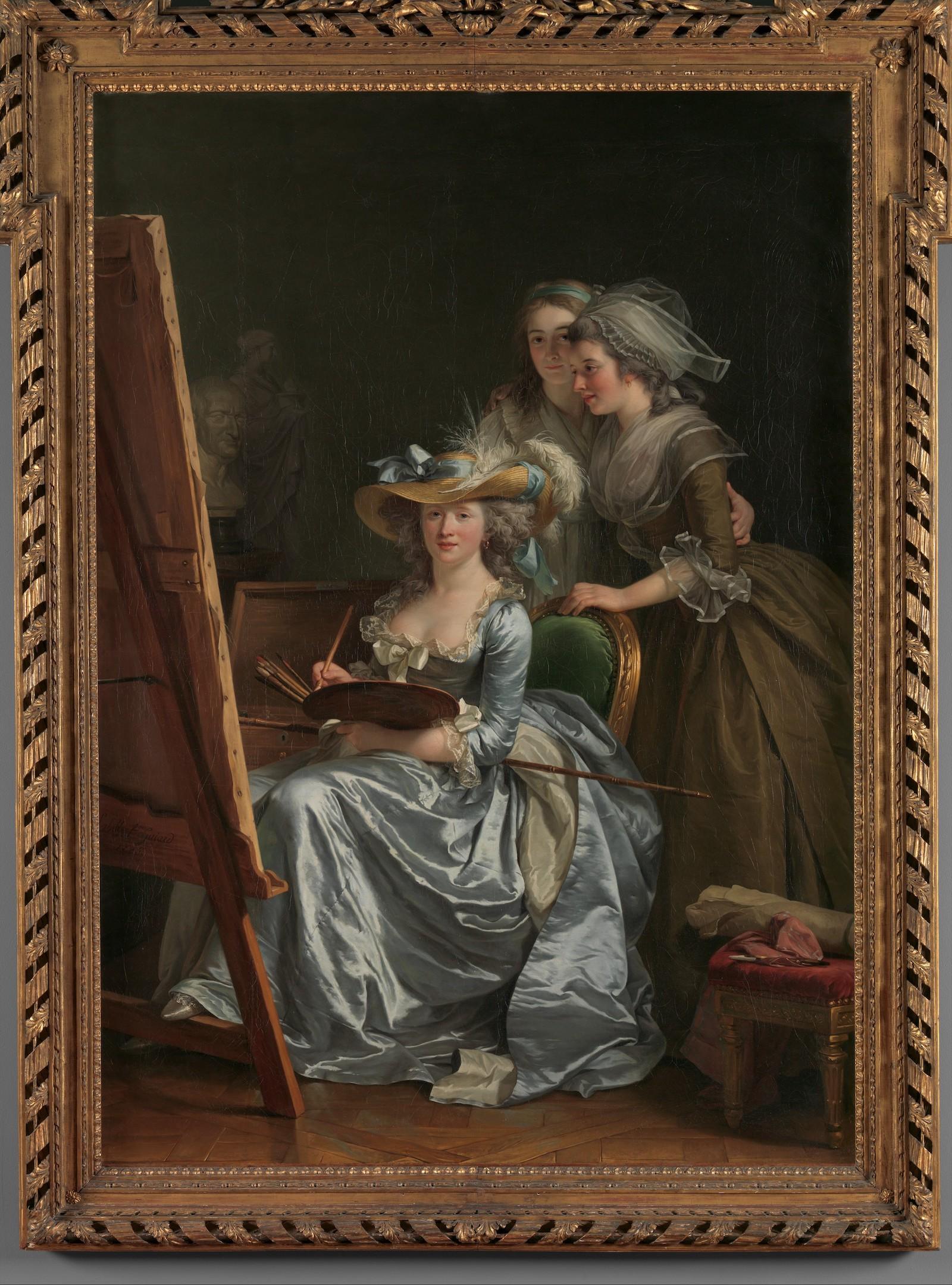 All of those seemingly glamorous designs incorporated in the painting were Labille-Guiard’s way of showing that in her line of work, women had to look more glamorous, less haggard, than men doing the same job.

This self-portrait, exhibited in Paris in 1895, came with a caption from an unnamed male art critic noting that “this woman” often had critics assume the work had been painted by a man, because no woman would have been capable of this quality of painting.

Upon being told the painter was female, men were shocked. The unknown male critic paraphrased the artist’s frustration: "as if my sex were to be eternally condemned to mediocrity."

Consequently, she felt compelled to portray herself as unthreatening, what we today would call "put together." She purposefully parodied prejudice by asking her companions to wear head decorations indoors and wearing a fancy hat herself, uncommon indoors at the time.

It was a defiant project. 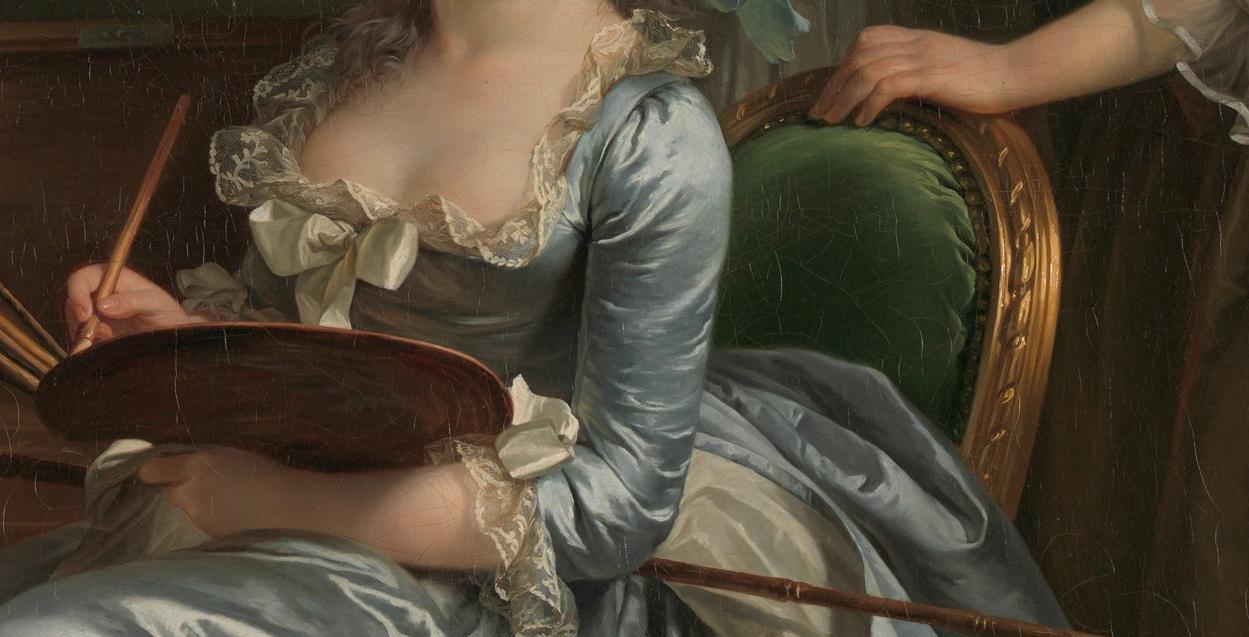 Adélaïde Labille-Guiard, Detail of Self Portrait with Two Pupils, 1785.

A particularly contextual fact lost to history? At the time this work was created, cleavage was not considered sexual, but ankles were. You, dear reader, may be drawn to Labille-Guiard’s cleavage, but at the time, eyes would have been drawn to that persnickety slipper peeking out from under her dress. 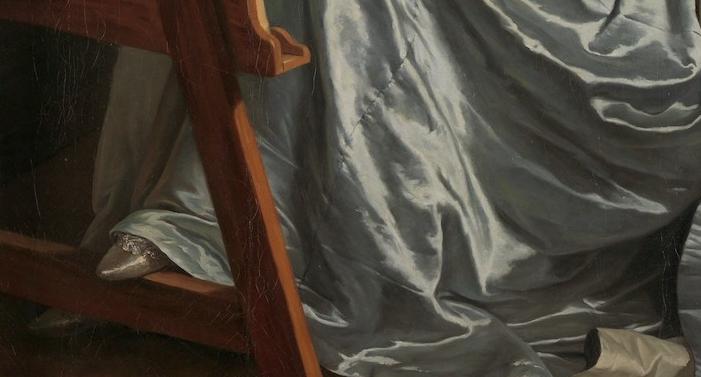 Adélaïde Labille-Guiard, Detail of Self Portrait with Two Pupils, 1785.