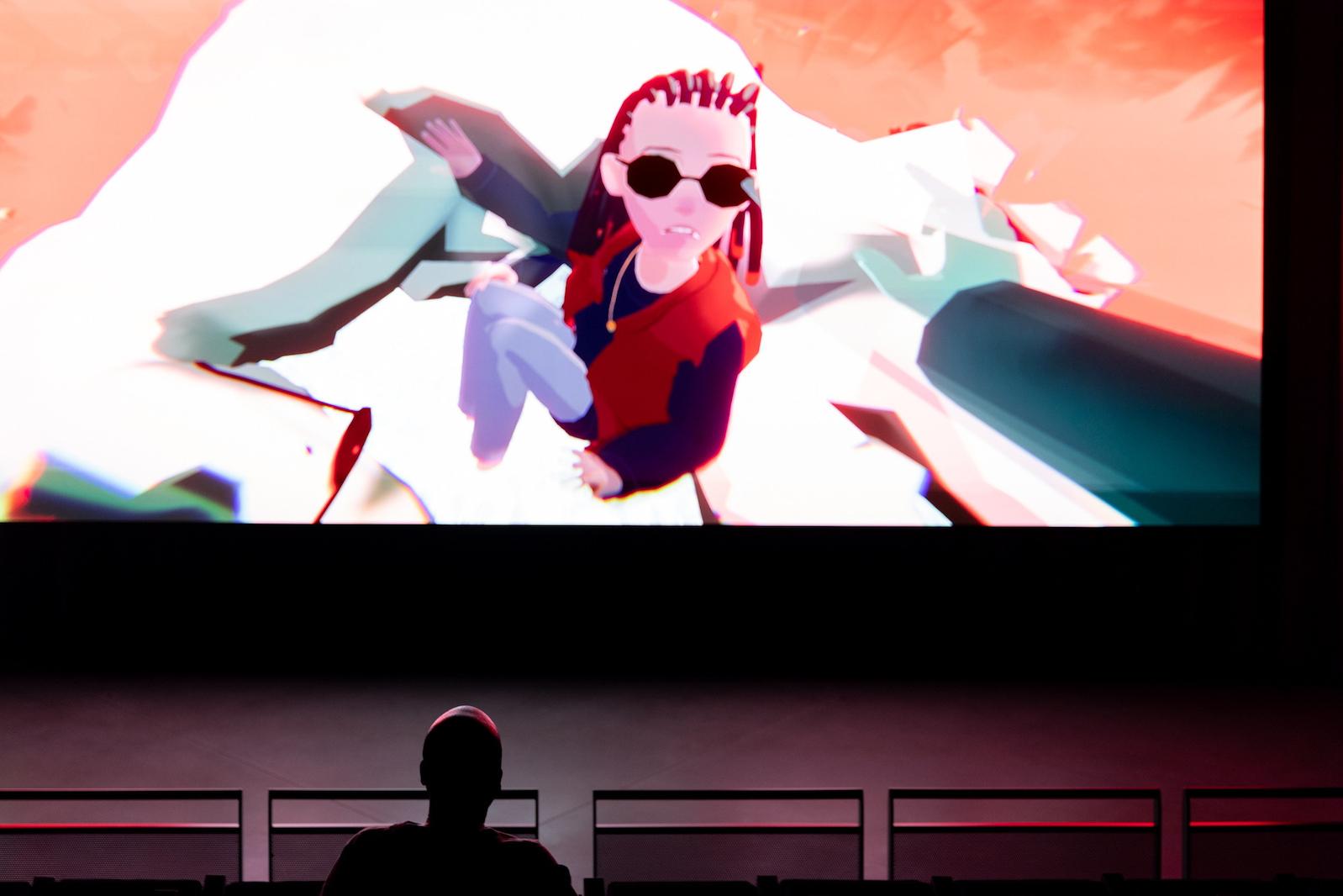 Given that the internet has already eroded society’s trust in facts, democracy, and science—one can only imagine what fresh dystopian hell will be ushered in by the spread of artificial intelligence. AI is already with us in nascent form, but Ian Cheng’s feature-length animation, Life After B.O.B. offers one artist’s vision of what we can expect once it’s truly matured. Cheng depicts a future some forty to fifty years hence in which an algorithmically generated consciousness has replaced free will.

Currently on view at The Shed, Life After B.O.B. isn’t a conventional video installation that repeats on a loop. Rather, it was created with a gaming engine called Unity, a software program that allows amateur coders to devise digital divertissements along the lines of Call of Duty or Minecraft. Accordingly, Life After B.O.B. plays out in real-time as the engine continually refreshes content that can be altered at any point. Cheng presents two separate versions of Life After B.O.B. running simultaneously in two different theaters: one that spools out as an uninterrupted narrative, and another that can be played by audience members using a downloadable app that turns their phones into video game controllers. In effect, the actionable nature of Life After B.O.B mirrors the vicissitudes of life that one of Cheng’s major characters attempts to regulate through technology. 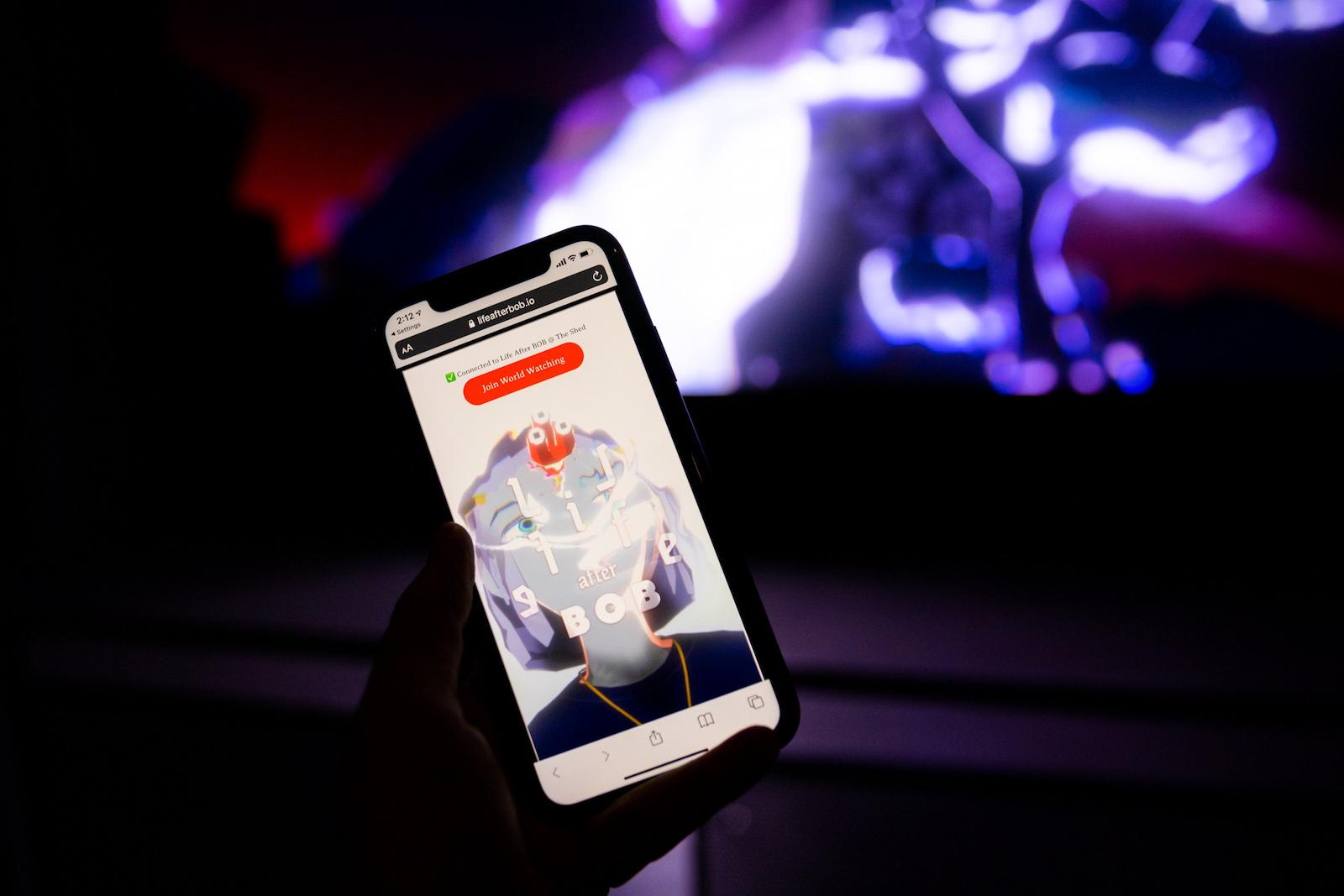 That would be Dr. James Moonweed Wong, a developer working for Zoroaster Immeasurables (ZIM), a “neural AI life path company,” as the exhibition’s wiki page explains, that produces “wetware”—applications that plug directly into the body through the titular B.O.B. (Bag of Beliefs), a kind of metallic worm engineered by Wong to merge with the spinal column. Its most sophisticated iteration, the Destiny B.O.B, can take over a subject’s life in a process called “permadroning.” In an experiment ahead of an eventual product launch, Wong implanted his now ten-year-old daughter Chalice with her own Destiny B.O.B at birth and dubbed the project “The Chalice Case Study.” The story that follows is as chaotic as it is complex.

This commercialization of fate, as it were, depends on a construct called the Wavyverse, “a neural mental medium in which people can compose and share dream-like experiences directly with each other’s nervous systems.” The Wavyverse is traversed by wavecasting, a type of social media activity that allows a person to publicly stream “a curated combination of one's nervous system activities” (and just like today’s internet, wavecasting is exploited by self-promoting influencers). For those not into sharing, a “conflux” allows one to create a “private mental space” where “objects, scenarios, emotions, and physical sensations” can be conjured at will. Chalice bounces through the Wavyverse’s various hallucinogenic permutations in a mise-en-scène that’s inordinately complicated—which is why it’s advisable to peruse the show’s aforementioned website before visiting.

This is B.O.B.’s second appearance in Cheng’s work. The first was an eponymously titled 2019 installation at Barbara Galdstone gallery in which B.O.B. occupied a vitrine-like space created by a massive grid of flatscreens. There’s no plot, only B.O.B. itself, ready to engage the viewer—an interaction that also transpired via smartphone. This B.O.B could be considered proof of concept for the one at The Shed, except that it’s reactive—awaiting, for example, visitors to bestow gifts upon it from a preselected list of choices (some of which killed B.O.B., though it quickly re-generated). The Destiny B.O.B, however, is proactive—a real-world application that threatens to supplant reality.

This irony is the crux of Cheng’s tale, as Chalice navigates the perils of growing up through B.O.B. Now and then, she breaks “contract” (an interesting use of word) with her B.O.B., as the realization that her life is not her own begins to dawn. Meanwhile, Wong comes to favor the B.O.B. version of his daughter (whom he names Chyna Horchow and calls “my perfect girl”) over his actual one. Eventually, at age twenty, Chalice is liberated from B.O.B. for good.

An exercise in world-building that’s as dense as Life After B.O.B. can only be retold in the broadest of strokes, so your mileage sitting through it may vary depending on your attention span. Still, it’s a fascinating twenty-first-century meditation on basic existential questions: Who am I? Why am I here? Where am I going?

The road to self-discovery begins, of course, with childhood and it’s no accident that Cheng conceived his piece after becoming a father. In an interview with the New York Times, he noted that Dr. Wong’s greatest mistake was conflating his work with his daughter. But every parent is essentially a programmer, inculcating (or not) their progeny with values, ambitions, and sense of worth. The final takeaway from Life After B.O.B., perhaps, is that whatever highway they choose, every child, like Chalice, is ultimately a case study.

"Life After B.O.B." at The Shed
The Shed
New York, NY
Find Out More
About the Author

Howard Halle is a writer and artist who has exhibited his work in the United States and Europe. Between 1981 and 1985, he was Curator of The Kitchen's Gallery and Performance Art series. From 1995 through 2020, he was Chief Art Critic for Time Out New York. He lives and works in Brooklyn.