How Pastoral Landscapes Paved the way for Cottagecore 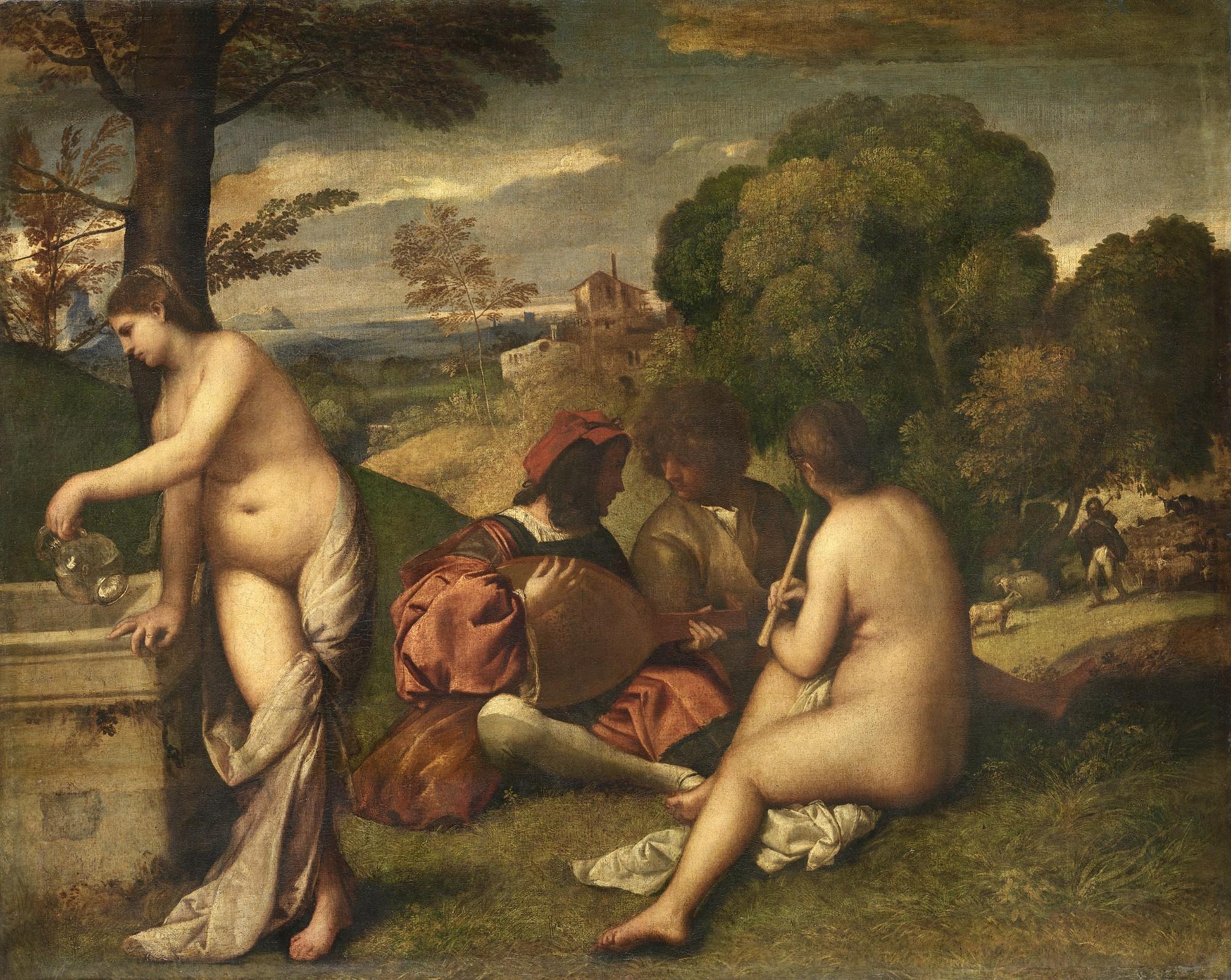 Amid very geometric-forward dance sequences and pranks, the short-form-video social network TikTok has a surprisingly artistic and visual-culture-oriented side: vast landscapes accompanied by classical music, girls clad in white, billowy gowns dashing across a field or a meadow, close-ups of wildflowers about to be collected into a bunch.

This contemporary pastoral reverie is known as cottagecore, and it’s one of the visual trends that defined 2020, in sharp contrast with (and perhaps, in reaction to) the apocalyptic mood set by current events, in a pandemic that has, so far, claimed one million lives and infected almost 40 million people.

In art history, it has an illustrious precedent in pastoral art, an art form that was at the height of its popularity between the sixteenth and seventeenth century, when artists, with their art, retreated to an idyllic countryside in response to the political upheavals of the time.

Humankind always longed for a respite from urban life, a tendency well documented in the arts since the Hellenistic era (third century BC). There was an idealized landscape known as Arcadia: geographically, it was a region in the innermost part of the Peloponnese peninsula, but in practice, it just indicated an eternal spring replete with verdant nature, gurgling streams, flowers, and fruits that grow without much human labor.

Pastoral art, in particular, depicted an idealized landscape heavily influenced by the descriptions of Greek poet Theocritus (316-260), who wrote pastoral poetry known as Idylls, meant for an effete urban audience longing for the countryside while retaining their sophistication, with shepherds engaging in poetic challenges. The poet who brought the imagery of Theocritus to Rome was Virgil, whose Eclogues present a context not too dissimilar from Theocritus’s work, but where the tensions of the late stage of the Rome republic seeps in. Regardless of this main difference, though, it’s a landscape populated by bountiful trees, gurgling streams, bees and other summertime insects, and only pleasant fragrances of nature. With those sensory descriptions, what they expressed was a sensual love of nature. 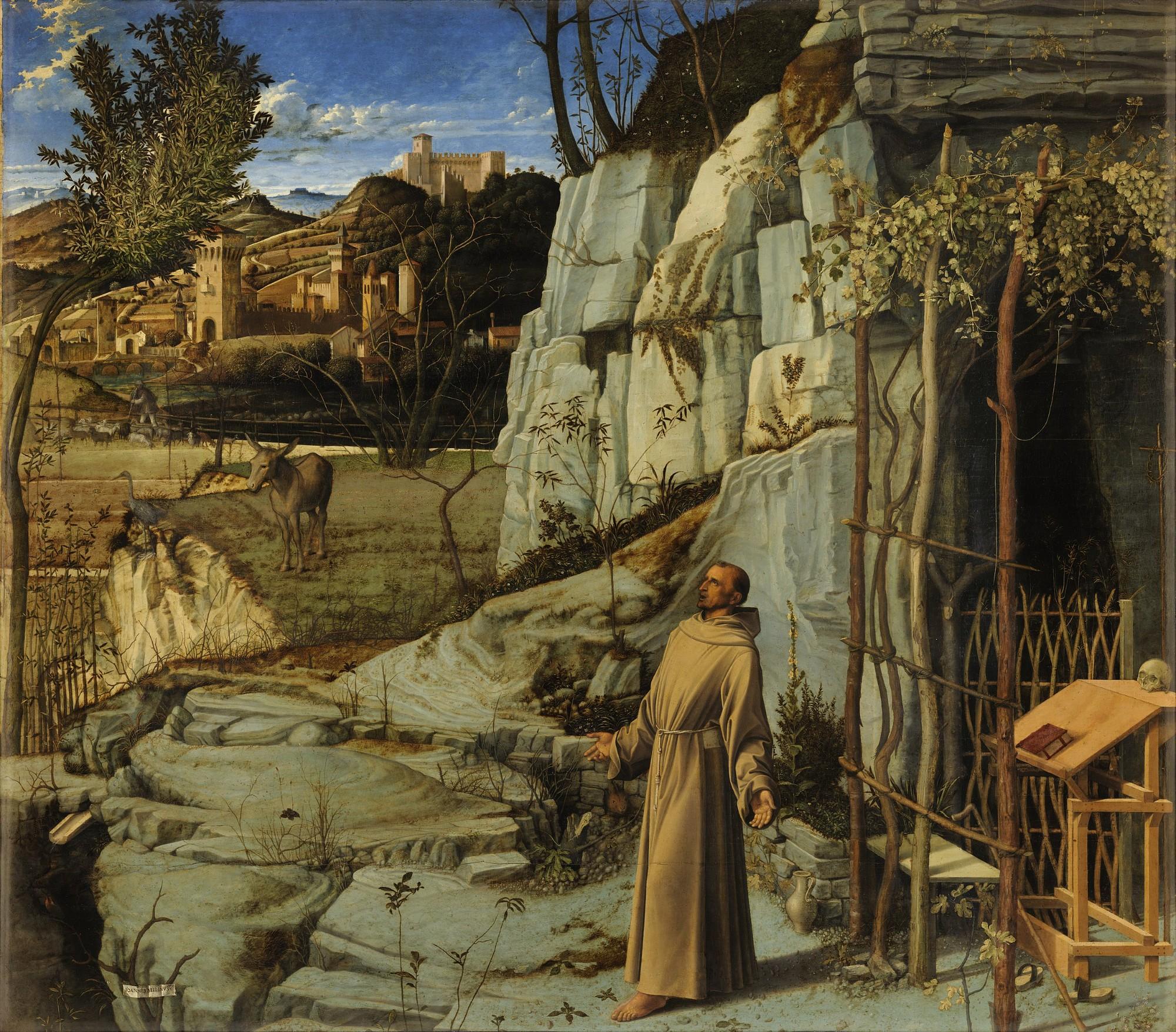 These characteristics found fertile ground in Renaissance art: the best known pastoral literary work is the 1480s poem Arcadia by Jacopo Sannazaro, which translated the classical Arcadian vision into a contemporary era. His own Arcadia had perpetual spring, sensuality, and a landscape that was both placidly bucolic and yet untamed. “woods and hills of the most delightful beauty, full of leafy trees and a thousand sorts of flowers, among which were seen the many herds at pasture, winding with pleasure through the green field.”

And while Arcadia was heavily referenced in Florentine literature, painters in the Medici circle were not as preoccupied with landscape painting. By contrast, the Venetian school of painting was. St. Francis of Assisi in Ecstasy (1475-80) by Giovanni Bellini, for example, has the surrounding countryside scenery almost obfuscating the trial of St. Francis.

His pupil Giorgione, with the help of Titian, painted Fete Champetre (1510), who transformed the everyday landscape of woods and fields into the sensual, pagan world of Theocritus, Virgil, and Sannazaro. The medieval fear of nature is replaced by the delight of the senses. It depicts four figures, two in the nude and two fully dressed in refined garb, located in an idealized countryside, but with an urban landscape in the background. “Together, Giorgione and Sannazaro helped create a timeless pastoral, a dream world, into which the tired, jaded viewer or reader could escape. Giorgione’s lasting achievement was to portray all of the elements–earth, sky, clouds, trees, people and buildings–as one unity, a landscape,” wrote Allan R. Ruff in the scholarly work Arcadian Vision. 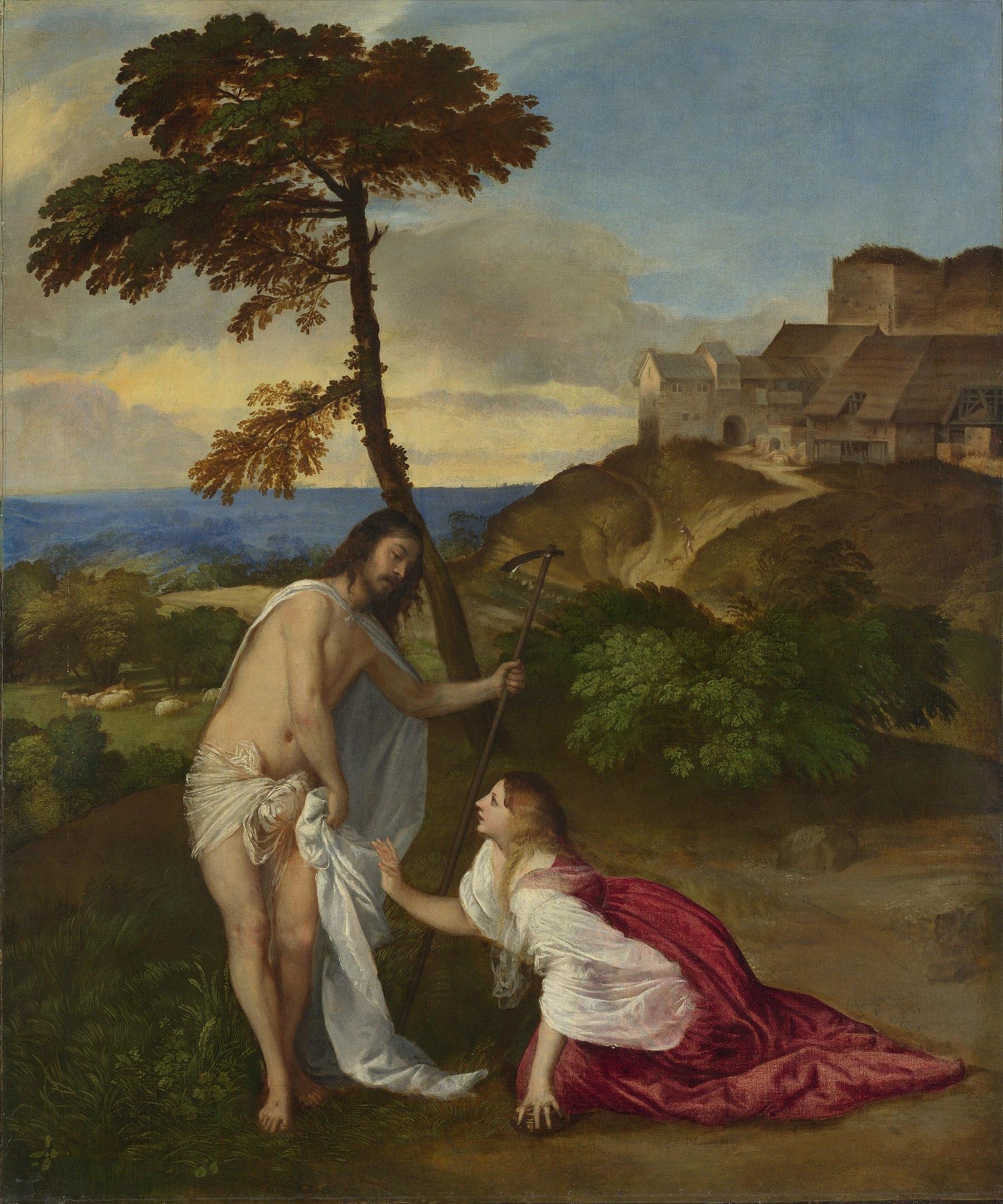 Titian (1488-1576) added another layer to pastoral art, combining the pagan delights of Arcadia with Christian elements: king David was, much like the character in Theocritus and Virgil’s poems, a shepherd and a musician, while the whole imagery surrounding Christ is rooted in pastoral metaphors (the Good Shepherd, the Lamb of God). In the painting Noli me Tangere, Titian portrays the epitome of the Christian Arcadian pastoral, depicting Christ meeting the Magdalene in a landscape that we can easily define as bucolic.

Pastoral art moved beyond Italy in the sixteenth century and, by the seventeenth century, Nicolas Poussin (1594-1665), an eminent painter in the classical French Baroque style, became known for his pastoral art, even though he mainly specialized in more flamboyant myths. 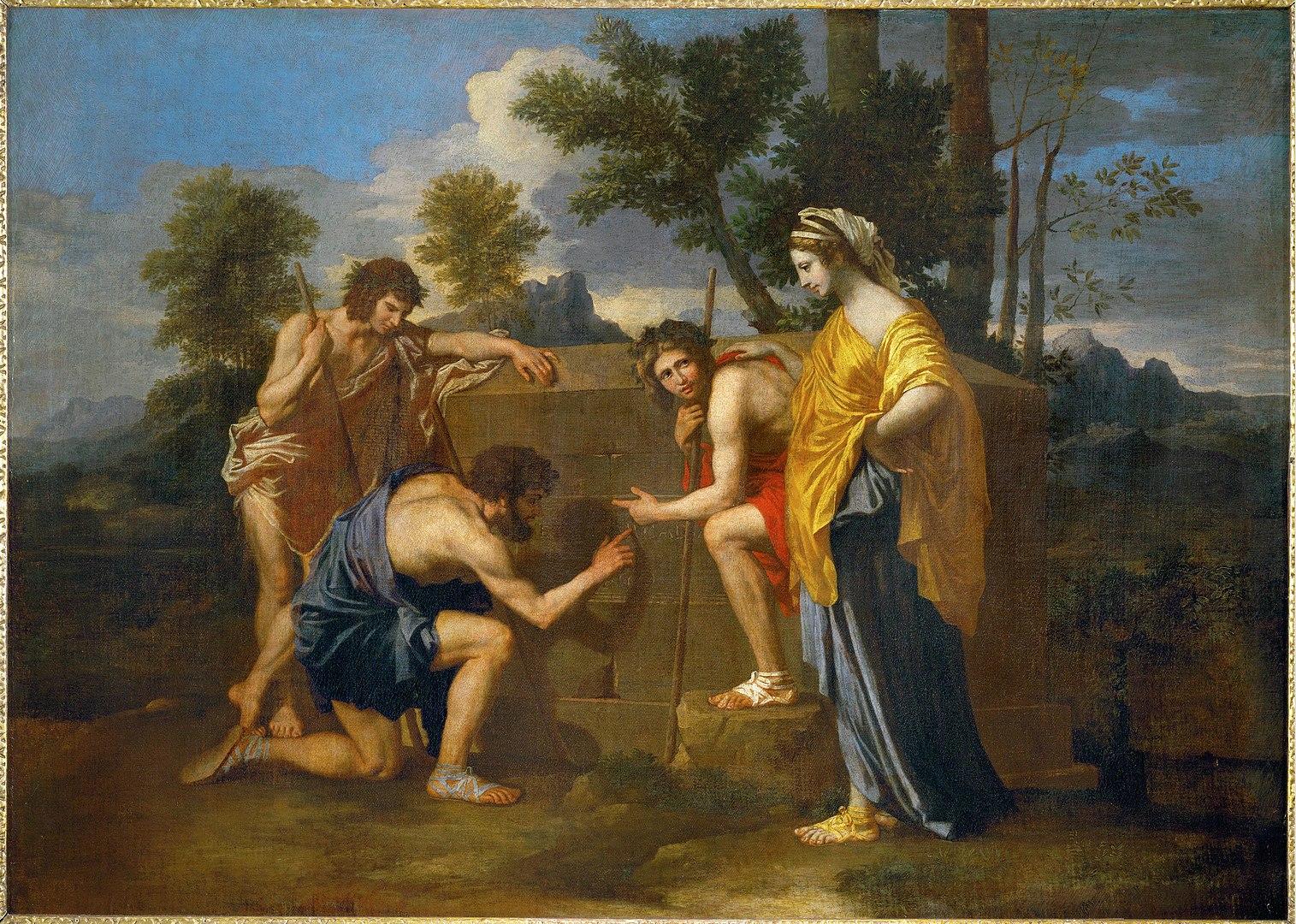 His two paintings Et in Arcadia Ego, which means “Even in Arcadia, I [am],” with I being Death, juxtaposes the threat of death with the merriment of shepherds and nymphs in Arcadia. They both depict a group of shepherds and one shepherdess observing a tombstone. The source is Virgil’s fifth eclogue, where a tomb with a memorial inscription appears in an idyllic setting. In the later version, one of the two shepherds recognizes the shadow of his companion as he had cast it on the stone, and traces it with his finger. That gesture can be interpreted as art’s power of making someone immortal.

From the middle of the eighteenth century, a new attitude to nature and landscape had begun to emerge, led not by the aristocracy but the aspiring professional class of doctors, clergymen and country squires. Many of these gentlemen had not experienced the Grand Tour or received a classical education. No longer bound by ideas derived from classical sources, they began to look at landscape as it really was–a purely sensory response to the world around them. But throughout the eighteenth century, the perception of nature and the landscape continued to evolve. 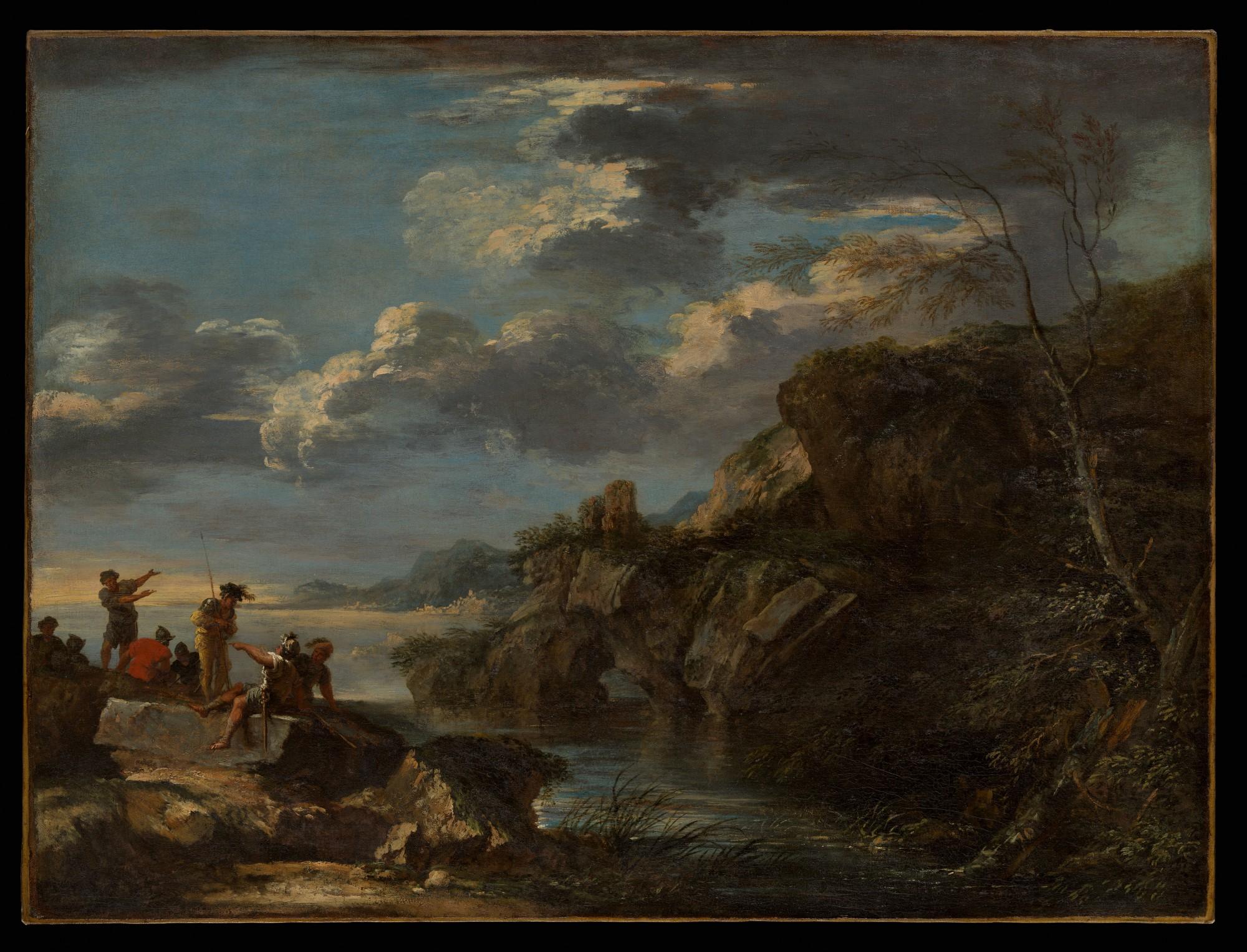 What tipped the scale was the creeping notion of beauty as Sublime, which argued against the renaissance ideal of harmony and proportion, in favor of a subconscious emotional response. The painter Salvator Rosa, despite being from the seventeenth century, depicted craggy cliffs, broken trees, and desolate landscapes, which were, in all, Romantic, even though romanticism was circa 150 years away. By the time romanticism rolled in, it was the unbridled power of nature and its majestic and hostile characteristics that interested the arts. “Arcadia” remained a classicized vestige of the waning fascination with Greek and Roman antiquity.