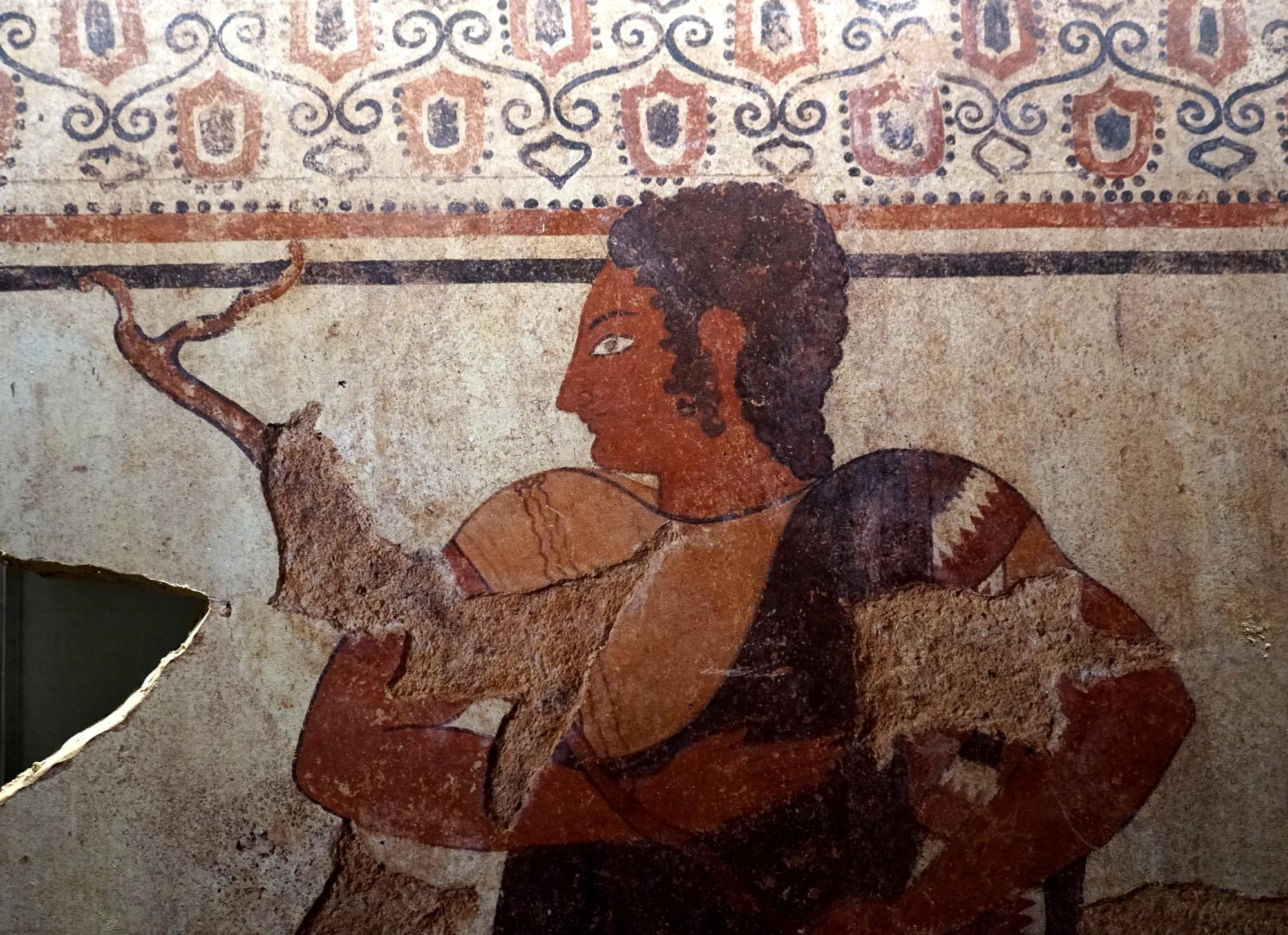 Athletic's trainer, 6th century BC. Copy of the original now preserved in the Getty Museum.

Sometimes overshadowed by their Roman neighbors, the Etruscans were one of the principal peoples of ancient Italy. Comprising a loose confederation of cities, they dominated a large area of the Peninsula, including the region of modern-day Tuscany, between the eighth and fifth centuries BC.

The richness of Etruscan artistry is currently on show in an exhibition at Museo Centrale Montemartini in Rome. The Colors of the Etruscans (curated by Alfonsina Russo, Claudio Parisi Presicce, Leonardo Bochicchio, Daniele Federico Maras, and Rossella Zaccagnini) brings together a superb series of terracotta frescos and sculpture, which once decorated the walls and roofs of temples, houses, and tombs. Although many of the pieces are fragmentary, they still reveal the excellence of Etruscan molding and painting; through the subjects depicted, they provide an insight into Etruscan society. 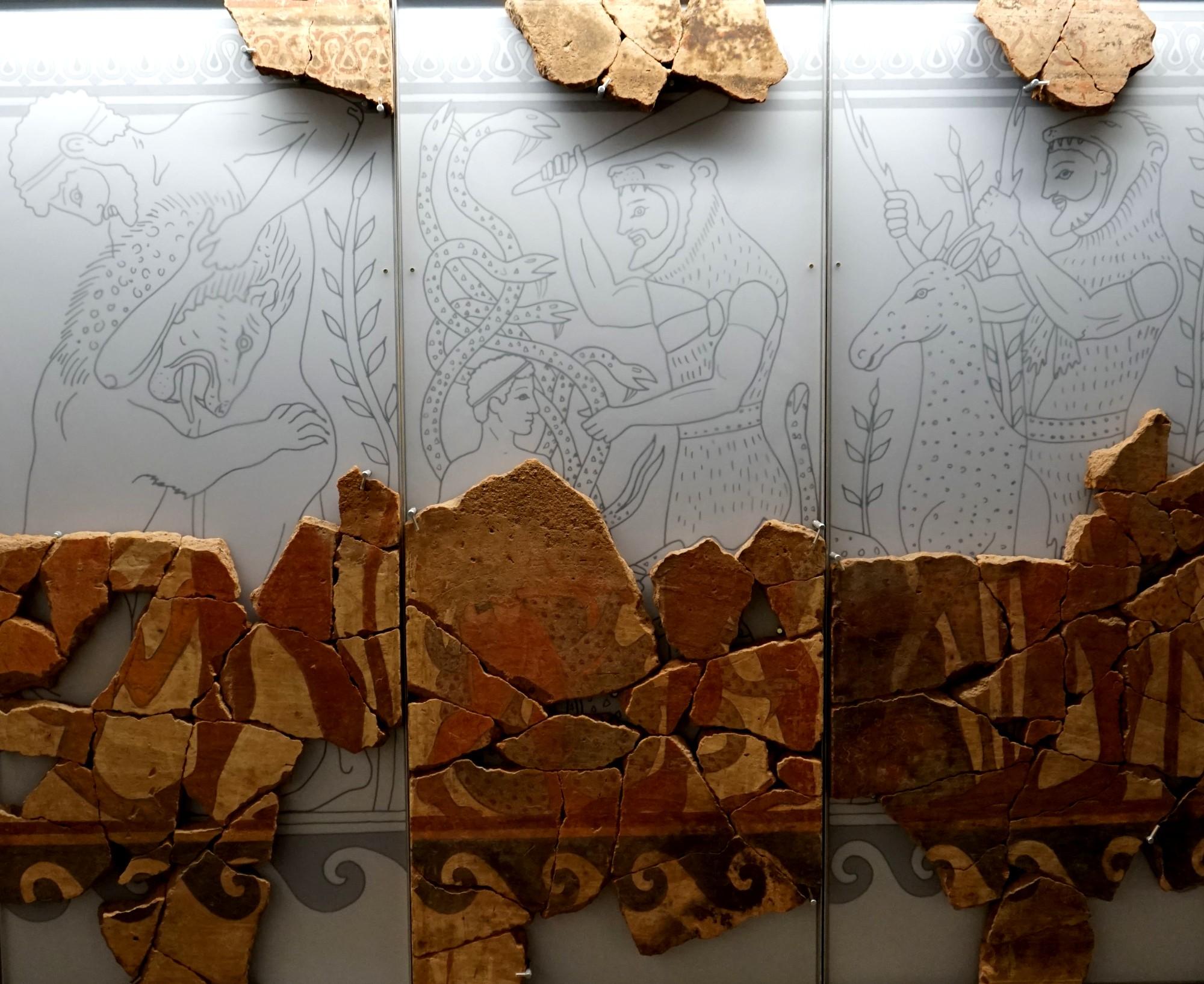 Fresco of the labors of Hercules, late 6th to early 5th century BC.

A number of themes are explored in the exhibition. Etruscan myths are represented by nine large panels showing the exploits of Hercules, who was a major cult figure across the ancient Mediterranean. Damaged to the point that approximately only the bottom third of each panel remains, the hero is nevertheless identifiable by the labors he is performing, such as wrestling the Nemean lion or battling the many-headed hydra.

Scenes painted on other terracotta panels reveal Etruscan aristocratic interests in dance and athletics, while helmeted figures brandishing weapons emphasize the centrality of warfare in ancient life. This showcasing of Etruscan culture is supplemented by other objects, including bronze armor, statues, and a varied display of exceptional ceramic vessels, some of which were imported to Etruscan communities in Italy from workshops in Greece. 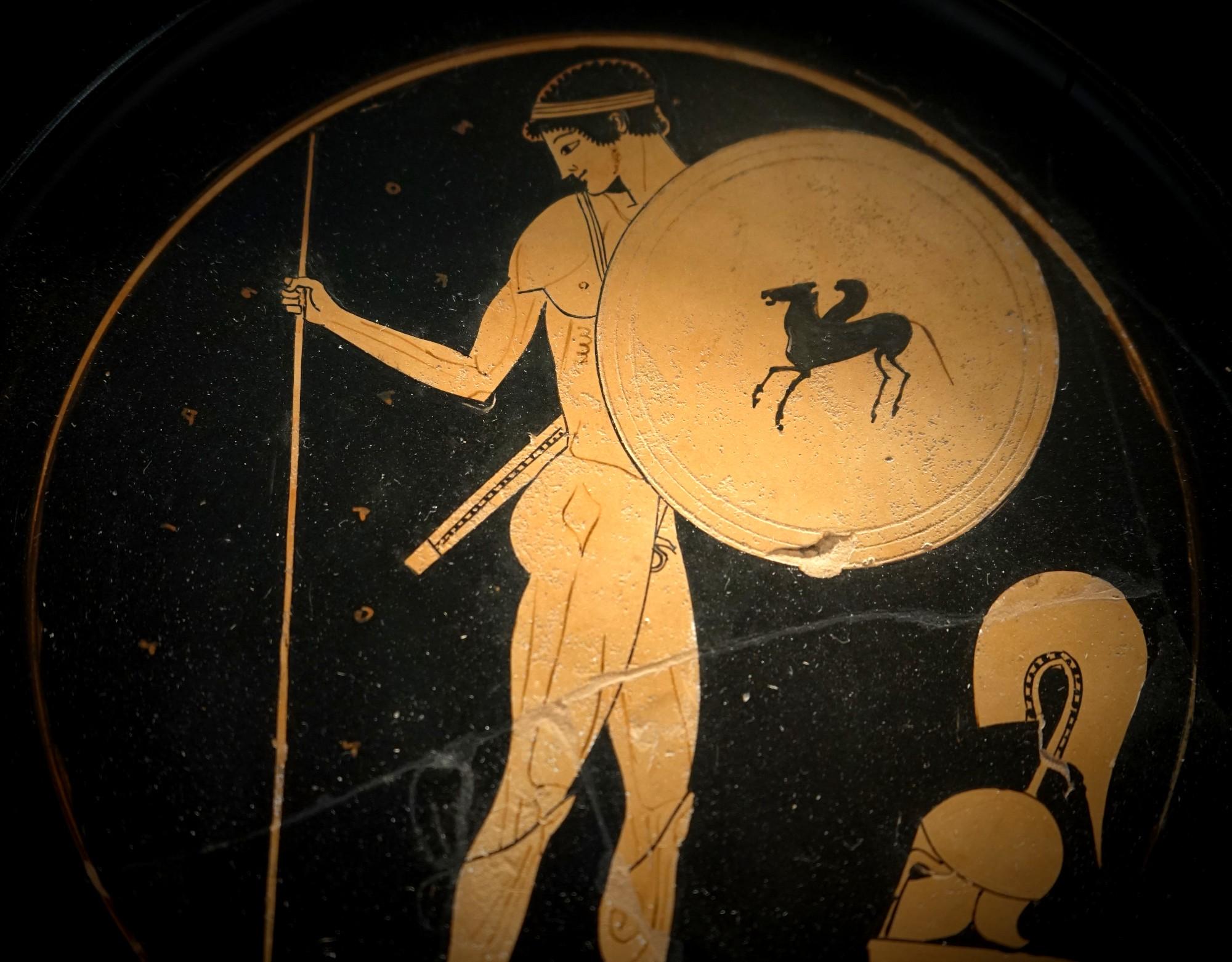 In addition to the wall paintings, the exhibition includes a number of architectural terracotta plaques that were nailed to the roofs of important public buildings, serving both to protect and to decorate the wooden structures. On display is the pediment of a temple the Etruscan city of Caere, the plaques of which are painted with geometric patterns, images of animals, and a frieze of armed horse-riders and charioteers.

The standout piece of architectural sculpture is a superb, life-sized group in terracotta, which once stood at the apex of a temple pediment and dates from the third century BC. Preserved are the lower half of a figure wearing a short tunic and hunting boots, and another partially preserved naked man kneeling on a rock while being attacked by two dogs, one graphically biting into his thigh. The scene very likely illustrates the myth of Actaeon, who while hunting came across the goddess Diana bathing. As punishment, Diana turned Actaeon into a stag who was then set upon by his own hounds–an early instance of the hunter quite literally becoming the hunted. 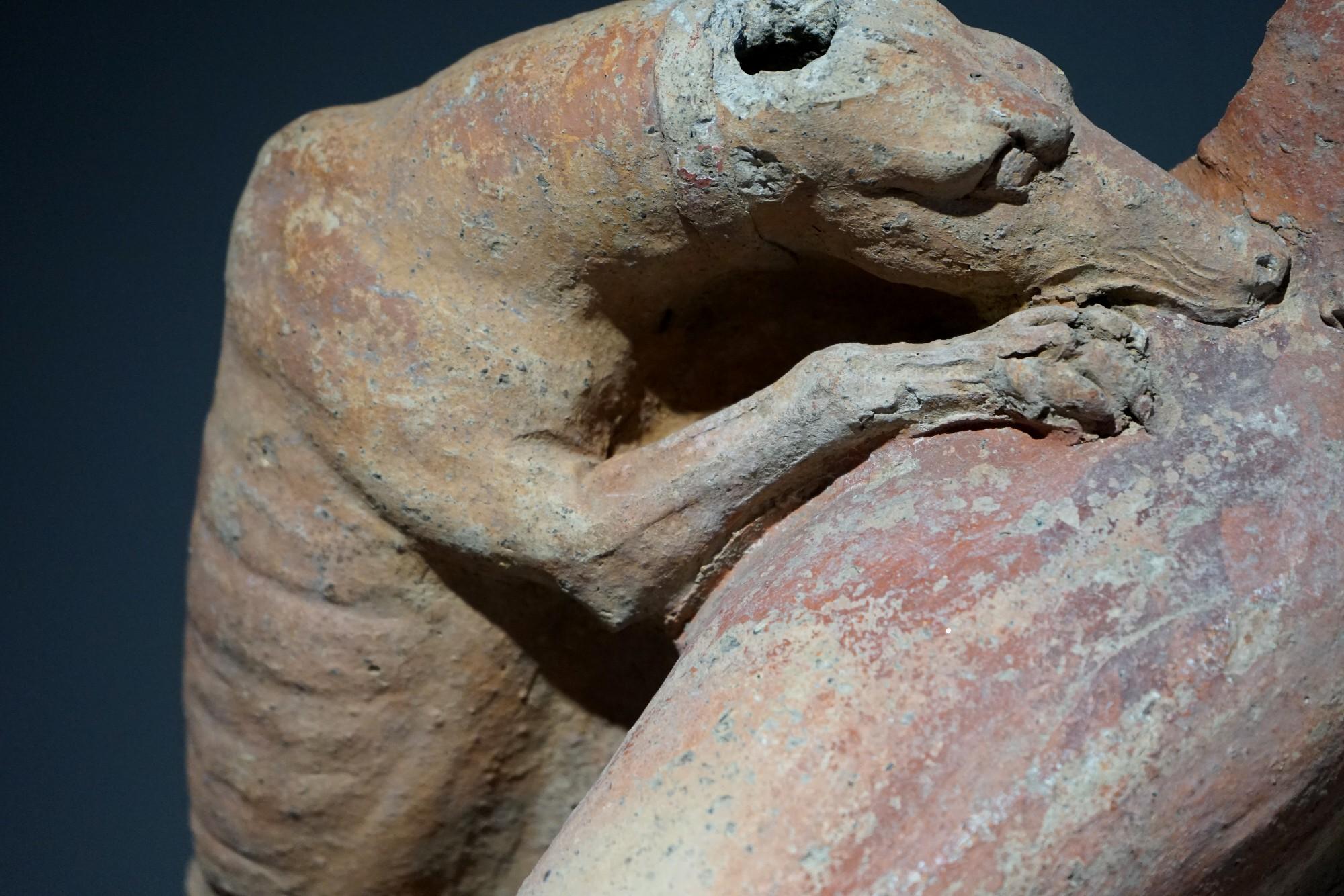 Yet this is not simply an exhibition about Etruscan art as a subject in itself. It is comprised of pieces that were illegally excavated and have subsequently been recovered or repatriated, some now on public display in Italy for the first time.

Many of the fresco paintings were seized from a warehouse in Geneva in 2016 as part of a major operation, featured in the international press, by the Comando Carabinari Tutela Patrimonio Culturale–Italy’s police force responsible for the protection of cultural heritage. The looting of ancient sites and Etruscan artifacts is not a new phenomenon; fueled by soaring prices in the antiquities market, the 1950s to 1980s saw a dramatic increase in illegal digging, which caused irreparable damage to Etruscan archaeological settlements.

Wall paintings, vases, statues, and weapons were smuggled out of Italy and sold to private collectors as well as museums in Europe and the United States. A number of pieces on display in the exhibition, including the painted terracotta plaques of the temple pediment from Caere, have been returned by certain museums, most notably the Ny Carlsberg Glyptotek Museum in Copenhagen, as the result of a recent agreement signed with the Italian Ministry of Cultural Heritage and Activities and Tourism. 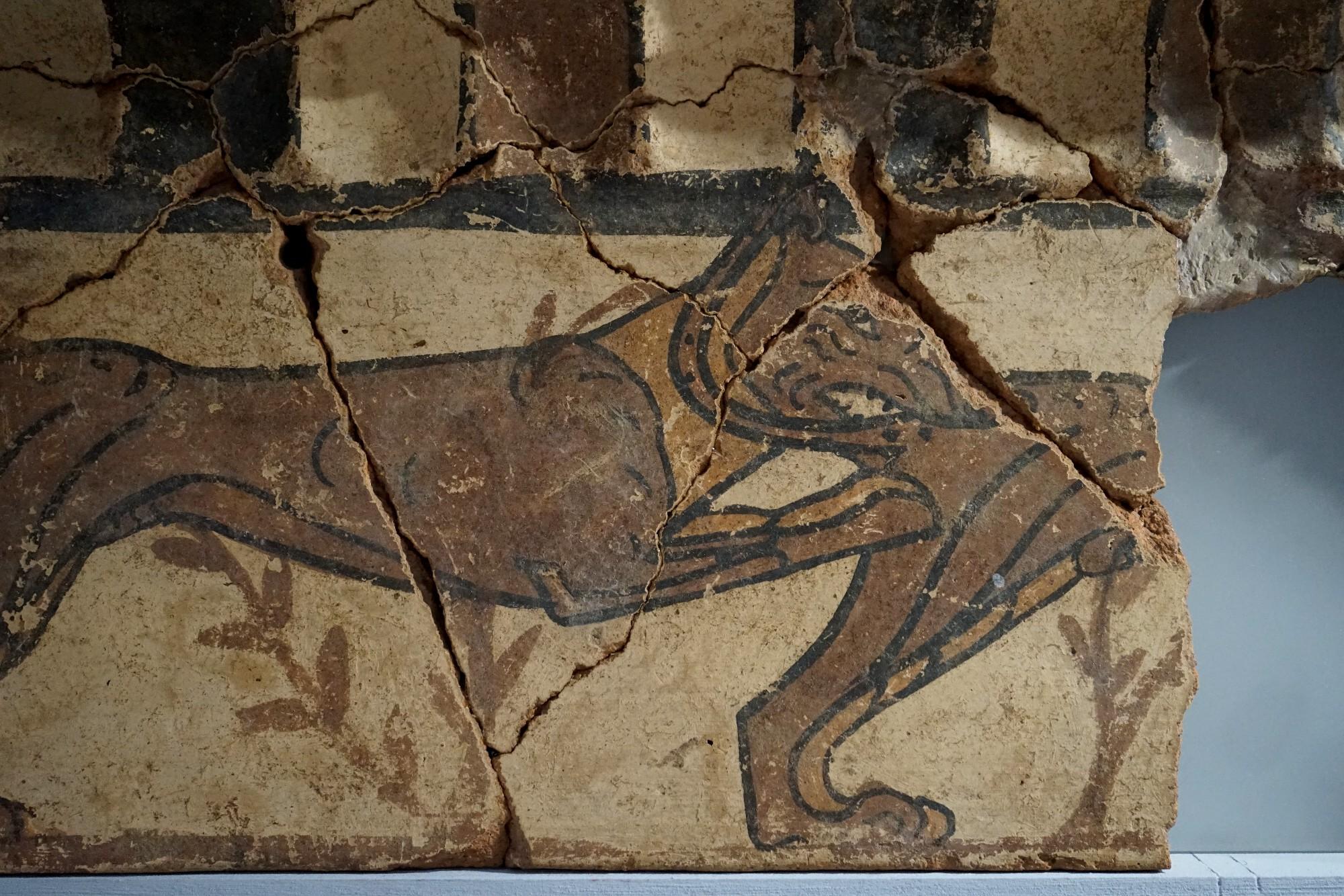 The looting of archaeological sites remains a serious problem. The methods used for extracting objects are highly destructive and what is not deemed saleable is often damaged. By tearing artifacts out of the ground rather than scientifically excavating and recording them, crucial information about the context in which they were found is lost. And it is this contextual information that provides the most valuable clues to reconstructing the past and understanding the relevance of particular artifacts to those societies.

Because of the secrecy surrounding the illegal acquisition of antiquities, it can become impossible to know from which site a particular fresco came, let alone the specific building it once adorned; yet knowing if certain scenes decorated a temple, house, or tomb makes a big difference to understanding what the images meant to those people. This exhibition shows how recovering and publically displaying such objects allows and promotes the dissemination of new research and provides an opportunity for them to be seen by all.