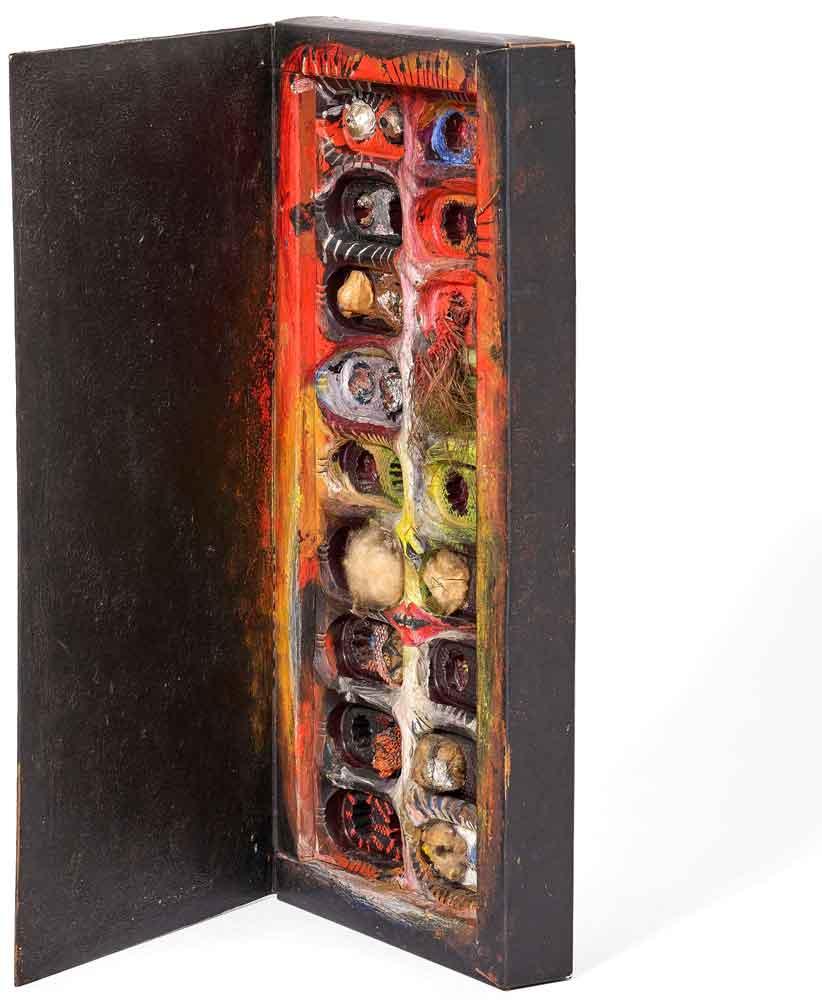 “In both her artistic and literary oeuvre, it is impossible to separate biography from her ‘work.’”

Much of Erna Rosenstein’s Surrealist artwork has the character of children’s book illustrations—enchanting, vibrant, with a feathery application—but that’s only part of it. In one painting, a small train chugs across a bleak landscape, its chimney piping a trail of smoke. Where puffy cumulus clouds should float above the horizon, there are—inexplicably—two smiling, disembodied faces. The surrealism of Rosenstein’s work comes from the way something so bewitching can also be nightmarish, bodily, ironic, and enigmatic.

Alison Gingeras, who curated Erna Rosenstein: Once Upon a Time at Hauser & Wirth (the first-ever monographic exhibition of Rosenstein’s work outside of Poland), explains that this quality of Rosenstein’s work, in many ways, embodies the way narrative and, specifically, fairy tales become coping mechanisms for trauma. Gingeras writes in the exhibition catalogue, “In both her artistic and literary oeuvre, it is impossible to separate biography from her ‘work.’” For Rosenstein, who was a Holocaust survivor, “[her] life is her medium.” 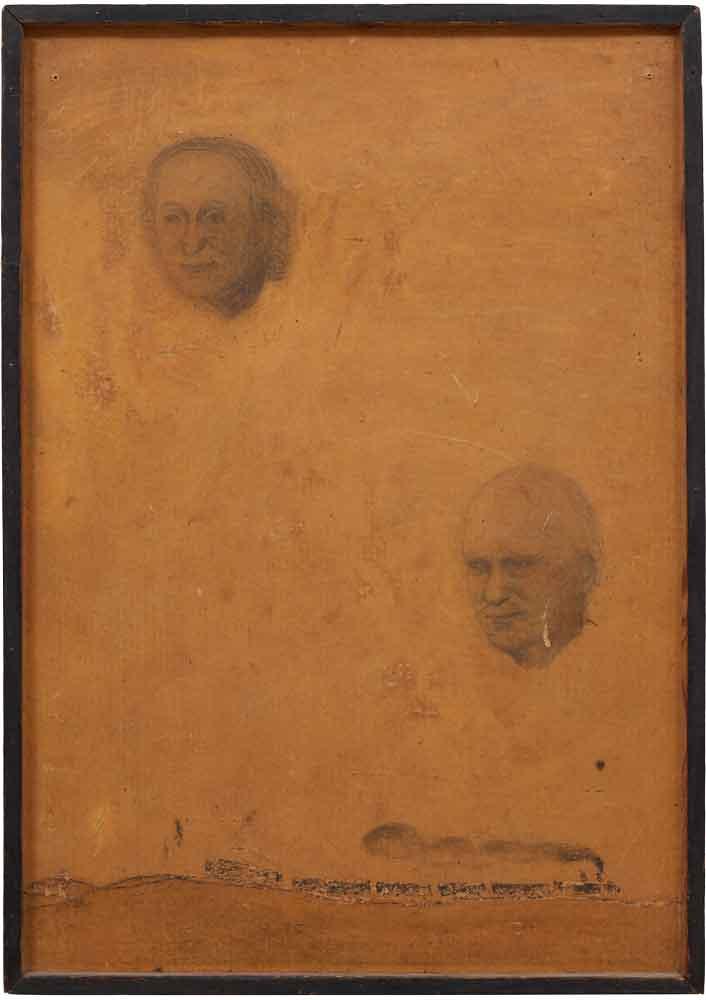 Erna Rosenstein was born in 1913 in Poland to a well-off, cultivated family. Her father was a lawyer and a judge and her mother was a cultured homemaker, firmly entrenching them in the liberal Polish-Jewish bourgeoisie. Rosenstein’s creative talents were apparent from a young age, though her parents discouraged her more radical ambitions. She was a Communist activist and pursued her artistic inclinations through association with the Kraków Group.

The Kraków Group was united politically with the left, yet artistically diverse—they culled inspiration from a range of movements, including Expressionism and Cubism. As for Rosenstein, her work was always imbued with a spirit of individuality and complexity; she worked in painting, drawing, and sculptural assemblage and was an active poet and writer. She traveled to Paris before the outbreak of World War II, where she found inspiration in the Exposition Internationale du Surréalisme (International Surrealist Exhibition), as well as to Munich, where she saw Entartete Kunst, Hitler’s Degenerate Art Exhibition.

As Gingeras explains, Rosenstein’s life, career, and ideological beliefs are inextricably intertwined with the political upheaval and trauma of the twentieth century. In 1939, when the Nazis invaded Poland, Rosenstein’s family returned to Lwów, where Rosenstein continued to support her artistic and political comrades, participating in anti-Fascist action. In 1941, Nazis took hold of the city and set up Jewish ghettos. By 1942, Rosenstein’s family had escaped to Warsaw, hoping to journey further to a countryside village. Horrifically, during their attempted escape, a man claiming to assist them brutally murdered Rosenstein’s parents and another woman who had been traveling with them. Erna Rosenstein narrowly evaded a similar demise—but not before witnessing the traumatic event. 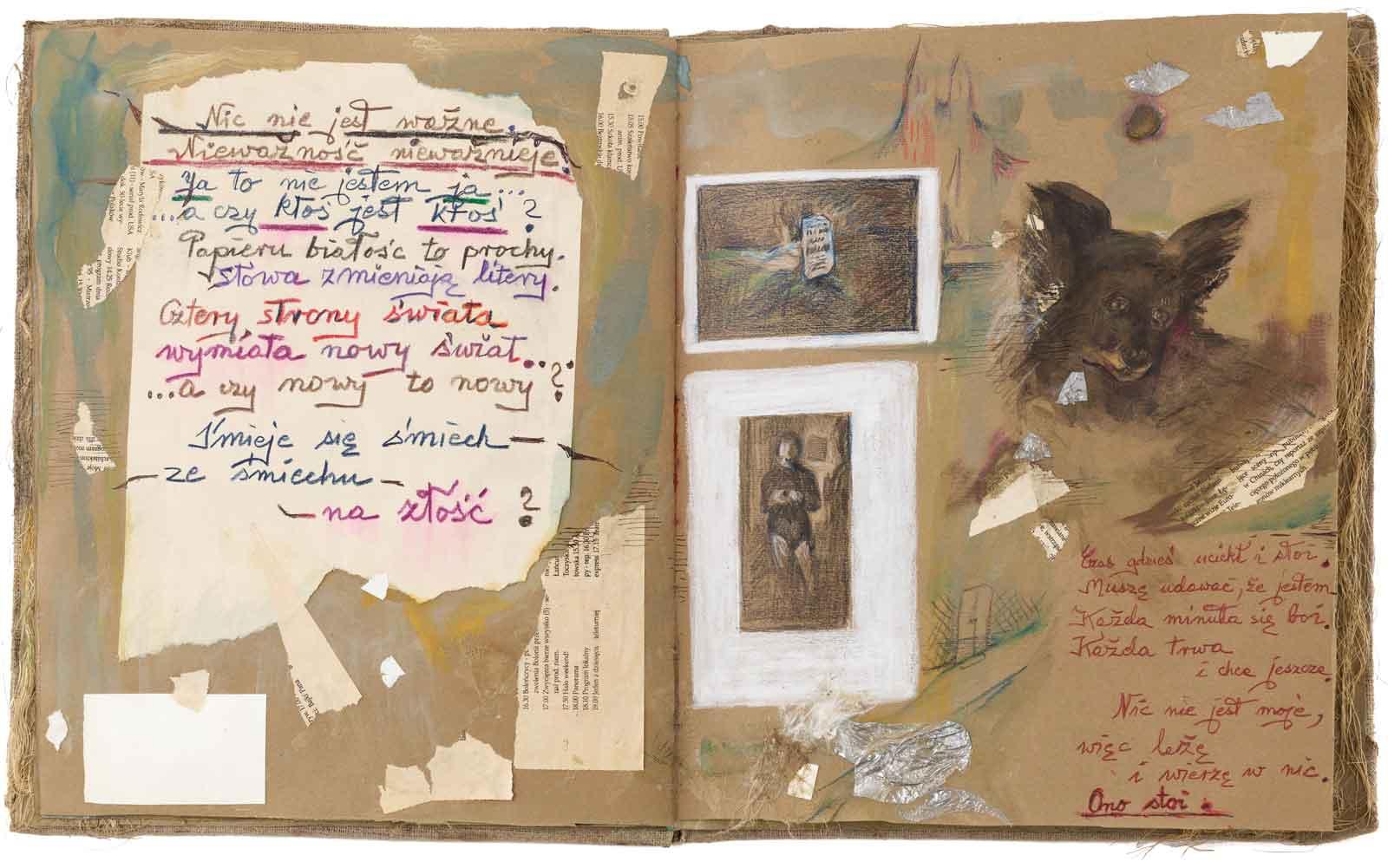 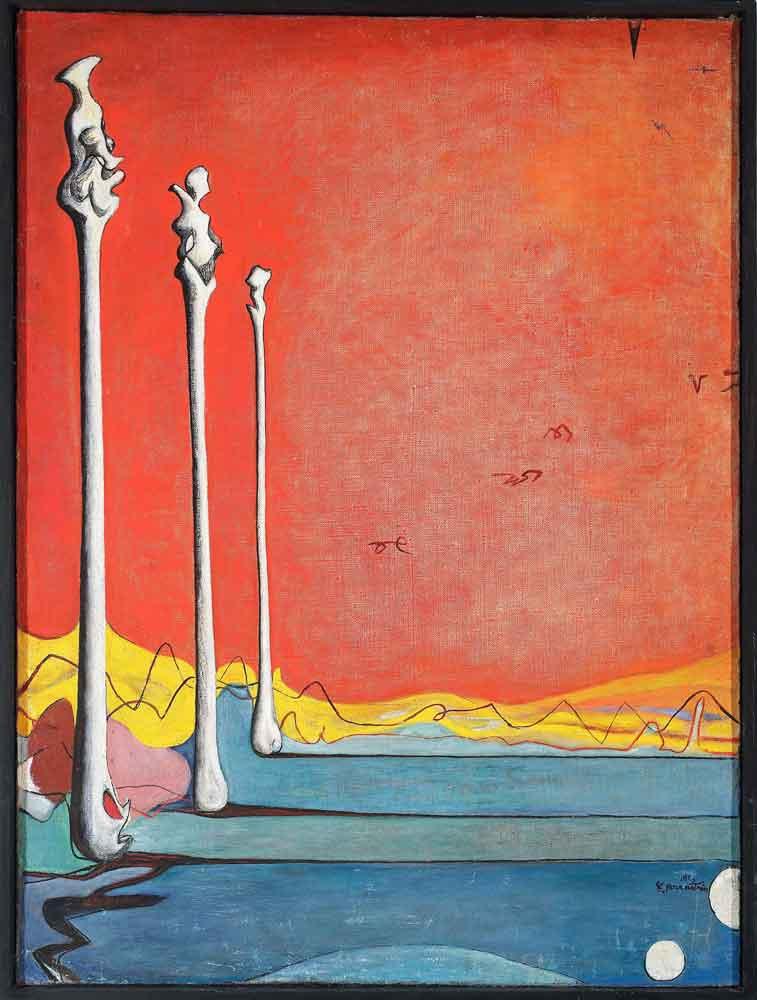 Rosenstein survived the war and, after living in Paris for a few years, returned to Poland. She married an influential intellectual, Artur Sandauer, and resumed her political and artistic pursuits. It is worth noting that Rosenstein was unusual in her insistence in returning to and staying in Poland, it was a choice many survivors did not make. She later reflected, “I don’t know if I could say that it is my credo that ‘one should stay here despite everything,’ I don’t know if credo is the right word. But that’s what I felt. That’s how I felt.” She continued working, insisting that she wrote “because of emotions, feelings.”

These emotionally motivated works included children’s books (such as a sweet story called the Tiny Tale of the Snail and His Friends), handmade books, and reimagined, found objects that recall works by Meret Oppenheim and Marcel Duchamp. Within her literary and artistic oeuvre is an overwhelming sense of what Gingeras terms “beguilement.” When Gingeras first stumbled upon Rosenstein’s work at a bookstore in Warsaw, she recalls, “I was just completely enchanted.” Before she even read anything about Rosenstein, “Beguilement was something that I felt viscerally. I was under a spell, and I think that’s what her work does.” 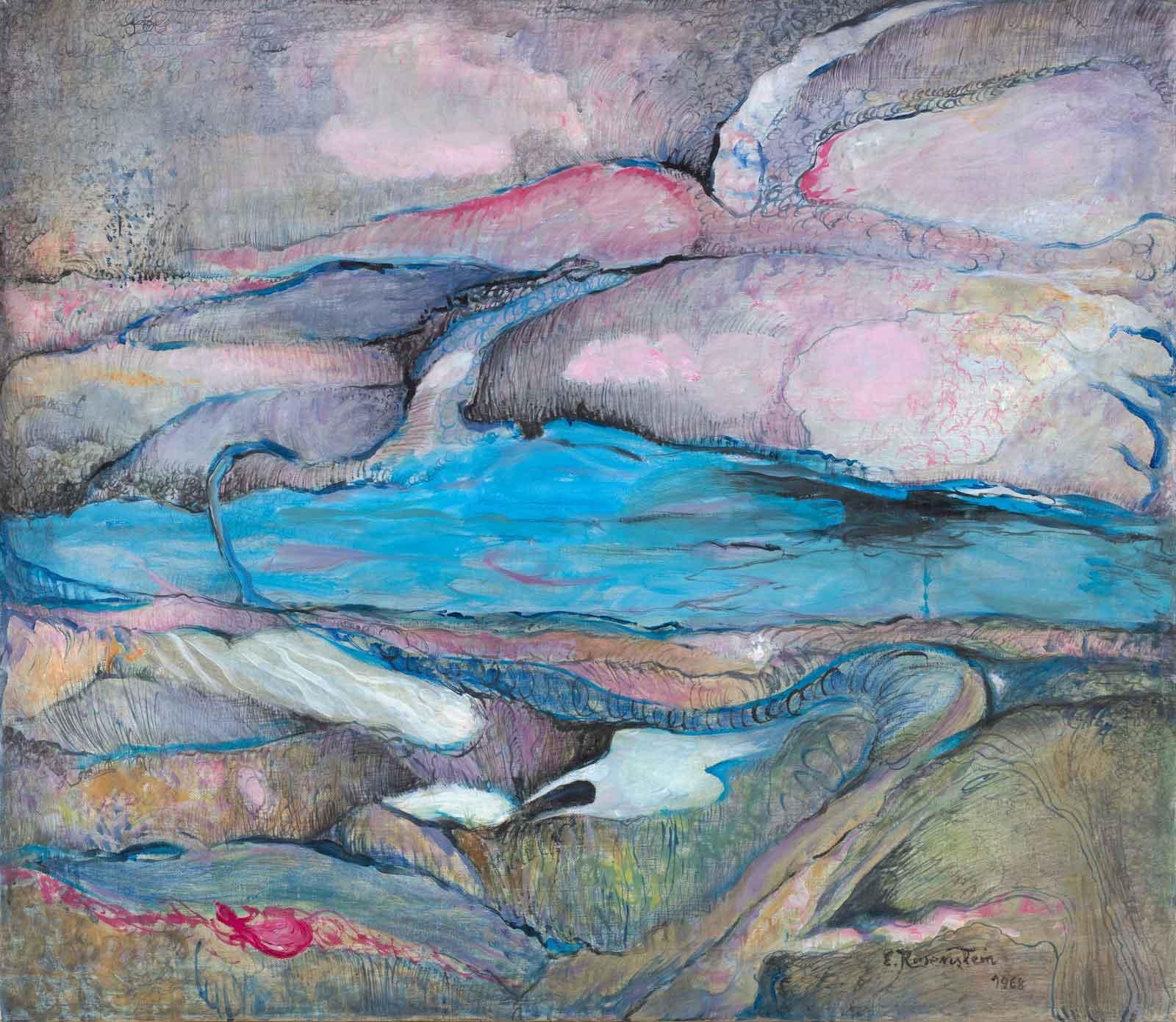 To understand some of this inherent magic, Gingeras turned to theory by Bruno Bettelheim, a child psychologist who wrote about the relationship between trauma and fairy-tale narratives. Rosenstein processed her experience through writing fables and painting her philosophical, slightly fantastical works. She repeatedly depicted the same subjects, rendering her parents’ faces with almost-photographic detail. Rather than portraying the events realistically, Gingeras suggests that Rosenstein instead “transforms this primal scene into disconcerting, often magically tinged dreamscapes.”

Of course, there is a certain difficulty in describing the relationship between trauma and art; in writing about Rosenstein, Gingeras had to navigate around a whole arsenal of tropes relating to Rosenstein’s identity. In the catalogue and the exhibition, Gingeras carefully skirts the myth of the sui generis artist—the artist plucked from obscurity with a defined practice and style. Beyond that, Gingeras insists, “I was very careful to say in my essay that she would not embrace the label of feminism.” Like other artists in the period that prioritized communism over feminism, “she had a quite humanist approach. Her work was about addressing the perseverance of the human spirit.”

The perseverance of the human spirit comes up against the inadequacy of memorialization. During our interview, Gingeras adds, “I think a lot of her work, even the poetry, is really about the impossibility of memorial in monuments, but the centrality of memory. The landscape trope is a perfect vehicle for dealing with that.” Rosenstein’s biomorphic, slightly alchemical landscapes are illustrative and colorful and full of wonder, like a fairy tale. But landscapes can also conceal, as they grow over and evolve beyond the unthinkable horrors that took place there. Rosenstein questions the silences and invisibilities of landscapes, as much as what she actually depicts.

In describing the 1985 Holocaust documentary, Shoah, critic Richard Brody wrote that the film “bears witness to the bearing of witness.” Something similar happens in Rosenstein’s work from the postwar period. She processes her own remembrances by both reciting moments that were intensely personal to her and portraying them from a controlled, self-motivated distance. Her work is testimony. As both eyewitness and artist, her work, as Gingeras notes, corrects “the discrepancy left between the official monument, human memory, and the march of time.”