The Art of the Caricature: People on Paper

Celebrating the art of the caricature 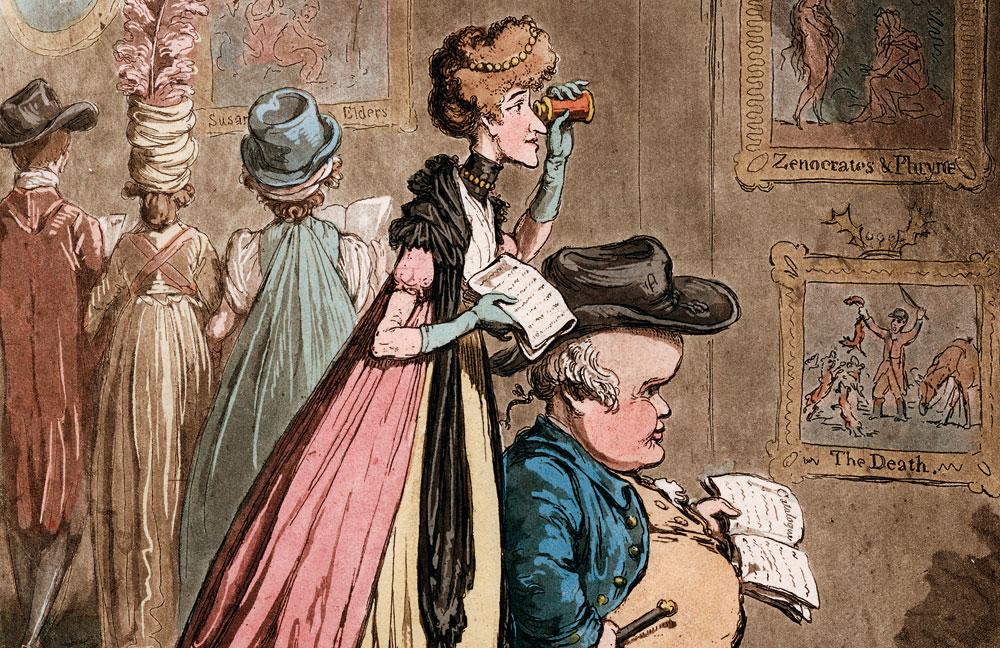 James Gillray’s A Peep at Christie’s;-or-Tally-ho, & his Nimeney-pimmeney taking the Morning Lounge portrays the 12th Earl of Derby and his alleged mistress. Etching and aquatint with hand-coloring on wove paper. Published September 24, 1796, by H. Humphrey.

In early spring of 1786, Joseph Gulston, a connoisseur and erstwhile politician, sold off one of the great print collections of eighteenth-century Britain. Two decades earlier, at the age of twenty-two or twenty-three, Gulston had inherited a fortune worth more than £250,000. Over the course of the late 1760s to the late 1770s, he acquired tens of thousands of prints, including works by Rembrandt, Dürer, and William Hogarth, as well as twenty-six volumes of caricatures. His collection became the envy of the legendary bibliophile and art collector Horace Walpole, who, in a November 1772 letter, bemoaned his losses—self-inflicted, he confessed—after a visit from the acquisitive Gulston: “[H]e breakfasted here today, and on a very slight offer of accommodating him with such prints or heads as he had not, he absolutely has taken 187 of my favourite and most valuable heads…I must do him justice to say that I really did offer him…to take as such as he has not, but this I thought would not have exceeded a dozen or thereabouts. He has absolutely gutted and garbled my collection of all my choice old heads.”

Eventually, Gulston’s purchases of prints and books led him into debt. Additionally, he and his wife, Elizabeth Bridgetta Gulston, an artist, poet, and amateur astronomer, had paid lavish sums transforming their residence, Ealing Grove, into an Italian-style villa. By the late 1770s, the couple had spent beyond their means. In 1780 Elizabeth passed away at the age of thirty from an illness; Gulston died in ill health in July 1786, a few months after his collection had been auctioned off. Into the 19th century, though, Gulston’s legacy as one of the great collectors of Old Master prints and caricatures lived on. 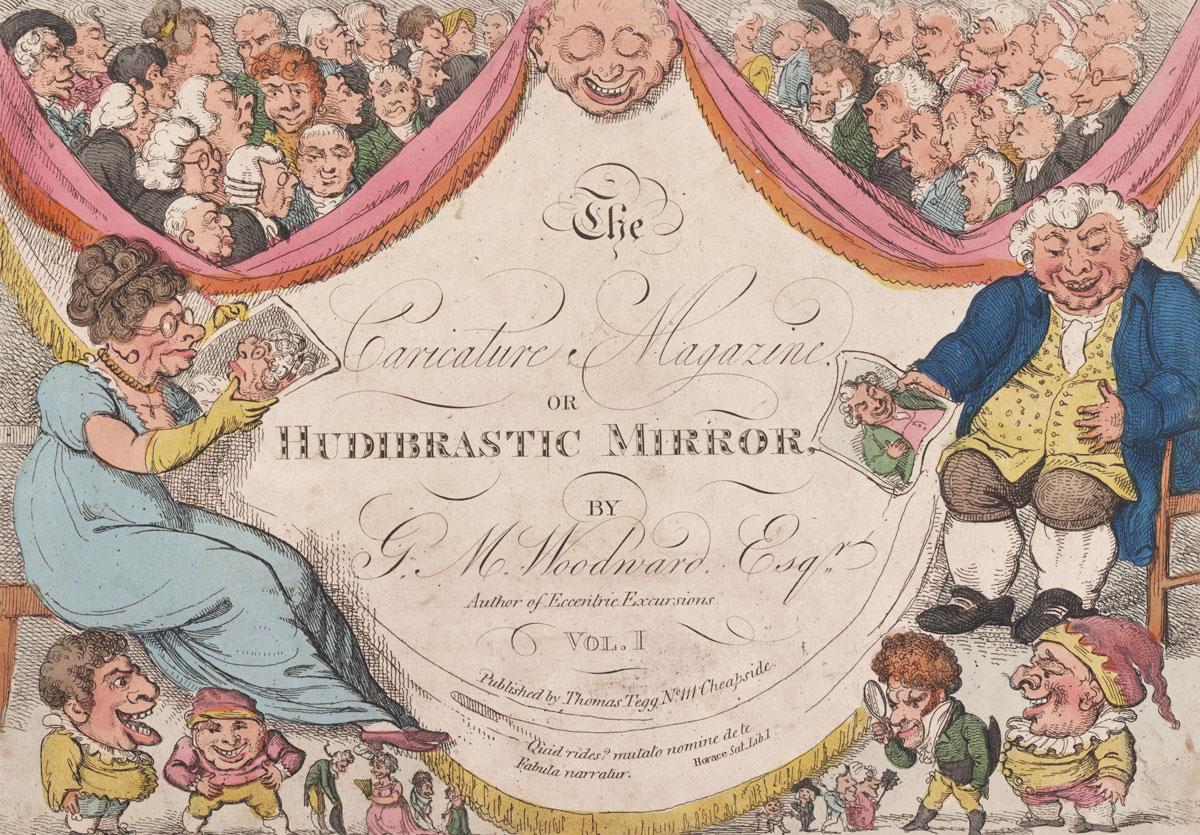 The title page for the subversive Caricature Magazine or Hudibrastic Mirror by printmaker Isaac Cruikshank after G. M. Woodward. Etching with hand-coloring on wove paper, published by Thomas Tegg, London, circa 1808.

Among the many works on paper held by Yale University’s Lewis Walpole Library is a 1772 etching by Elizabeth Bridgetta Gulston titled A Character, which ridicules the social pretensions of a badly dressed courtier. In the lines of verse she inscribed below the image, Gulston wittily remarks, “Whene’er at Court he shews his Face/The Breeding Ladies Quit the Place.” Gulston’s print highlights the late Georgian fascination for observing, drawing, and collecting “characters.” Men and women of rank—like Gulston, a baronet’s daughter—as well as “middling” and lower-class British citizens reveled in the everyday spectacle of “characters” and “caricatures.” The terms were often used interchangeably in the period.

The Lewis Walpole Library, located in Farmington, Connecticut, about forty miles north of New Haven, features an extensive collection of eighteenth- and early nineteenth-century prints, drawings, paintings, rare books, and manuscripts; many of the library’s holdings originally belonged to Horace Walpole—he is the Walpole honored in the library’s name, while the Lewis part originates with twentieth-century donors Wilmarth Sheldon Lewis and Annie Burr Lewis. Like Joseph Gulston, Walpole was an avid collector of caricatures by the amateur artist Henry William Bunbury (Walpole praises Bunbury in his Anecdotes of Painting in England as a “second Hogarth”).

The exhibition Character Mongers, or, Trading in People on Paper in the Long 18th Century, at the Lewis Walpole Library from October 10, 2016, to January 27, 2017, highlighted these great works. 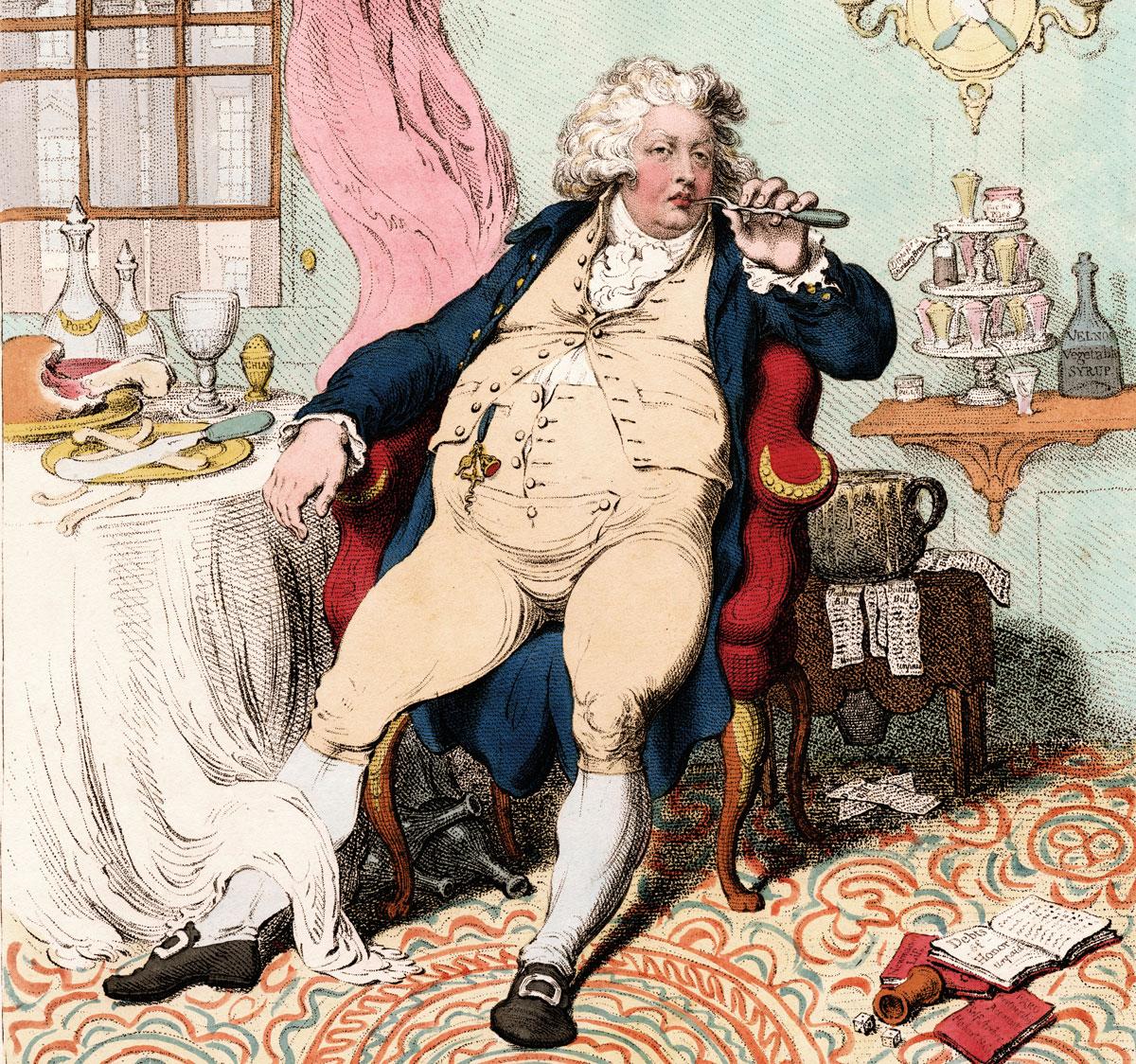 James Gillray, the leading caricaturist of his time and so-called “father of the political cartoon,” produced A Voluptuary under the Horrors of Digestion, a stipple engraving with etching and hand-coloring that pictures the Prince of Wales, later King George IV. Published July 2, 1792, by H. Humphrey.

The title of the exhibition was inspired by the appellation “character-monger” the author Samuel Johnson fondly used to describe the novelist and diarist Frances Burney. The phrase, “character mongers,” aptly captures the comic sensibilities of many eighteenth-century men and women. The upper class swapped literary characters and drew caricatures; they also purchased and traded satirical prints. The less wealthy could gather in front of print shop windows and gaze at political and social prints by the great artists of the “golden age of caricature”—the aforementioned Bunbury, James Gillray, Thomas Rowlandson, G. M. Woodward, among others. 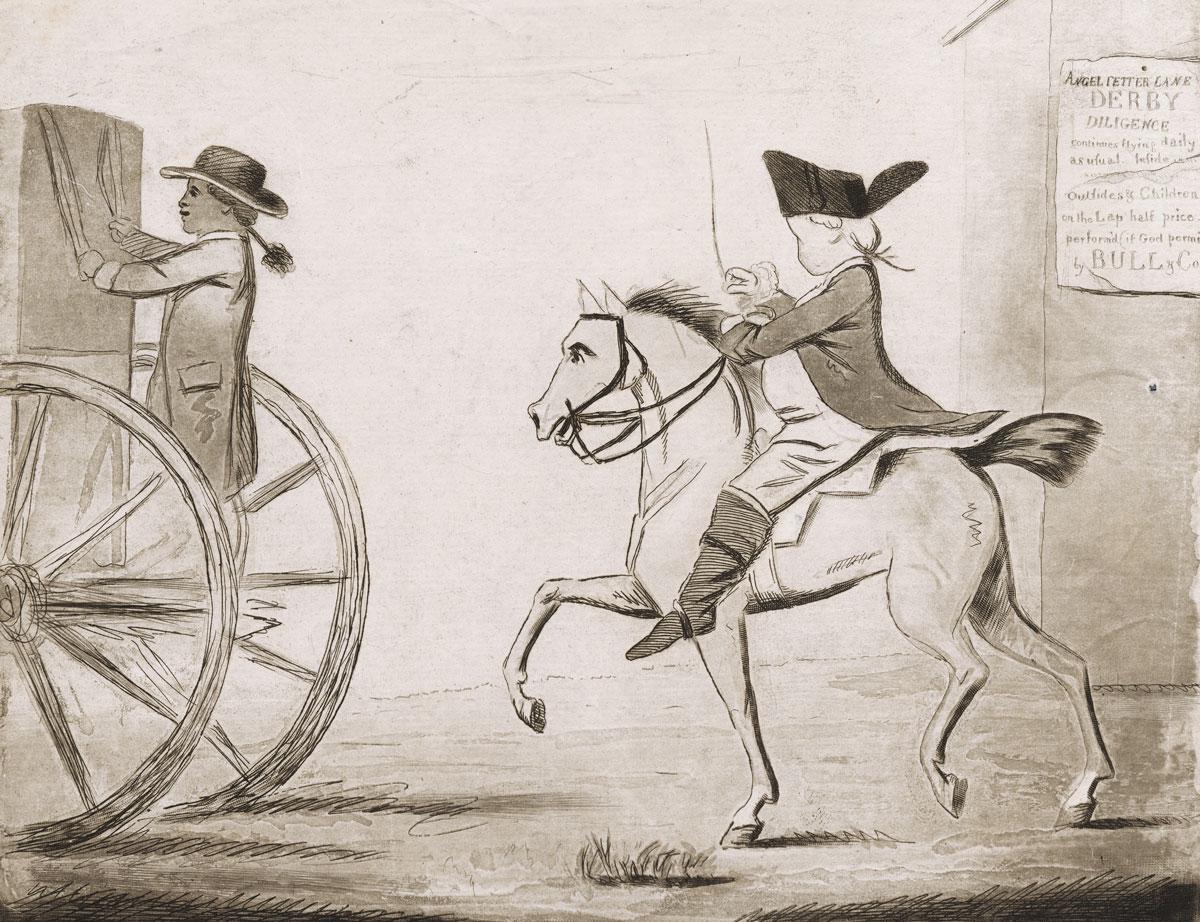 The exhibit included iconic images like Gillray’s 1792 satire of the corpulent, spendthrift Prince of Wales, A Voluptuary under the Horrors of Digestion, and lesser-known works like Woodward’s design for publisher Thomas Tegg’s Caricature Magazine. A highlight of the exhibit was the pairing of Bunbury’s 1781 burlesque Lord Derby Following Miss Farren and Gillray’s 1796 caricature A Peep at Christie’s. Both images mock the stubby Edward Smith-Stanley, 12th Earl of Derby, and his passion for the tall, winsome actress Elizabeth Farren. The couple eventually married in 1797, the year after Gillray’s print appeared, and less than two months after the death of the earl’s first wife, Elizabeth Smith-Stanley. In A Peep at Christie’s, Lord Derby and Farren are portrayed as art collectors, but their scandalous affair is the real object on view. (Farren always maintained that before the marriage her eighteen-year relationship with Derby had been strictly platonic.)

The images of Lord Derby and Farren, like so many of the humorous prints produced in late eighteenth- and early nineteenth-century Britain, captivated the acquisitive eyes of young and old, high and low, and inspired a burgeoning nation of character collectors. Moreover, the popularity of these caricatures paved the way for the success of authors like Charles Dickens whose fiction relied on illustration of this kind.

Leigh-Michil George is a scholar of eighteenth-century British literature and visual culture. She teaches in the English Department at Pasadena City College.