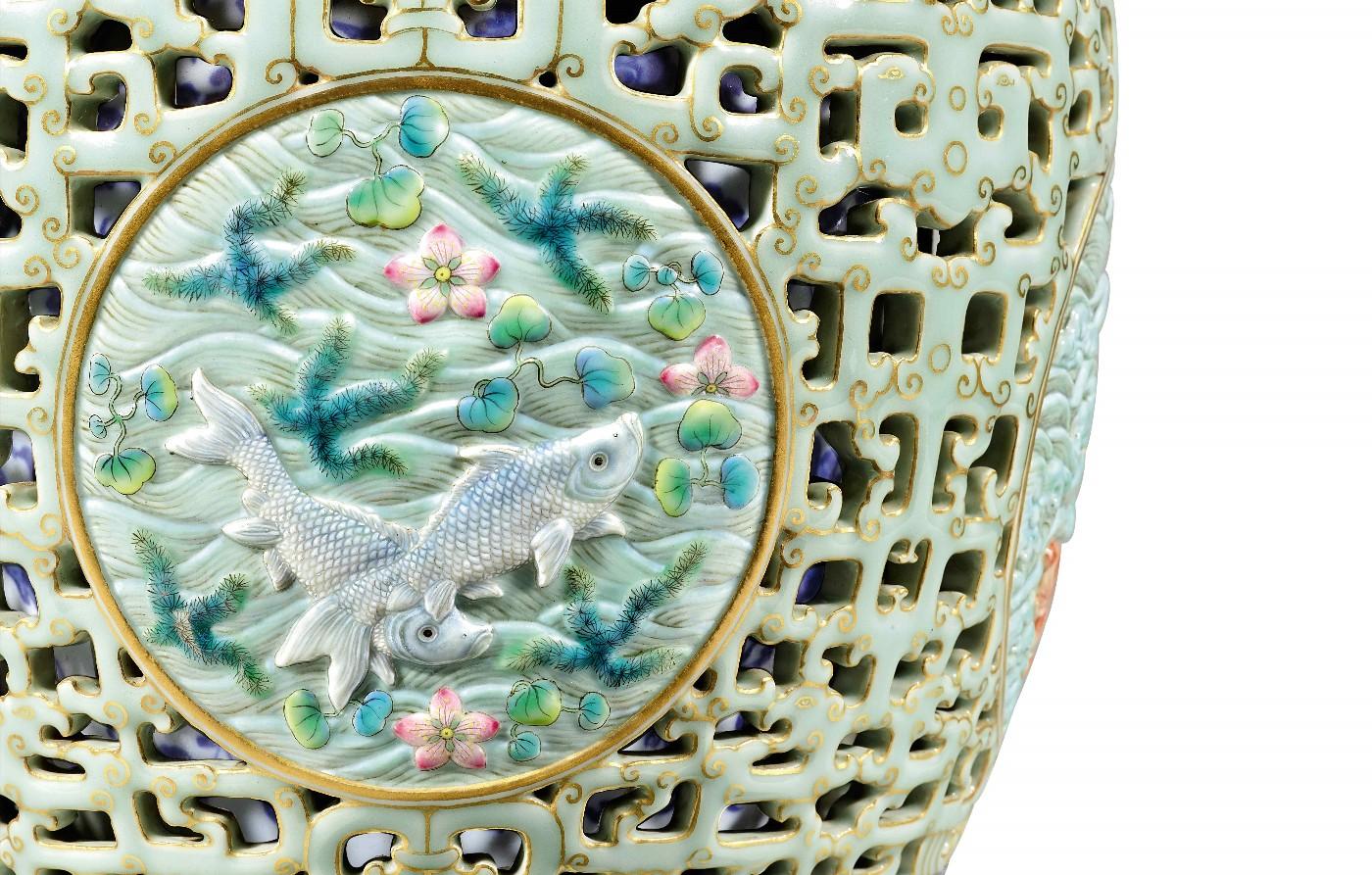 Opening this season’s Sotheby’s Hong Kong Chinese Works of Art Autumn Sale Series 2018 on 3 October is The Yamanaka Reticulated Vase which has remained dormant in a Private Japanese Collection for almost a century since its acquisition in 1924 following its exhibition with Yamanaka in New York in 1905. Carved and exquisitely painted with four pairs of fish below Rococo-inspired motifs on a yellow sgraffiato ground, the exceptional famille-rose reticulated vase is skillfully modeled with an inner blue-and-white vase. Ranking among the most complex porcelains ever commissioned by the Qianlong Emperor, it is the pair to the famous Bainbridge Vase hammered at £43 million in 2010. 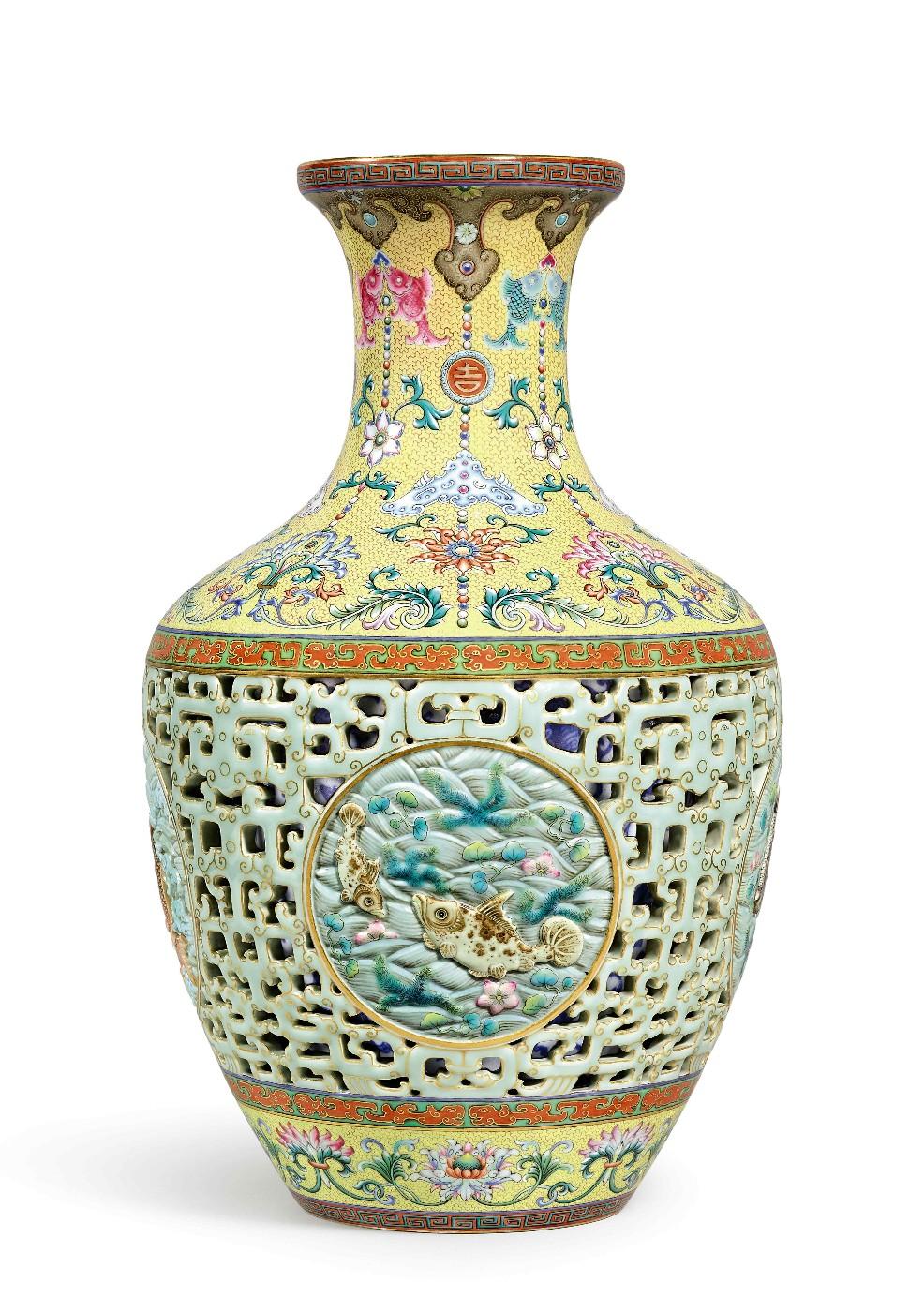 Nicolas Chow, Chairman, Sotheby’s Asia, International Head and Chairman, Chinese Works of Art, comments, “It is a great privilege for us to offer this Qing reticulated vase from the Imperial collection of the Qianlong Emperor this season. Not only is the vase unique and elaborate in design, it is also in pristine condition. To think, the distance the singularly fragile vase has traveled, and the tumultuous times it has survived, for it to be standing here in front of us today without so much as a crack or a chip, is truly extraordinary.”

This porcelain masterpiece is not only a reflection of the exacting standards on technical proficiency and the insatiable demand for stylistic novelty at the court of the Qianlong Emperor (r. 1736-1795); but an aesthetic representation of the cultural confluence of East and West at its pinnacle in Chinese history.

Prominently featuring an openwork design composed of highly stylised archaistic dragons, borrowed from archaic ritual bronzes of the Zhou dynasty (c. 1046 – 256 BC), the vase’s openwork-side and double-wall design can be traced back all the way to the official (guan) kilns of the Southern Song Dynasty (c.1127-1279) at Laohudong (Tiger Cave Kiln) in Hangzhou, where excavated shards correspond with the original prototypical model of such a design. Extant examples can still be traced back to the Yuan Dynasty (c.1271–1368) at the Longquan kilns in Zhejiang. The present design with its pale green glaze clearly echoes these prototypes and the style is in fact expressly referred to as ‘Longquan’ in the Qing imperial records, where an entry for 1743 documents a pair of yangcai yellow-ground reticulated vases with ‘Longquan openwork design’, for which stands were to be made. When peering through the reticulated outer shell of the vase, the Emperor could see inside a blue-and-white vase with composite flower scrolls, of a type that recalls the exquisite Yongle porcelains of the early Ming dynasty made at Jingdezhen, Jiangxi province. 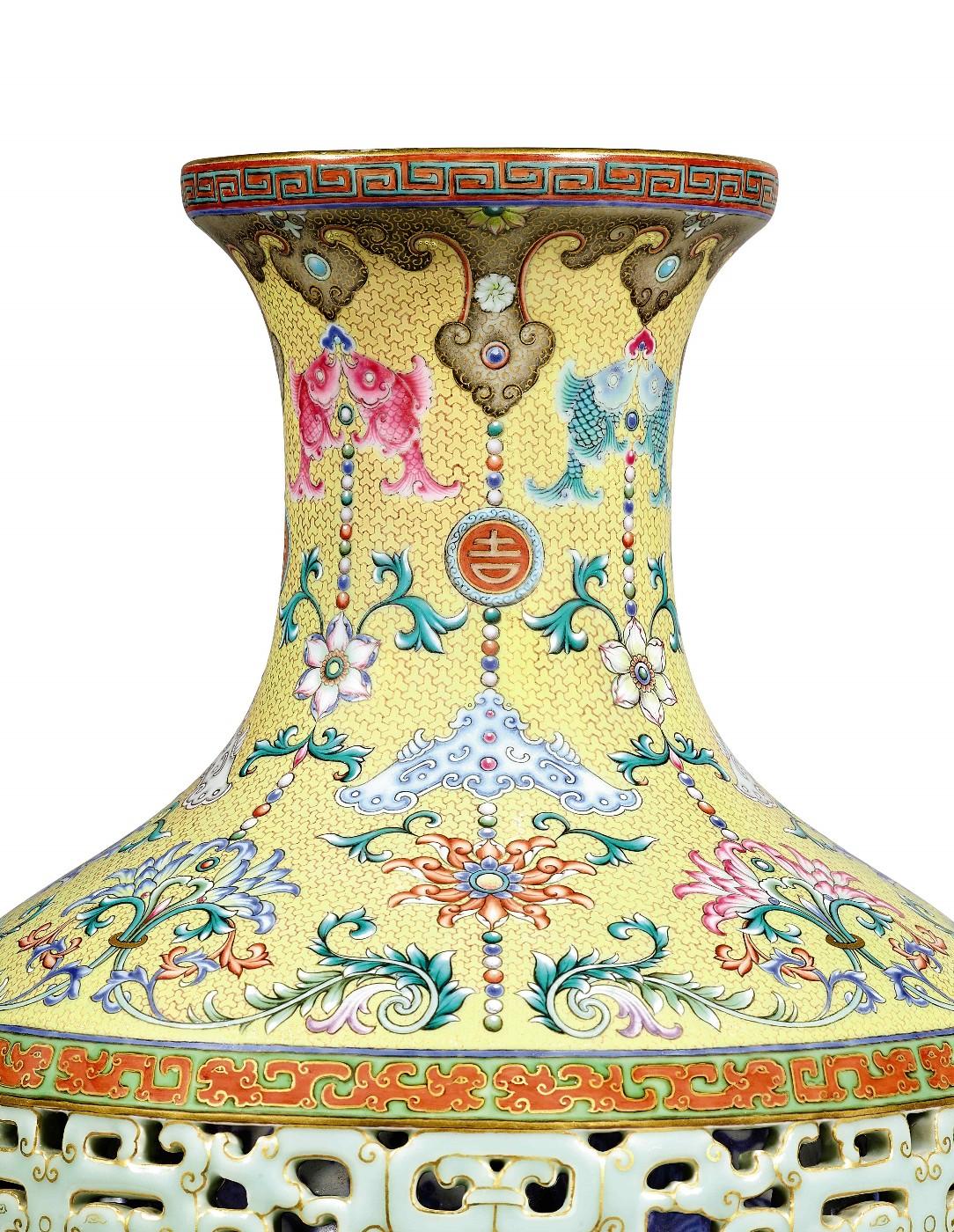 Reticulated yangcai vases with double walls represent one of the last great innovations introduced by Tang Ying (1682-1756), the kilns’ creative supervisor, for the Qianlong Emperor. The period they were conceived in the early 1740s saw the production of some of the most exquisite porcelains at the imperial ateliers inside the walls of the Forbidden City in Beijing, where porcelains were treated like paintings. While Beijing could only operate on a small scale, both in terms of quantities and sizes, the imperial workshops at Jingdezhen were not limited in this regard, which Tang Ying took full advantage of. In his development of yangcai at Jingdezhen, he emphasized both exclusive designs and individual attention to each piece or pair. Every piece was a technical tour de force that required dozens of rounds of production processes; and some–like the present vase–were so challenging that he excused himself for not submitting more to the Palace.

The formal designs on the yellow ground with their curled feathery fronds are strongly influenced by the Western Rococo style that flourished during the reign of King Louis XV (r. 1715-1774) of France. While rocaille (Rococo) elements were typically, however, used in asymmetric compositions, they are here assembled with pearl strings and purely Chinese motifs such as the double fish, ‘good luck’ talismans, ruyi lappets and musical stones, to a formal symmetric ‘necklace’ gracing the neck of the vase, the pearls depicted with reflecting highlights to render them three-dimensional, the lappets shaded in tones of grisaille.

The adroit workmanship and opulent historical and visual components inspired by China’s vast history are a lavish manifestation of the Qianlong Emperor’s eagerness to display the strength and legacy of his epoch as parallel to that of the great rulers of China’s illustrious history. Similarly, the adaptation of Western rocaille motifs indicate his ambitions in progress and openness to ideas from Europe, a practice initiated by his grandfather, the Kangxi Emperor (r.1654-1722).