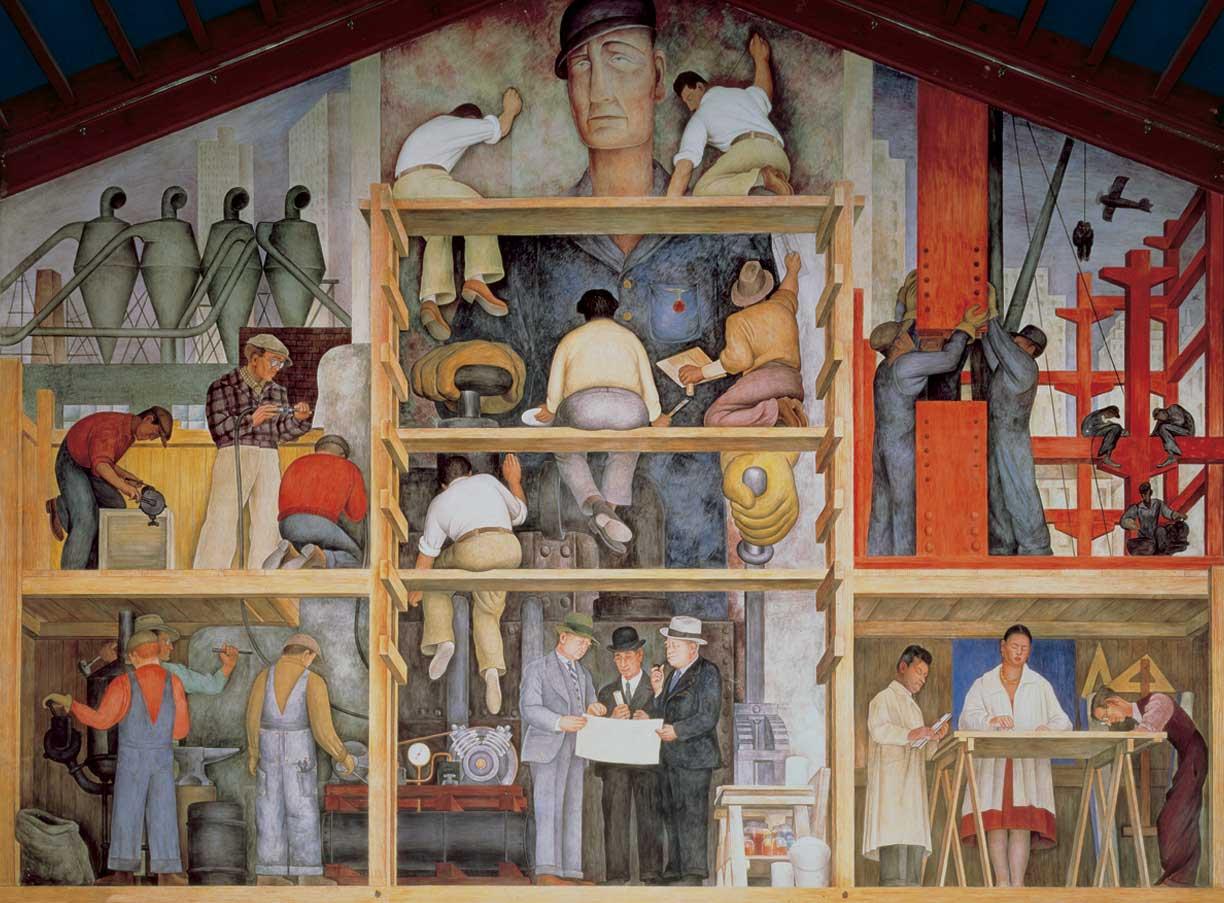 Diego Rivera, The Making of a Fresco Showing the Building of a City, 1931. Mural at the Diego Rivera Gallery, San Francisco Arts Institute.

In 1931 when Mexican muralist Diego Rivera visited San Francisco with his wife, Frida Kahlo, both were still up-and-coming artists. The commissions Rivera had booked in San Francisco were major achievements in his career, opening a new market for his work in the US. The frescoes he created that year, one at what is now the San Francisco Art Institute (SFAI) and the other at the Pacific Coast Stock Exchange, continue to draw visitors and scholars to San Francisco to admire his work. 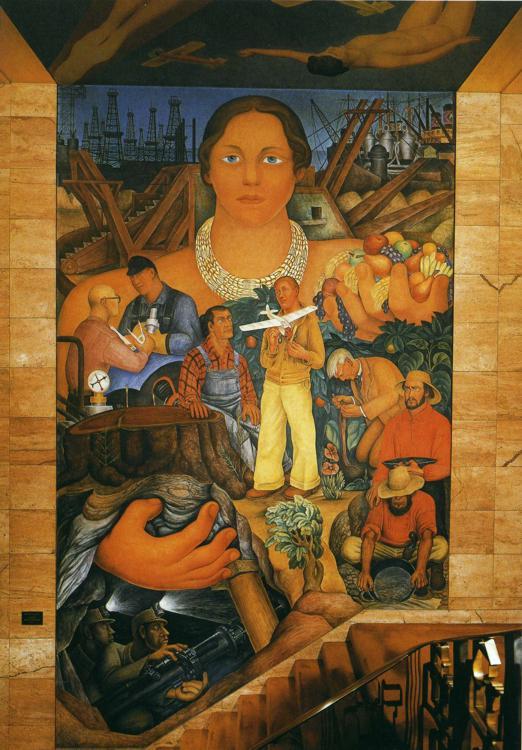 Diego Rivera, The Allegory of California, 1931.

A recent proposal to sell and move one of these paintings has led to widespread outcry from the public and San Francisco art and preservation officials. The Making of a Fresco Showing the Building of a City, painted in May 1931, has long been a jewel of SFAI, adorning their Diego Rivera Gallery, a space for students to show their work. The trompe l'oeil fresco teems with energy and action, showing all of the work that goes into painting a mural or building a city. Populated by engineers, artist assistants, sculptors, architects, and general laborers, each does their part to construct the image of the larger-than-life helmeted worker.

Rivera put his strong Communist ideals at the forefront in this fresco and in many of his other works. Here he glorifies the manual laborer as the backbone of industry and progress. His political beliefs and negative views of the exploitative forces of capitalism would cause controversy during his career and even after his death. During the Red Scare of the McCarthy era, The Making of a Fresco Showing the Building of a City was hidden from view.

Now, however, the painting is a major point of pride for SFAI. Watching over their gallery of student work, it serves as an encouraging reminder of all the hard work that goes into creating anything great, and of the importance of teamwork and community support.

Despite the fresco’s importance, recent financial difficulties, exacerbated by COVID-19, led SFAI to consider selling the piece. Valued at $50 million, the sale of the work might have revitalized the school, though many said the cost of losing the mural would have been too great. This sense of disapproval was solidified in a San Francisco Board of Supervisors vote on Tuesday, January 12. In a sweeping 11-0 tally, board members agreed to start the process of designating the mural as a landmark. 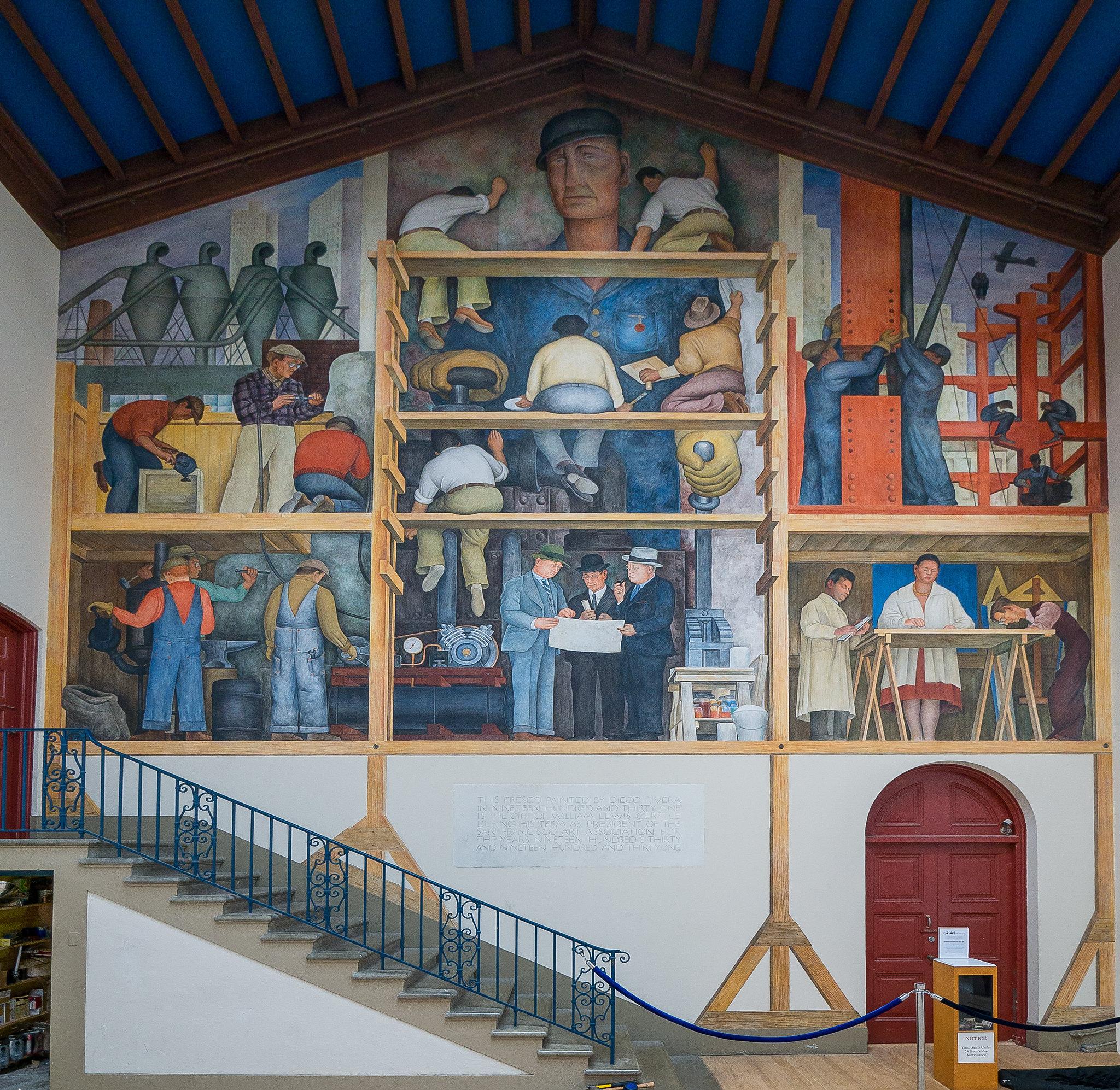 Diego Rivera, The Making of a Fresco Showing the Building of a City, 1931.

The 150-year-old private art school near Fisherman’s Wharf has an impressive roster of former students and professors, many of whom put their weight behind keeping the artistic treasure in its historic home. These individuals are now expressing relief. If the mural does receive landmark status, selling will still be technically possible for SFAI, but moving it would become a multistep process filled with bureaucratic red tape and requiring the approval of San Francisco’s Historic Preservation Commission.

It was rumored that George Lucas had been interested in the work for his Museum of Narrative Art, set to open in Los Angeles in the coming years. The museum has said it will not comment on this speculation.