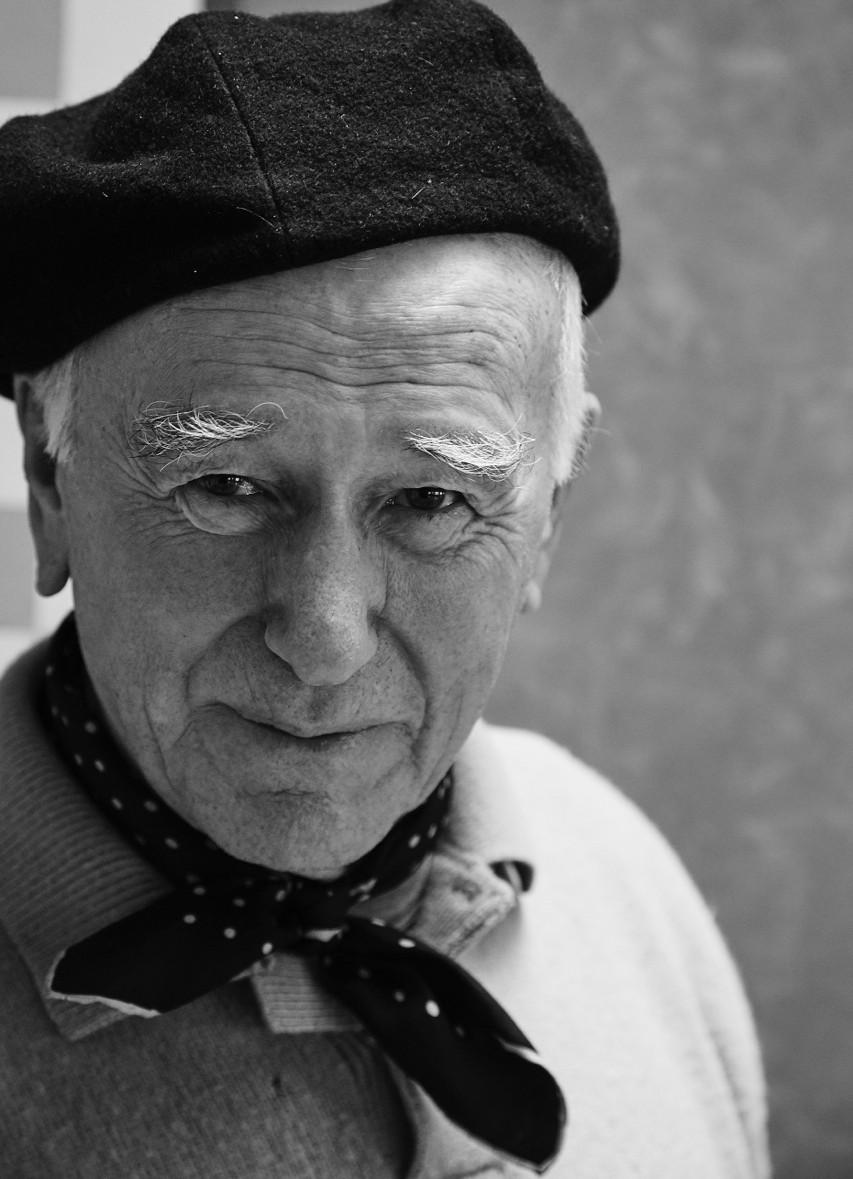 While Los Angeles is one of the country’s leading cities for artmakers, it is not yet a developed art market despite last year’s inaugural Frieze LA, the success of which spawned a second iteration (February 14-16). Modern art in the city dates to the late 1950s and the Ferus Gallery, home to a who’s who of the era including Ken Price, John Altoon, Craig Kauffman, Larry Bell and Billy Al Bengston among others. With the vital art markets thousands of miles away in New York and Europe, they were what Ferus curator Walter Hopps called “the dream colony,” free from trends and market forces since no one was buying their work anyway.

“It’s so long ago and it’s long gone and I wish it weren’t,” Bengston tells Art & Object. Part of the LA-based Finish Fetish school in the early 1960s, he used lacquered spray paint borrowed from his motorcycle racing and maintenance side-gig to paint Chevrons, a motif commonly identified with his work. “It was much more laid back in those days. It was just a bunch of pals. If we had two nickels, we’d borrow another and go by a drink.” 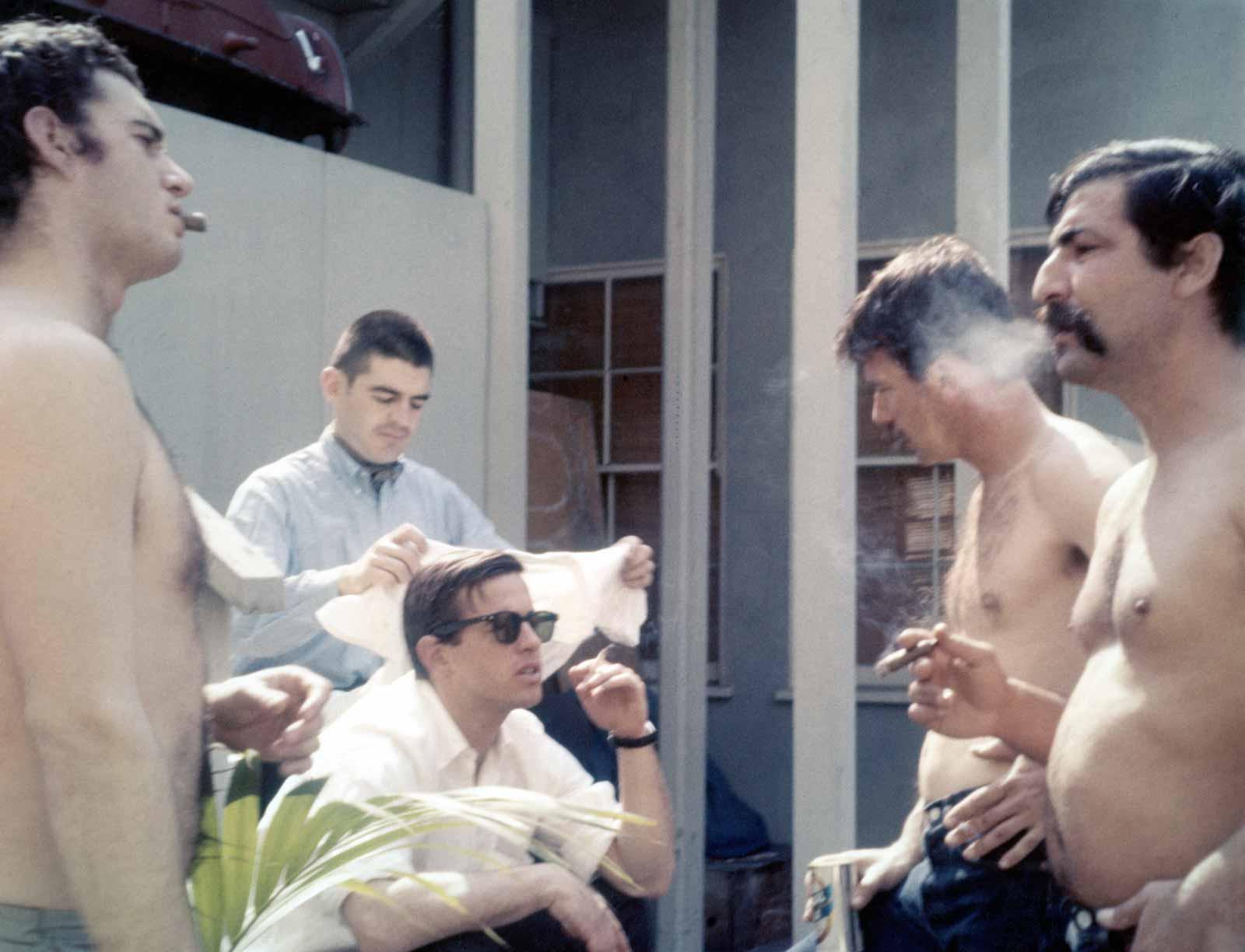 The scene at Ferus Gallery.

Many of them lived in Venice but often hung around Ferus Gallery in West Hollywood, on North La Cienega across from Barney’s Beanery where they went for beer when they had two nickels. Curated by Walter Hopps and Irving Blum, the gallery was the first to show Andy Warhol’s soup cans. When they didn’t sell as a set, Blum bought all 32 of them for a mere $3,000. Hopps organized the first ever Marcel Duchamp retrospective in 1963 at the Pasadena Art Museum when the groundbreaking artist was a spry 76 years old.

“Walter was a genuine genius. He was smarter than anybody and he was more devoted to the arts than anyone could be. Keinholz ‘keinholzed’ him,” Bengston explains about Hopps’ first partner in the gallery, sculptor-installation artist Ed Keinholz, who was later bought out by Blum. “Keinholz made his money by literally screwing everybody. It’s true.” 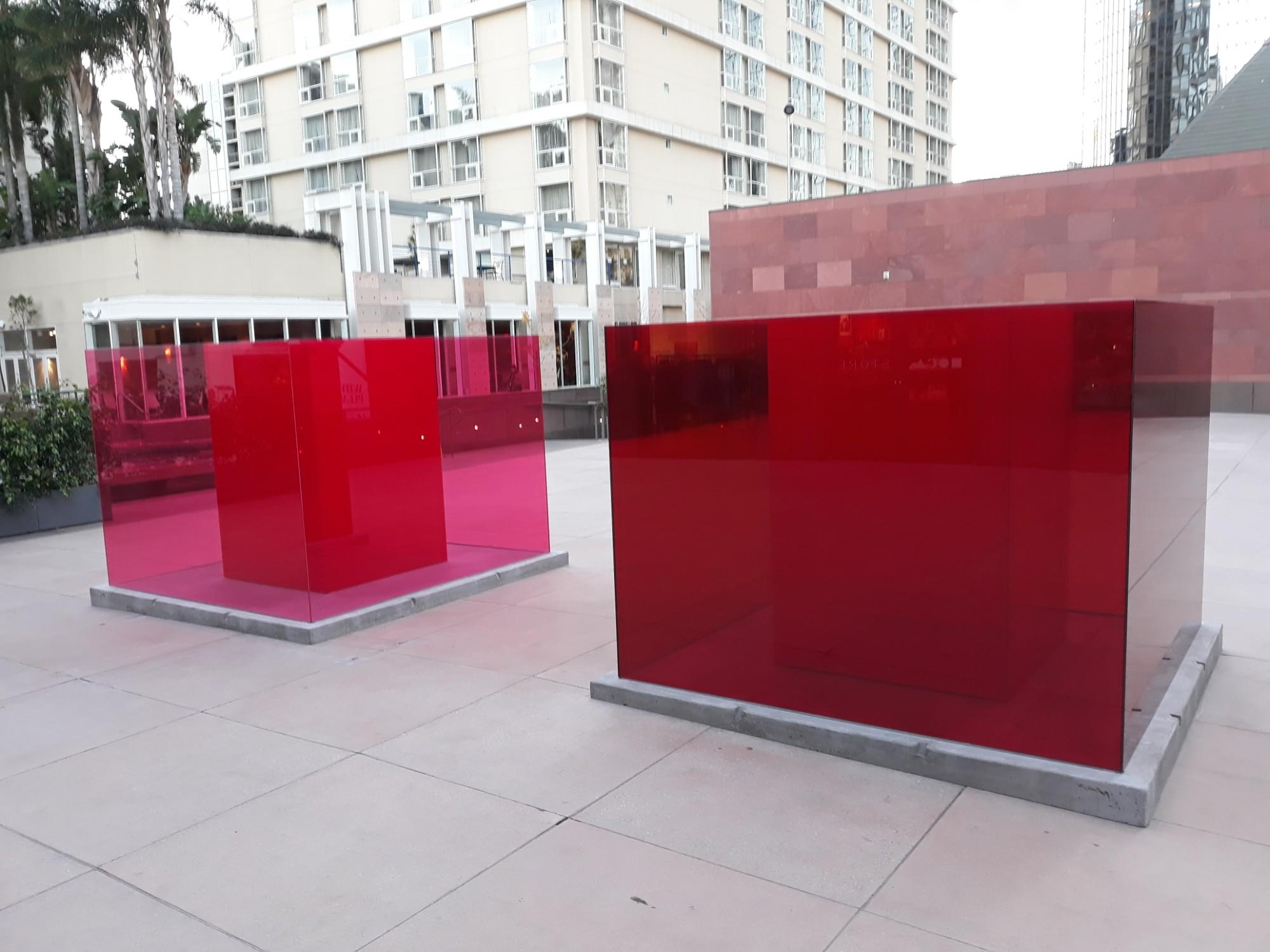 Sculptor Larry Bell was married to the sister of Hopps’ wife, Shirley Neilsen, making them brothers-in-law. When Nielsen divorced Hopps and married Blum, Bell became the second partner’s brother-in-law. “It was a fantastic scene with a bunch of great guys. I was just a kid when I started hanging with those guys and probably the bonding element was humor,” he recalls.

Currently, Bell’s glass cube sculptures, Bill and Coo at MOCA’s Nest (2019), adorn the LA museum’s courtyard. As usual, the focus is on the interplay between light and treated glass, a longtime constant in his work that marked him as a member of the LA-based Light and Space movement in the 1960s, typified by others like Kauffman, James Turrell and Robert Irwin, Bell’s professor when he was a student at Chouinard Art Institute.

“I just wanted my effort to seem unique or be unique or feel unique, at least to me, from everything else that was going on,” Bell explains about his early works. “When I made this discovery about glass surfaces, it opened the door to a whole bunch of things that allowed one to change the way light interfaces with a surface but not change the surface. So, you ended up again with something improbable to look at. And that search for me was to keep everything improbable, not only for the audience but for myself. I want a surprise. I don’t want to know what I’m going to do. I wanted to find it.”

Bengston went to LA from Dodge City, Kansas, to attend Otis College of Art and Design so he could study under his idol, ceramicist Peter Voulkos. He soon realized he’d never be as good as Voulkos and switched to painting. Soon, John Altoon became another idol. “Of the established Los Angeles artists at the time that’s the only one,” he says about the larger-than-life Altoon who was later diagnosed as schizophrenic and died at the age of 43 in 1969. “There was only one of us that was cool and that was Altoon. He was without a doubt the most brilliant artist. The rest of us were people who made art. He looked like an artist, he acted like an artist and he was an artist. He had natural talent that nobody else had. He had what artists had.”

Ceramicist/sculptor Ken Price stood as a role model to Bengston. “‘I’m going to go furtherdy out by going furtherdy in,’ that was Kenny,” he says, quoting a characteristically opaque response from Price to a question about his work. The two split a 4,000 square foot studio in Venice for $75 per month, not including utilities. “He’s the only person I know that took ceramics to the highest level you could possibly take it and make a living from it.”

Bengston has choice words for Light and Space artist Craig Kauffman. “He was that particular pain in the ass and he was consistent. He was a smart motherfucker, smart as a whip. And if not for him, I wouldn't have learned a lot of things I learned. He was different than anyone else and he had no problem with that. He didn't want to be part of the gang and he didn’t want to be leader of the gang. He wanted to be who he was and he was stunning at it by the way.  He would come around here and steal a few ideas and I said Craig you can’t do that,” laughs Bengston. “He’d pick his nose and look at me. He was a real intellectual.” 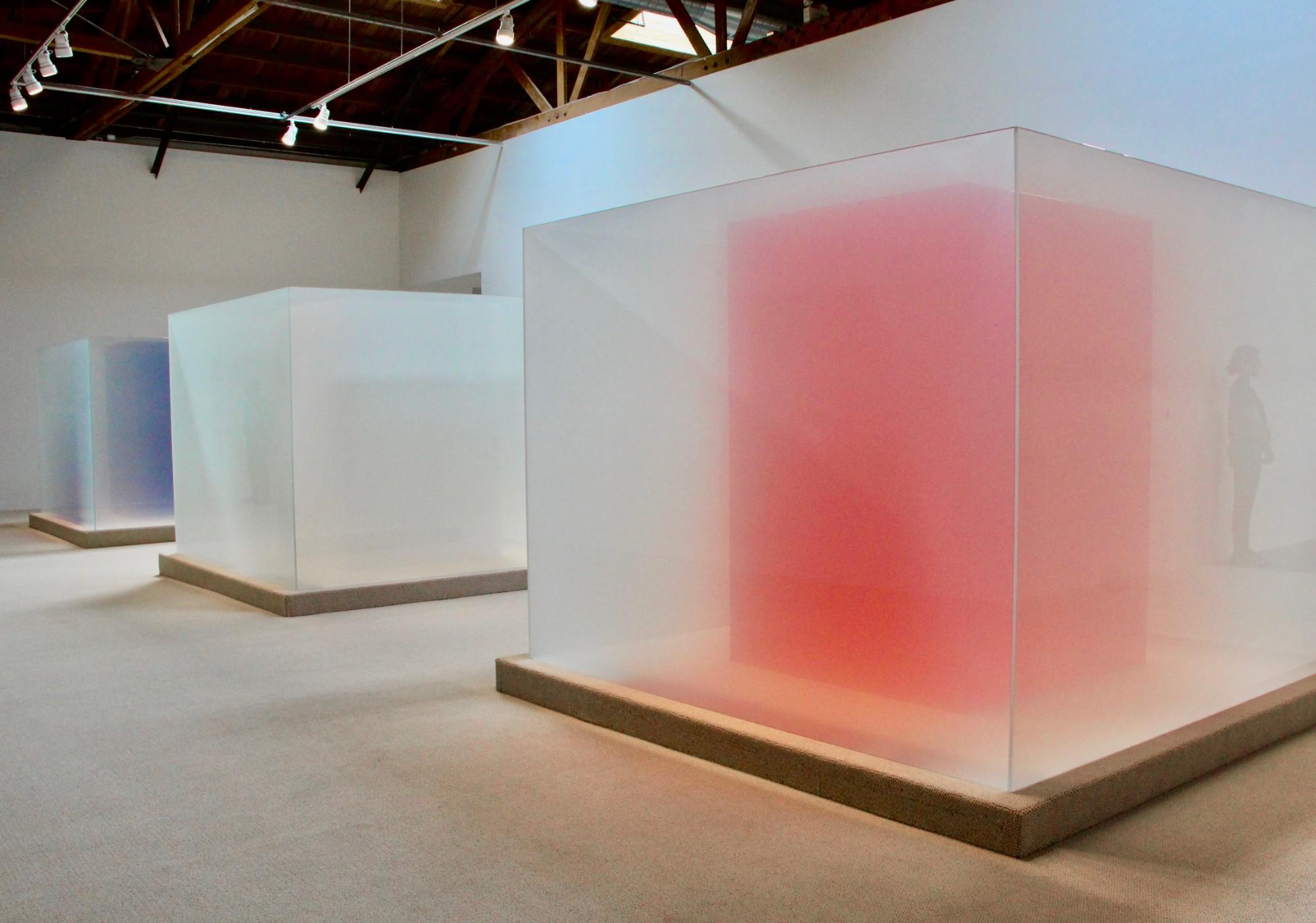 Bengston and Bell, whom Hopps once dubbed “Ben Luxe,” (Latin and Hebrew for “son of light”), used to rifle through thrift shops together at least once a week looking for deals. “Larry was the first born career artist,” Bengston laughs about Bell, who sold out his debut solo show in 1965 at New York’s Pace Gallery, changing the trajectory of his career. “He knew how to play the game.”

These days, Bell’s game is in Taos, New Mexico, and the engineering department of the Colorado State University of Fort Collins, with whom the 80-year-old artist is working on a new glass coating method. “That's the way I’ve been about all my life, one experiment after another. Everything is an investigation and what’s left behind is what some people call art, I just call it evidence. And then you move on.”

At 85, Bengston hasn’t been working much lately. He lives in West LA but isn’t terribly into the art scene, although he still shows at Various Small Fires. “It was bitching. It was very, very nice to have friends. I had a stack of them,” he chuckles. “It’s a fun life and you got to fucking scratch around the edges, trying to get to it and have a few laughs.”