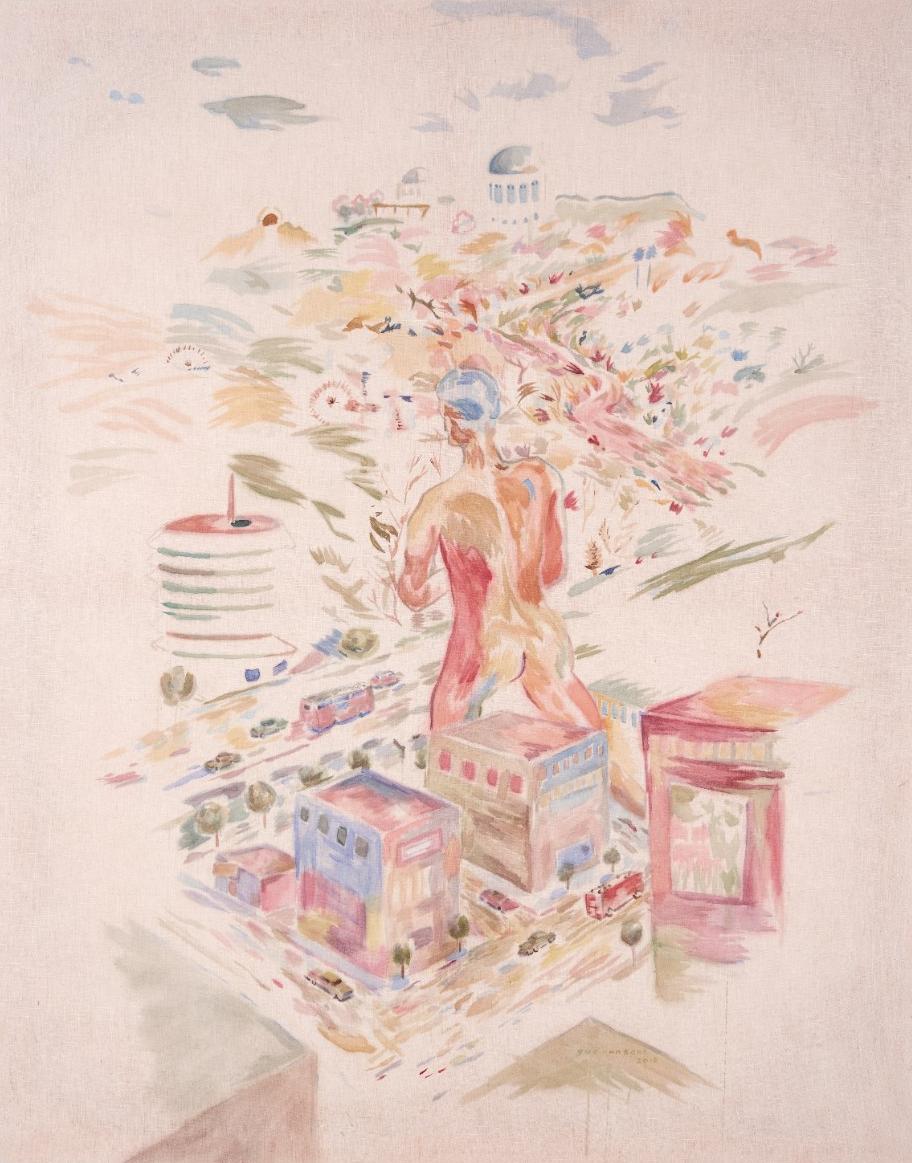 While he’s best known as two-time Oscar-nominated director for such lauded films as Good Will Hunting and Milk, Gus Van Sant began his creative life as an art student at Rhode Island School of Design before switching majors to film. 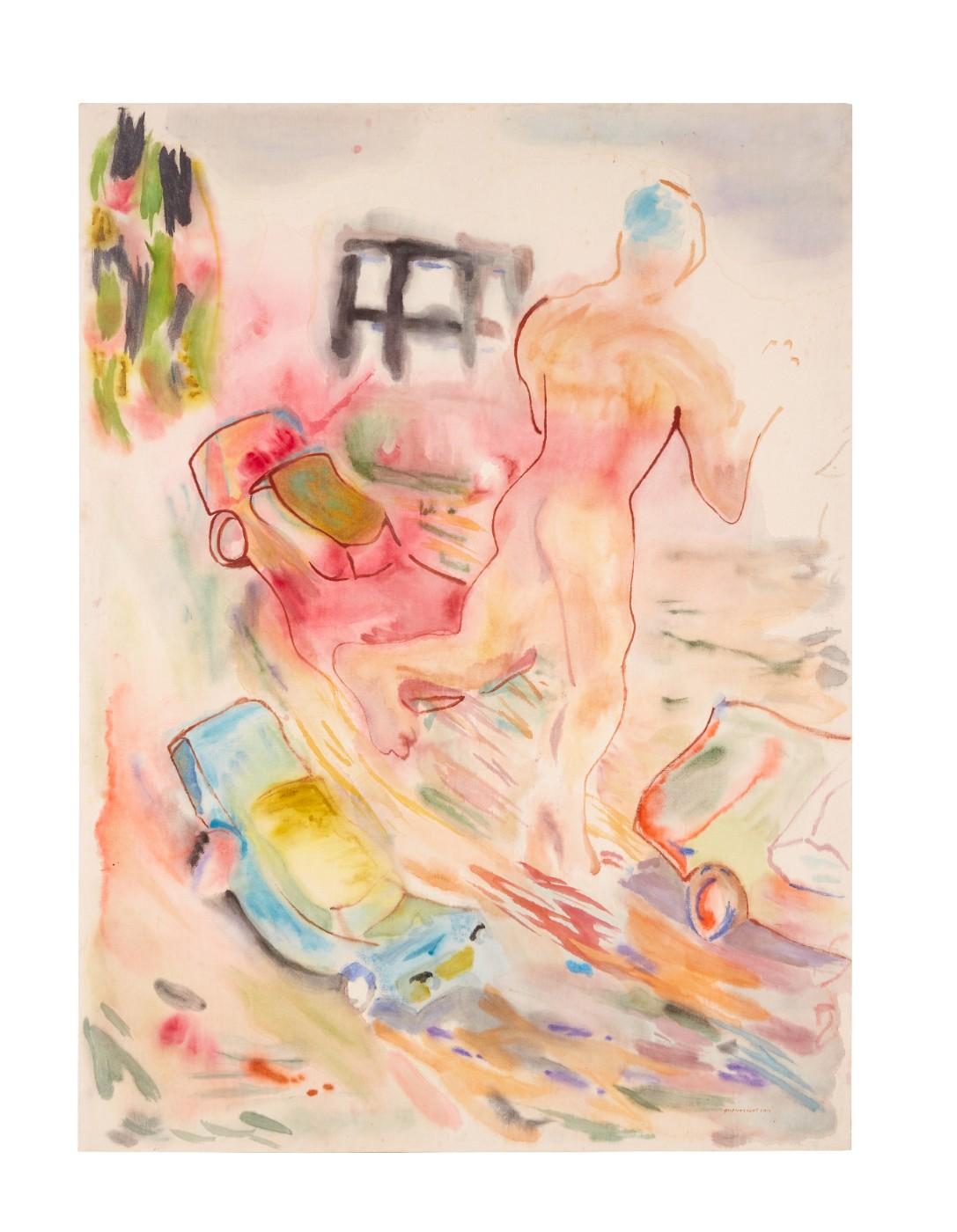 “If you were an abstract painter, you might, when you’re in school, learn to paint like Da Vinci, see how far you can go in different directions,” Van Sant tells Art & Object on a recent sunny late summer morning over coffee on his patio overlooking the Hollywood sign and Griffith Observatory. “Chuck Close was asked how do you arrive at that thing you're known for? And his answer was you do everything until finally something gets you going in the public eye and you freeze into that.”

For decades, Van Sant has been frozen into film. But he has quietly been keeping up his practice, the evidence of which has been on exhibit in venus like Le Case d'Arte in Milan, the Musée de l'Elysée in Lausanne and the Jordan Schnitzer Museum of Art at the University of Oregon in Eugene, among others, as well as a show with James Franco at Gagosian in Beverly Hills in 2011. His new solo show, Recent Paintings, Hollywood Boulevard, is at Vito Schnabel Gallery in Greenwich Village through Nov. 1, a series of nine large-scale figurative watercolors on linen. 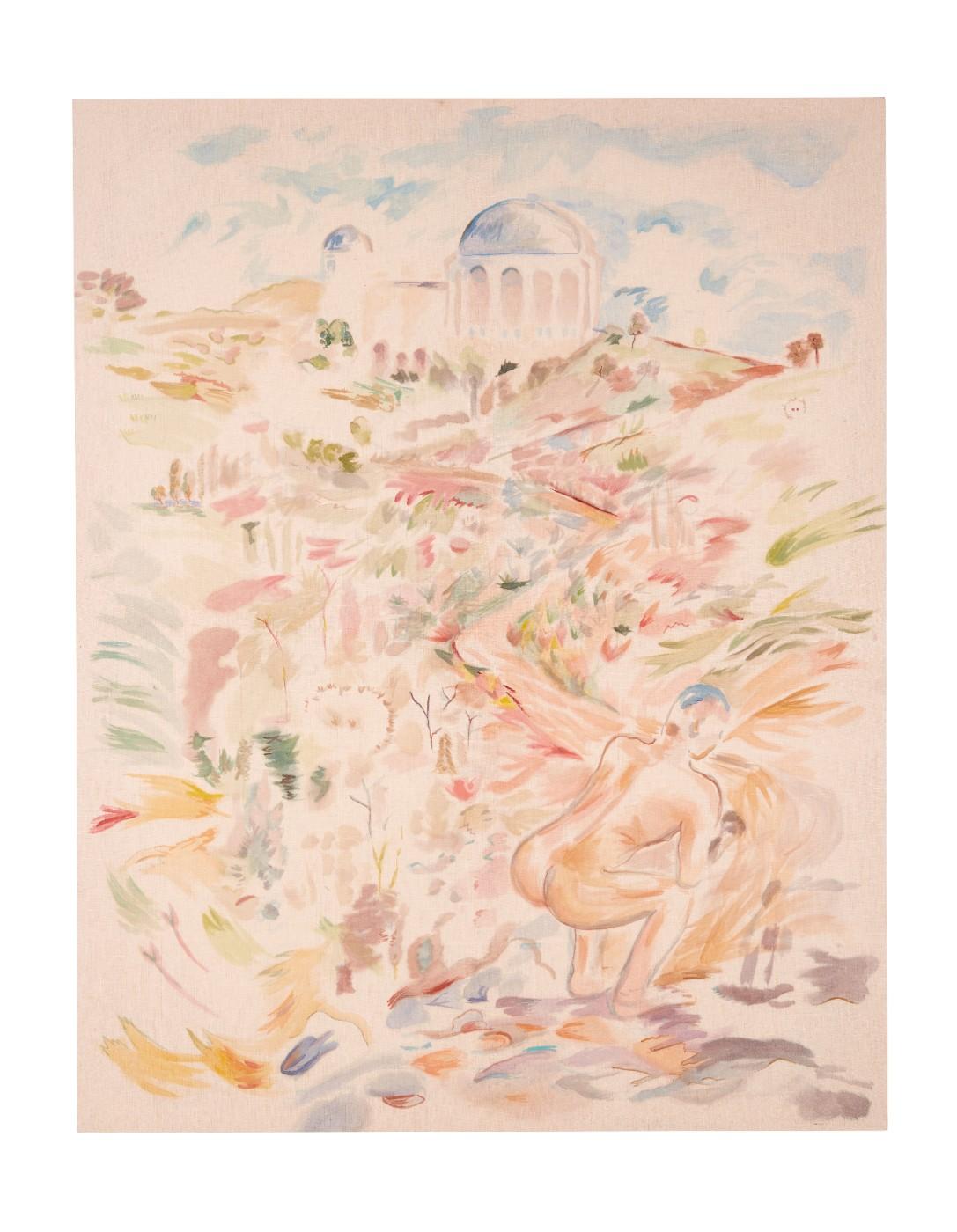 Splashes of vivid color and pale pastels characterize this series of mostly abstract male nudes blending with impressionist cityscapes of Hollywood and L.A. In Untitled (Hollywood 4) a naked colossus stalks Hollywood Boulevard, towering above the Capitol Building. In Untitled (Hollywood 16), a nude kneels beside a parked car. Another crouches on a hilltop overlooking an impressionistic valley, the Observatory in the distance.

“This is just tons of exposure to Hollywood. It's just my environment,” Van Sant says, recalling his days living near Hollywood Boulevard in the mid-70s, then revisiting the city in subsequent years for work. “I don’t feel like Hollywood Boulevard has changed one little bit. Way more homeless people. It’s a small town so it changes slower. The city council in Hollywood is like Hoboken in the 50s. It’s like these guys could be singing backup for Sinatra.”

Son of artist/filmmaker Julian Schnabel, gallerist Vito Schnabel met Van Sant several times as a teenager before opening his New York gallery in 2015. In recent years, the artist had put together enough pieces that he was considering a show and thought of contacting Schnabel when they bumped into each other one day by chance. Van Sant invited him over for a look, after which Schnabel said, “Let’s do it!” 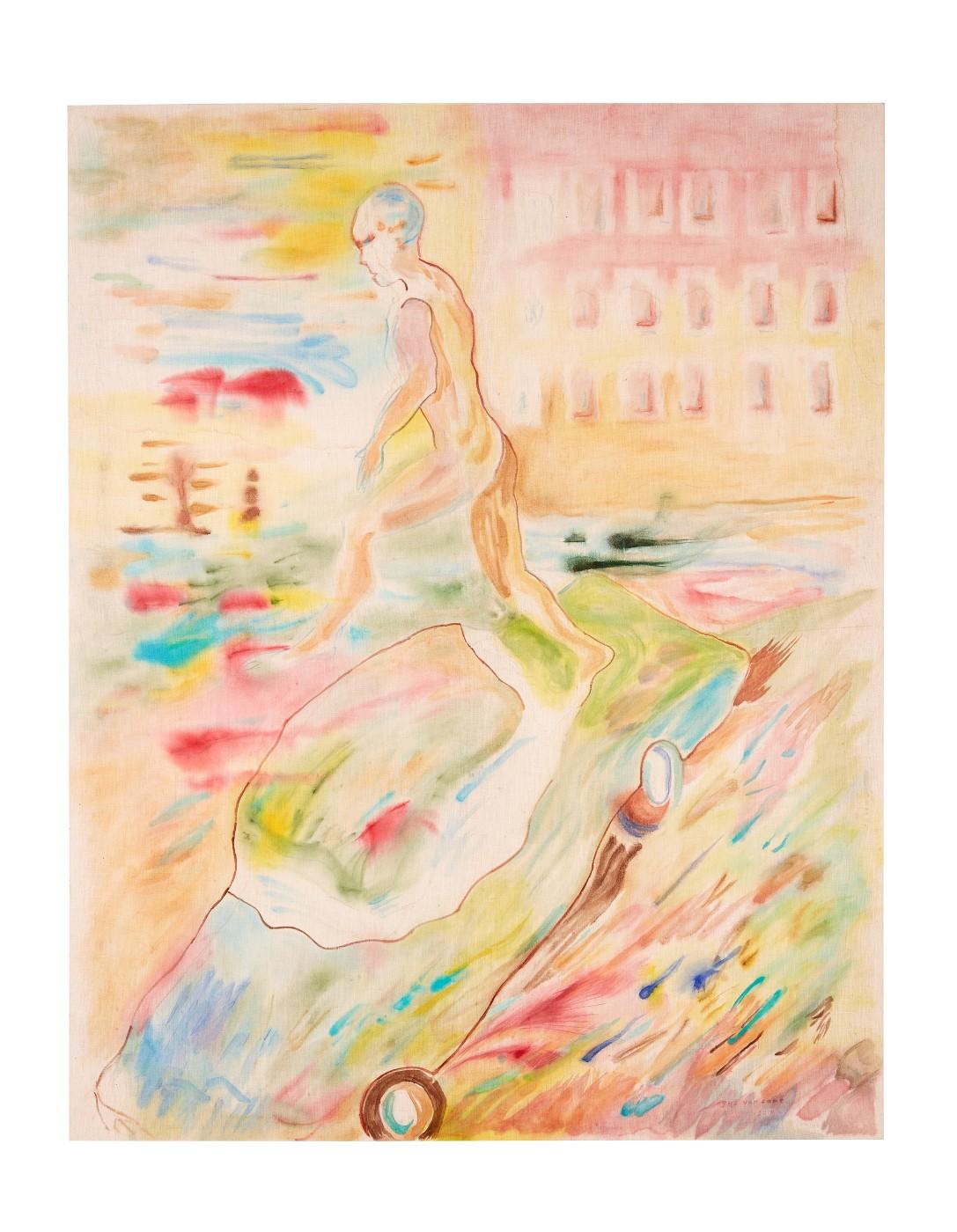 “What’s unique about Gus is that he uses watercolor on linen, not on paper. Watercolor is swashy on paper, but these are less watery and it kind of gives his paintings a different effect,” Schnabel explains.

Van Sant’s aesthetic is rooted in the late 1950s and early 60s, when the art world was moving beyond abstract expressionism into pop art, dispensing with all that black and embracing a brighter palette and bold simple graphics. He anticipates some fans teasing out associations between the watercolors and his film work, but ultimately feels they’re two very different art forms that seldom crossover. A possible exception is his 1997 movie, Good Will Hunting, which featured a painting by him in the office of a therapist played by Robin Williams.

“I thought of it as a little dreamier abstract than it is in the movie. I'm not sure it’s better with the painting. It was such a specific thing and I was one of the people trying to paint this painting. We had a bunch of different people doing it as well as myself, so I chose mine,” recalls Van Sant, who wound up giving the painting to Williams. It was auctioned by Sotheby's for $90,000 in October of last year following the late star’s death in 2014. 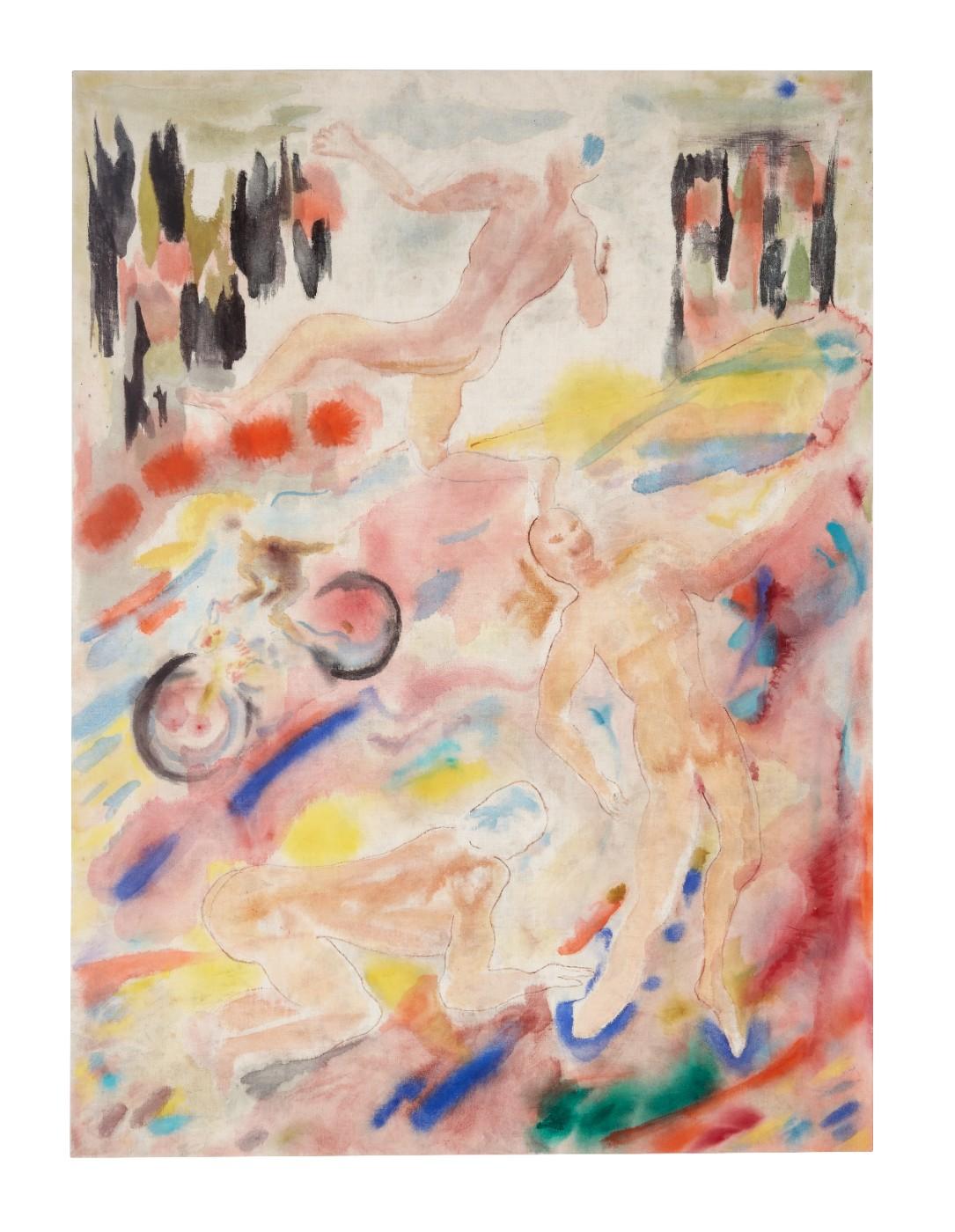 Oscar nominee or not, it’s hardly a sure thing the art world will embrace Van Sant with open arms. Hollywood names like Sylvester Stallone and Anthony Quinn have put brush to canvas before, eliciting barely a yawn in fine arts circles. “If an artist wants to create in another medium, they should absolutely do that,” offers Schnabel, whose father transitioned from fine arts to filmmaking, winning Best Director at Cannes for The Diving Bell and the Butterfly. “Whether it be Rashid Johnson, who makes paintings and just made his first movie, or Tom Sachs or Gus, who’s to tell him he’s not allowed to do what he wants to do?”

Consoling words, no doubt, but they do little to assuage Van Sant. “The art world can also be subjective, cause the film will be received in respect to its storytelling as opposed to paintings, which have less of a charge,” he reasons. “I don't really know. They have similarities. I think both are businesses and can be difficult.”