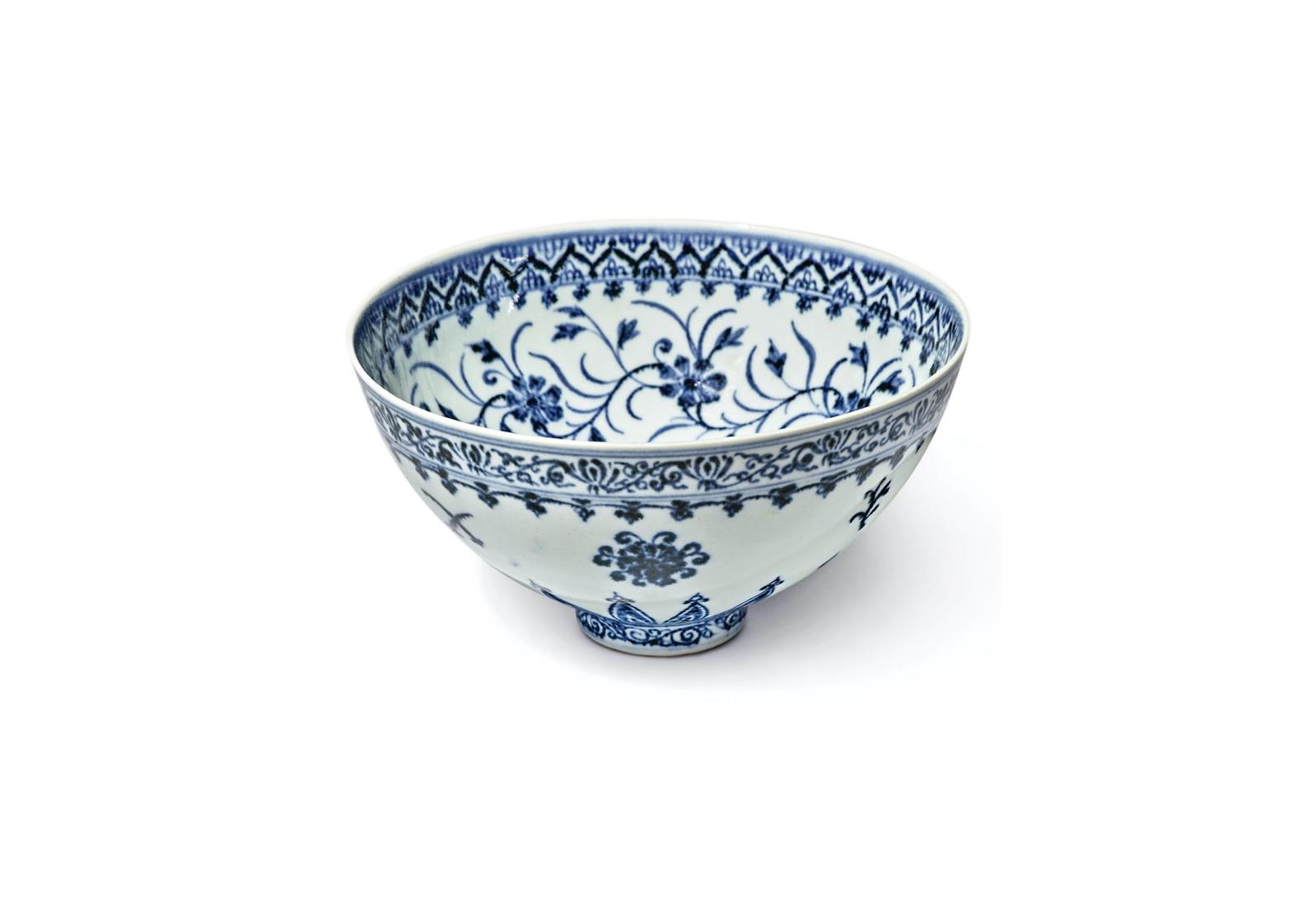 Side view of an exceptional and rare blue and white 'floral' bowl, Ming dynasty, Yongle period.

Last year, a man bought a Chinese bowl for $35 at a yard sale in Connecticut. In March 2021, the very same bowl went for auction at Sotheby’s and was sold for $721,800. The prices that certain artifacts reach at an auction can leave us speechless. The exorbitant price ($450,312,500) paid for Salvator Mundi by Leonardo back in 2017 is only one of the most recent examples. While, for a painting by Leonardo, such a price is somehow understandable, the reasons behind the high prices for Chinese porcelains can appear more mysterious. 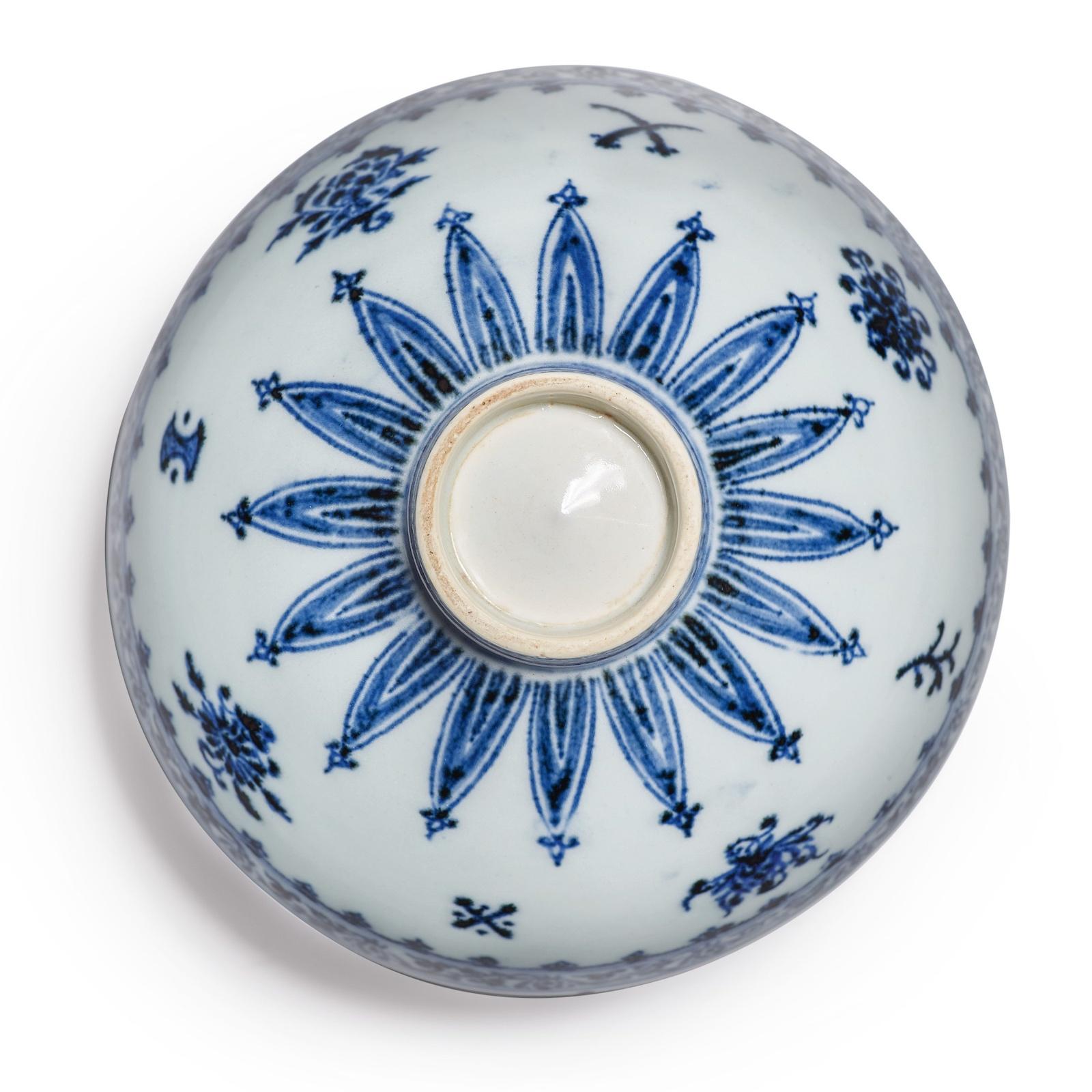 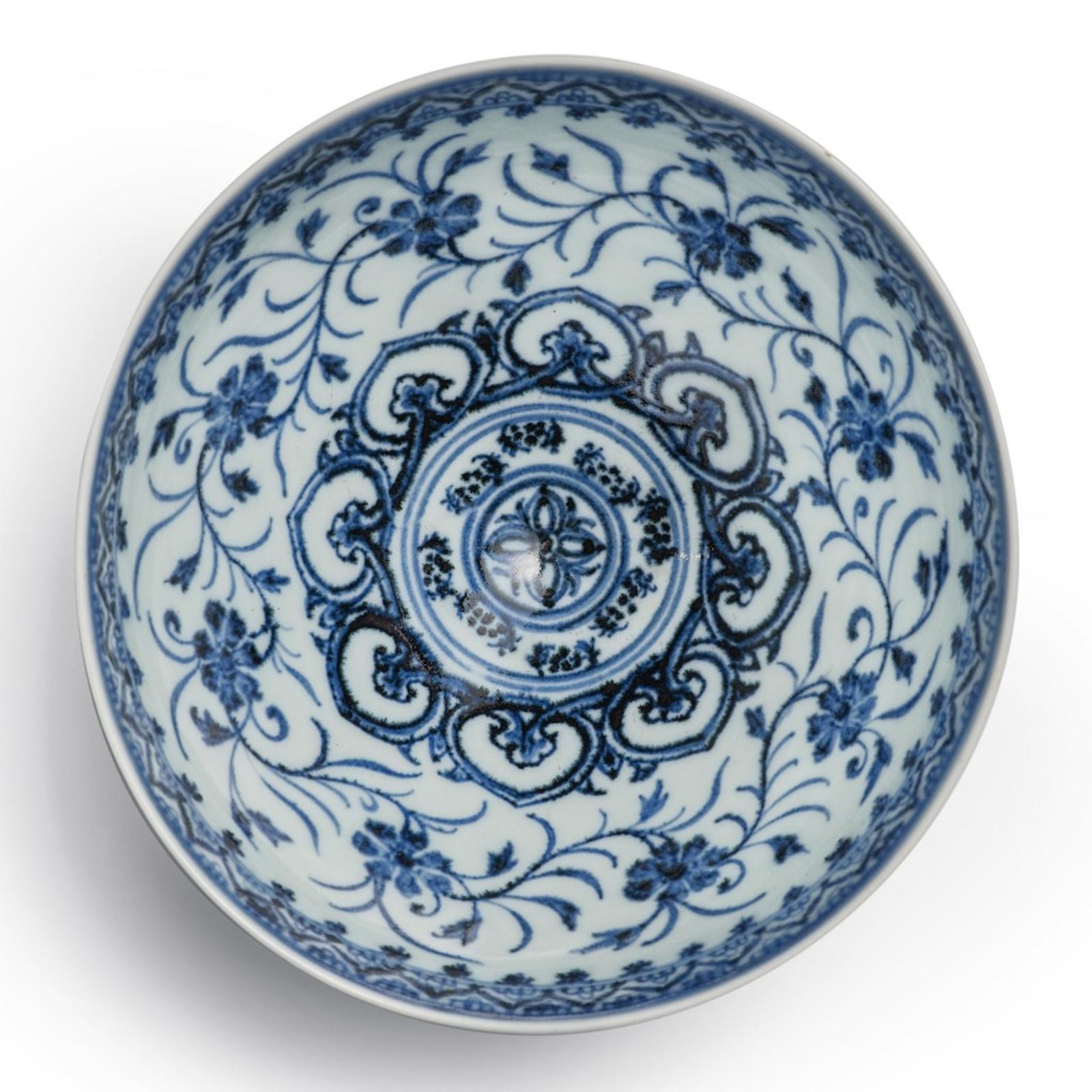 The white and blue bowl found at the yard sale in Connecticut has exquisite motifs of lotus, chrysanthemum, peony, and pomegranate blossoms on a smooth body and flawless glazing. This perfection was achieved on a very small vessel as the diameter of the bowl is a little over six inches (fifteen cm). Thanks to the expertise of Angela McAteer, head of the Chinese Department at Sotheby’s, and specialist Hang Yin, the bowl was dated back to the early fifteenth century and the reign of the Yongle emperor, the third ruler of the Ming dynasty (1368-1644). Yongle was a central figure in the development of Chinese porcelains. He introduced the practice of applying reign marks to every piece of porcelain and high-quality artifacts created for the court. Under his reign and patronage, the city of Jingdezhen, in the southern province of Jianxi, became the only area to make imperial ceramics.

In The Troubled Empire, historian Timothy Brook reports the taste for white and blue pottery originated in Persia. “The ban in the Koran on the ostentatious practice of eating off gold or silver plates ... created for blue-and-white an opening among wealthy Persian consumers who wanted to serve their guests on expensive tableware.” While Persian potters had plenty of dark cobalt, they lacked the skills to craft high-quality porcelains. Seeing an opportunity, Chinese potters began to produce white and blue porcelains for the Persian market from the fourteenth century. 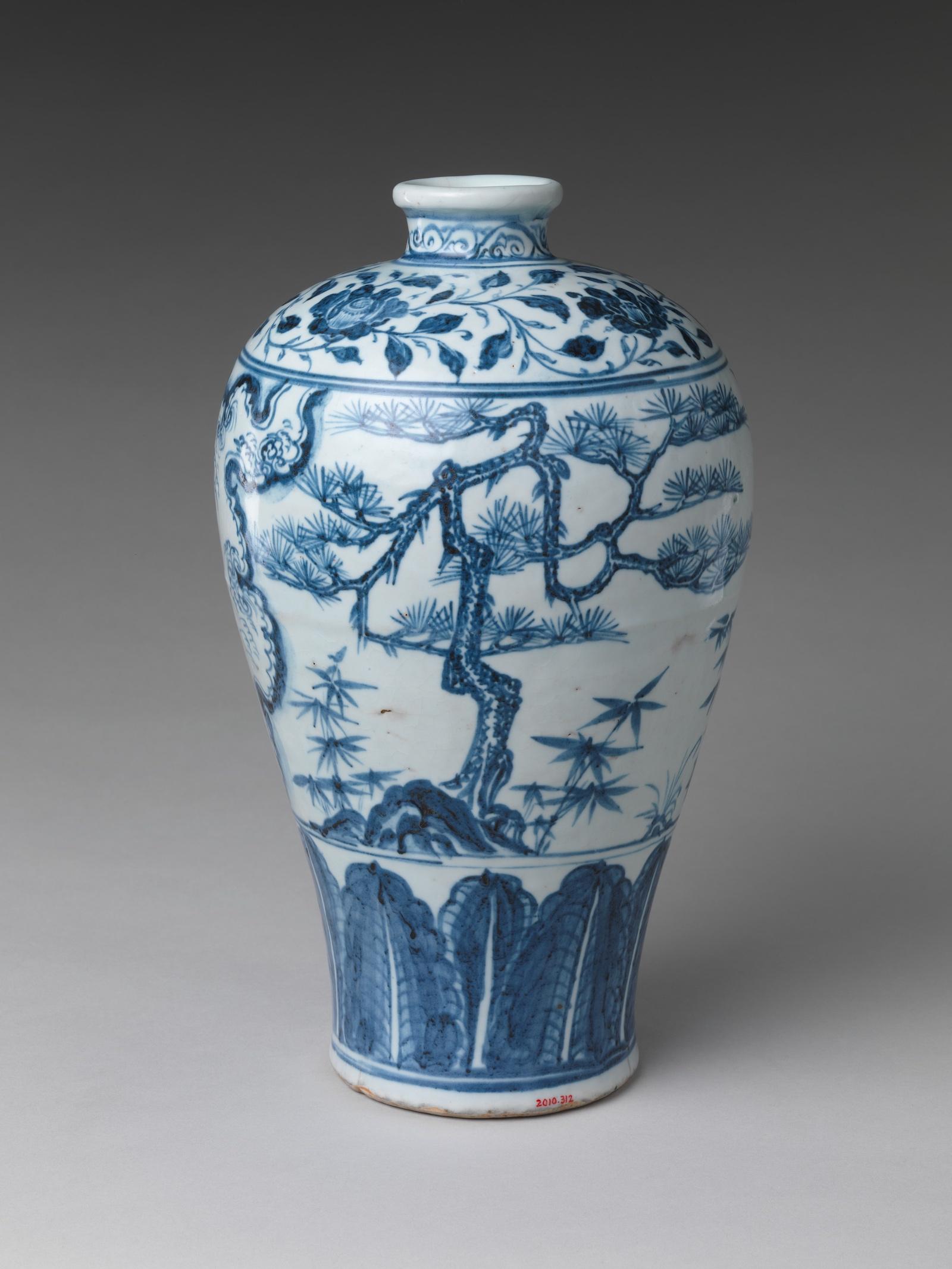 Vase in Meiping Shape with Daoist Immortal Zhongli Quan, second half of the 15th century.

Dr. Amy Matthewson, an expert in Chinese visual and material culture, explains that porcelain holds a special place in the Chinese artistic and cultural environment as it, “is distinguished from other types of ceramics by its whiteness, smoothness, and translucence.”

Moreover, she notes that the production of porcelain, “requires special clays and high temperature firing at 1280-1400 degrees Celsius. The clays were found in particularly pure form in Jingdezhen which also was favored with access to forest-covered mountains for fuel and rivers for inexpensive transport ... imperial patronage led to a rapid increase in the production of high-quality porcelain at Jingdezhen.”

It becomes clear that the combination of high-quality raw materials, handicraft skills, and imperial affiliation increased the monetary and cultural value of porcelain objects in China. But how did the West become so fascinated with Chinese porcelain?

Between the seventeenth and eighteenth centuries, thanks to a more globalized trade market, Asian porcelain appeared in the cabinets and drawing rooms of many European houses. A substantial part of China’s export was constituted by chinoiserie—Chinese objects, motifs, and designs—tea, silk, and, of course, porcelains. More specifically, the white and blue porcelains created in Jingdezhen were recognized as a global phenomenon as they embodied the foreign and exotic as well as a different type of art and culture. During the Victorian era, the market for the mid-low classes was occupied by British-made white and blue wares as not everybody could afford the original Jingdezhen porcelains. 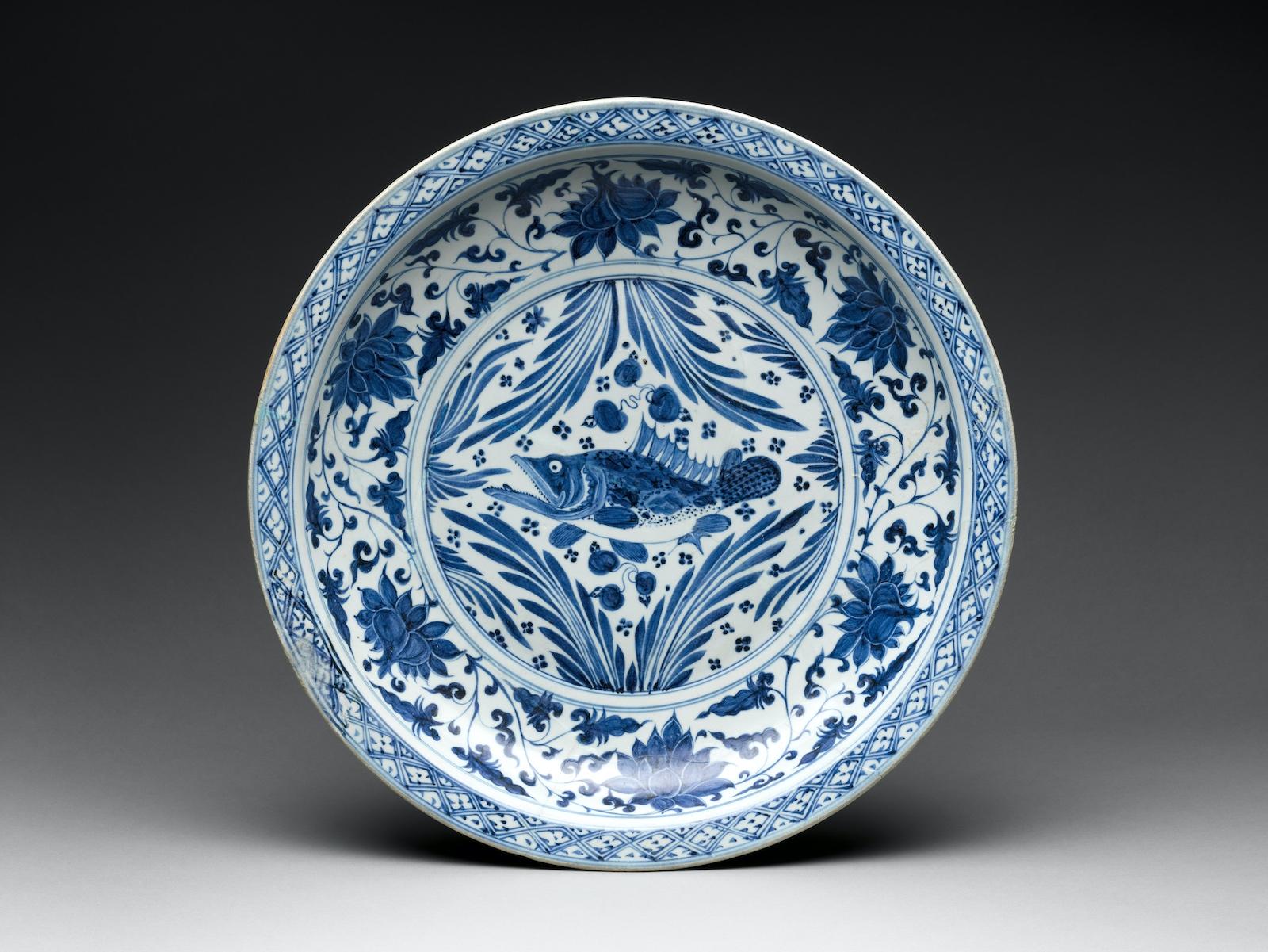 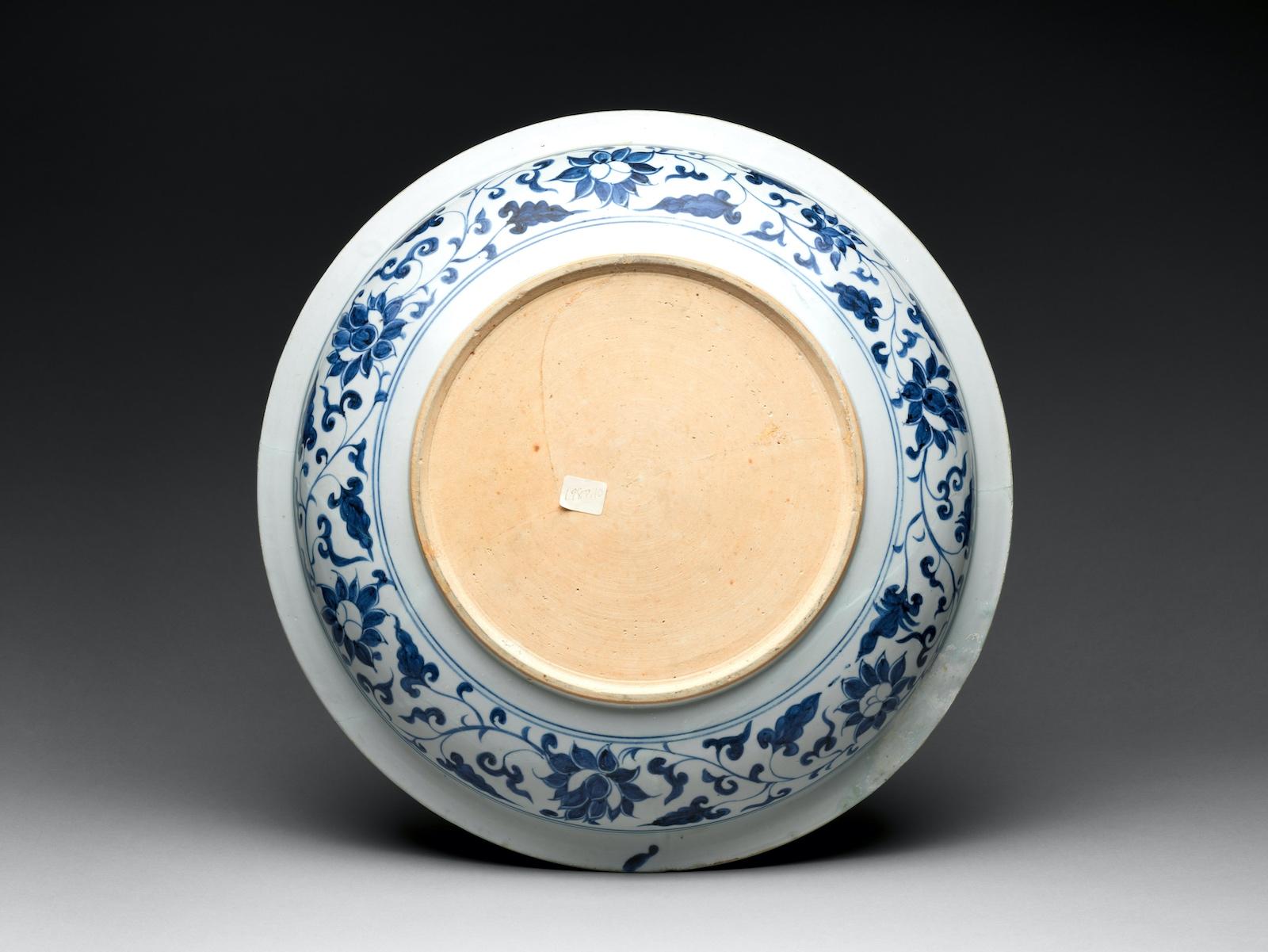 As Matthewson points out, the availability of porcelains blurred the line between experts and commoners, working and middle-upper class, decorative pieces, and household items. “The real experts tend to pay attention to the six marks on the bottom of the vessel that [date] the piece to the reigning Chinese emperor on the throne at the time the piece was made.” The artist, contrary to what we are used to in the West, seems to have no bearing on the value of the porcelains.

“Mass production techniques were employed at both private and imperial workshops,” Matthewson clarifies. “Potters did not see an object through from the mixing of the clay to the firing and packing; rather there were separate workshops involved in each process … Those who painted on the underglaze designs, for instance, needed to work in very clean quarters, far from those who handled wet clay or chiseled partially dry clay so one cup could easily pass through more than a dozen hands.”

We can therefore conclude that the type of decoration and glazing, the location and time of production, and the emperor’s seal are the framework through which experts assess the value of a porcelain object. It is quite obvious that the $721,800 bowl found at the Connecticut yard sale is a once-in-a-lifetime discovery, especially because McAteer noted, to date, there are only six other bowls of that kind in the world. So, it might be the perfect moment to go and check that old Chinese bowl that is gathering dust on your bookshelf.