Bisa Butler is Having a Moment 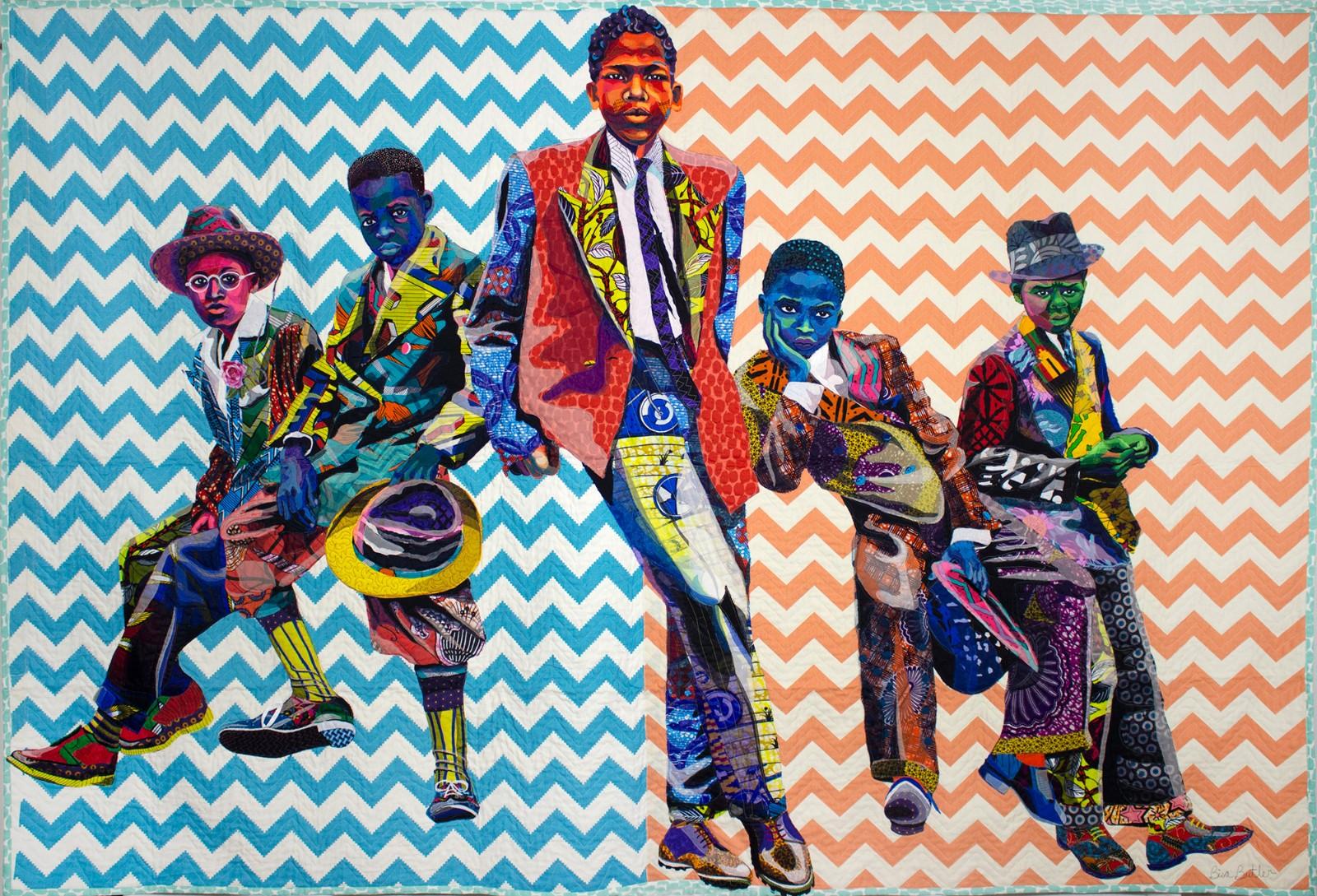 The year 2020 was shaping up to be a watershed moment in the career of New Jersey-born Brooklyn-based quilt artist Bisa Butler. Having been a finalist for the Museum of Arts and Design’s prestigious Burke Prize in 2019, Butler’s quilted portrait of Wangar Maathai, an environmental and women’s rights activist who was the first African woman to win the Nobel Peace Prize, was selected to be a Time Magazine cover for their special double issue honoring 100 women of the year in 2020. Butler had just opened her first show at Harlem's Claire Oliver Gallery, and was slated to open her first solo museum show at the Katonah Museum of Art in upstate New York. The exhibition was set to open on March 15 and then would travel to the Art Institute of Chicago in September. 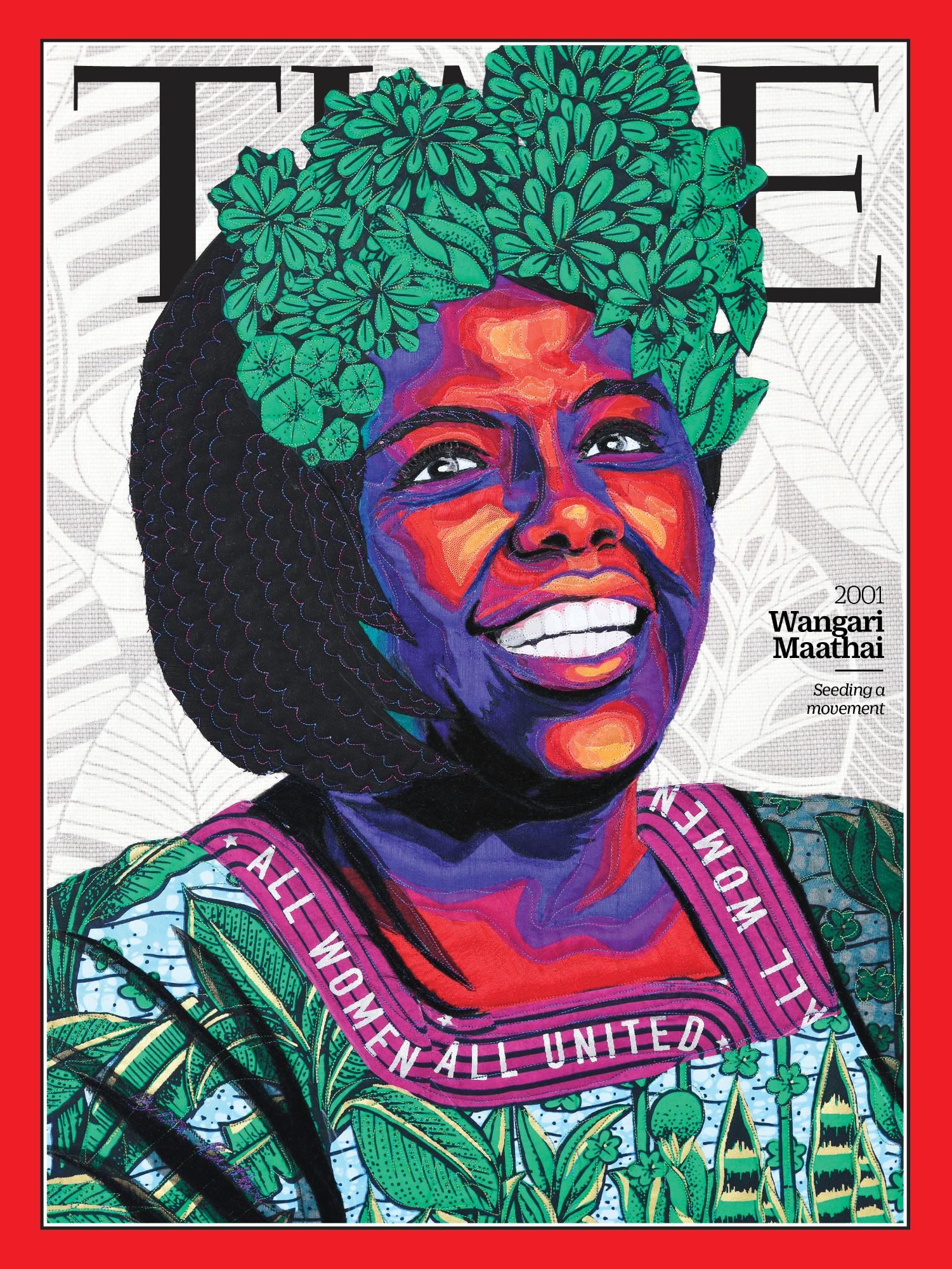 Her most ambitious project to date, To God and Truth, measuring 10 x 12 feet and featuring nine, life-sized figures of the famed 1899 baseball team from Morris Brown College, a Christian, historically black liberal arts college in Atlanta, had just been acquired by the Museum of Fine Arts, Boston. Their senior curator in the department of textile arts and fashion, Lauren Whitley had traveled to Butler’s home studio in 2019 to view the piece in progress that the museum had already stated, unequivocally, they were eager to purchase. 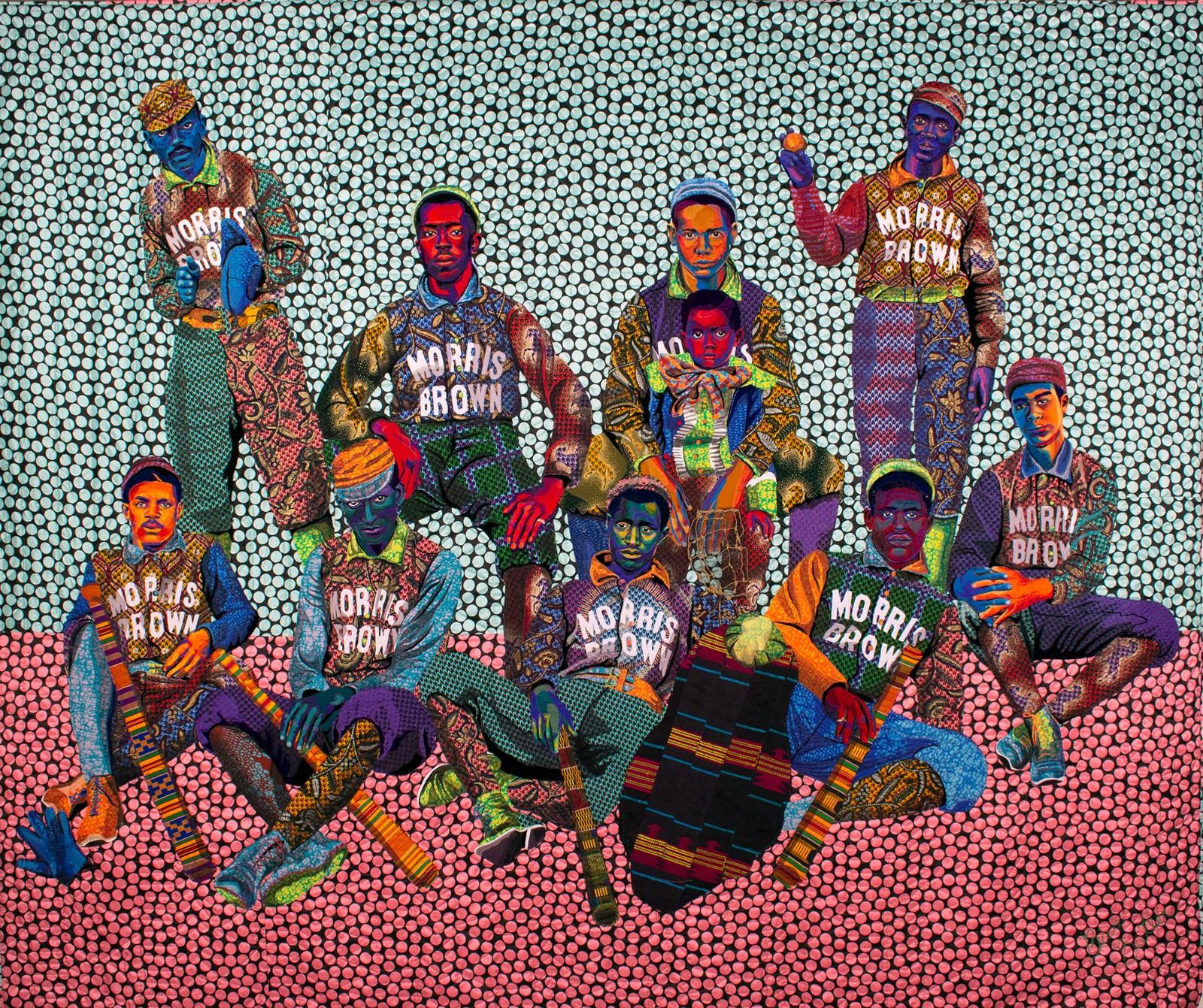 “It was an incredible experience… It was deeply rewarding to discuss Bisa’s connections with family, fabric, and old photographs, and her commitment to giving visual expression to African American lives, often left out of history,” Whitley said. When Butler’s gallerist, Claire Oliver, sent a photo of To God and Truth to MFA Boston before it was finished, she had no way of knowing that Whitley had been working on curating a major quilt exhibition for the past four years. It was set to open in the fall of 2020 and when Whitley saw Butler’s new piece, she knew immediately they had to have it for the show and for the museum’s permanent collection.

When Bisa Butler spoke to Art & Object on March 16, her debut solo show at Claire Oliver Gallery had just closed in response to COVID-19. The aptly titled exhibition, The Storm, The Whirlwind, and The Earthquake, had been packed, people rubbing shoulder to shoulder on February 29 when it opened to great fanfare. It was slated to run through April 25, 2020. Now, the only way to see it is virtually. 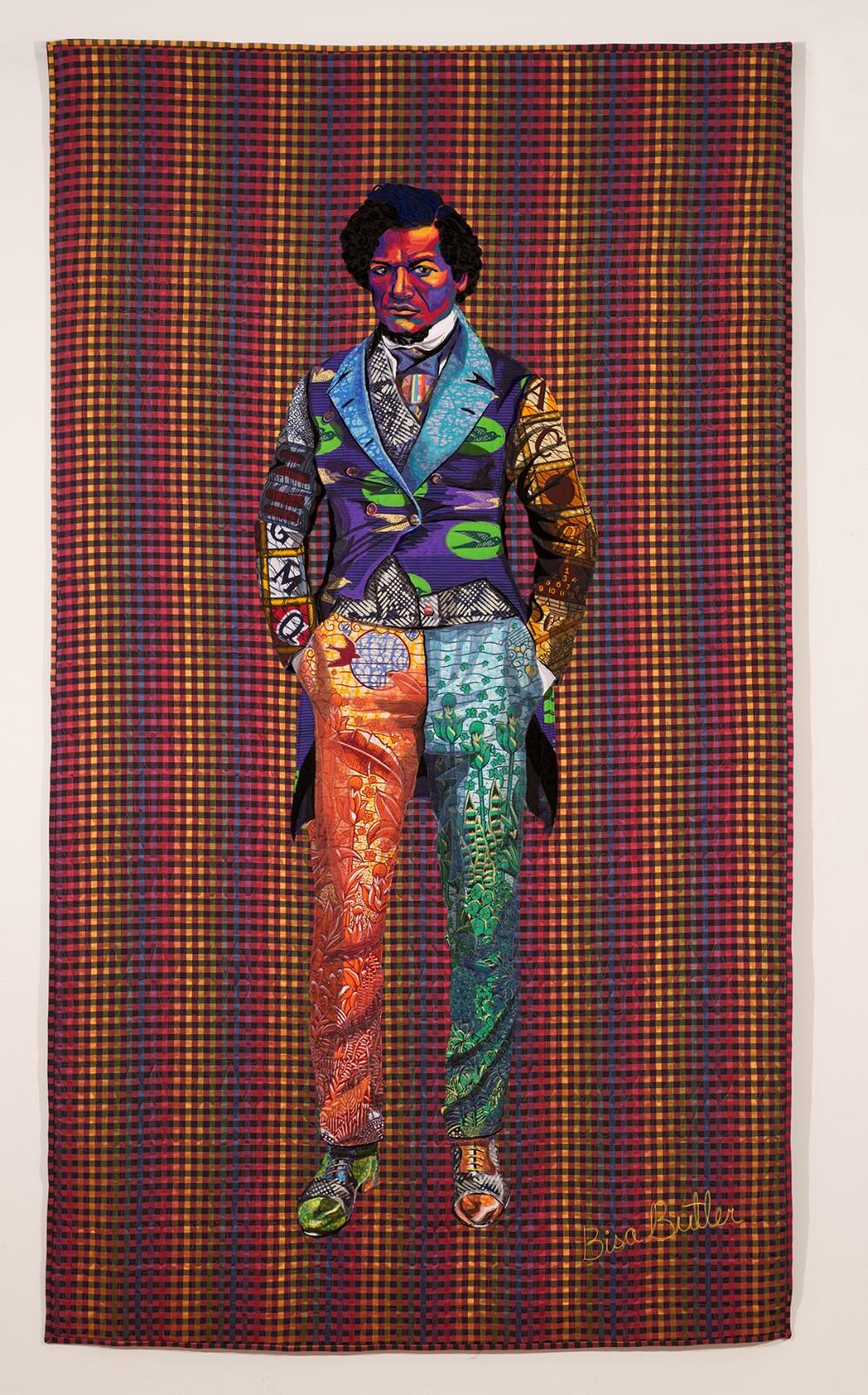 The title of Butler’s show was taken from a 4th of July speech in 1852 given by the famous African-American political leader Fredrick Douglass (1817-1895). Her portrait of Douglass is the only one in the show that is a faithful rendering of the person. Her other portraits, while inspired by historical black and white photographs, are amalgams of individuals, composite characters whose personalities explode through opulent fabrics and mind-blowing color. 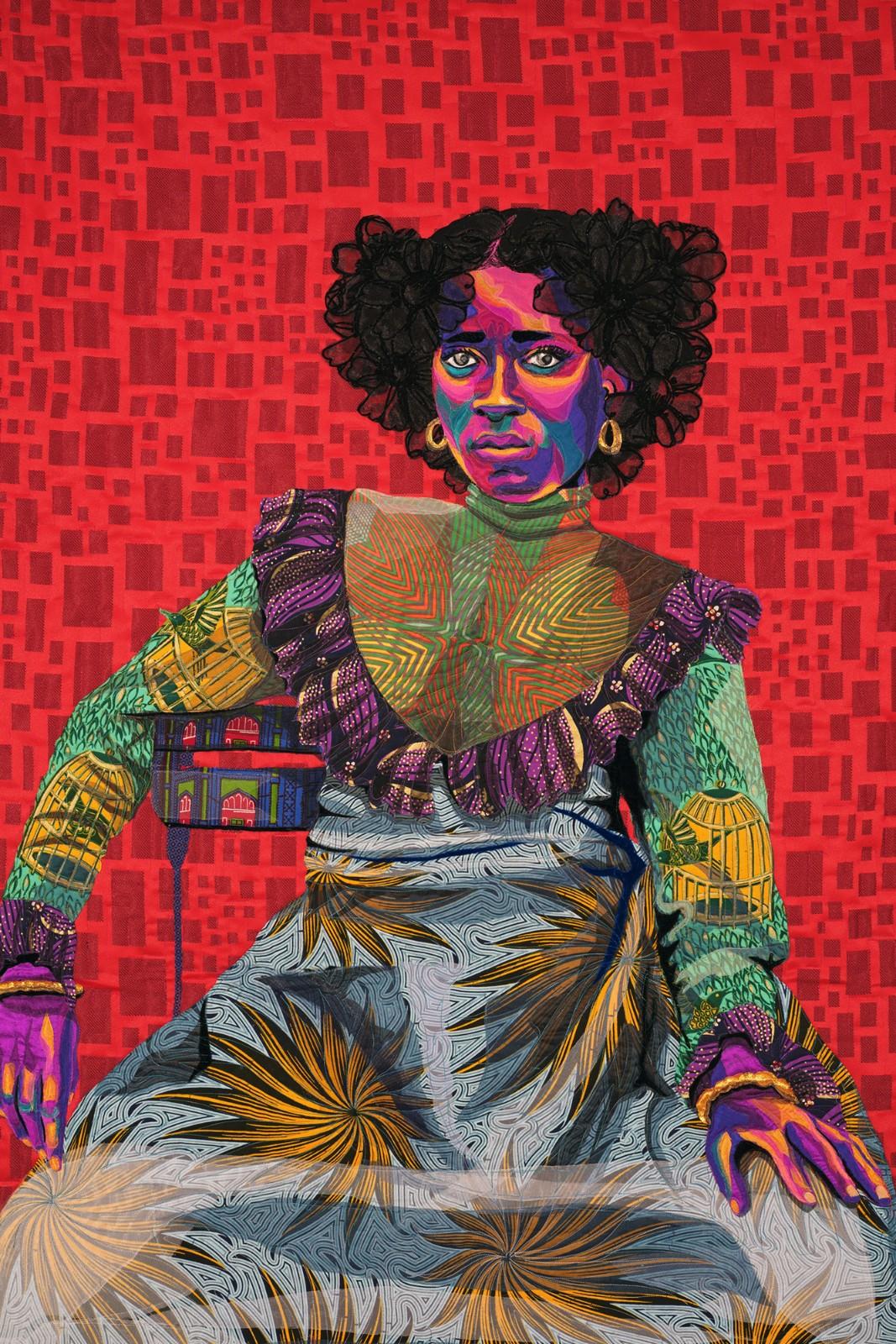 Calling Butler a quilt artist doesn't quite capture her mastery of this craft, once traditional women’s work, now considered fine art. Her formal art education at Howard University as a painter was influenced by Jacob Lawrence and Romare Bearden. Oil paint came into question upon the birth of her first child. Butler was concerned about the toxicity of her medium and she turned to fabric as a more desirable alternative. Her first quilted portrait was created in 2001, a homage to her grandmother. From that point on she turned to quilting fulltime.

Given that each intricately stitched piece takes over 1,000 hours, Butler is amazingly prolific. Two rooms in her home studio are dedicated to her artmaking. One room is full of the velvet, wool, silk, chiffon, and African wax-cast cotton prints that Butler collects. The fabric will be cut, pinned, appliqued by hand and stitched by machine in her production room. Some areas are built up in layers, creating almost a relief effect. Her subjects seem astoundingly alive, caught in a moment in time, somewhere between now and then, the then being a period in American history that has never before been seen in technicolor like this. 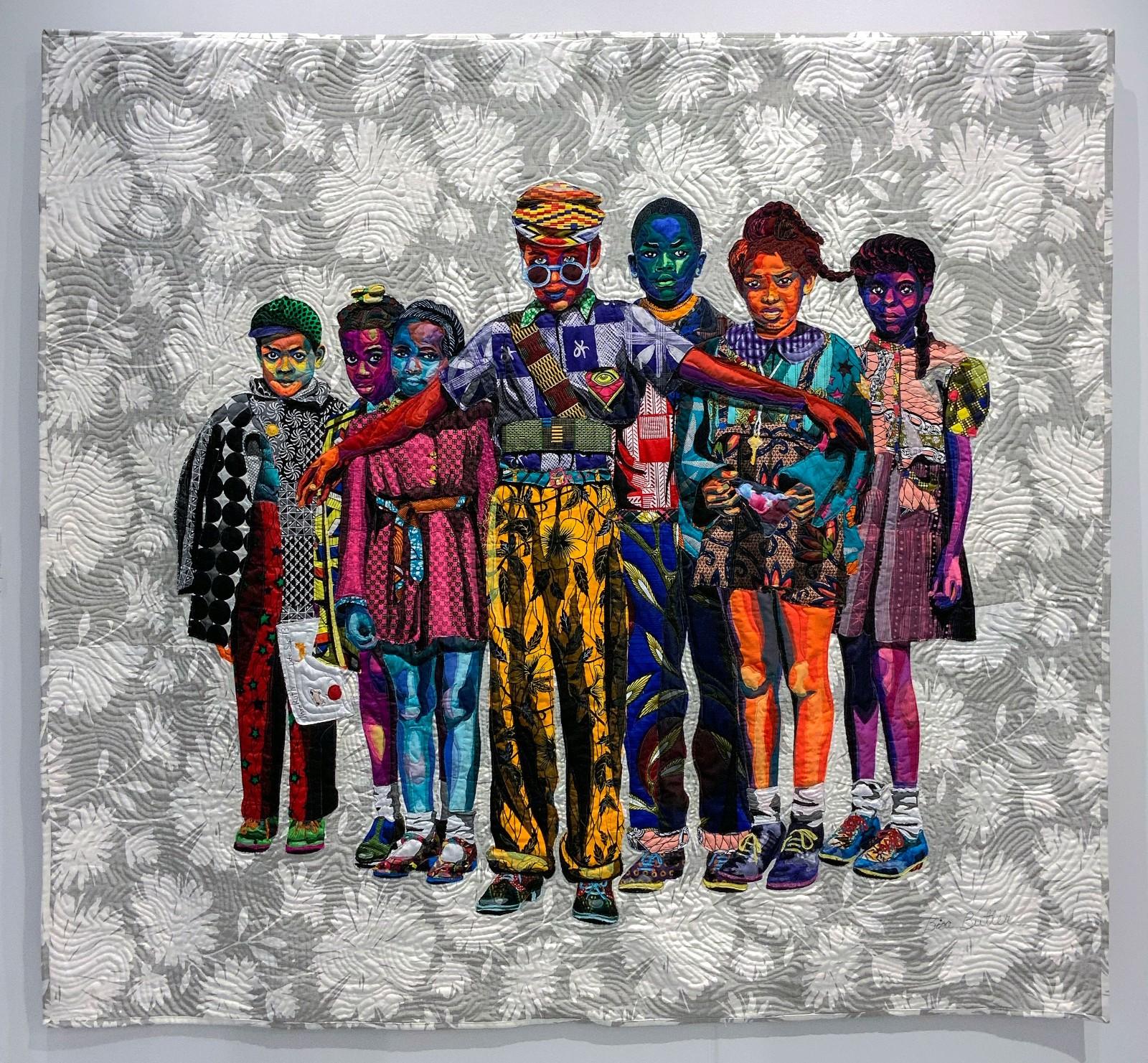 Men and women, young boys and girls, stare out at us as if to say, “I am here, and I am proud.” Butler reiterated, “I have never been drawn to artwork that provokes sympathy and makes you feel sorry for the subject.” Although we may be feeling some disappointment that her exhibitions have been curtailed, she is undaunted. “I’m working on a new piece for the Chicago show about The Great Migration. It will feature a negro family of eight, tentatively titled How We Got Here.” Bisa Butler’s joy in creating is infectious, as is her optimism about the future.