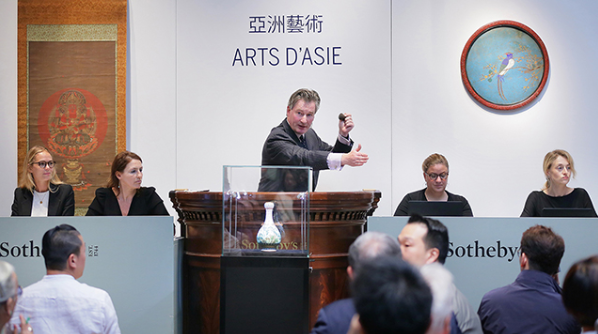 The vase sold at Sotheby's in Paris for $19 million.

Discovered by chance in the attic of French family home, this magnificent vase was brought into Sotheby’s Paris by its unsuspecting owners in a shoe box. When Sotheby’s specialist Olivier Valmier, opened the box to examine the vase, he was immediately struck by its quality. Further research revealed the vase to be a unique example produced by the finest craftsmen of the time for the Qianlong Emperor.

The vase is of exceptional rarity: the only known example of its kind, it was produced by the Jingdezhen workshops for the magnificent courts of the Qianlong Emperor (1735-1796). Famille Rose porcelains of the period (or ‘yangcai’ porcelains, as they are known) are extremely rare on the market, with most examples currently housed in the National Palace Museum in Taipei and other museums around the world.