The Premium Lots in the 88th Auction of Hermann Historica GmbH 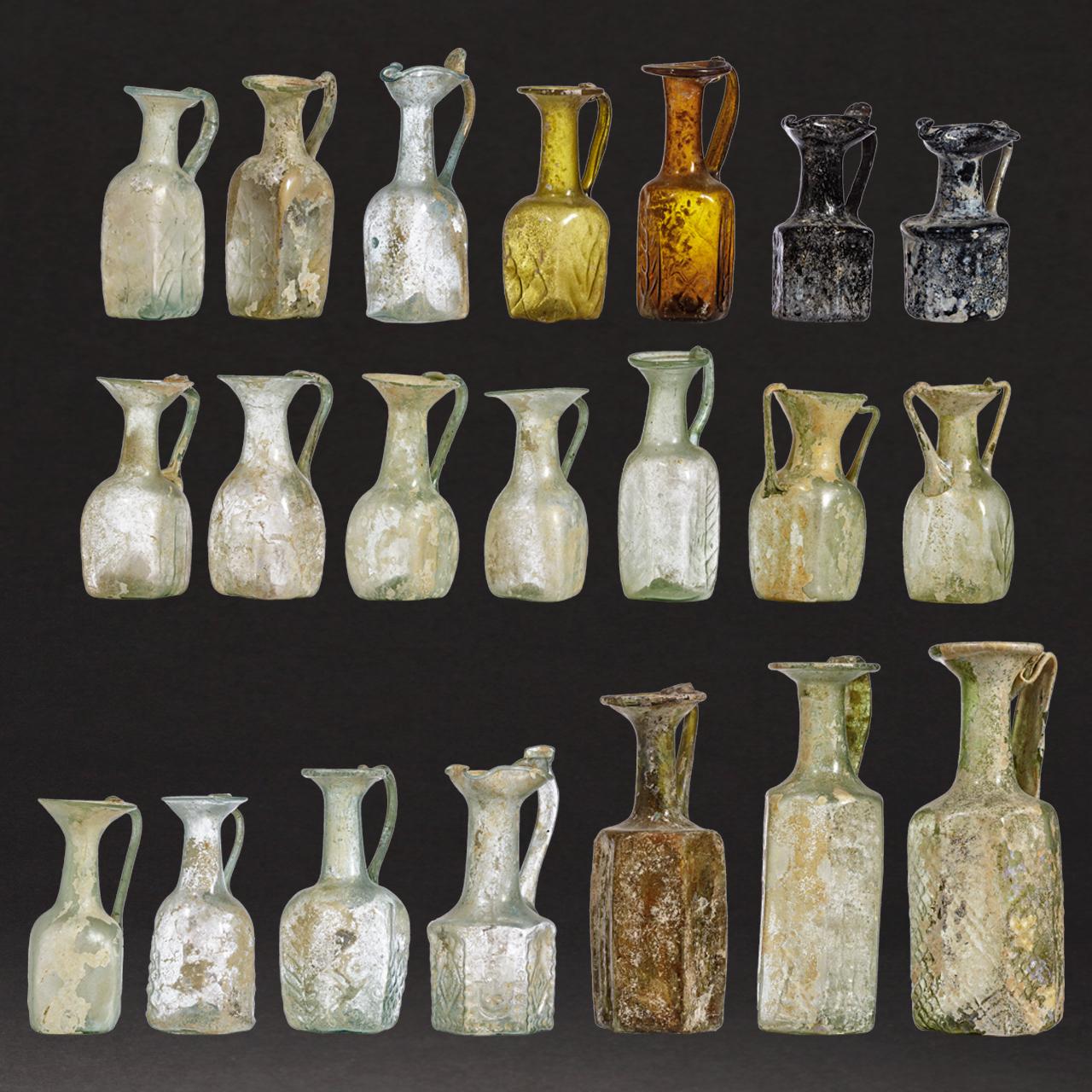 The online-only auctions that were introduced by Hermann Historica GmbH several years ago are becoming increasingly popular. Once again, some 4112 lots are coming under the hammer from June 21 - 25, including unparalleled, premium objects and pieces for first-time buyers.

As usual, the fantastic world of "Art and handcrafts, Antiquities" kicks off the auction week on June 21, 2021, this time with 887 lots from all periods and regions. First up, of museum quality and impressively intact, is a group of twenty-one late Roman and early Byzantine glass receptacles from Israel. Dating from the fourth to the seventh century, the square and hexagonal antique bottles, each with a handle and graphic ornaments on most side surfaces, are between 11 and 14 cm tall. The set now has a reserve of 15,000 euros. Originating in the same region, the colored, 1735 copperplate by Johann Daniel Herz (1693–1754) features scenes from the Passion of Christ against a capriccio view of the city of Jerusalem. Measuring 80 x 113 cm, the exceptionally large plate presents a fabulous, multi-figured tableau of history and landscape in meticulous detail, certain to captivate a new owner for 3,500 euros. Of considerably later date, the impressive sandstone sculpture of Guanyin is from much further east, carved in China during the twentieth century. Standing over one meter tall, her head is crowned with an opulent diadem, her gaze cast downwards in thought as she holds a vase in front of her body. Bids from 24,000 euros are now invited for this sculpture of the goddess of mercy and compassion. 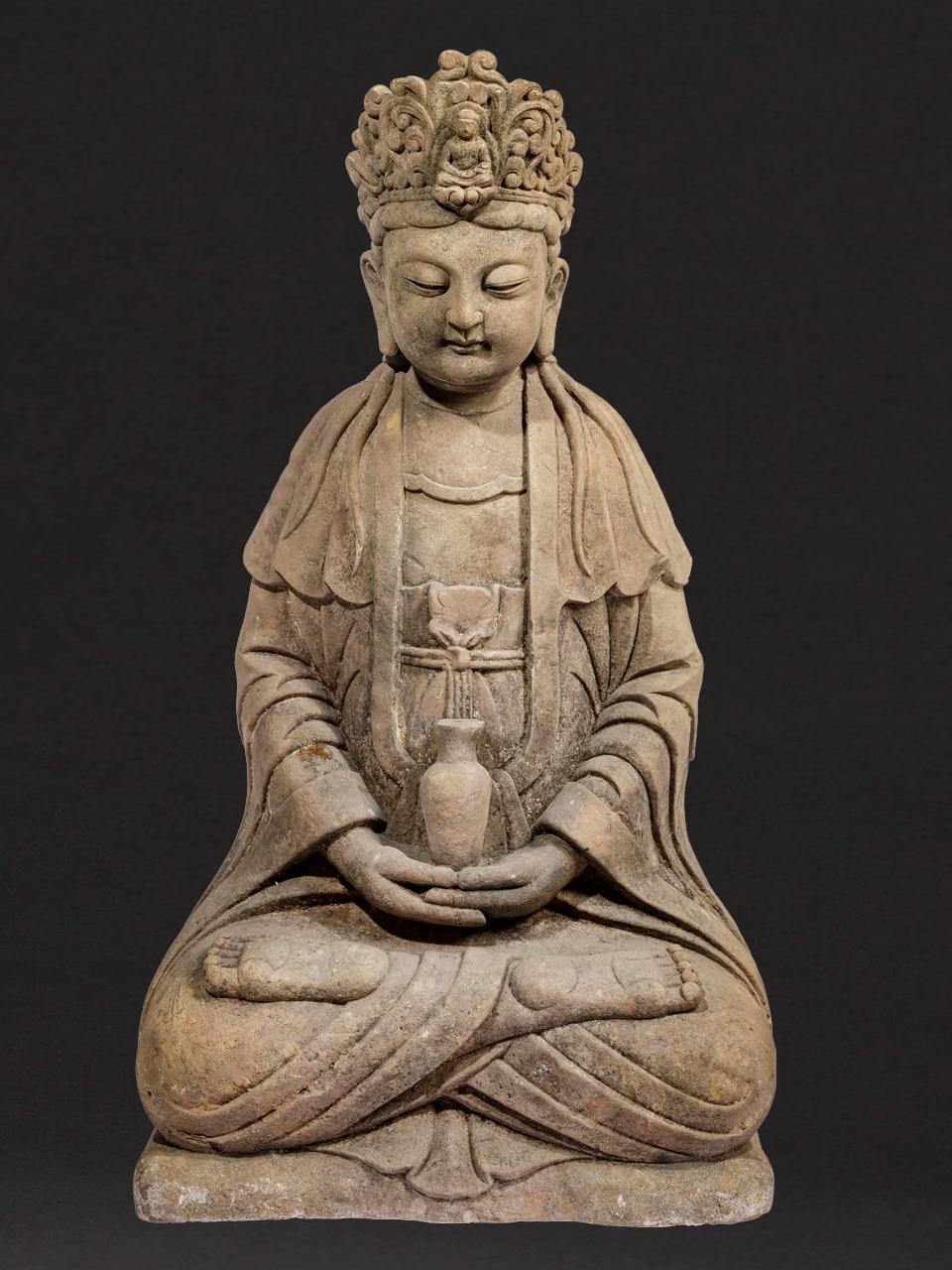 The second auction day is entirely dedicated to the 414 antique arms and armor. A large number of objects in the 88th Auction clearly show that emphasis was not just placed on the accouterments and protection of human combatants, but also on that of their mounts. Comparable pieces to an early ensemble comprising spurs, bridle, and stirrups from 1562, intricately crafted and partly open-worked in blackened wrought iron, can be found in prestigious public collections all over the world. Next up, starting at 5,000 euros, this German horse's muzzle will not disappoint. Also from Germany, this large Gothic, historicism era chamfron was elaborately forged in the style of circa 1480. Open to bids from 3,500 euros, the chamfron is sure to hold buyers in thrall with its appealing embellishment of turned flanges with finely fluted décor, striking escutcheon, and riveted ear protection. The magnificent edged weapons of the Ottoman Empire have long been a source of delight. This kilij is no exception, resplendent with gold inlays, silver plating, and lavish setting of corals and turquoises. Produced in Turkey during the nineteenth century, the saber with its typically shaped blade of Damascus steel is now expected to fetch 6,000 euros. 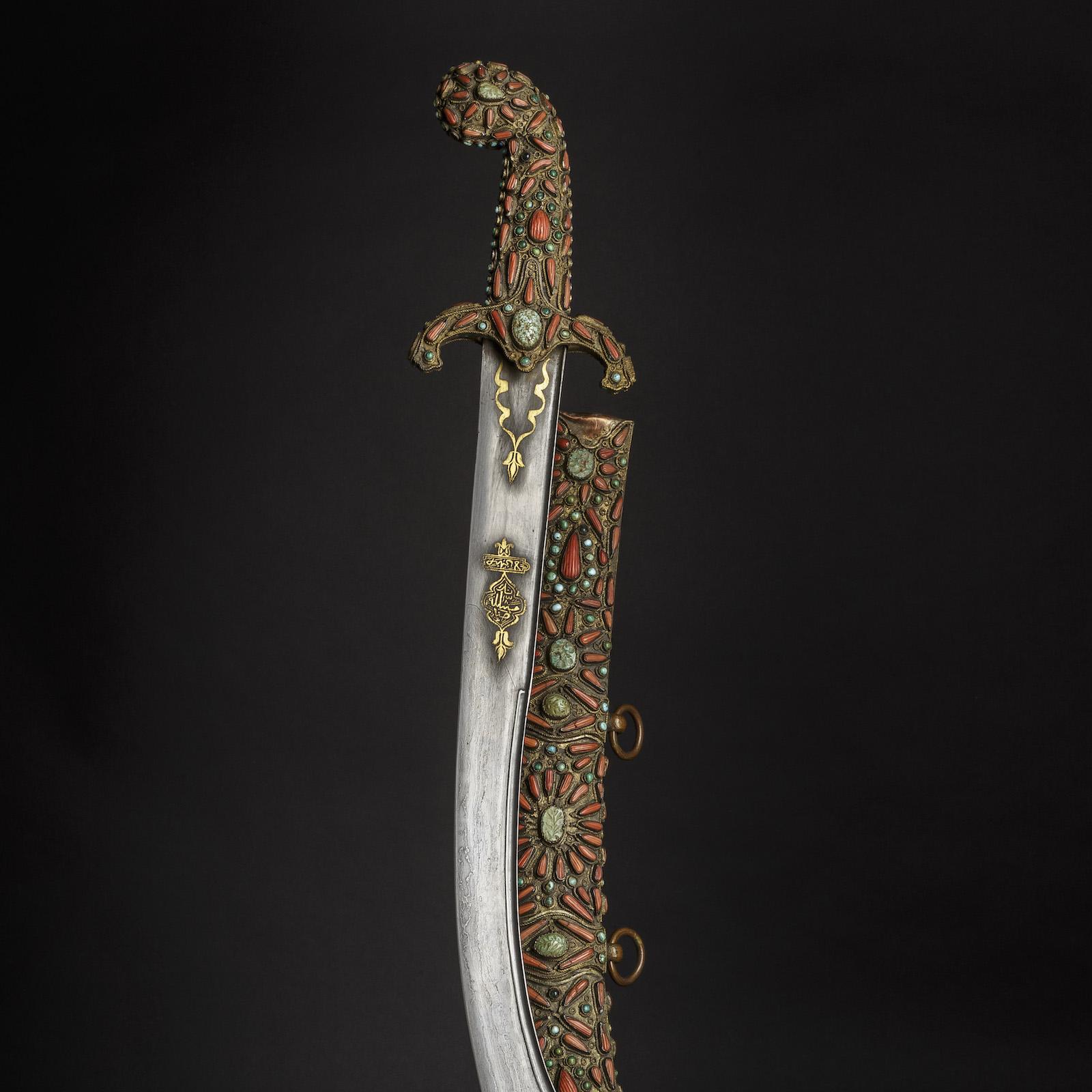 The selection of wheellock and flintlock weapons in "Five centuries of antique and modern firearms" is particularly outstanding, with 999 lots coming up for auction on June 23. The "Müllerbüchse" wheellock rifle, produced circa 1700 by Georg von der Fecht of Berlin (1675-1740) deserves special mention. In recognition of his superb skill, he was documented as "the crown prince's court gunsmith" from 1710 and even appointed court gunsmith to Friedrich Wilhelm I from 1713. Offers of 2,800 euros are now welcome for this early work. The gunmaker Durs Egg of London (1748-1831) enjoyed equally high regard during his lifetime, producing this flintlock pistol – here listed at 1,800 euros – towards the end of his career. Opulently designed with two gold band inlays at the breech, an engraved hare on the lock plate and floral, etched tendrils, the special feature of this weapon is the heavily darkened, iron flintlock. Valued at 1,600 euros, a pair of flintlock pistols, marked "LEROY A PARIS" and exquisitely adorned with fine, chiseled decoration, mascarons, and grotesque masks surrounded by leafy vines, are of considerably earlier date and were produced circa 1710-20.

The modern arms section showcases hunting weapons such as a Ferlach over-and-under rifle in 9.3x74R caliber, no. 40.3526, with a valid Ferlach proof mark, sure to coax an enthusiast into investing 3,400 euros. Or how about a Blaser R 93 bolt action rifle in .375 H&H caliber, no. 9/45468, moderately estimated at 2,300 euros? Meanwhile, bidding starts at 2,500 euros for a particularly early version of a classic Colt M 1911 pistol in .45 ACP caliber, serial number C 84064, which is an extremely rare find in this condition. 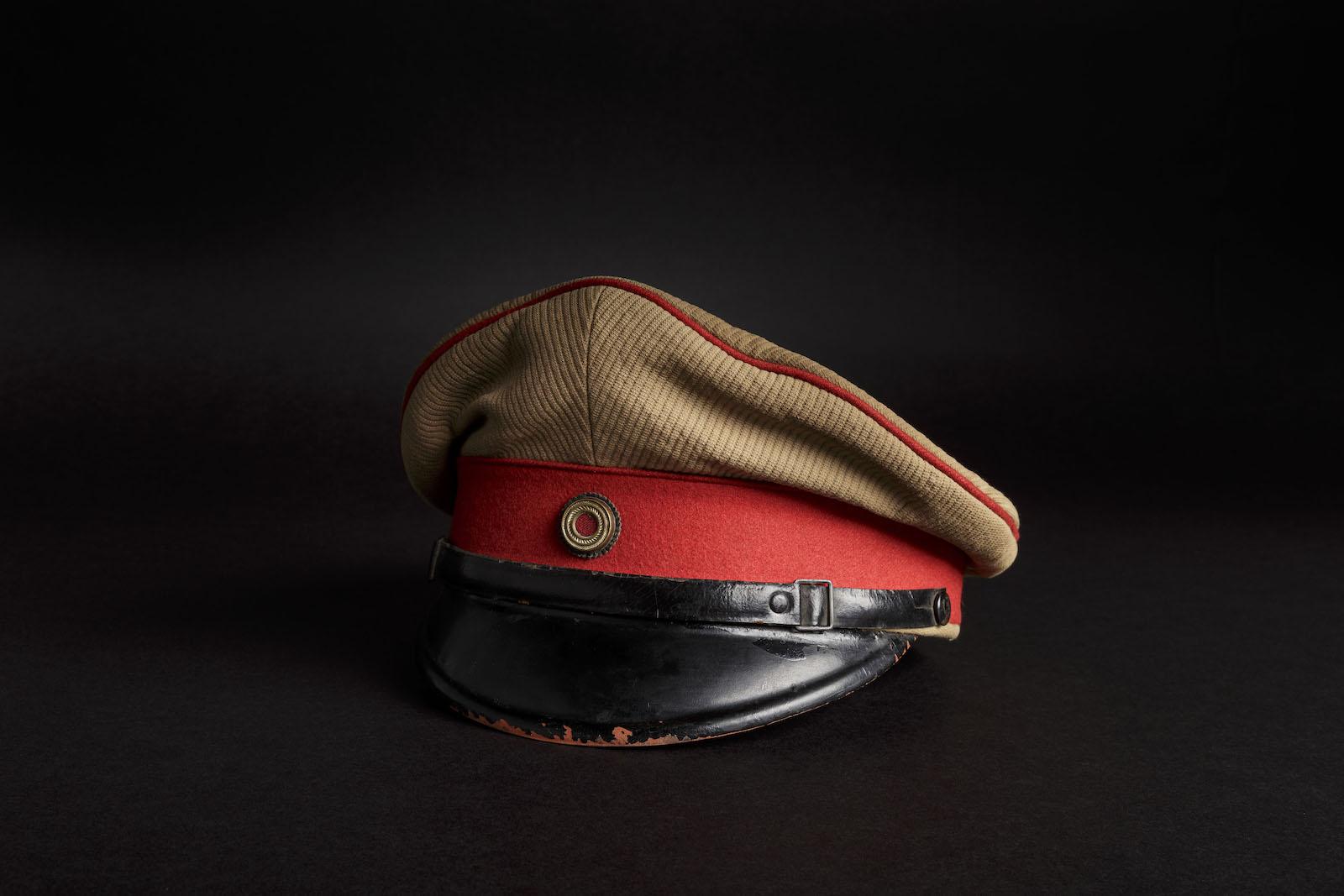 A visor cap to the tropical uniform for officers of the Protection Troop, circa 1900. Starting Price € 900.

International orders and military antiques are coming under the hammer on June 24. The 1452 lots include impeccable testaments to illustrious military careers, such as the gala costume worn by a Hungarian magnate during the second half of the nineteenth century. Elaborately fashioned in silk brocade, embroidered and embellished with silver gilt threads and cords, the robes were reserved for important, ceremonial occasions. These costumes are so rare that only a few are known to exist, on display in the world's most prestigious museums. Aficionados can now snap up this dolman and overskirt (mente) for 5,400 euros. No less remarkable are two types of headgear worn by soldiers in the protection forces, circa 1900. A visor cap in sand-colored corduroy from the tropical uniform issued to officers may be acquired for 900 euros, while a visor cap in khaki cloth for officers of the protection force in Cameroon and Togo has a limit of 800 euros. Lots from Russia and the Soviet Union were highly sought-after among the orders in recent auctions. Collectors will be thrilled to find rarities such as a badge from the First Kuban Campaign, or Ice March, of 1918. Made of silver, and complete with award number, it is now listed in the catalog at 1,200 euros.

After the auction of the military antiques section, there will be an opportunity to purchase an extremely comprehensive collection of twentieth-century steel helmets from every corner of the globe. Well over 500 helmets are to come under the hammer in 338 lots, with asking prices of between a few hundred to a moderate 1,200 euros. 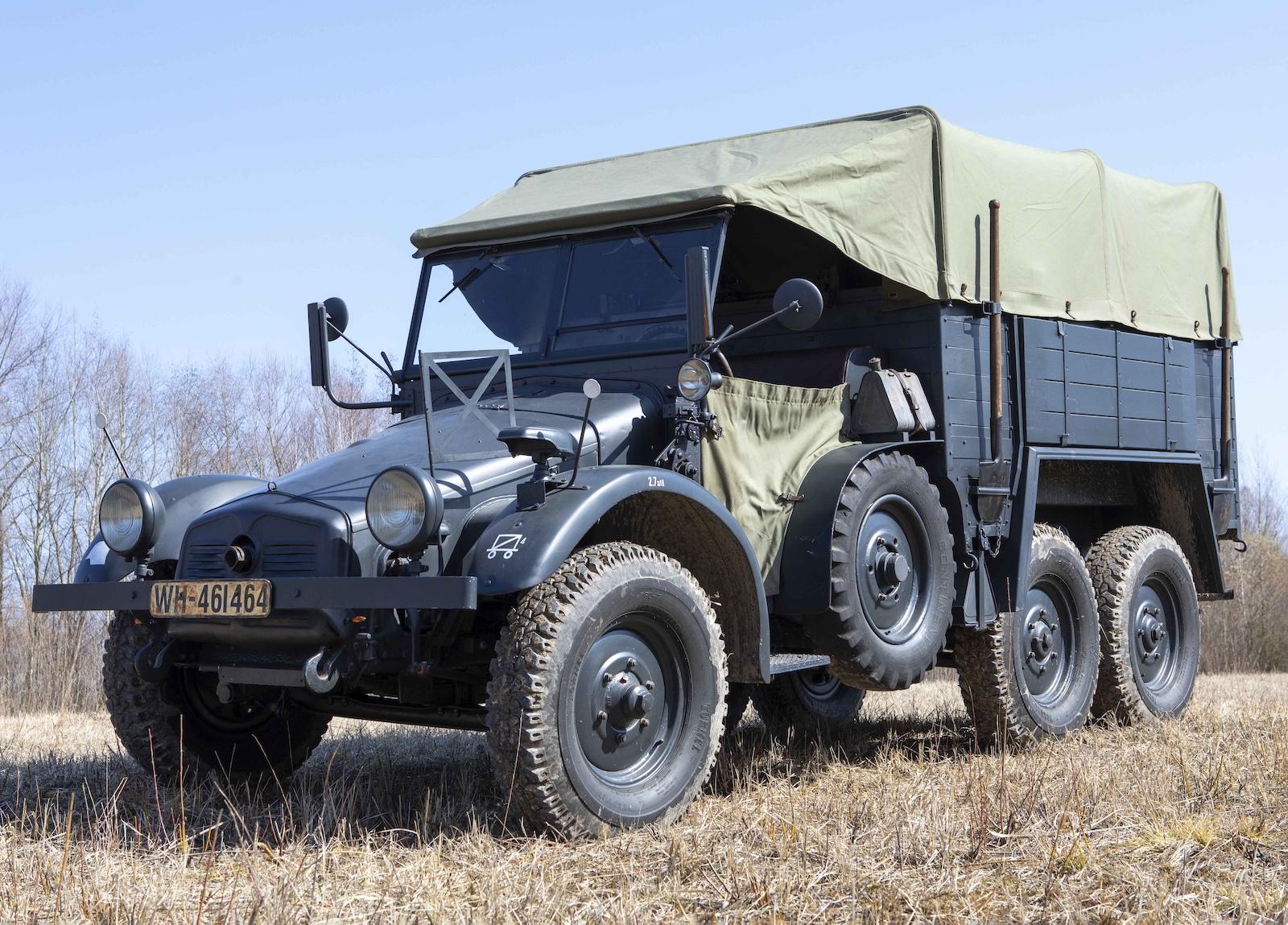 The grand finale of the auction week will be the unveiling of three very special—and sizeable—collector's items, SUVs "of a very different kind" as it were. The Krupp-Protze or Kfz 70 is an all-terrain, six-wheeled truck and artillery tractor with rear-wheel drive (6 x 4) that was designed as a personnel carrier. Manufactured in 1941, this particular vehicle is powered by a 3.5 l four-cylinder boxer engine (petrol), type Krupp M 304 in the 60 horsepower version, as built from 1936 to 1942. Restored to roadworthy condition, the truck is set to change hands for 145,000 euros. No less spectacular is the Horch 901 typ 40, a medium-weight, all-terrain universal Wehrmacht car with a powerful 3.5 L Horch V-8 engine. Now open to bids from just 125,000 euros, this vehicle has also been expertly refurbished; not just in running order, it comes complete with German registration papers and inspection certification, valid until May 2022. Bringing up the rear in our convoy is a self-propelled gun mounted on a Mercedes-Benz truck L3000 S, built-in 1939. The original 4.8 l four-cylinder, 75 hp in-line diesel engine matches the chassis number. This medium-sized, all-terrain, 3-t military truck features a closed steel interior at the front of the chassis, with a reconstructed flat bed at the rear for an imposing 2-cm Gustloff-Werke anti-aircraft gun, which, needless to say, has been deactivated in accordance with the applicable regulations. Fitted with extensive accessories, this service vehicle has been restored with enormous attention to detail and is now available for 95,000 euros.