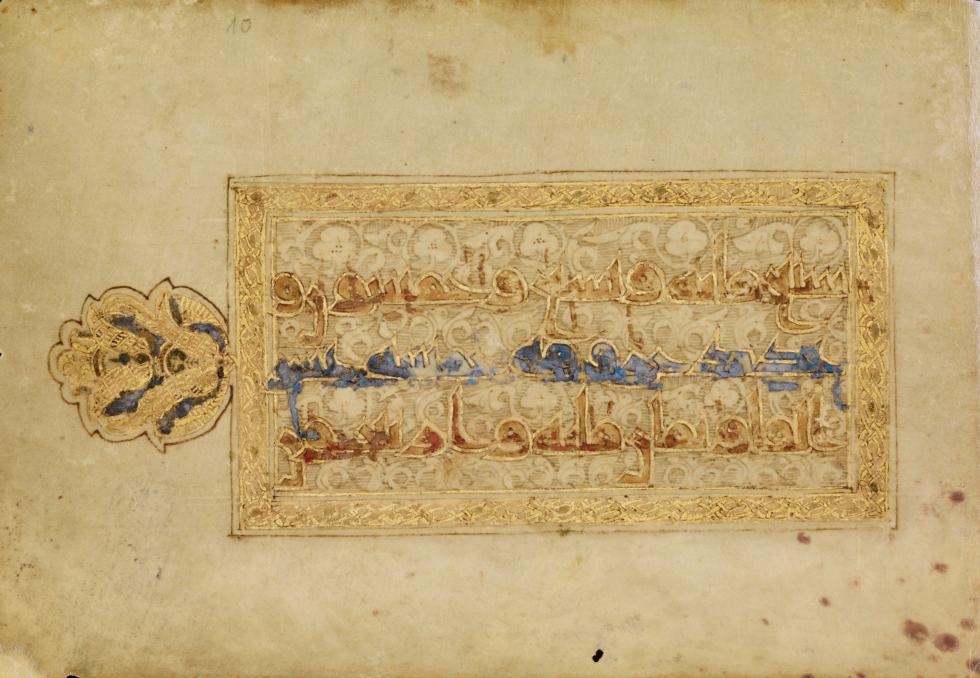 LOS ANGELES – The J. Paul Getty Museum recently announced the acquisition of the Rothschild Pentateuch, a manuscript of the first five books of the Hebrew Bible, known as the Torah. Its acquisition, coupled with works already in the Museum’s manuscripts collection, allows the Getty to represent the medieval art of illumination in sacred texts from the three Abrahamic religions—Judaism, Christianity, and Islam. Art of Three Faiths: A Torah, a Bible, and a Qur’an, on view August 7, 2018 through February 3, 2019, showcases three spectacular examples of each of these three: a Christian Bible and a Qur’an will be shown alongside the newly acquired Torah. 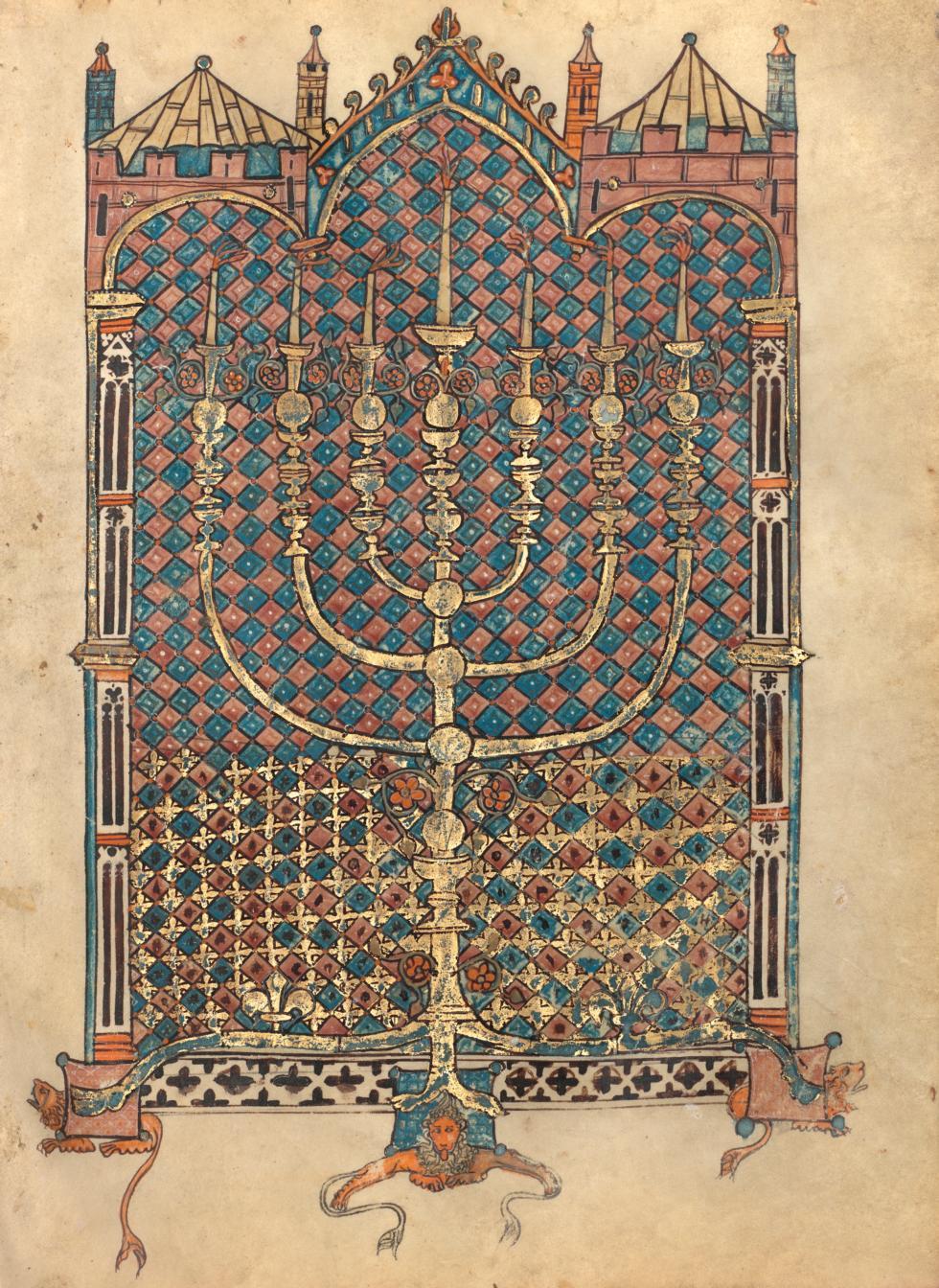 Menorah of the Tabernacle (Book of Leviticus) from the Rothschild Pentateuch, France and/or Germany, 1296

“This landmark acquisition fulfills one of the Museum’s longstanding goals of adding to our collection a Hebrew manuscript that can stand comparison in quality and importance to our finest illuminated manuscripts of other languages and faiths,” explains Timothy Potts, director of the J. Paul Getty Museum. “It has taken 35 years, but the Rothschild Pentateuch fills this gap more brilliantly than we could ever have imagined. An amazingly rare and beautiful object, richly illuminated with all manner of real and imaginary animals, it also broadens greatly the narratives we are able to tell about life, culture and religion in the Middle Ages. The acquisition will be a highlight of an upcoming exhibition that brings together – for the first time at the Getty – the sacred texts of the three Abrahamic religions, something that I am sure will deepen the experience of these works for many of our visitors, and be a rich subject of study for scholars.”

Judaism, Christianity, and Islam trace their belief in the singular God to a common patriarch, the figure of Abraham. The practitioners of all three religions have been called “people of the book” for their shared belief in the importance of the divine word, rendered in medieval manuscripts in glowing gold and luminous colors on parchment.

The Torah is the central sacred text of Judaism. In the strictest sense, the word refers to the Pentateuch, which contains the books of Moses: Genesis, Exodus, Leviticus, Numbers, and Deuteronomy. Illuminated copies of the Hebrew Bible in codex form, rather than Torah scrolls, began to appear in the mid-thirteenth century. In northern Europe, these manuscripts served the needs of members of the Ashkenazi Jewish community who had settled in the area along the Rhine River. Lavishly illustrated Hebrew manuscripts are exceedingly rare, since Jewish artisans were forbidden by law to join painting guilds. Hebrew manuscripts were often written by itinerant Jewish scribes and illuminated by local, sometimes Christian, artists. Illumination of the Hebrew Bible centers on the calligraphic forms of the letters, such as initials, word panels, or decorative frames around blocks of text.

”The three objects on display are exceptionally beautiful artworks that we hope will spark meaningful dialogue among various audiences,” said Elizabeth Morrison, senior curator of Manuscripts at the Getty Museum. “Museums offer more than simply an aesthetic experience. Through exhibitions such as this one, they foster a deeper understanding of history that helps us to reflect on our own shared experiences.” 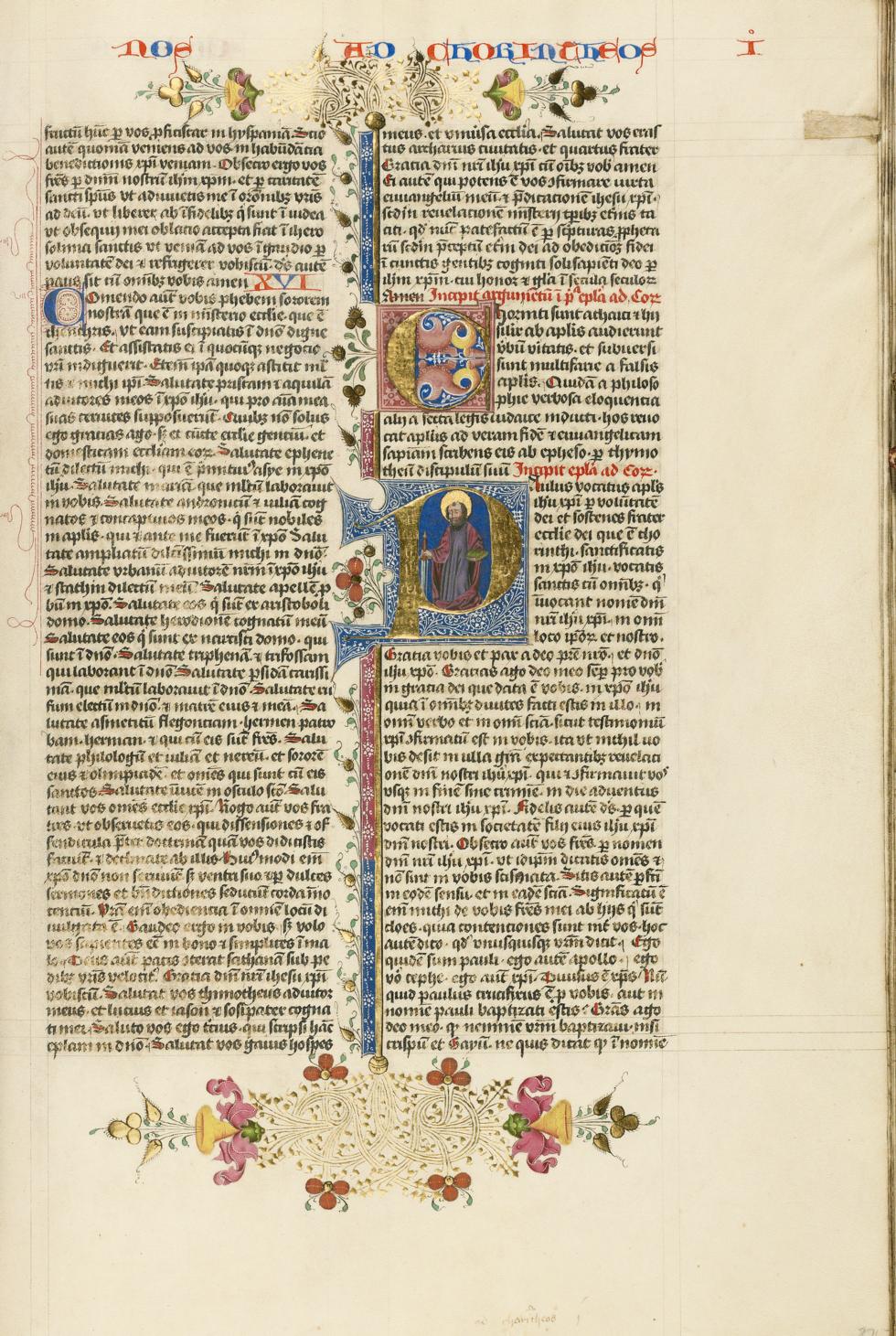 Among the earliest bound and illuminated codices from the Mediterranean world are copies of the Christian Bible written in Greek, Latin, Syriac, Ge’ez, Armenian, and other languages. The first part of the Christian Bible consists of texts from the Hebrew Bible, referred to since the second century by Christian writers as the Old Testament. Medieval Christians understood it not only as a historical document but also as a body of prophecy that specifically foretold the coming of Christ. The New Testament comprises accounts of Christ’s life, the Gospels, letters to churches or individuals from his disciples, such as apostles Peter and Paul, and a text about the end of time known as Apocalypse or Revelation. Illuminated Bibles—handwritten and printed alike—are among the most enduring forms of Christian book art produced during the Middle Ages.

The words that the angel Jibril (Gabriel) recited to the prophet Muhammad ibn Abdullah, about 560-632, formed the sacred text of the Qur’an. The opening line, “In the name of Allah, most gracious, most merciful,” a central tenet of Islam that expresses submission to the will of Allah, is repeated in almost every surah or chapter. Muslims transmitted scripture through oral tradition for the first few centuries, and later recorded it through beautiful and ornate calligraphy. Artists incorporated Quranic verses into books, textiles, coins, ceramics, and architecture, demonstrating reverence for the written word. Throughout the Middle Ages, the Islamic word spanned a vast territory, from the Iberian Peninsula to northern and coastal Africa, across the Mediterranean basin, and as far as Central and Eastern Asia.

Art of Three Faiths: A Torah, a Bible, and a Qur’an is curated by Kristen Collins, Bryan Keene, and Elizabeth Morrison, of the department of Manuscripts at the J. Paul Getty Museum. The exhibition will be on view August 7, 2018 through February 3, 2019.