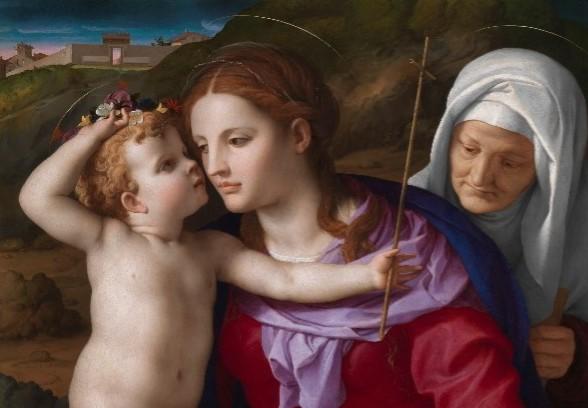 LOS ANGELES – The J. Paul Getty Museum announced the purchase of two extraordinary works of Italian art: a rare and beautifully preserved painting, Virgin and Child with Saint Elizabeth and Saint John the Baptist, by Agnolo Bronzino (1503-1572), the leading painter in Florence in the middle of the 16th century; and an extremely rare pair of marble sculptures, The Annunciation, (about 1333-34), by the Late Gothic sculptor Giovanni di Balduccio (about 1290-1339), both through private sale.

“Virgin and Child with Saint Elizabeth and Saint John the Baptist is an arrestingly beautiful work that counts among Bronzino’s most spectacular religious pictures,” said Timothy Potts, director of the Getty Museum, in announcing the acquisition. “The wonderfully sculptural portrayal of the Christ Child and the vibrant juxtaposition of bright colors in the drapery are typical of Bronzino’s meticulous style, qualities that made him the most sought-after painter of his generation in Florence. Recently rediscovered and published as a Bronzino in 2016, it is the single most important addition to our 16th-century paintings collection in three decades and a work that has never before been exhibited in a museum. It is a luminescent picture that is certain to become one of the most memorable in our collection.”

Mr. Potts continued, “The Annunciation, a masterpiece of Late Gothic sculpture by Giovanni di Balduccio, represents the most exciting recent discovery in 14th-century Italian sculpture. It shows the Virgin Mary at the moment she is informed by the Archangel Gabriel of Christ’s imminent birth. The delicate gestures of the figures and their stylized facial features lend an elegance to the emotional power of the realization that binds them at this epochal event. Exceptionally well preserved, these marbles will count among the most important Late Gothic sculptures in the United States and one of the greatest medieval treasures at the Getty, complementing perfectly our collections of illuminated manuscripts and 14th-century paintings.”

A plump baby boy plays with the crown of flowers on his head, his face turned tenderly toward his mother, who also embraces another child as his mother looks on, their halos glinting in the painting’s enamel-like surface. The infants are Jesus and Saint John the Baptist, with their mothers, the Virgin Mary and Elizabeth, depicted about 1540-45 in gleaming, lavish colors by Agnolo Bronzino, one of Italy’s greatest painters of the 16th century.

Virgin and Child with Saint Elizabeth and Saint John the Baptist is one of the most important recent re-discoveries of Bronzino’s oeuvre. It first appeared in a sale in Milan in 1898, attributed at that time to Andrea del Sarto, a contemporary of Bronzino’s teacher Pontormo. In 1964, the painting reappeared at a sale in London, where it was noted that it was signed by Bronzino on a stone in the lower-left corner of the composition. Since then the painting, which is just over 40 X 32 inches, has been in private collections; it was first fully published only in 2016. Another version of the same composition, also signed, is in the collection of the National Gallery, London. Bronzino is known to have created multiple versions of the same composition on several other occasions. Making slight changes and adjustments to the composition, he also recalibrated the luminosity to mimic various times of day, thus allowing the viewer to appreciate different tones and colors. To that end, the painting in London is set at night and the Getty’s work at dawn.

"Virgin and Child with Saint Elizabeth and Saint John the Baptist is an absolute masterpiece by one of the greatest Florentine painters of the High Renaissance, which has not been on public view for centuries,” says Davide Gasparotto, senior curator of paintings at the Getty Museum. “The painting represents Bronzino at the height of his powers. With its controlled line, gleaming marmoreal forms, enamel-like surface, and lavish use of expensive pigments, it is an opulent, precious object, meant not only to elicit devotion but also admiration for its virtuoso quality of execution.”

Angnolo di Cosimo di Mariano Tori, known as Bronzino (Florence, 1503-1572), was the most accomplished Italian painter to embody the ideals of the Maniera, the grand style of the 16th century, influenced by Michelangelo and the rediscovery of antique sculpture. The most successful pupil of Pontormo, Bronzino became court artist to Cosimo I de’ Medici, Grand Duke of Tuscany, and his refined style had an enormous impact on Florentine painting of the time.

Hugely admired, his portraits and easel paintings with religious subjects and mythological scenes epitomize the grace and sophistication of the High Renaissance style.

Virgin and Child with Saint Elizabeth and Saint John the Baptist is now on view at the Getty Museum, Getty Center. 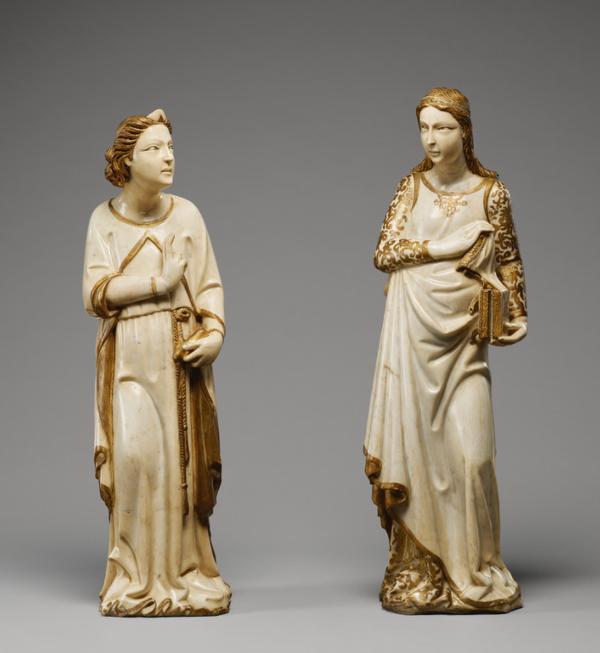 Giovanni di Balduccio, The Annunciation, about 1333-34.

The Annunciation is a pair of finely carved marble sculptures depicting the moment that the archangel Gabriel announces to Mary at Nazareth that she will become the mother of Jesus. The separate figures are carved in the round in highly polished white marble, highlighted with gilded decoration, especially on the draperies. Gabriel is slightly smaller than the Virgin and looks at her, his head turned slightly to his left, his right knee bent underneath his tunic. The locks of his hair and the folds of his tunic flow backward, evoking his sudden arrival. Mary, seemingly surprised, returns his gaze, her head slightly turned toward her right. She rests on her right leg, bending the left knee, while she gathers the tail of her long cloak.

In 2005, the approximately 30-inch tall sculptures were identified as the largest sculptural elements preserved from a chapel erected in the now-lost papal fortress in Bologna, the Rocca di Porta Galliera. This chapel, commissioned for Pope John XXII in the early 1330s, was decorated with marble sculptures carved by Giovanni di Balduccio and frescoes (now lost) and an altarpiece both painted by Giotto. The chapel was destroyed shortly after the Papal Legate was expelled from the city in March 1334, and its artworks were dispersed.

“These are stupendous sculptures of the highest quality created by one of the most important Italian Gothic sculptors for a prestigious papal chapel,” explains Anne-Lise Desmas, senior curator of sculpture and decorative arts at the Getty Museum. “This well-documented and exceptionally preserved work of art by a major master of the Trecento [14th century] will stand out in our collection of Medieval sculpture for its ambitious composition, elegant figures, and refined carving.”

Giovanni di Balduccio (Italian, active about 1317-1349) was one of the greatest Gothic Italian sculptors of the first half of the Trecento, active in Pisa, Florence, Bologna, and Milan. The Annunciation is the first work by the artist to enter the Getty Museum’s collection; the only other work by him in an American collection is a Virgin and Child—also made for the same Bolognese chapel—now in the Detroit Institute of Arts.