Coyote Leaves the Res: The Art of Harry Fonseca 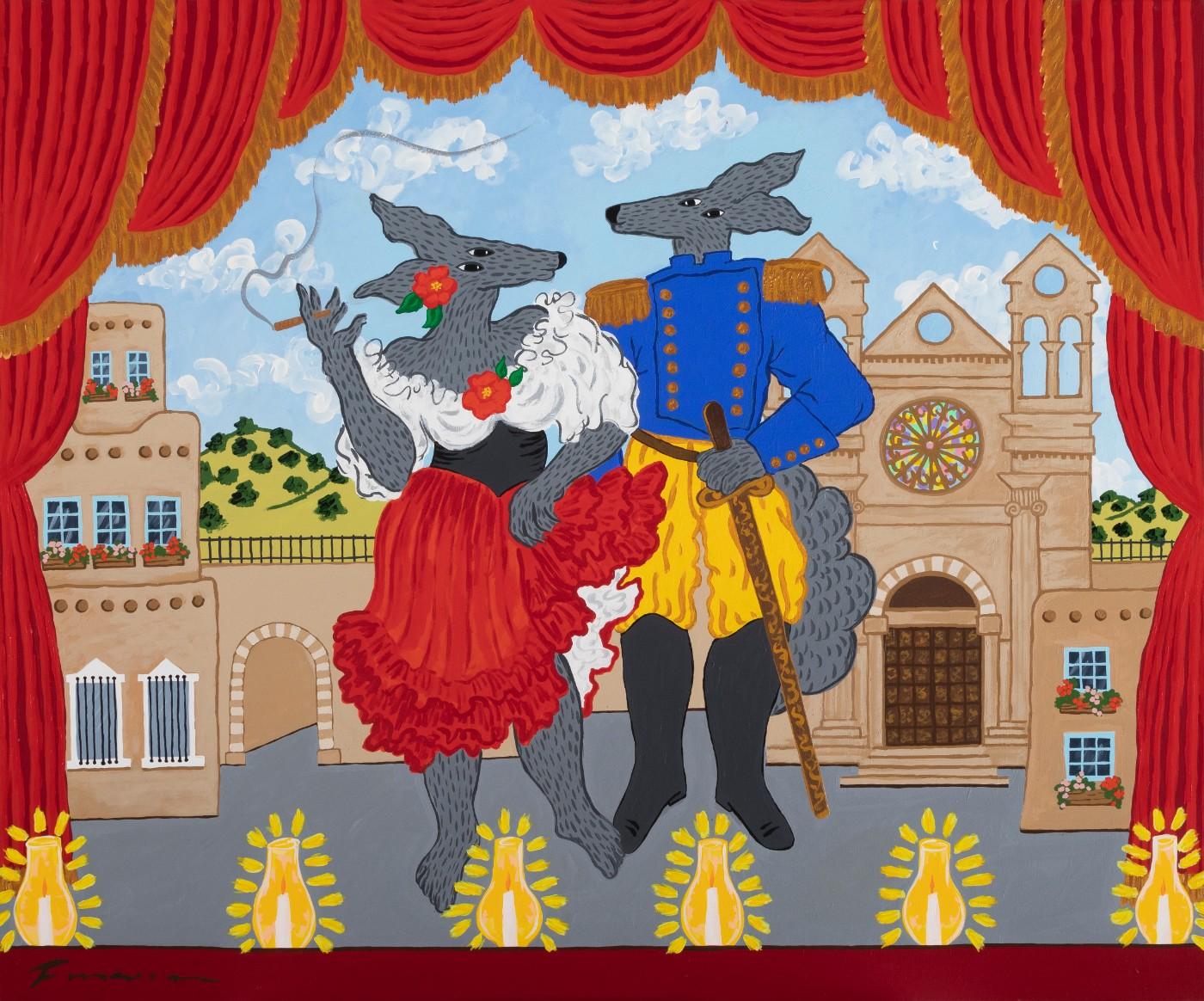 Los Angeles, CA — The Autry Museum of the American West presents its debut solo exhibition drawn from its acquisition of the estate of renowned artist Harry Fonseca (Nisenan Maidu, Hawaiian, Portuguese, 1946–2006). Coyote Leaves the Res: The Art of Harry Fonseca features 60 of Fonseca’s works, including paintings, sketches, and lithographs, and will be on view from May 19, 2019, to January 5, 2020, at the Autry in Griffith Park. The exhibition runs concurrently with Indian Country: The Art of David Bradley; together, these two major shows represent the Autry’s substantive exploration of contemporary art from Native America. 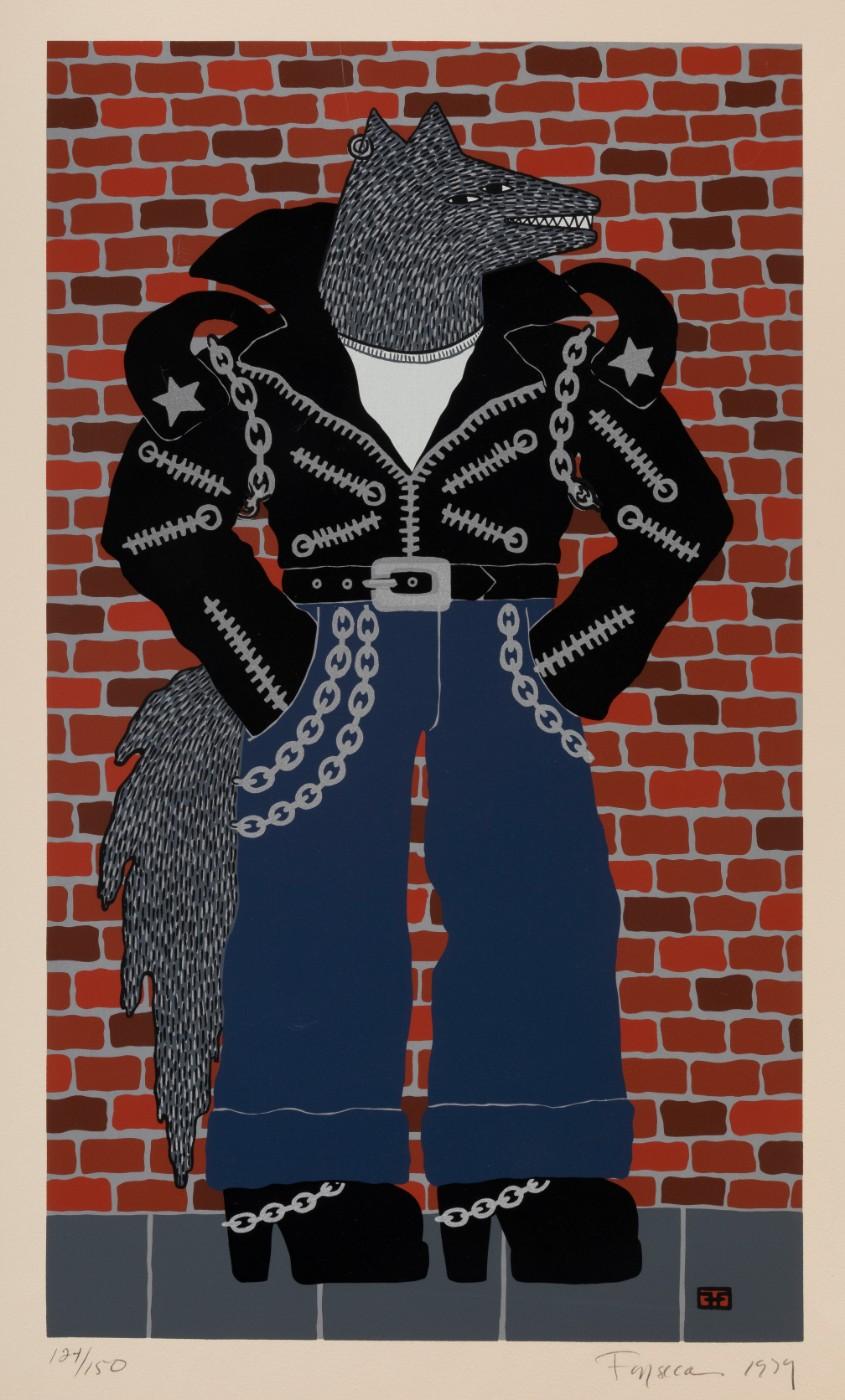 Harry Fonseca, Untitled (Coyote in the Mission), circa 1979. Lithograph.

Fonseca is best-known for his depiction of Coyote, the colorful trickster who leaves the “res” (reservation) and re-appears in a variety of non-traditional settings. The Art of Harry Fonseca focuses on Coyote’s role as an avatar for the artist and a metaphor for exploring his creative, artistic, and ethnic identity within the context of the contemporary world.  As a gay man and a person of mixed heritage, Fonseca used his art as a vehicle for self-discovery—a means of navigating different aspects of his life and identity during a time when ideas about Native peoples were often driven by outside forces, including commercial markets, tourism, and historical clichés.

Acquired by the Autry in 2016, the collection from which the exhibition draws includes over 500 original works of art by Fonseca as well as his personal archive of journals, papers, and sketchbooks, most of which have never been exhibited, researched, or published. With his trademark blend of traditional imagery, contemporary experience, and vibrant color and form, Fonseca expanded the definition of American Indian art and shattered expectations and stereotypes that had long confined it.

“Fonseca’s great contribution was in bumping up against and crossing confines that were never previously engaged. His work spoke both internally, to Native Americans, as well as externally, with those outside the ‘res,’ and nimbly traversed artistic and cultural boundaries with ideas about Indianness,” said W. Richard West, Jr. (Southern Cheyenne), the Autry’s President and CEO. “It was Harry who got us past this unidimensional view of what Indianness is. Our museum’s mission to share the diverse stories of the American West guided us in our landmark acquisition of the Harry Fonseca estate, and now in presenting the story of his Coyote.”

Born in Sacramento, California in 1946, Harry Fonseca was an artist from an early age. He was greatly influenced by his uncle, Henry Azbill, a Konkow Maidu elder and a cultural protector of Maidu culture. While a fine arts student at California State University, Sacramento, Fonseca recorded his uncle telling the Maidu creation story. During this period, he became increasingly involved with the Native community, including as a traditional dancer. These connections were strengthened through his lifelong friendship with fellow artist Frank LaPena (Wintu-Nomtipom/Tenai), and throughout his career he would draw from the rich visual culture of his Maidu heritage, including basket designs, traditional dances, and regalia.

In 1977, he painted Creation Story, which was based on the stories he heard from his uncle. Much of his subsequent work invoked petroglyphic symbols, as he sought new ways to connect to tradition. His oeuvre is deeply rooted in the experience of the Native world, including a series on the genocide of Native people in California that occurred with the rise of the mission system and the discovery of gold in California.“Harry Fonseca’s work is disarmingly personal, which contributes to its power and impact,” said Amy Scott, the Autry's Executive Vice President of Research and Interpretation, Marilyn B. and Calvin B. Gross Curator of Visual Arts, and curator of the exhibition. “With Coyote as his sly stand in, Fonseca offers observations and insights about his experience as a Native artist and a gay man who found joy in all things creative, in ways that continue to reach broad audiences.”

The exhibition is organized into four sections. A brief Introduction gives an overview of the artist, as does Fonseca and the Self, which speaks to the role of art in exploring both personal identity and experience.  The third and major section, Coyote Leaves the Res, takes an extended look at some of the many roles that Coyote embraces, and his ability to defy boundaries and defy expectations. Via Coyote, Fonseca also explored his own artistic interests, which included modernism and European artists such as Henri Matisse. As Coyote leaves the “res,” Fonseca comments on contemporary society with a reflective, at times satirical take on the difficult histories and popular clichés against which Native people struggle. This section features the artist’s exploration of his sexuality and features Coyote Leaves the Res. (Red Wall) (1994), one of several iconic images of Coyote clad in a black leather motorcycle jacket and high-top sneakers. This section also includes Coyote as “Rose,” his female counterpart. Like Coyote, Rose is colorful and vivacious, a capable co-star in various performances including the opera and the tango. 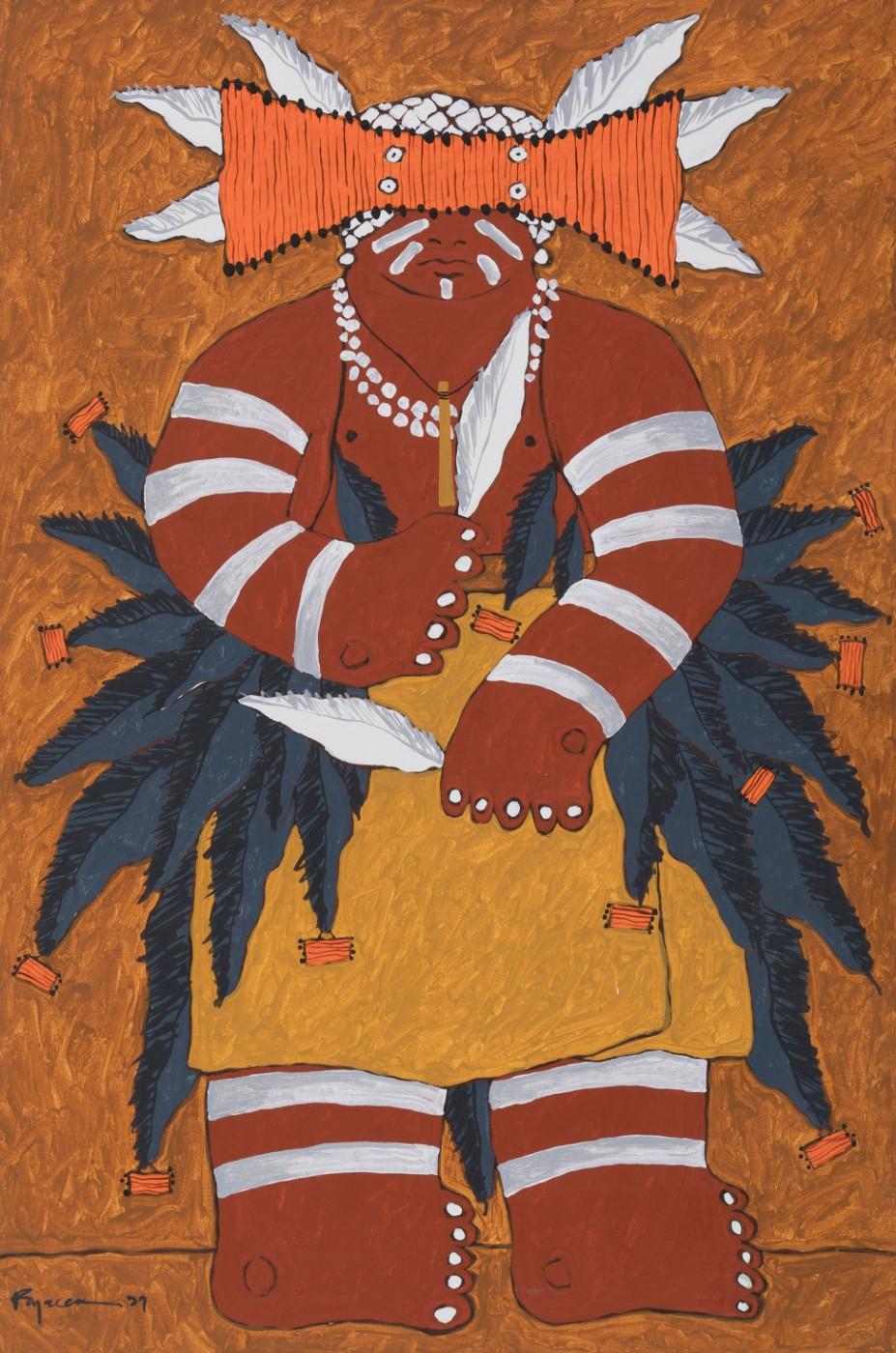 The fourth section, St. Francis and the Fantastic, explores other figures that Fonseca gravitated toward, such as St. Francis, the mythological Icarus, and Ishi, the last member of the Yahi tribe, each of whom defied expectations to cross from one world into another. Through the figure of St. Francis, Fonseca explored his thoughts on the devastating impact of the mission system (established by Franciscan priests in the late eighteenth century) on California’s Native population. This section includes many pieces from his Discovery of Gold and Souls in California series, which was born out of an early 1990s trip to Sacramento to research the history of the Maidu peoples. The series examines the physical, emotional, and spiritual devastation wrought by the combined forces of Christianity, empire, and greed over two centuries of California history. Shown against alternating backgrounds of black and gold, these paintings feature crosses obscured with red paint, a reference to Native blood spilled in the quest for God and gold.

Fonseca died in December 2006, six months after being diagnosed with a malignant brain tumor. Today he remains “Saint Harry” to many of his fellow artists, a larger-than-life figure whose artistic significance was matched only by his generosity of spirit.

About the Autry Museum of the American West
The Autry is a museum dedicated to exploring and sharing the stories, experiences, and perceptions of the diverse peoples of the American West, connecting the past to the present to inspire our shared future. The museum presents a wide range of exhibitions and public programs—including lectures, film, theatre, festivals, family events, and music—and performs scholarship, research, and educational outreach. The Autry’s collection of more than 500,000 pieces of art and artifacts includes the Southwest Museum of the American Indian Collection, one of the largest and most significant in the United States. Visit TheAutry.org for more information.