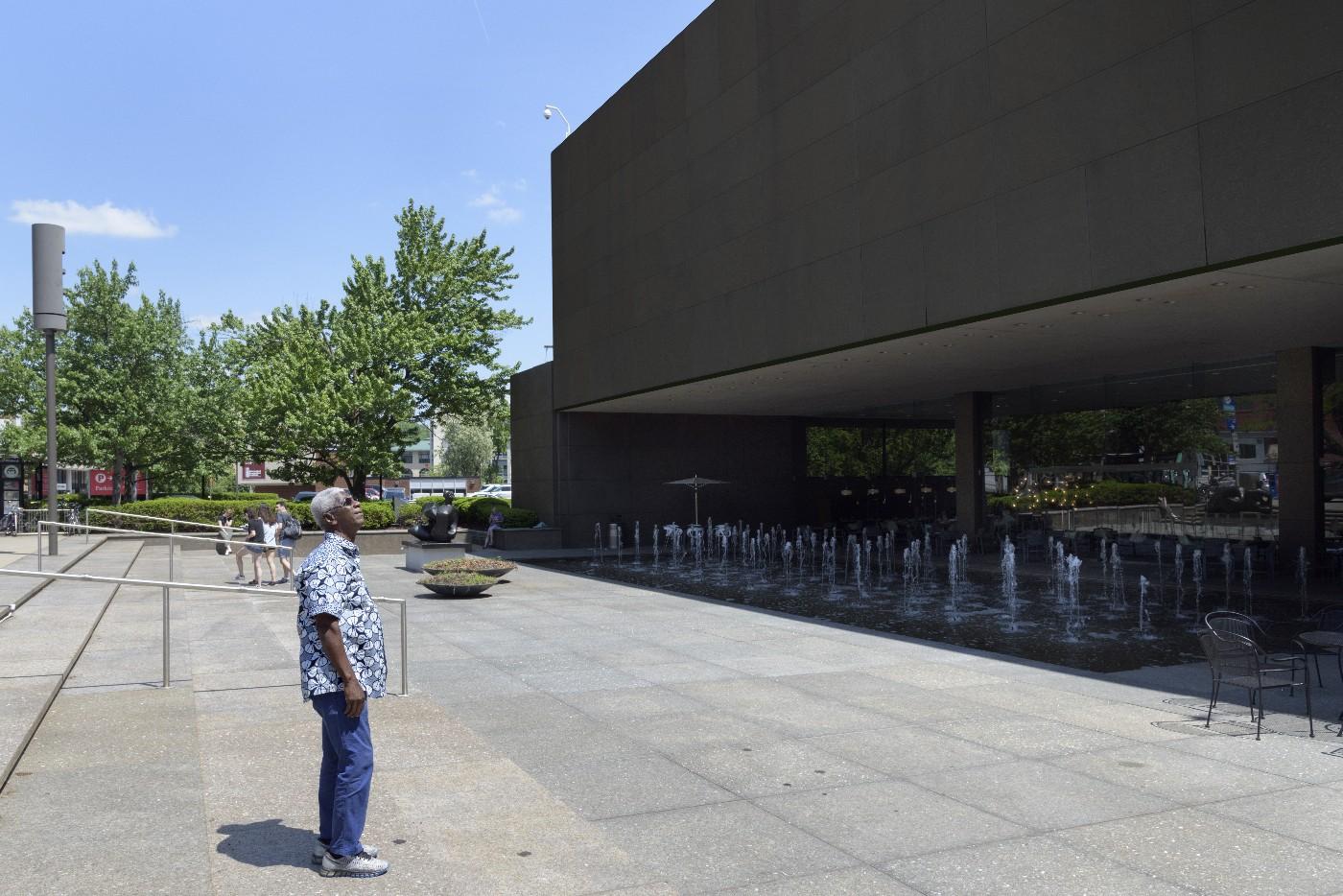 Pittsburgh, PA- Not only will the halls and rooms of Carnegie Museum of Art (CMOA) overflow with sculpture, photography, painting, and installation when Carnegie International, 57th Edition, 2018 opens on October 13, the facade of the building will be transformed by art as well. Two monumental outdoor works will attract passers-by and invite visitors into the museum, where arresting projects will greet them just within the museum doors. We are pleased to preview these four works which—in their exceptional use of scale, texture, color, and sound—anticipate the range and depth of the work further in.

El Anatsui
The immense works of Ghanaian artist El Anatsui have shimmered and rippled over buildings and parks the world over. His piece for the International will span the museum’s 30 by 160-foot facade, transforming the way visitors see the building. This work moves from a reflective expanse to an undulating palisade of folded printing plates, to one of the artist’s signature sheets of wired-together liquor bottle tops. Rich in hue and historic association, Anatsui’s materials create space around the Richard Serra sculpture on the museum’s plaza. Connecting old and new, color and light, Africa and America, this work also has a local connection: the printing plates are sourced from Pittsburgh’s Knepper Press. In addition, the piece is being fabricated by sculptor Dee Briggs in her converted firehouse studio in Wilkinsburg with a crew of her neighbors working around the clock toward installation day.

Tavares Strachan
Tavares Strachan’s art gives body to the unseen. His new project Encyclopedia of Invisibility continues his ongoing project to catalogue people and things left out of official records and canons: a slave artist, a Catalan insurrectionist, the first woman admitted to Florence’s Academia di Arte del Disegno. Increasingly drawn into the orbit of science, Strachan has launched blown-glass rockets fueled by sugarcane into space and is the first artist-in-residence at Seattle’s Allen Institute for research. For his contribution to the International, the Bahamian artist is making a work for the museum’s facade that responds to the museum’s history. Grand in scope and daring in design, the project will be brought to light at the International’s opening in an electrifying moment of connection, affirmation, and radiance.

Mimi Cherono Ng’ok
The images created by the peripatetic photographer Mimi Cherono Ng’ok arise from her travels around the world: Abidjan, Accra, Berlin, Dakar, Johannesburg, Kampala, Kigali, Nairobi. Cherono Ng’ok describes her project as an “emotional cartography,” and her haunting, often colorful photographs explore the space between memory and imagination. For the International she will pair her iconic portrait of a white horse—in a decorative red halter, on a beach—with another image, still to be determined. Printed on wallpaper and installed in the museum’s lobby, this billboard-sized work will draw viewers into the International, while a third photograph—printed on the back of the exhibition map—will go with them when they leave.

Park McArthur
Visitors entering the International from the courtyard will immediately be immersed in sound—the sound, in fact, of the museum itself. New York-based artist Park McArthur has been tracking down the origins of CMOA’s very stones, which are Larvikite—Norwegian rock valued for its pearlescent luster. McArthur dispatched a sound engineer to the Larvik quarry to record the ambient sounds of the site of extraction. She is shaping those sounds into an artwork that will envelop visitors as they arrive.

Carnegie Museum of Art creates experiences that connect people to art, ideas, and one another.
We believe creativity is a defining human characteristic to which everyone should have access. CMOA collects, preserves, and presents artworks from around the world to inspire, sustain, and provoke discussion, and to engage and reflect multiple audiences.

Our world-class collection of over 30,000 works emphasizes art, architecture, photography, and design from the 19th century to the present. One of the four Carnegie Museums of Pittsburgh, Carnegie Museum of Art was founded by industrialist and philanthropist Andrew Carnegie in 1895. Learn more: call 412.622.3131 or visit cmoa.org.