"The Thoreau of the Adirondacks”: Rediscovering Harold Weston 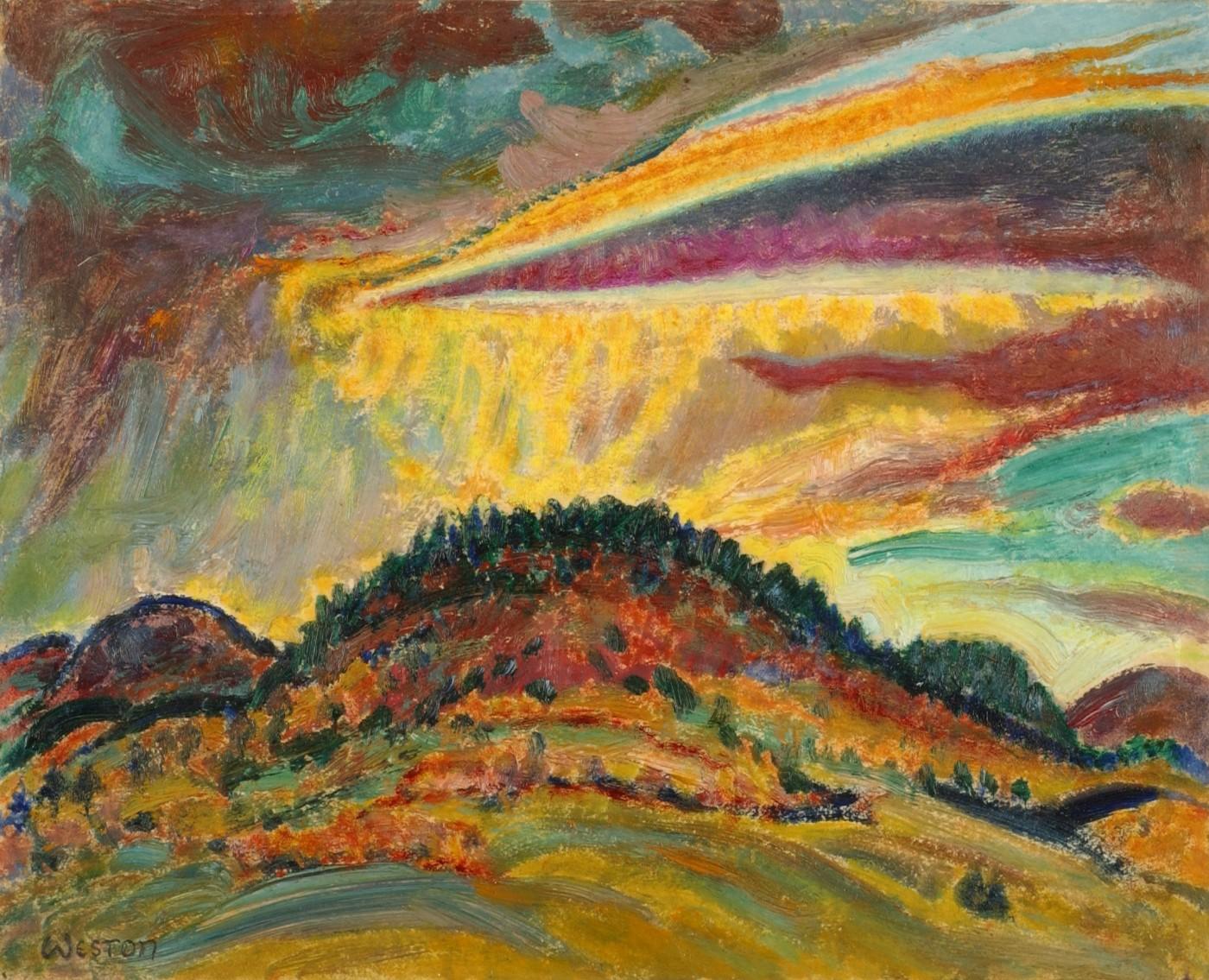 The rising curves of the Adirondack Mountains become a repeated motif in the early 20th-century landscape paintings of Harold Weston (1894-1974), now featured in a career spanning solo exhibition at Vermont’s Shelburne Museum. These daring, robust configurations of thickly painted natural forms echo the Maine landscapes of Marsden Hartley, a fellow regional modernist who also moved from observing nature to abstraction. While Hartley focused primarily on painting throughout his life, Weston balanced painting with writing and social activism, earning him the label “the Thoreau of the Adirondacks” bestowed by art critic and historian Helen Appleton Read. 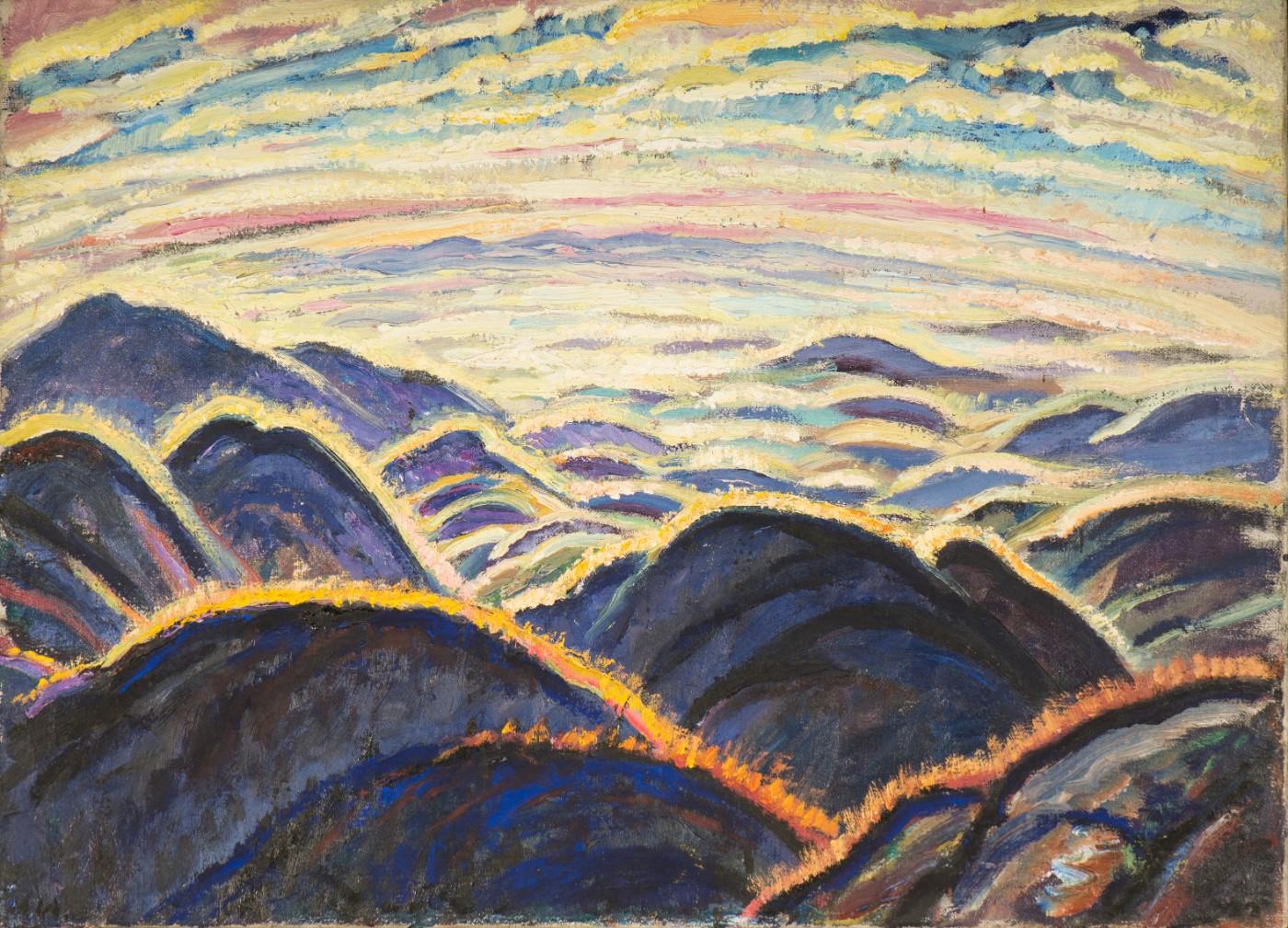 Showcasing two major periods, early landscapes (1920-1923) and the lyrical abstract Stone Series (1968-1973), the exhibition bookends Weston’s life, filling the years in between with excerpts from his diary and letters to his beloved wife Faith Borton whom he married in 1923.

Born into a comfortably middle-class family on Valentines Day, 1894 in Merion, Pennsylvania, Weston’s pleasantly normal childhood changed dramatically when he was struck with polio in 1911. His doctors said he would never walk again. Defying all expectations he not only learned to walk but went on to hike up and down the mountains that became his primary subjects in paint years later. In 1912 he entered Harvard University, majored in fine arts and served as editor of the Harvard Lampoon while contributing artwork and cartoons. Although his bout with polio prevented him from serving in WWI, Weston volunteered with the YMCA, traveling throughout the Middle East working with soldiers in Baghdad to establish a therapeutic art club. The starvation and disease that he encountered in the region had a profound effect on him, inspiring a lifelong commitment to advocating for global food aid. Perhaps Weston sought solace from the horrors he witnessed when he returned to the mountains near Saint Huberts, New York and built a rugged one-room cabin. While living there he painted through the harsh winters from 1920-22, creating his most vital landscapes. 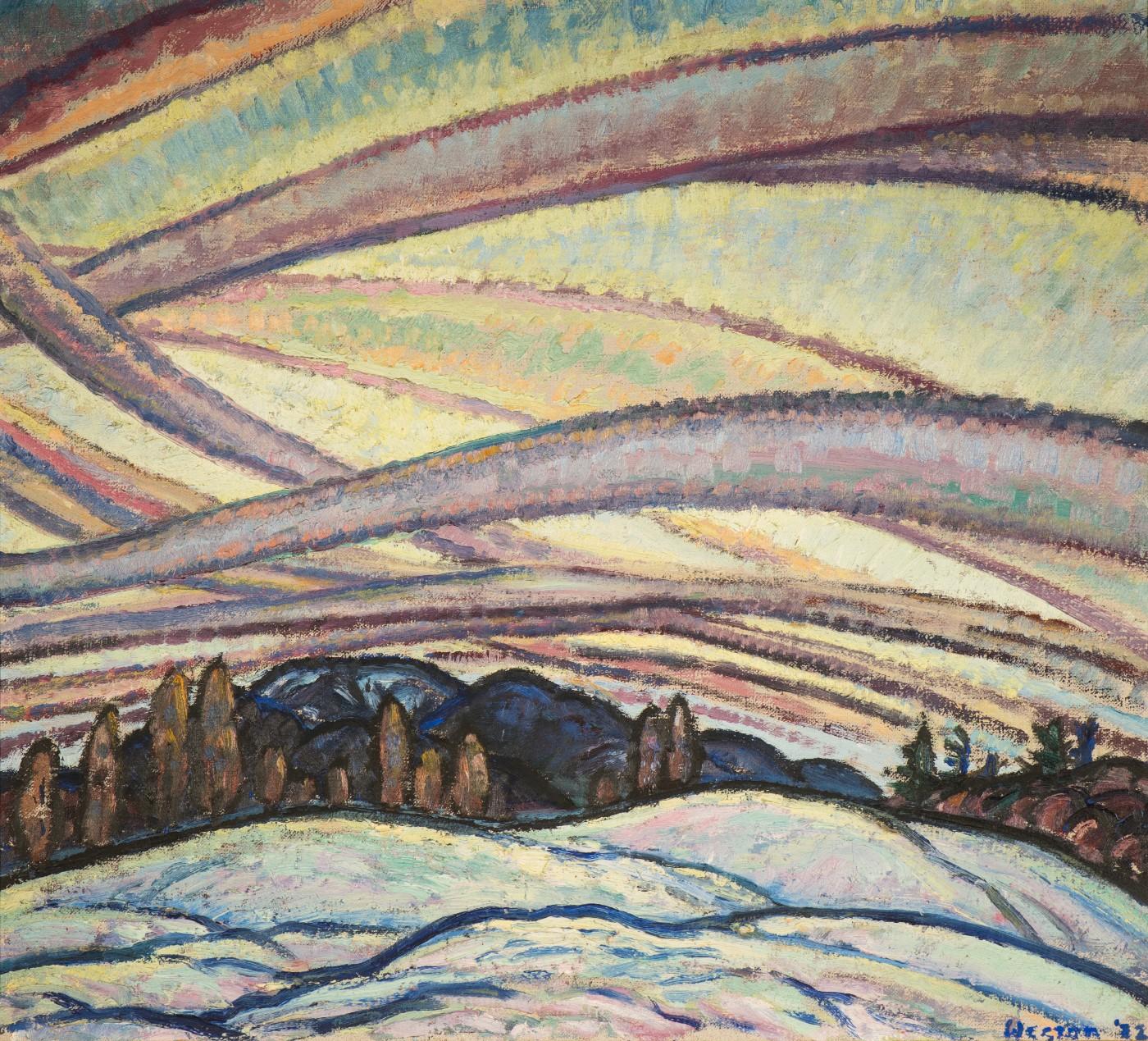 The gallery walls of the Shelburne Museum were painted a deep cerulean blue, a dramatic choice that curator Katie Wood Kirchhoff selected to highlight the wooden frames, richly carved and lightly gilded by Weston, each one a unique part of the aesthetic appeal of the work. There is no evidence of a straight horizon line where earth meets sky in any of Weston’s landscapes. Gently rounded mountaintops, often edged in thick black outlines arc upward to meet bulbous clouds. The curve dominates Weston’s compositions providing the visual link between nature and abstraction. 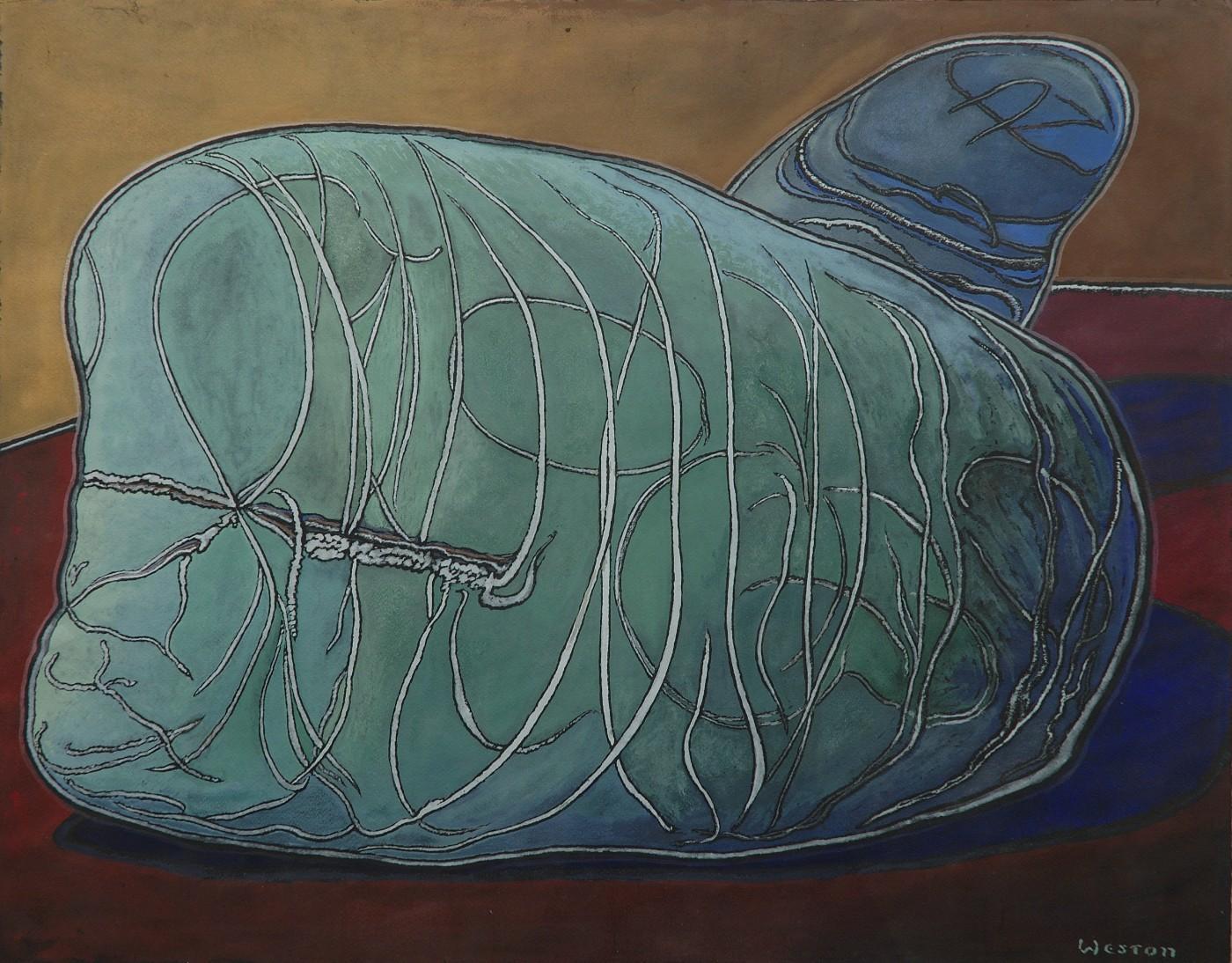 The 76 works that comprise the Stone Series (1968-72), all gouache on toned paper, were painted in the last years of Weston’s life. They were inspired by the white calcite bands found in Iberville shale stones originally discovered in Quebec and native to the shores of Lake Champlain. In Leviathan, Stone Series #4 (1968), the lines are clearly embedded in the stone. The stone is still presented object-like as in a still-life. By 1969 in Wind, #22 in the Stone Series, Weston’s line was suddenly set free of its subject, no longer confined in stone or restrained by the landscape. In later works like Updraft, Stone Series #74 those looping arcs have merged back again into the landscape, becoming one with earth, mountains and sky, bringing the line full circle. 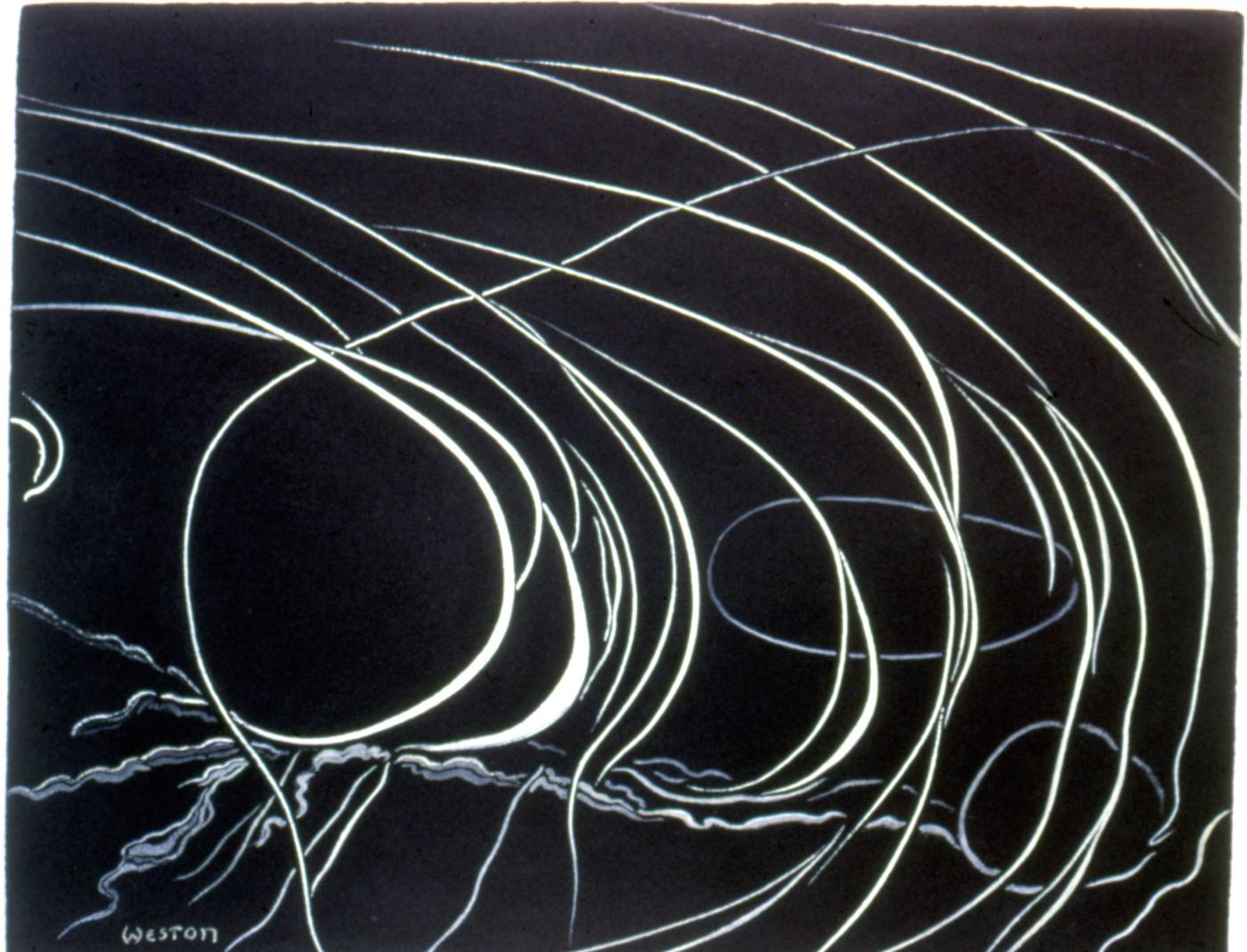 In 1971 Weston published his memoir Freedom in the Wilds: A Saga of the Adirondacks. He died the following year in New York City. By the end of his life, Weston was better known for his advocacy than his painting. His lobbying work led to the establishment of the United Nations Relief and Rehabilitation Administration in 1943. He later turned his attention to the arts, working to found the National Council on Arts and Government, which would become the National Endowment for the Arts in 1965. As devoted as he was to social causes, Harold Weston: Freedom in the Wilds shows a visionary artist equally committed to exploring his world through painting.