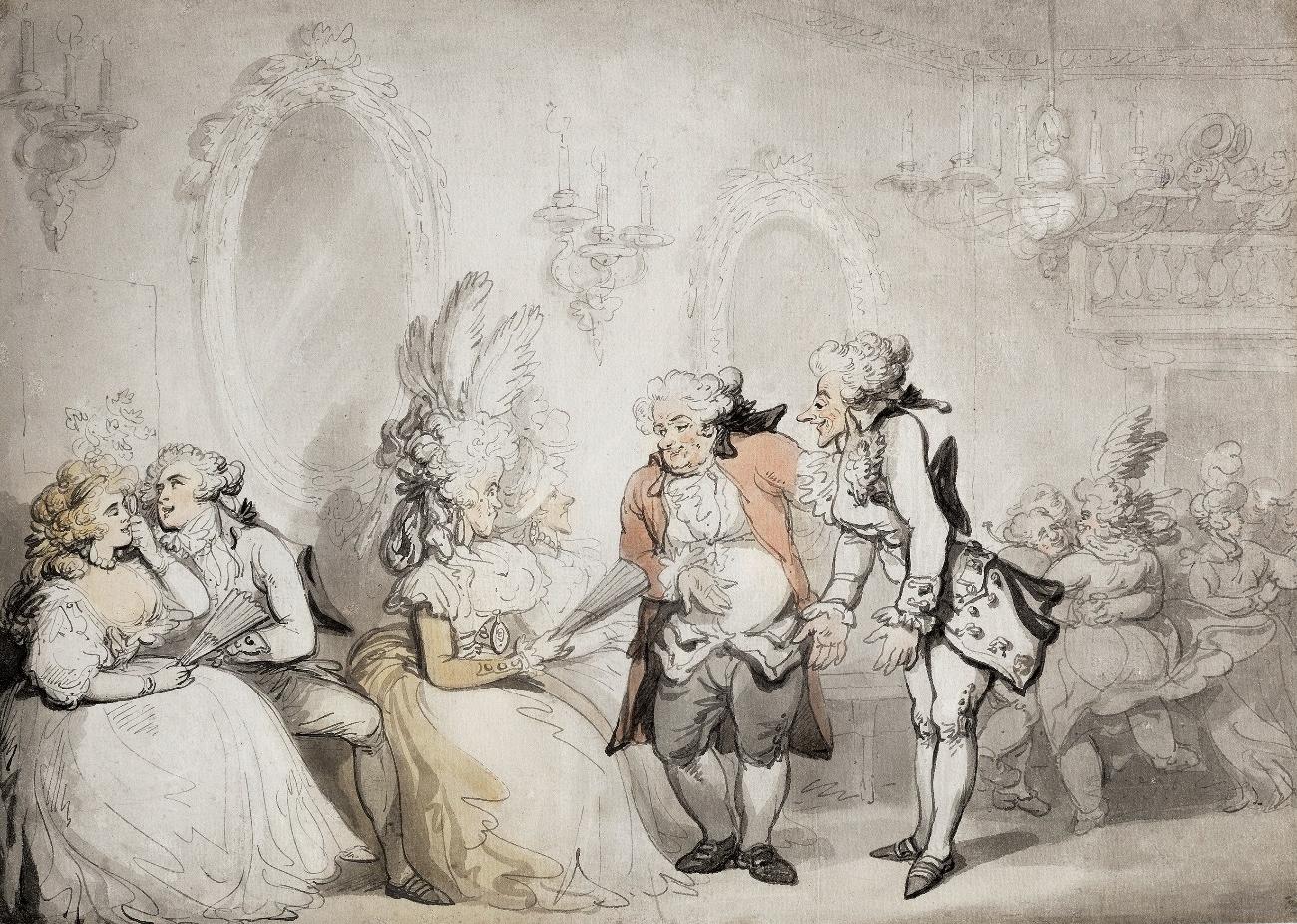 Thomas Rowlandson, A Master of the Ceremonies introducing a partner, pen, brown ink and grey wash on laid paper

Known for his satirical watercolors with biting social commentary, Thomas  Rowlandson’s popular works were widely circulated as prints in the Edwardian Era. The setting for the Rowlandson watercolor offered at auction by Bonhams of London on July 4, is Bath. 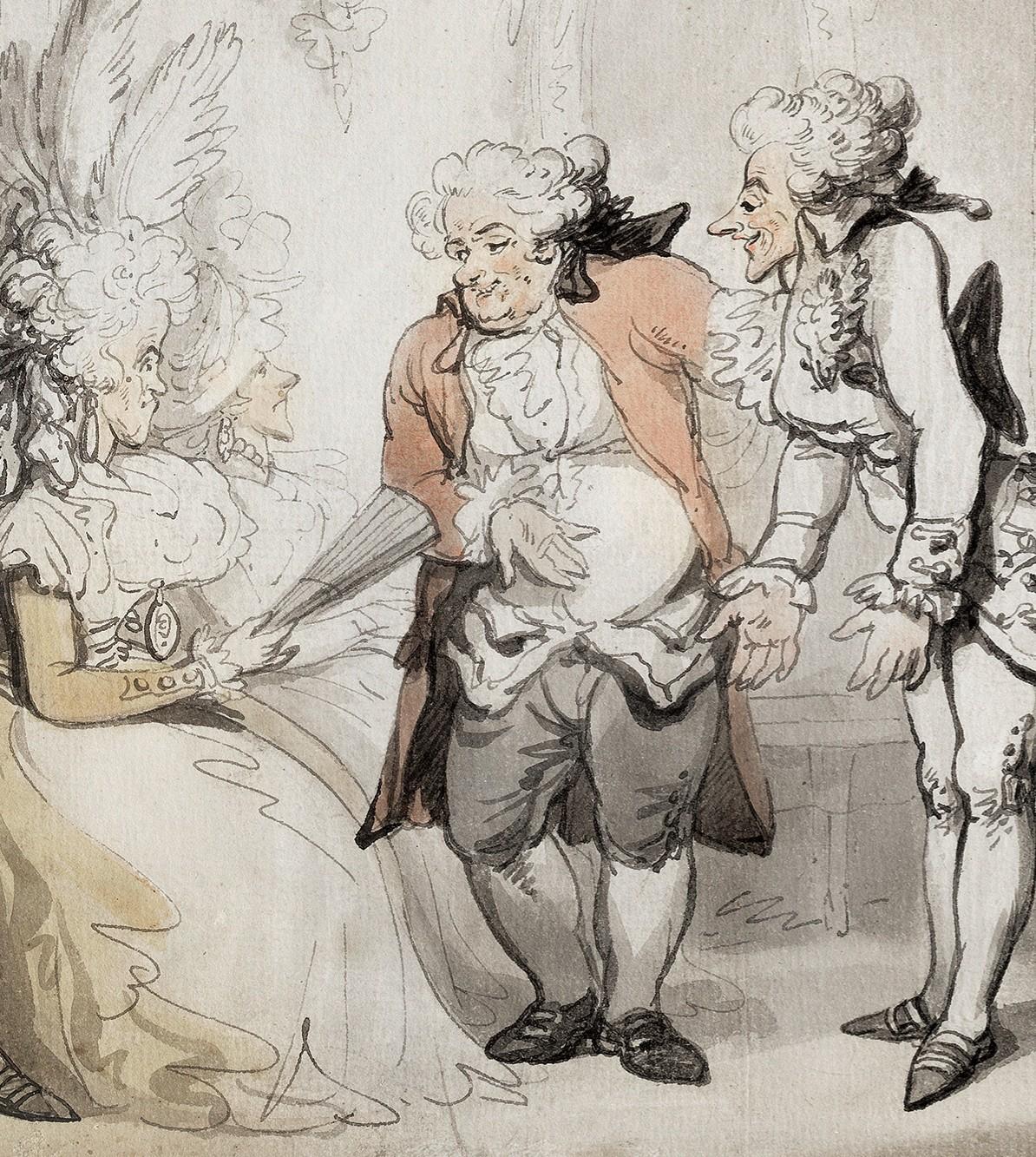 From the time of the Roman occupation of Britain, perhaps even earlier, Bath has been known for the warm, mineral-rich waters that bubble up from beneath the ground, waters long believed to have special healing properties, whether one bathes in them or drinks them. The city's now famous Roman baths were not actually rediscovered until the 1870s, but from the beginning of the 18th century, and following in the footsteps of Queen Anne and other aristocratic or otherwise influential figures, Bath evolved into a fashionable resort and spa. Those coming to take the waters needed to be distracted and entertained and such key duties came to be the responsibility of a Master of Ceremonies, the most famous of whom was 'Beau' Nash (1674-1762).

Over a period of 50 years, Nash put Bath on the social map, but the drawing that prompted this piece dates from the 1780s and the MC depicted would have been either Richard Tyson or James King – most likely the latter.

When Britain's attempt to hang on to her American colonies was finally thwarted, King, who had been serving his country in that lost cause, returned to England and in 1785 found employment as MC of Bath's Lower Assembly Rooms. There he served for 20 years before being appointed to oversee the more prestigious Upper Rooms, where he officiated until his death in 1816.

King even makes a brief, if anonymous appearance in Jane Austen’s Northanger Abbey, introducing the book's heroine, Catherine Morland, to Henry Tilney, the man she will eventually marry. (To avoid any confusion over dates, I should point out that Jane's book was completed in 1803, though only first published in December 1817, five months after her death.) 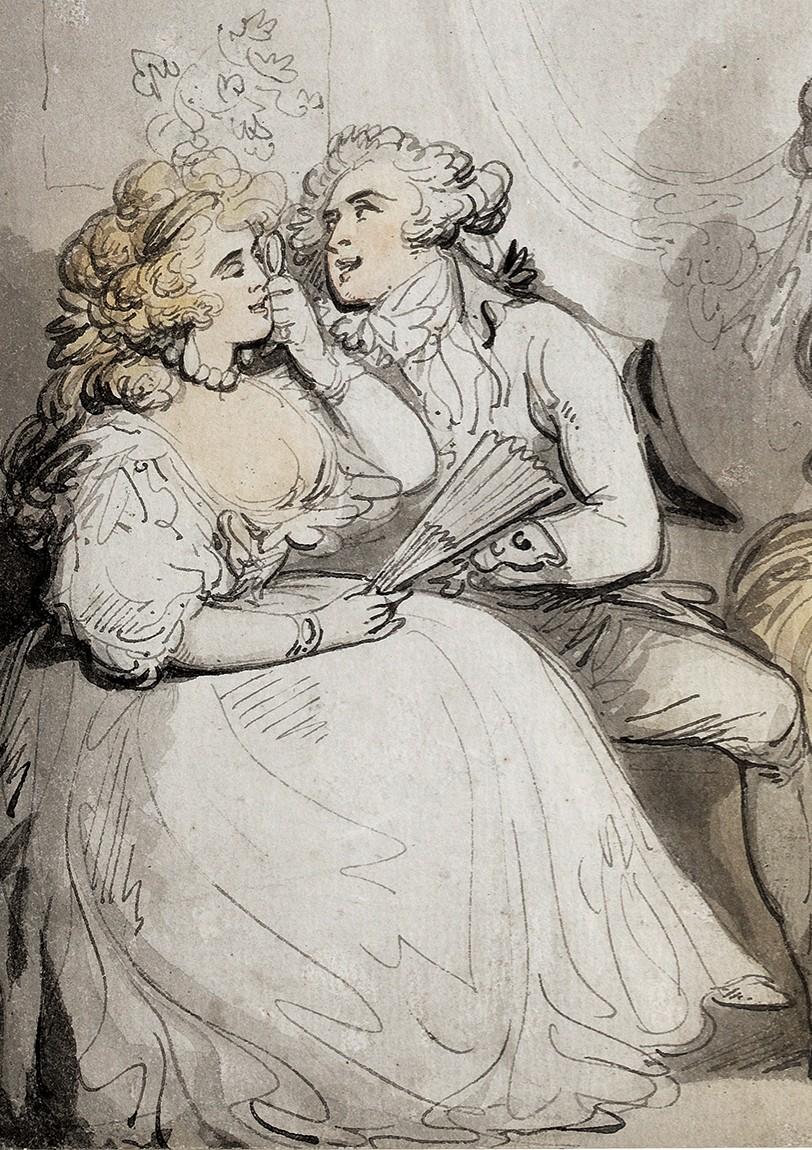 King's duties involved calling on new arrivals in the city, partly to vet them and assess their suitability to join those who had regular bookings for the Assembly Rooms, but also to collect a fee that would give them admittance to the balls and the use of gambling tables and the baths. In this manner he got to know everyone in the city and gather the intelligence essential to someone expected to make the most appropriate introductions, even to match-make. Part concierge, part diplomat, King was tasked not only with introducing newcomers but also with managing the dance floor, overseeing the smooth running of proceedings and diffusing social conflicts.

In Rowlandson's work we see the MC making introductions between a rather elderly dandy and two seated ladies. Sporting enormous wigs and feathered headdresses, they themselves look to be past their prime. To the right, we see a group of rather well upholstered ladies who are dancing, as the Bonhams cataloguer kindly puts it, with rather more enthusiasm than grace. At left we see an amatory dalliance in progress–one in which the fan-wielding young woman does seem in some danger of busting out all over, so to speak.

The 'Master of Ceremonies' was published as an etching in 1795, just a few years before what the Bonhams cataloguer called Rowlandson's "gouty gentlemen, ageing ladies and quack doctors" were immortalised in a famous set of 12 prints issued as The Comforts of Bath.