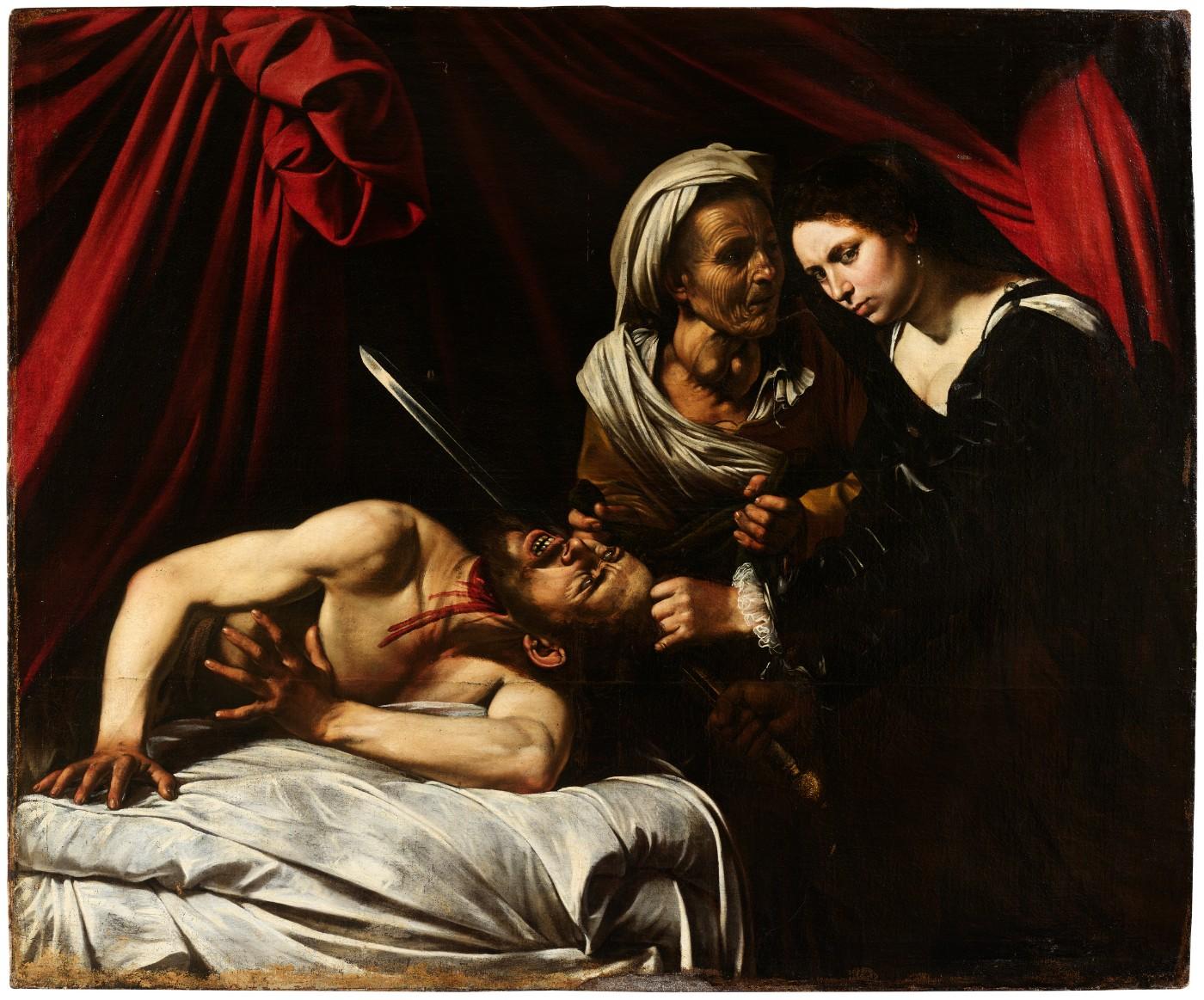 Over the years, auctioneer Marc LaBarbe had frequently been called to the home of a friend in Toulouse to evaluate some bauble or another found in his rural French attic. Usually, it turned out to be an item of modest value, if any at all. But this time his discovery was an auctioneer’s fantasy–Judith and Holofernes (1607), a lost masterpiece by Caravaggio found in 2014. It will stop at Adam Williams Fine Art in New York from May 10 to 17 following a London visit in March, then it will stand at auction for an estimated $171 million on June 27 in Toulouse.

“I was surprised by the quality of the painting but it was very difficult to see because the painting was dirty. So, it was very difficult to identify the painting,” says LaBarbe who, in 2016, discovered a rare Imperial Qing Dynasty scroll that was auctioned for roughly $25 million. “When I took this photo I sent it immediately to [art appraiser] Mr. Turquin, who said to me, ‘you've found a very precious painting.’” Adding a dash of irony is the fact that burglars had broken in two years before and stolen only perfume bottles, missing the canvas which was unusually well preserved behind mattresses and a box spring.

“We didn’t think of Caravaggio because it didn’t seem possible. But we realized he had a good Italian 17th-century painting,” recalls appraiser Eric Turquin. “One of our team remembered an exhibition a year before in Naples all about this copy of this picture. They showed a copy of their Judith by Finson, saying this is all we have left of the lost painting by Caravaggio.” 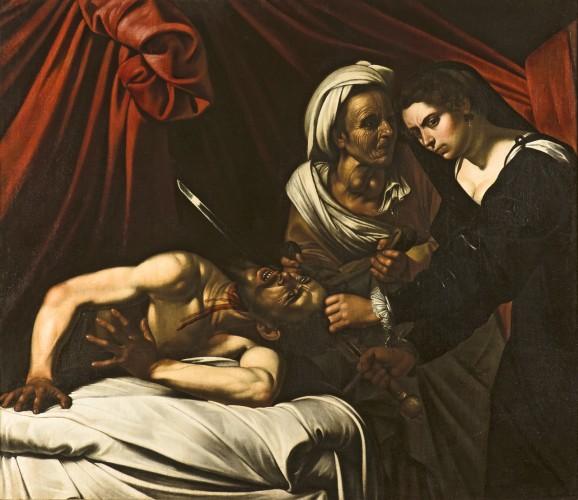 Whatever skill Flemish painter Louis Finson lacked as an artist he made up for as a dealer, admiring, owning and trading numerous works by Caravaggio. Among them was Judith and Holofernes, depicting a scene from the Old Testament Book of Judith in which the beautiful widow learns of Syrian General Holofernes’ plan to raze her home city of Bethulia. While he’s drunk, she seduces, then slays him.

Caravaggio painted two versions of the scene. The first was rediscovered in 1950 and is currently on view at National Gallery of Ancient Art in Rome. Employing a brighter palette, the composition is mainly the same, including the slayer and her victim, as well as Judith’s servant. In that version, painted in 1598, Judith recoils from her act. In the newly discovered version, the palette darkens, in keeping with the artist’s work from this period. Judith does not recoil, but leans into her bloody task, turning a sinister gaze on the viewer. 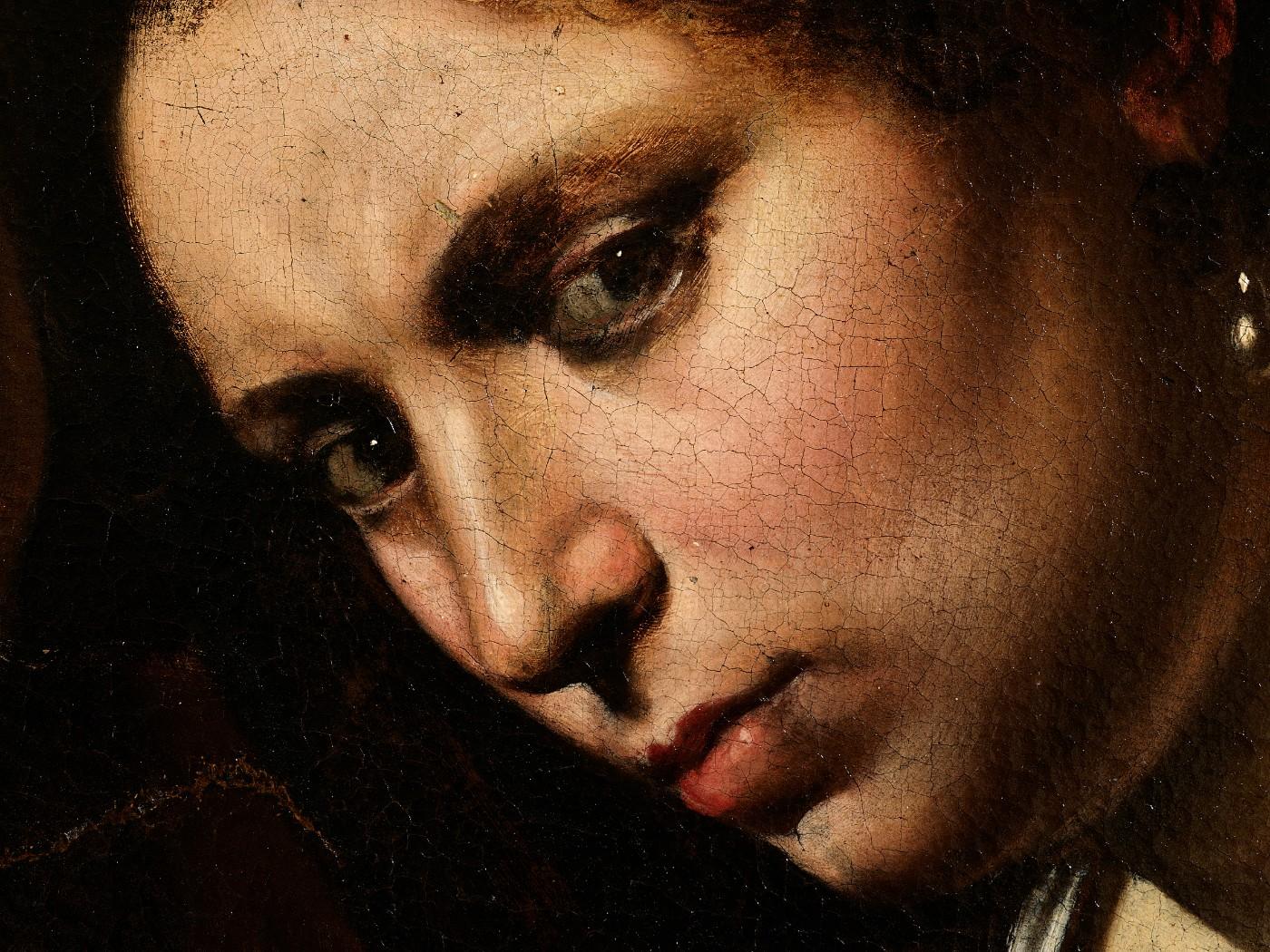 It was likely painted in Naples, about a year after Caravaggio fled Rome following the murder of an acquaintance in a duel stemming from a tennis disagreement. Experts are split on the canvas’ authenticity, with Caravaggio specialist Mina Gregori claiming it’s Finson’s second copy of the artist’s original. When it was shown at the Pinacoteca di Brera in Milan in 2016, a board member of the museum resigned in protest.

Arguing in favor of Caravaggio are equally credible experts including Nicola Spinoza, former director of Naples’ Capodimonte Museum and author of Caravaggio the Final Years: 1606 - 1610. He wrote, “One has to recognize the canvas in question as a true original of the Lombard master, almost certainly identifiable, even if we do not have any tangible or irrefutable proof.”

While not irrefutable, Turquin and LaBarbe’s proof lies in three documents, including a 1607 letter written by Flemish painter Frans Pourbus the Younger mentioning the work in Finson’s studio. The canvas appears in Finson’s 1617 will and is entered two years later in an inventory of the estate of his associate Abraham Vinck.

Keith Christiansen, Chairman of European Paintings at the Metropolitan Museum of Art in New York is another who believes it the work of the Italian master. “He explained to me why the picture is by Caravaggio,” Turquin says of Christiansen. “He showed me how to look at my own picture. Handling of the cloth, for instance, can only be by Caravaggio, nobody else.” 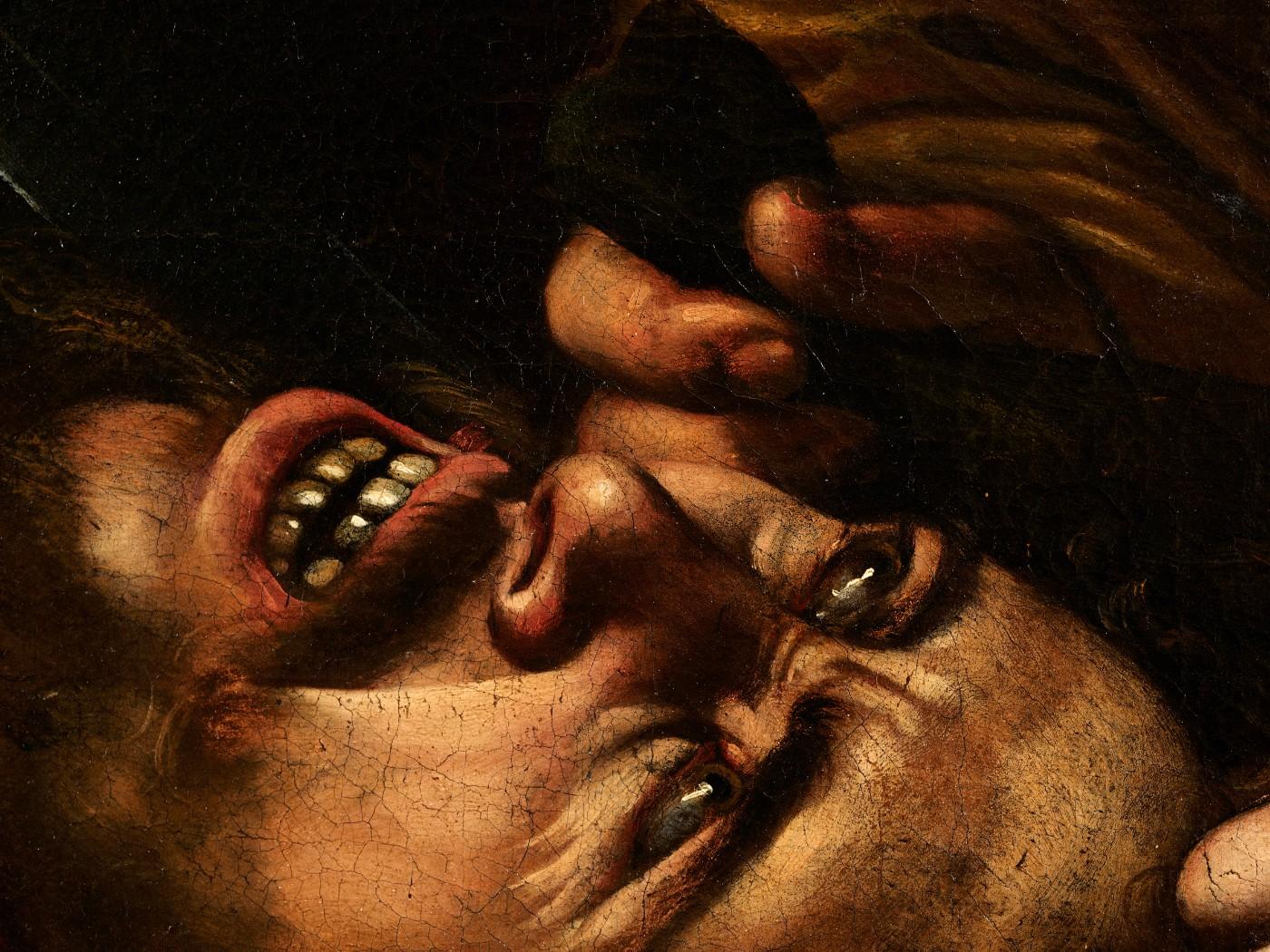 X-rays and infrared reflectology show changes beneath the surface of the painting called pentimenti, suggesting the artist was working out compositional features in a way a copyist would not. “A copier doesn’t copy what is underneath,” notes Turquin. “They are very big changes. The eyes of Judith were looking at Holofernes, like in the first version, now they're looking at us.”

Some skeptics have pointed to concentric wrinkles on the servant’s face and the crude teeth in the mouth of the dying Holofernes as uncharacteristic of Caravaggio. “They (skeptics) all say it’s a marvelous painting. It’s not a Caravaggio but it’s a marvelous painting,” responds auctioneer Labarbe. “They said it’s a copy but Finson experts say it’s impossible that it’s Finson.”

Following the discovery of the painting, the French government placed a 30-month ban on export whilst the canvas was studied and considered for acquisition by the Louvre. In the end, Museum Director Jean-Luc Martinez released the painting with no plans for acquisition. Turquin is quick to point out that the museum’s decision was not tied to questions of provenance. “The director of the Louvre told me your picture is magnificent but it is too expensive for us and we’ve already got three major Caravaggio of the three different periods of Caravaggio and we cannot today spend 150 million [euros] to buy a picture.” 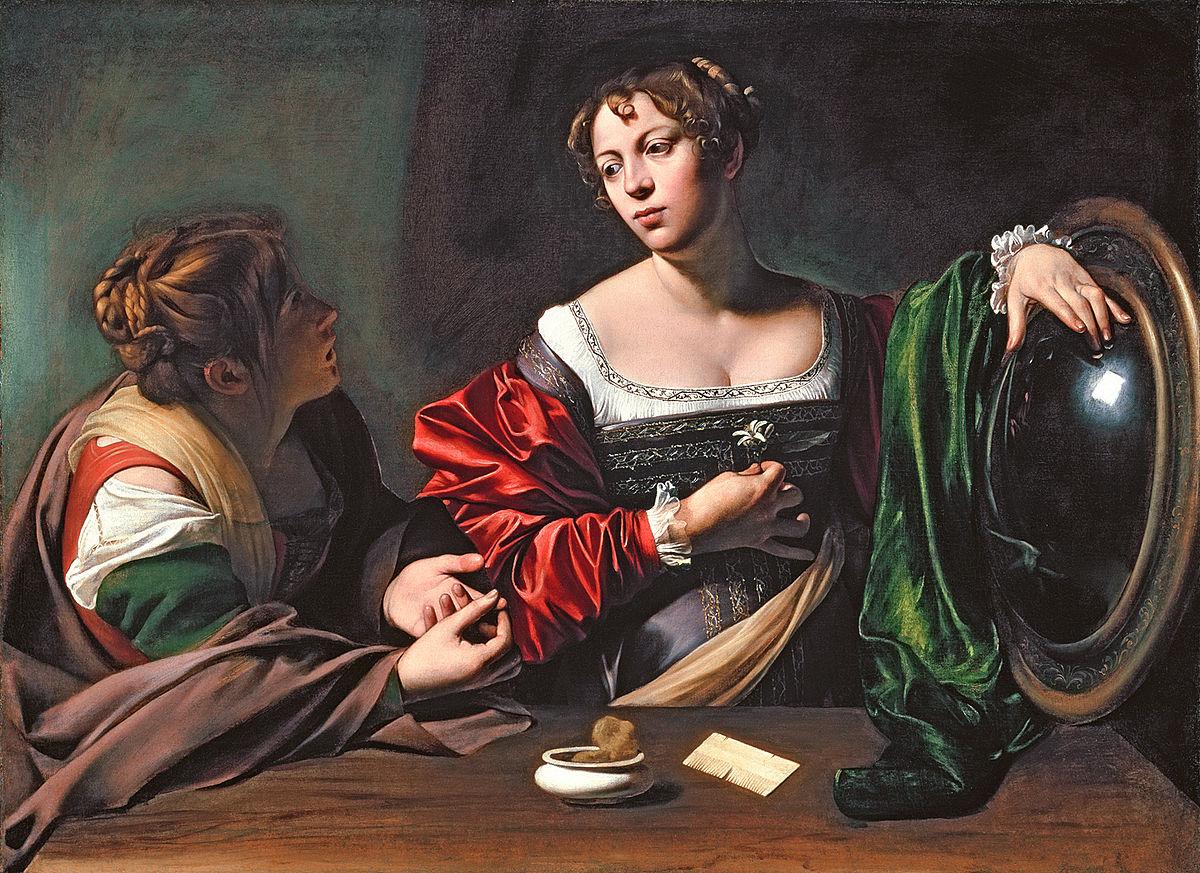 Caravaggio, Martha and Mary Magdalene, circa 1598

In an unusual step, the estimated auction amount of $171 million includes no reserve price, a bottom figure below which the painting remains unsold. The last Caravaggio to go to auction was Martha and Mary Magdalene, hitting the blocks at Christie’s in 1971. Then head of the National Gallery, Michael Levey, did not believe the painting was by the master and so it failed to sell. Two years later it was acquired by the Detroit Institute of Arts where it resides today.

The most recent comparison might be 2017’s auction of Salvator Mundi by Leonardo Da Vinci to a mystery buyer that turned out to be the Louvre Abu Dhabi. It, too, had a disputed provenance but fetched a record $450 million anyhow, and is being sought by the Louvre (Paris) for their Da Vinci show this fall.

“Caravaggio was not a persecuted artist. He was just as persecuted as Damien Hirst is today. His pictures were selling like hotcakes, for vast amounts of money,” Turquin shrugs, adding, “Who knows how much a Caravaggio in good condition and of that quality is worth? In its own time, this picture was worth a lot of money.”