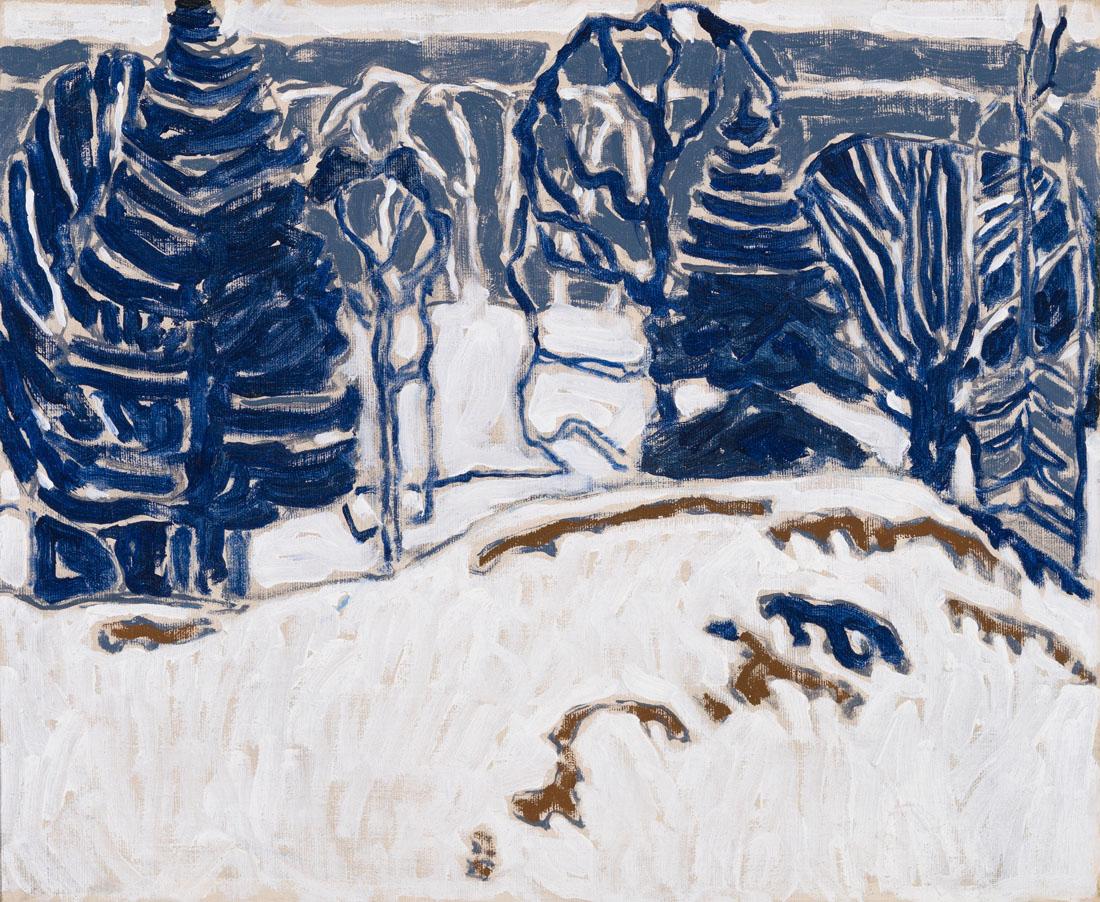 Though his works feature prominently in many of Canada’s most prestigious arts institutions and he is considered one of the country’s most celebrated modernist artists, David Milne has been described as having worked at the periphery of Canadian modernism. Much of his work depicts landscape in some capacity, but his mark-making is strikingly different than that of other well-known mid-century Canadian landscape painters such as Emily Carr or members of the Group of Seven. Milne’s pieces make extensive use of white space and exposed unprimed canvas. His forms are often scratchy, even skeletal, and impart a haunting atmosphere to his subjects. In December, Heffel Fine Art Auction House is offering three of his paintings as part of their Canadian, Impressionist, and Modern Art sale, all of which are being previewed at Heffel’s Montreal location.

Milne developed a signature color method over the course of his practice, which took him from art college in New York City to the scarred battlefields of France after the First World War, and to rural upstate New York and southern Ontario where he often painted in solitude. He saw black and white as bases on which to add other values, which he would apply to the ground in what he called “shape groups.” Gray Hill, one of the pieces for sale on December 2, was painted between 1915 and 1916. It shows clear evidence of Milne’s signature method: his colors are grouped together based on tone. In rejecting mimetic color and focusing instead on keeping darks together, largely apart from white and light tones, Milne distinctly separates the background from the middle-ground and foreground. In Gray Hill, deep blues and slate grey act as both outlines and shapes themselves, serving as strong visual counterpoints to the blinding white that evokes snow and sky. The piece is estimated to sell for $60,000-$80,000 CAD. 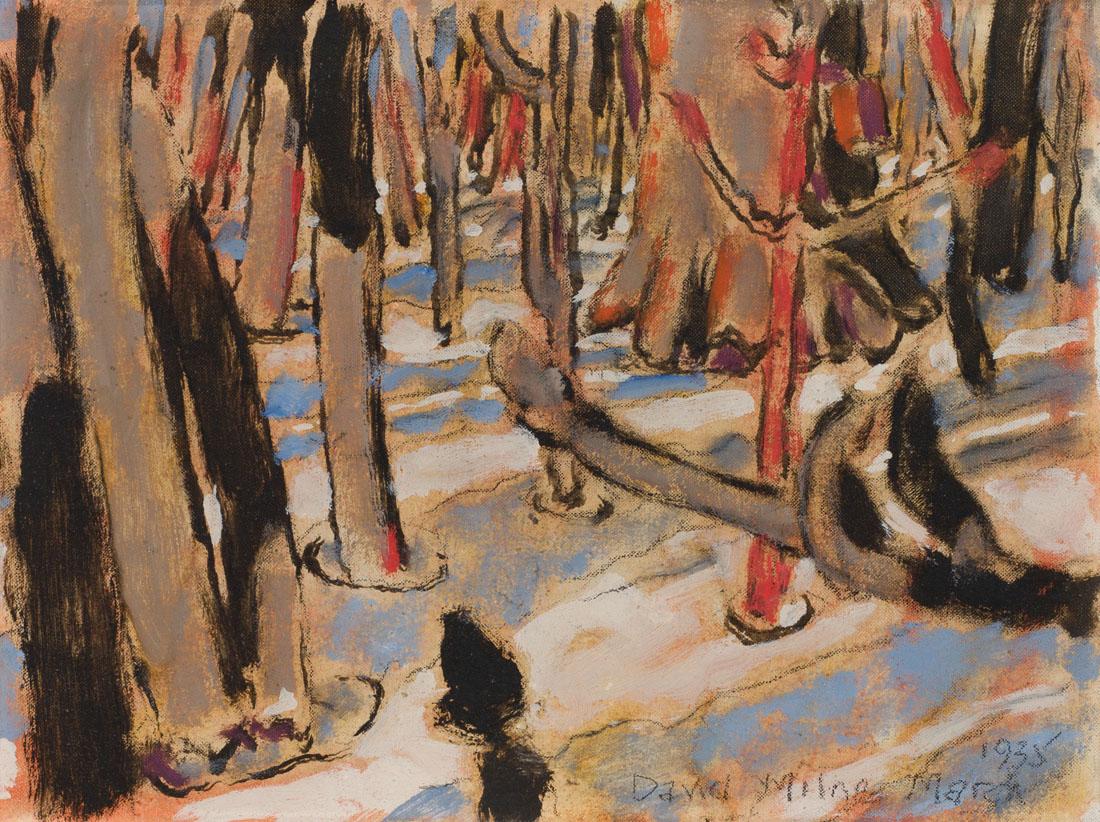 Milne’s work is often described as being highly analytical and cold in appearance. Milne left behind a great deal of personal writing, which has allowed scholars to analyze his work with the artist’s own explanations in mind. In reflecting on his landscape paintings, Milne explained how he approached his subjects as theoretical challenges, translating charged spaces and sites into methodical mark-making exercises.

While training in New York, Milne became increasingly disinterested in representational subjects in his work. Throughout his career, he continued to work through the visual implications of moving away from illusionist scenes. He relied extensively on color as an independent means of expression—a feature that is evident in works like Gray Hill, where a limited palette is responsible for evoking a strong sense of place rather than simply suggesting the specific locale depicted. In 1918 and 1919, Milne traveled to France from England, where he was stationed for the last months of the First World War. He joined the Canadian Government’s War Records, a project aimed at documenting Canadian participation in the War. Milne produced over one hundred watercolors of sites in England and France while part of the initiative. The artist approached his battlefield subjects with a degree of emotional separation, allowing empty page space and sparse lines to evoke scorched earth and muddy debris.

Along with Gray Hill, Heffel is auctioning two more of Milne’s oil on canvas paintings. Snow in the Sugar Bush of 1935 is estimated to sell for between $30,000 and $50,000 CAD. This painting is much denser than Gray Hill, with pattern-like trees populating a snowy ground. All forms in the composition seem to impose on the viewer, with trees and the shadows they cast rendered in thick bands of shadow. Where his earlier works like Gray Hill make extensive use of open-seeming space, Snow in the Sugar Bush uses the interplay between horizontal and vertical lines to prevent the viewer from accessing the horizon line beyond the forest. 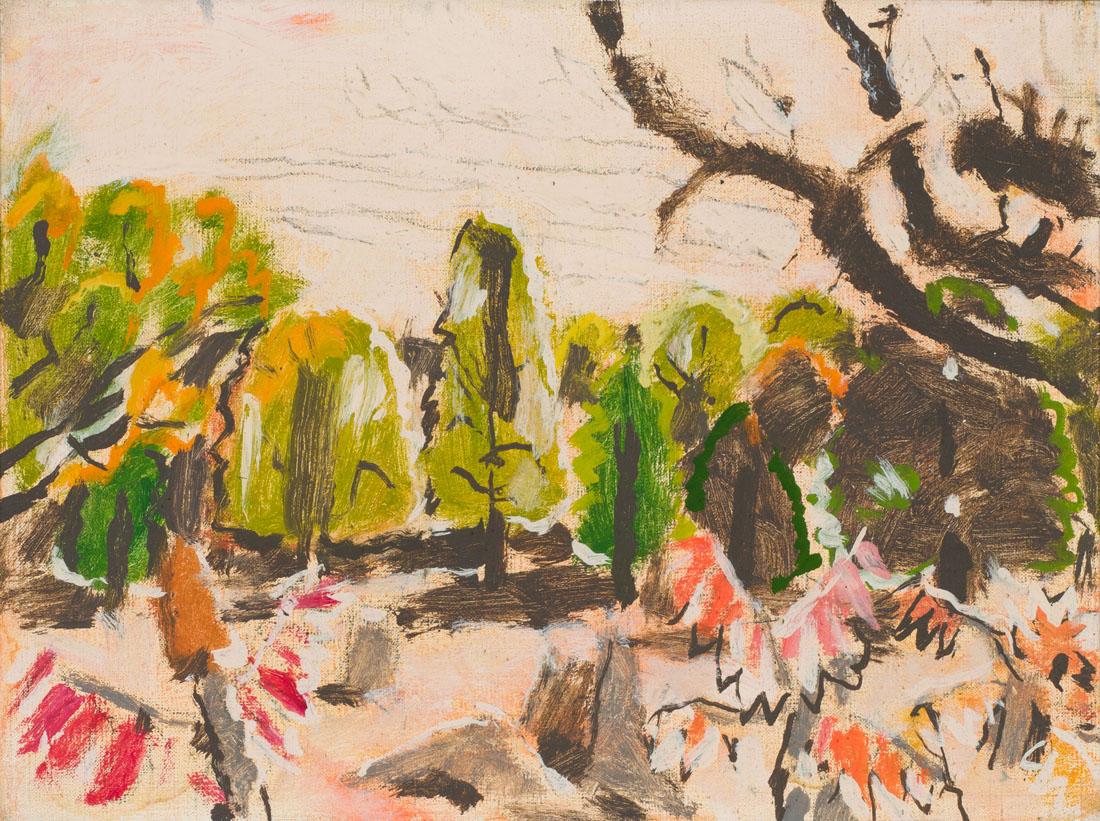 The third work up for auction, 1945’s Green Woods and Sumach, seems a dramatic formal departure from the two earlier pieces. Here, Milne makes use of bright, almost acrid greens and golds. Despite the shock of vibrant, undifferentiated tones, Milne returns to his signature use of blank space and thin, sketch-like lines. This last piece is estimated to sell for $20,000-$30,000 CAD and provides a strong contrast to Sugar Bush’s thick, claustrophobic space and the earlier Gray Hill’s cool, silhouette-like shapes.