Anyone who studied art at Boston University anytime from 1955 through the 1970s knew the work of Hyman Bloom (1913-2009). As an art major there during the 1960s I was caught in the battle where Boston was ground zero for what became known as Figurative Expressionism, an antidote to the wave of abstraction that was sweeping across the country post-WWII. Art historian Judith Bookbinder covers the period in her informative, extensively researched volume Boston Modern: Figurative Expressionism as an Alternative to Modernism, 2005.

Born in Lithuania, now Latvia, Bloom settled with his parents in Boston’s West End in 1920 when it was home to a large eastern European immigrant population. He went on to become an artist, living in Boston his entire adult life working in relative seclusion until his death at the age of 96. Although revered by his contemporaries, Jackson Pollock and Willem de Kooning, the fiercely independent Bloom was relegated to the sidelines due in part to his mystical nature and reticence to engage in an increasingly celebrity-driven art scene. In spite of being exhibited at the Museum of Modern Art and featured at the 1950 Venice Biennale alongside Pollock, de Kooning, and Arshile Gorky, he remained a regional artist, until now, perhaps propelled back into the national consciousness by a beautifully realized exhibition, now on view at the Museum of Fine Arts, Boston.

Self-Portrait, 1948, a vertical, life-sized flayed, armless, cadaver-like figure seen from the back opens the exhibit and telegraphs to visitors that this work is not for the squeamish. Rembrandtesque in its chiaroscuro drama the thick paint is surprisingly not drippy or encrusted. Rather, the brilliant reds and orange brush strokes seem to transcend their subject, their inherent energy fairly bursting forth from the form creating a life of their own. This oil painting was flanked by two, equally large charcoal drawings, Tree (Light Against Dark) 1962 and Tree (Dark Against Light) 1962. The structure of the body is analogous to the armature of the tree, its branches stripped of leaves and its roots, seen both above and below ground, hint at nature’s power of regeneration. 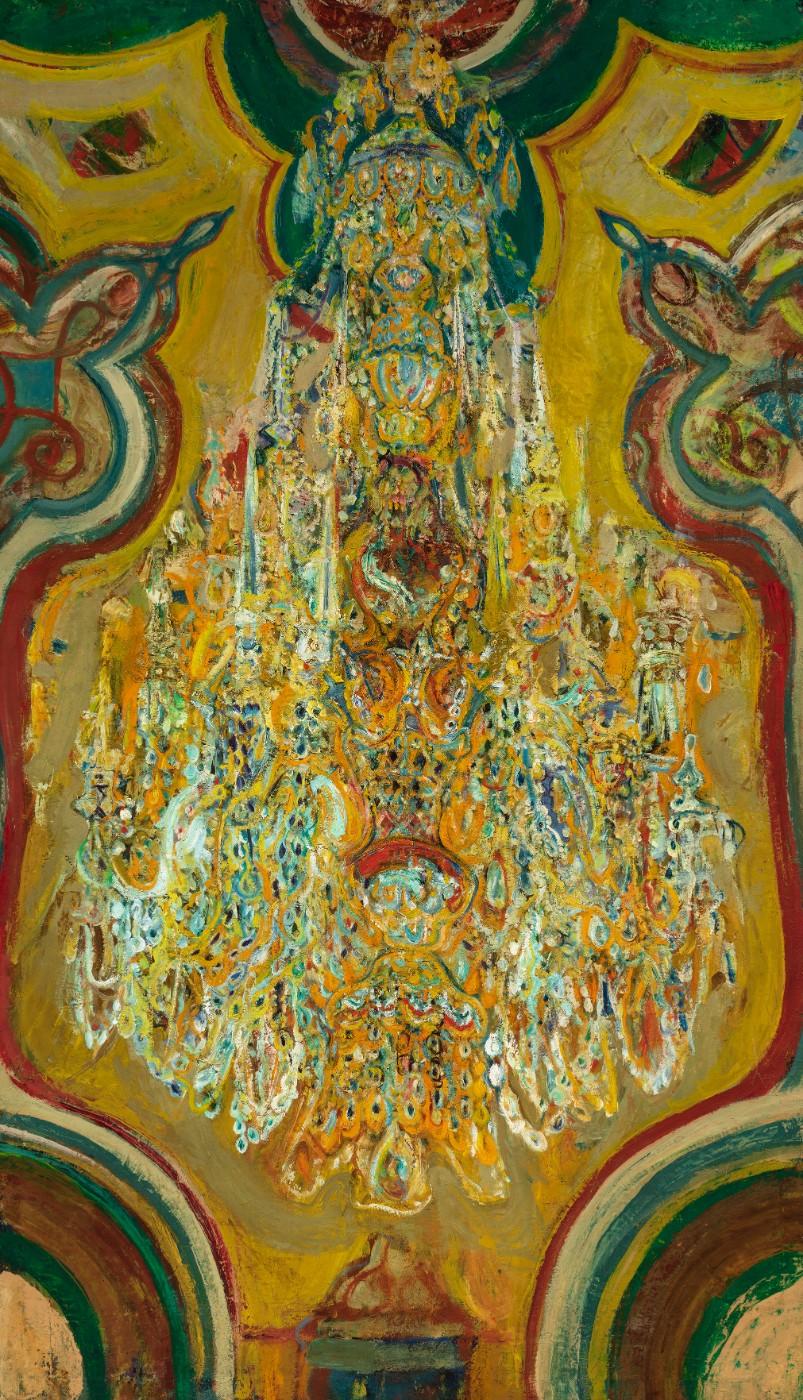 Bloom’s Renaissance-like draftsmanship, grounded in observational drawing, gave him the freedom to draw from his visual imagination and to explore mythological subjects, some inspired by his Judaic heritage seen in the more decorative patterning and jewel-like color of Chandelier No. 2 from 1945. He drew ceaselessly, his series of boxers and wrestlers are reminiscent of Thomas Eakins, and his monumental drawings are works in their own right, rather than preparatory work for the paintings. But it was Bloom’s first visit to the Kenmore Hospital Morgue, arranged around 1940 by professor David Aronson that changed the trajectory of his work. There he confronted the “paradox of the harrowing and the beautiful” and felt compelled to look below the surface of things to tackle and ultimately, through his artistic practice, transcend death. 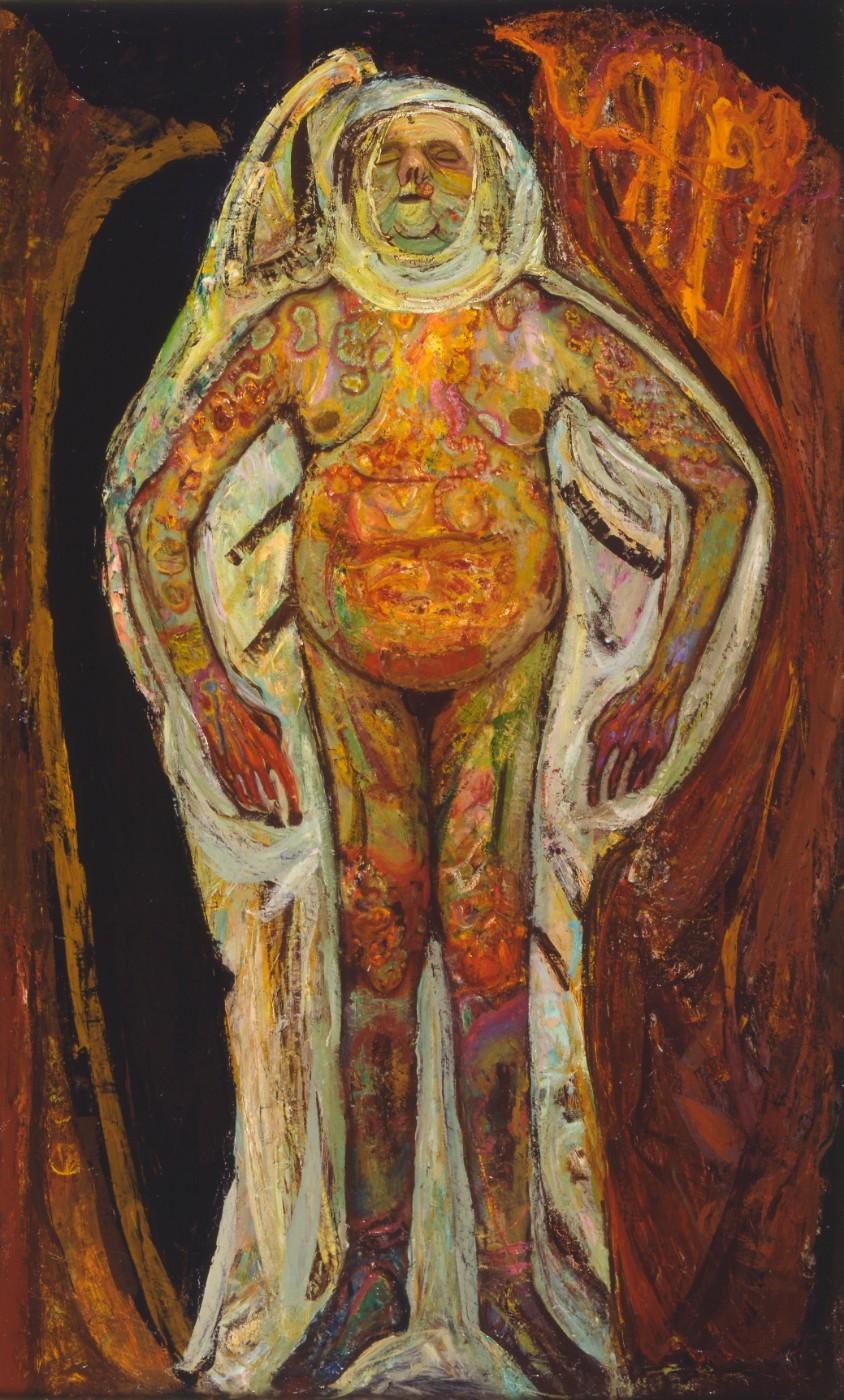 Bloom’s female bodies are often depicted surrounded by soft flowing shrouds as in Female Corpse Back View (1947) and Female Corpse Front View (1945) or in the case of The Bride (1941) the horizontal figure is encased in flowers, floating dream-like on a lacey wave, her pale face and eyes closed in eternal slumber.

Paintings like The Hull, a tour de force from 1952 and the astoundingly complex The Anatomist, from 1953, are works that imprinted on my brain as an impressionable art student. Seen again they have only gained in power over time. In these works, the hands of the living are shown mucking around in the entrails of the dead, treated like nothing more than a side of beef. The shallow depth of field thrusts these images at us. The comparison with the more famous Brit Francis Bacon is undeniable. In 1960, curator Frederick Wright organized a joint exhibition of Bacon and Bloom at The New Art Gallery at the University of California, Los Angeles. Wright, formerly from Boston’s Institute of Contemporary Art, saw the synergy between these two artists’ works that shared a terrifying beauty, a sense of anxiety in life knowing we all inevitably face death alone. 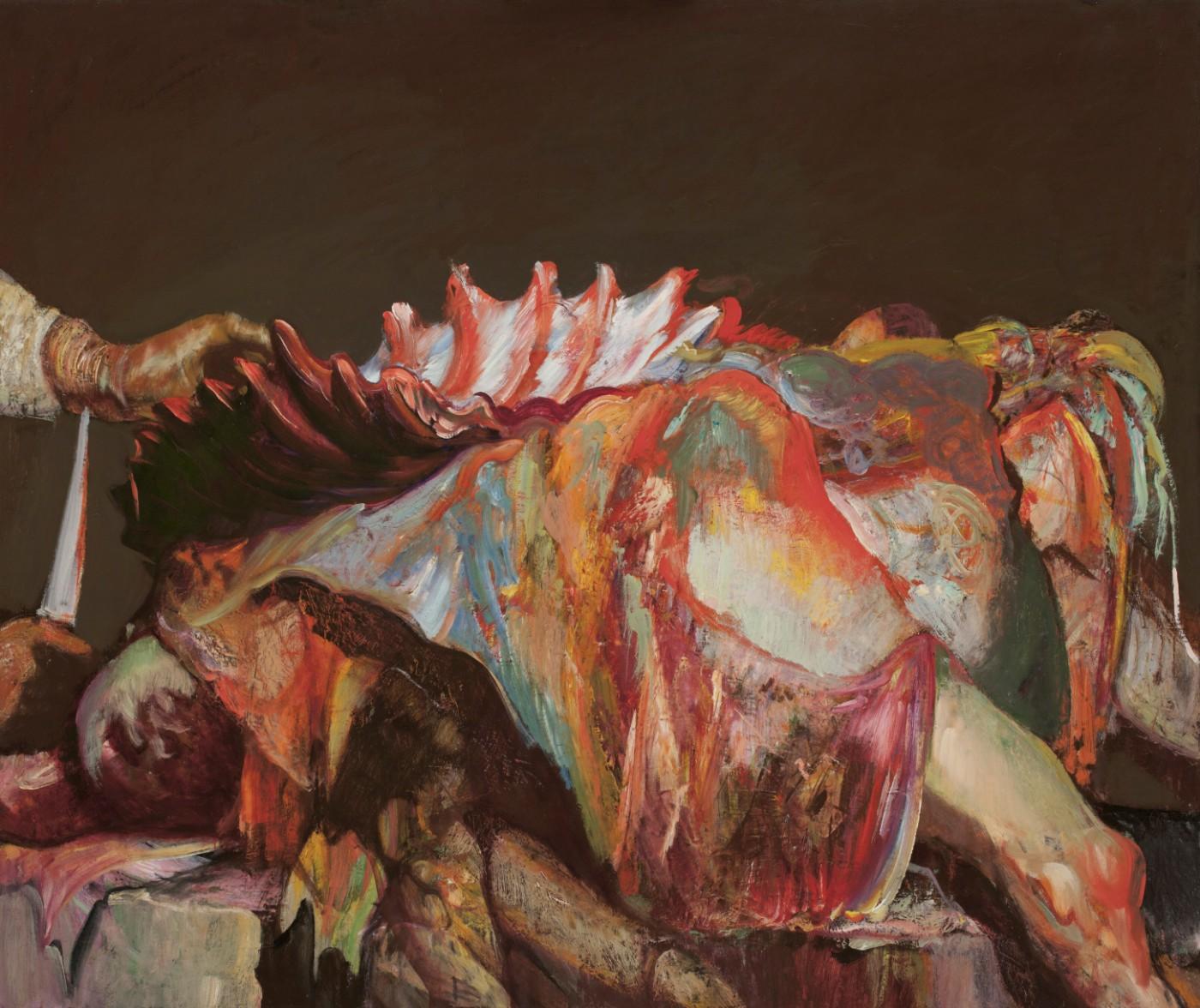 Hyman Bloom: Matters of Life and Death is on view in the Henry and Lois Foster Gallery at the Museum of Fine Arts, Boston through February 23, 2020.