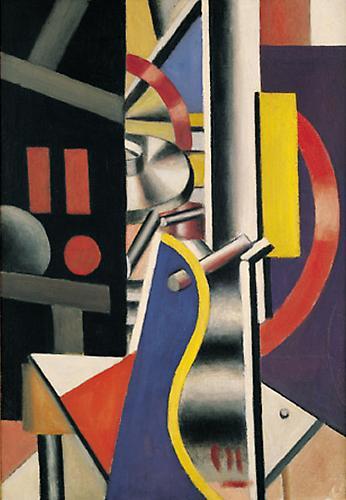 On February 27th, Fernand Léger’s (1881-1955) L’usine or Motif pour le moteur sold at Christie’s London at the Impressionist and Modern Art Evening Sale for over 1.9 million pounds ($2.9 million), far exceeding the auction house’s estimate of nine hundred thousand to 1.2 million pounds. Painted in 1918, the oil on board work is signed and dated by the artist, and includes a personal dedication from the artist to his friend, the Swedish art and design historian Gregor Paulsson. The painting is small—14 inches and 1/8 by 10 inches and 1/8—but its sale price speaks to the artist’s monumental importance to European modernism.

Léger’s work is part of a series of mechanically inspired paintings that the artist completed after his service in the French military during the First World War. Another similar work, Dans l’usine, also from 1918, sold by Christie’s in 2009 for $2.7 million, is strikingly similar to the work. While Dans l’usine features more pared down forms, flat blocks of solid color and large panels of bright yellow and red over more muted blues and purples, the recently sold L’usine depicts a busier jumble of intertwining and overlapping mechanical parts. Rods, wheels, cubes, and gleaming metal seem to emerge from and interrupt other fragments, all crisply delineated in precise black and white outlines. In both pieces, color has been applied in sharp blocks: orange-reds are juxtaposed against pitch-back, but the Christies version features mossy green panels interspersed with shiny grey wheels.

Both canvases celebrate a chaotic world of man-made industrial apparatuses. While many other artists who had served in the military during the First World War viewed the machine as a dystopic instrument of death, and something to be feared, Léger developed a postwar reverence for industrialization and its potential to reach all levels of society. That the artist painted a number of similar works meditating on the same theme seems to support this.

Léger’s work participates in an early twentieth century modernist fascination with the machine. The turn of the century in many parts of Europe witnessed a rapid increase in the machine’s prevalence in daily life: domestic tools, improvements in small and large scale transportation, and industrial innovations pervaded peoples’ homes and workplaces. Before the War, many Cubist, Futurist, and Vorticist artists from France, Italy, Russia, and the U.K. took the machine as a symbol of exciting modern innovation. While, for many, the machine quickly took on a much more sinister and highly destructive role during the First World War (replacing, as many commentators noted, the excitement of daily efficiency with the horror of mass industrialized killing), some painters like Léger continued to be optimistic about machines’ roles in postwar reconstruction. Léger’s postwar work is often described as utopic, despite appearing dehumanizing and impersonal. Léger would not use the term “machine aesthetic” until 1924, but even in the 1918’s tool-themed works, we see evidence of his excitement at the possibility for mechanical dynamism, light, and the emergence of order out of chaos. Christie’s has sold a number of Léger’s drawings, paintings, studies, and ceramic pieces, but L’usine is one of the few works here that exemplifies the artist’s exploration of non-figurative mechanical themes.