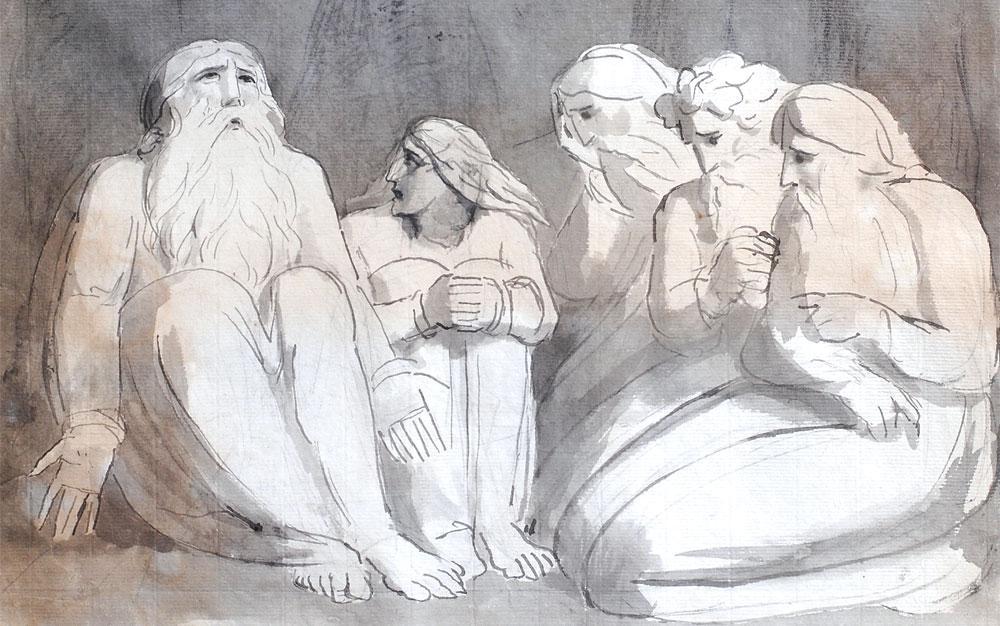 William Blake, The Complaint of Job, c. 1785. Preparatory sketch for a later drawing and print.

In October 2016 at the 49 Geary Street Art Gallery building in downtown San Francisco, John Windle opened the doors to the newest addition to his rare book business: The William Blake Gallery. This is only the second-ever gallery devoted to the artwork of the radical, visionary printmaker from the Romantic period, William Blake (1757–1827). The first Blake gallery, Windle pointed out, was opened by Blake himself in 1809 and closed without fanfare within a few months. “He never sold a single piece in his gallery, but recently the Tate Gallery in London reprised his doomed show,” he added.

Windle’s iteration of The William Blake Gallery is an elegant, white, pie-shaped wedge of space that embraces both the high and the low cult of the Blakean realm. The opening exhibit, Always in Paradise: A William Blake Chrestomathy, featured three walls covered with nineteen examples of Blake’s art, including a rare and richly colored tempera painting from 1799, The Virgin Hushing the Young John the Baptist, a preparatory wash drawing for The Complaint of Job (c. 1785), and the earliest known suite of prints of Dante’s Inferno, comprised of seven copper engravings from 1838.

“Nobody has ever done a show like this, as far as I know, in the United States or in England,” said Windle.

Behind the gallerist’s desk is a sampling of Blake’s illustrated literature, editions of Gates of Paradise and Songs of Innocence, which sit alongside other Blakean merchandise: mugs, stick-on art tattoos, and tarot cards. Indeed, as the title of this show proclaims, the gallery hopes to be useful in elucidating all things Blake.

For Windle, the art gallery is a natural extension of his rare book business. Blake was, after all, a poet, painter, and printmaker, and can be credited with creating the first artists’ books in the late 1700s. An artist and a craftsman, even a distributor, Blake engraved, printed, bound, and peddled (unsuccessfully) his own work. He was distinctly nonconformist, and claimed to have ghostly hallucinations that directly influenced his “illuminated” works. He died penniless, admired by a small group of fellow artists that called themselves “the Ancients.” 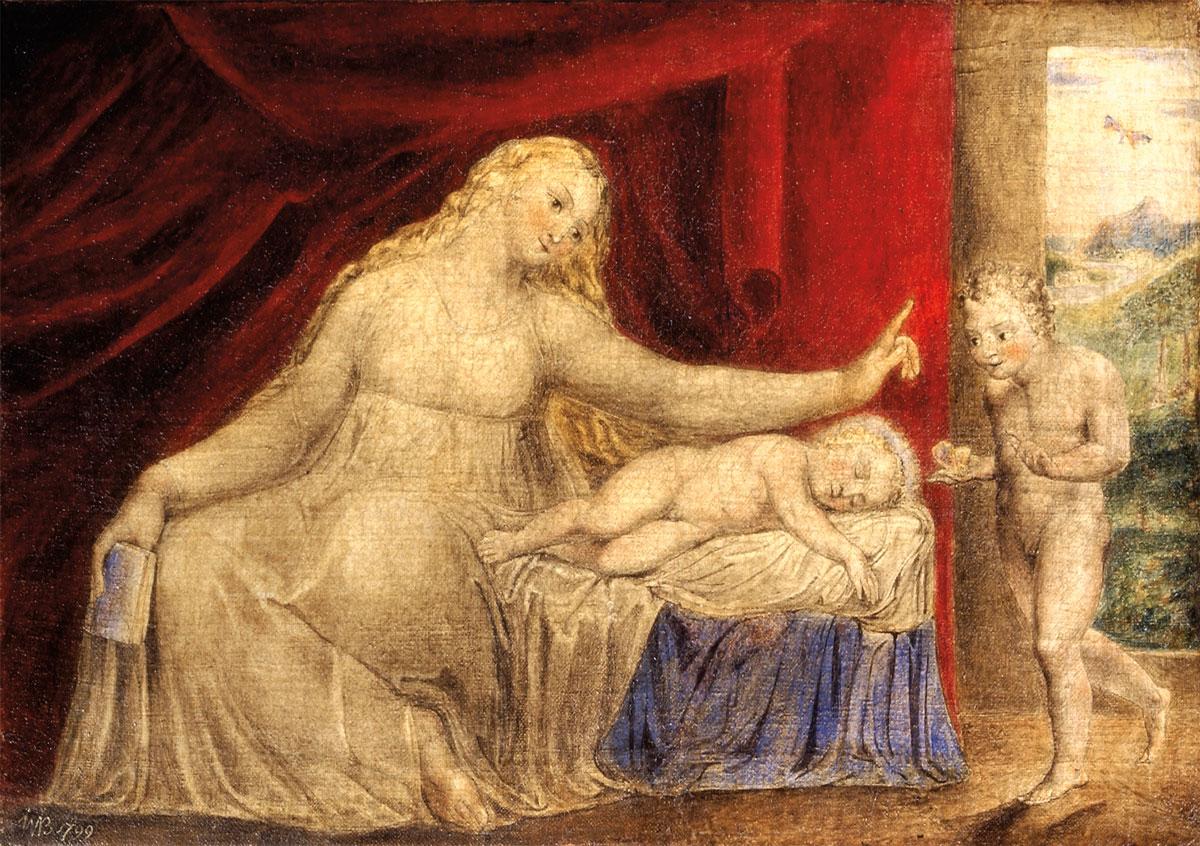 William Blake, The Virgin Hushing the Young John the Baptist, 1799. Executed in “pen and ink and tempera on paper on linen, laid down on canvas,” few like it remain in private hands. 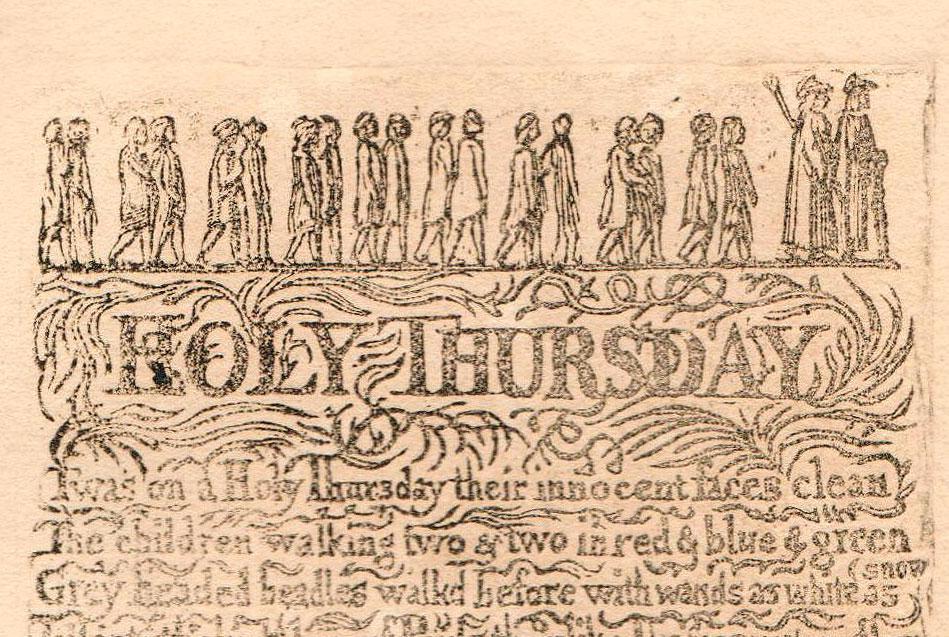 “Holy Thursday” plate from Songs of Innocence. A single sheet, relief etching, printed in black on wove paper. According to the William Blake Gallery’s catalogue, “This is the earliest impression of an illuminated plate printed by Blake ever offered for sale.” 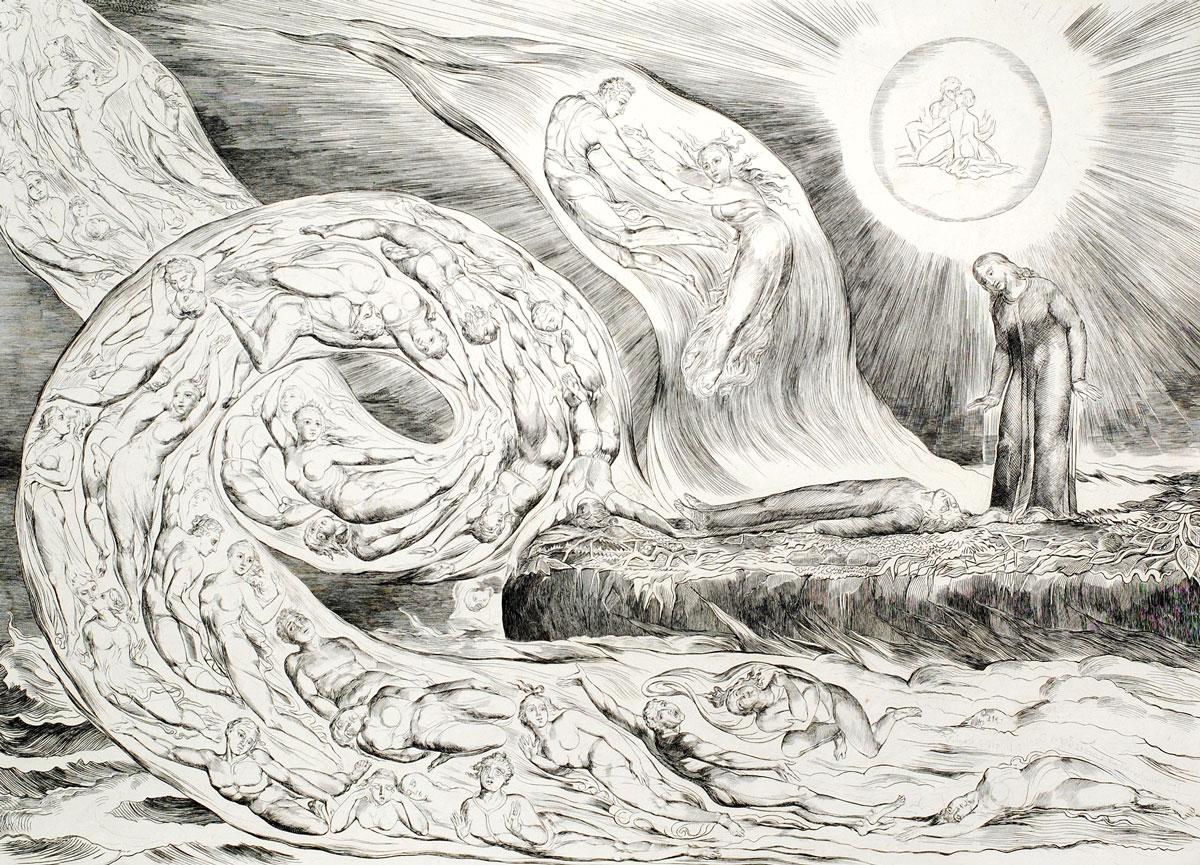 “The Circle of the Lustful: Paolo and Francesca,” often called the “Whirlwind of lovers,” is one of seven copper engravings conceived by William Blake to illustrate Dante’s Inferno (London: printed for John Linnell, 1838).

“Blake has been supporting me my entire life,” said Windle, who has been in the rare book business for more than forty years, selling Blake’s books and the occasional work of art for most of that time. For years, he said, sublime pieces of art had come through the shop, but he never had a dedicated space for them. Recently, after acquiring the Blake archives of Trianon Press, Windle realized that he had millions of dollars worth of Blake material and nowhere to exhibit it. A venue became available down the hall from his bookshop, and Annika Green, who had been working for Windle on his rare book catalogues, signed on to become the new gallery’s director.

The gallery has a 1,000-plus item catalogue, which includes art, books, and prints for sale at various price points. One of Windle’s goals is to make Blake affordable to all, and he loves to turn young people on to Blake: “They get older, they make money, they remember, they come back.” The gallery will bring in new clientele with the aim of enhancing both businesses. Windle hopes that art enthusiasts, who would not otherwise have ventured into an antiquarian bookshop, will now find their way to him.

Green said she believes that we are seeing a resurgence in Blake’s popularity in contemporary culture, and referred to the fact that Kit Harington (the Emmy-nominated actor who plays Jon Snow in Game of Thrones) dramatically recites Blake’s poem, “The Tyger,” in a swanky 2016 car commercial promoting the release of the Infiniti Q60. It also bears noting that both Patti Smith and recent Nobel Prize winner Bob Dylan have written songs inspired by Blake: Smith’s “My Blakean Year,” and Dylan’s “Every Grain of Sand.”

Always in Paradise was on view through the spring of 2017. After this exhibit, Windle displayed works by emerging and established artists who are responding to Blake. For example, photographer Joel-Peter Witkin has created an homage to Blake’s Songs of Innocence and Songs of Experience. The idea of presenting new work that dovetails with Blake’s mystical spirit delights both Windle and Green. With a five-year lease on the space and plans to put together four shows a year, mixing their inventory with the work of Blake’s circle (including Henry Fuseli) and with modern complements, the gallery has plenty of fertile territory and material to keep us all enraptured.

Gabrielle Selz is the author of Unstill Life: A Daughter's Memoir of Art and Love in the Age of Abstraction. She has also written a biography of the painter, Sam Francis.