On the Road with Stephen Shore

American and Photographic History on Display at the Museum of Modern Art. 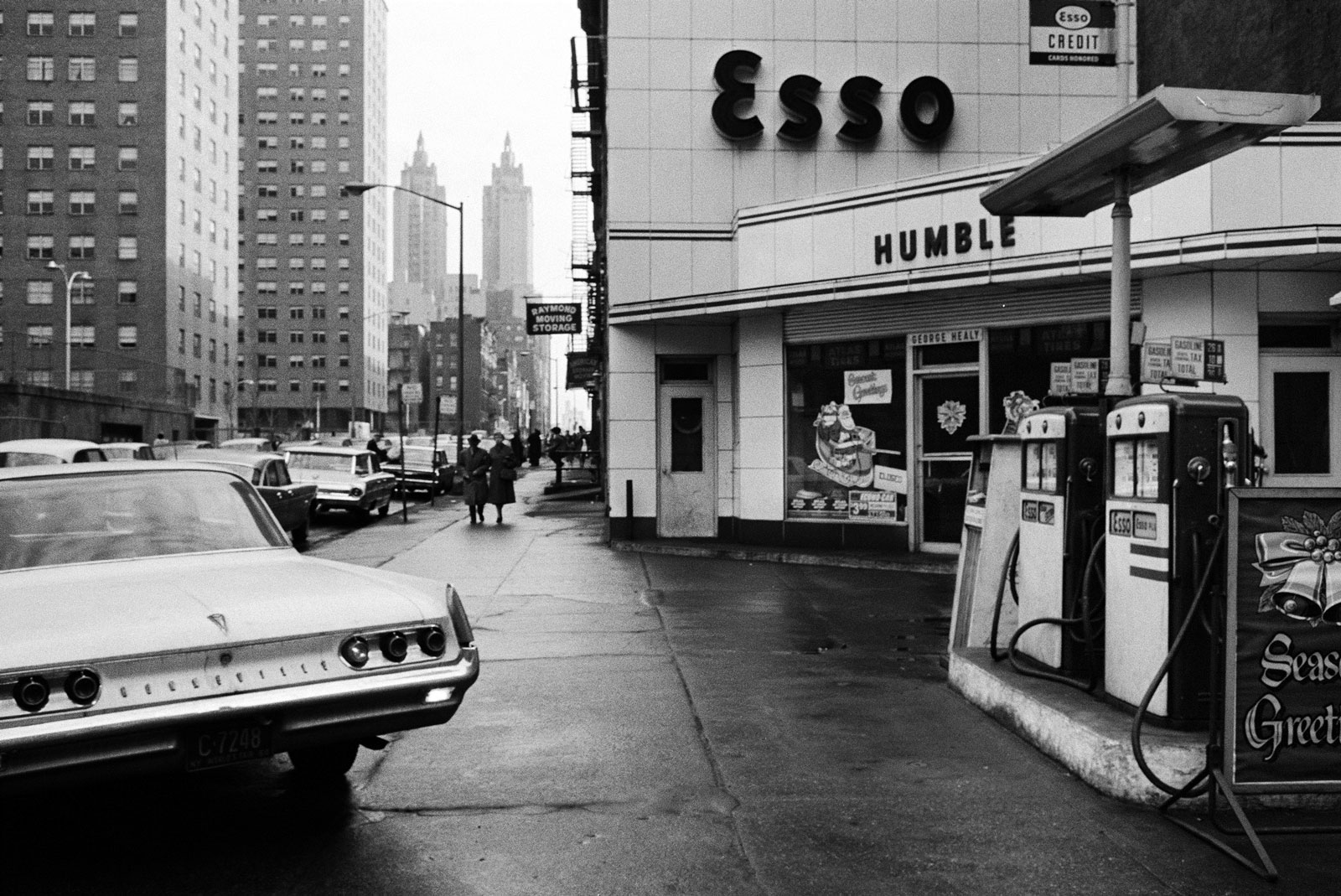 American and Photographic History on Display at the Museum of Modern Art.

“Good photographs,” Stephen Shore said recently at MoMA, “have visual problems they want to solve. Good pictures are a byproduct; they are not the motive of photography.” This eponymously titled retrospective recounts five decades of attempts to solve photographic problems, with work in nearly every possible photographic medium, encompassing straight black and white, the color snapshot, the picture postcard, the stereograph, and Instagram.

Shore sold his first photographs when he was 14 to Edward Steichen, then MoMA’s curator of photography, in 1962. As a young filmmaker, he met Andy Warhol and subsequently photographed at Warhol’s studio, the Factory, in the mid-1960s. His precocious beginnings lead to his first solo show at the Metropolitan Museum of Art at 23.

He is best known for his road-trip color photographs, Uncommon Ground, made between 1973 and 1982, which elevated color photography to a fine art. It’s easy to forget, in light of the rise of the Dusseldorf School, particularly Andreas Gursky, Candida Höfer and Thomas Struth, how radical the large-format color photograph once was. This show includes some of the most iconic images from that series, but what it does best is capture the omnivorous quality of Shore’s visual concerns.

At key junctures Shore’s work has been embraced as new, often as part of a pivotal curatorial construct. His work was included in the influential New Topographics show in 1975 that also included Robert Adams, Lewis Baltz, Bernd and Hilla Becher, among others. Shore’s work has also been essential to elaborating the possibilities of the New Color Photography, alongside William Christenberry, William Eggleston, and Joel Meyerowitz. 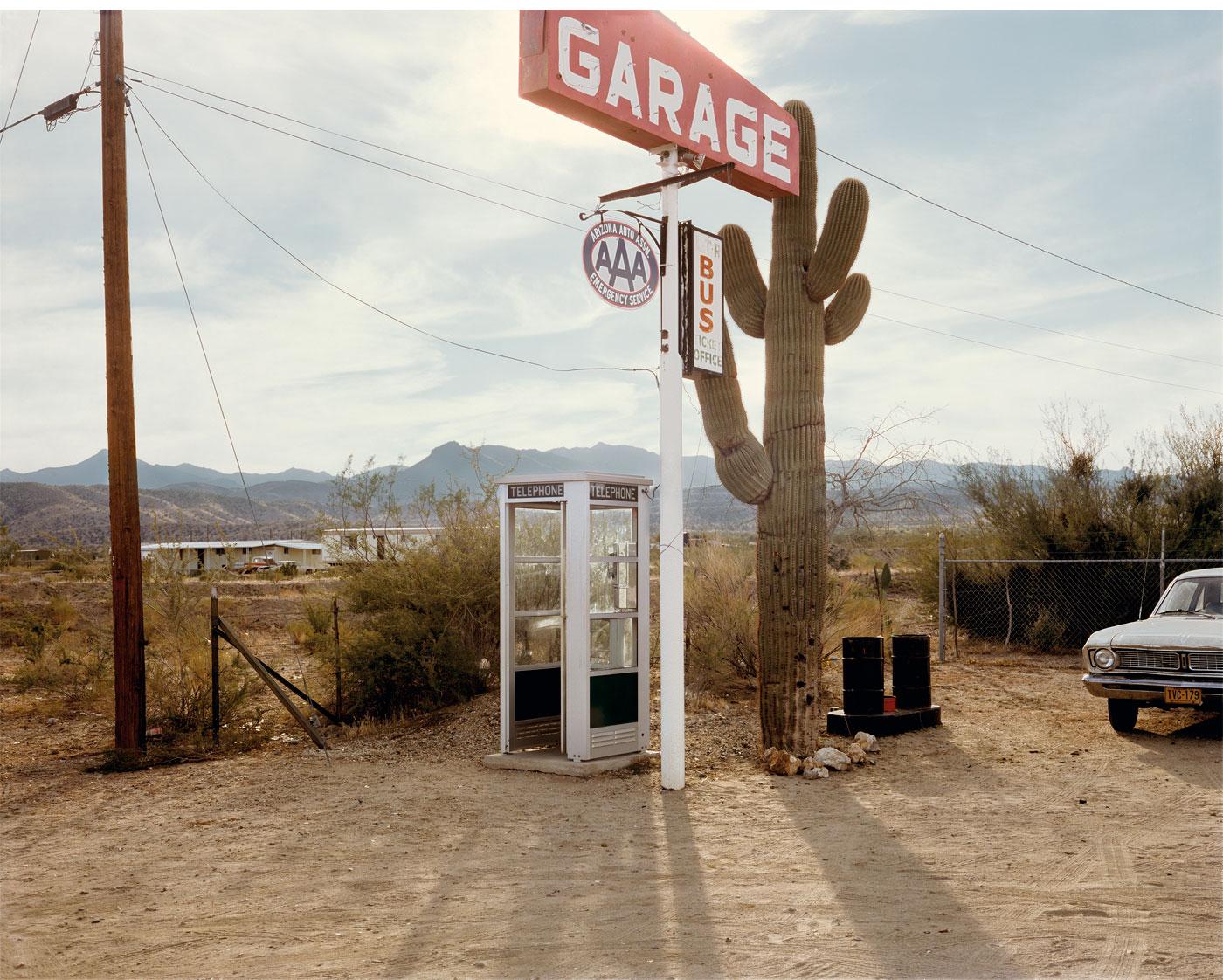 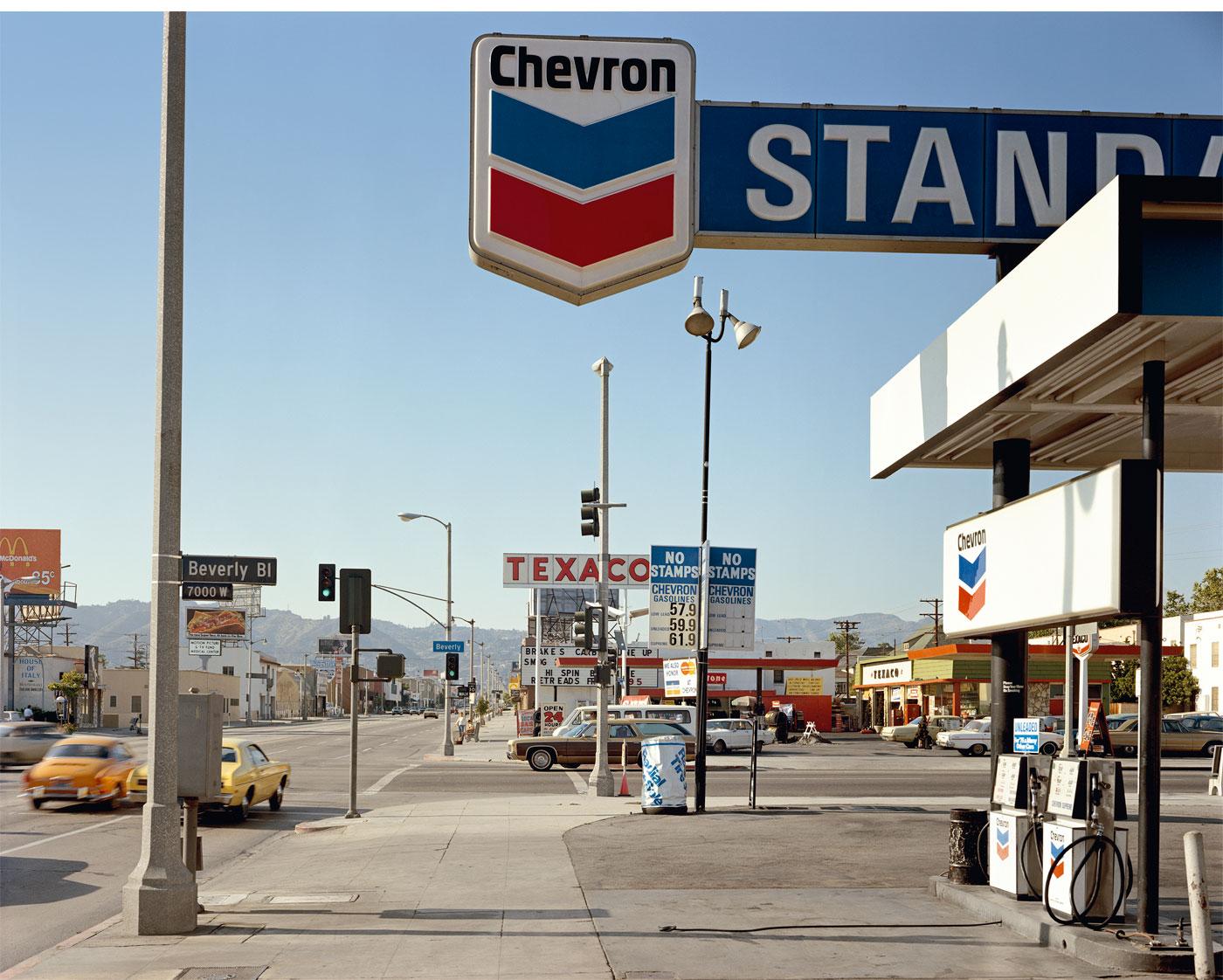 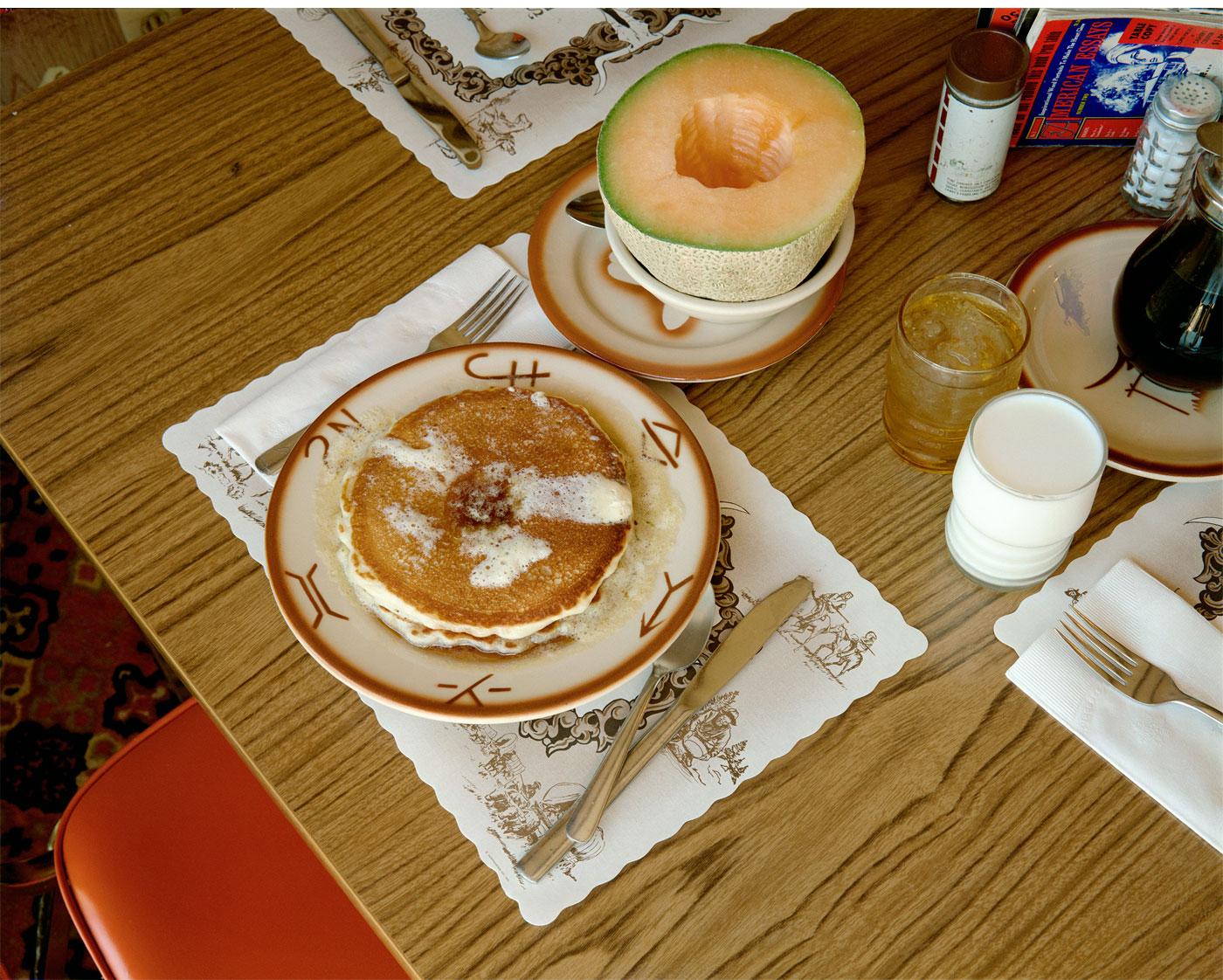 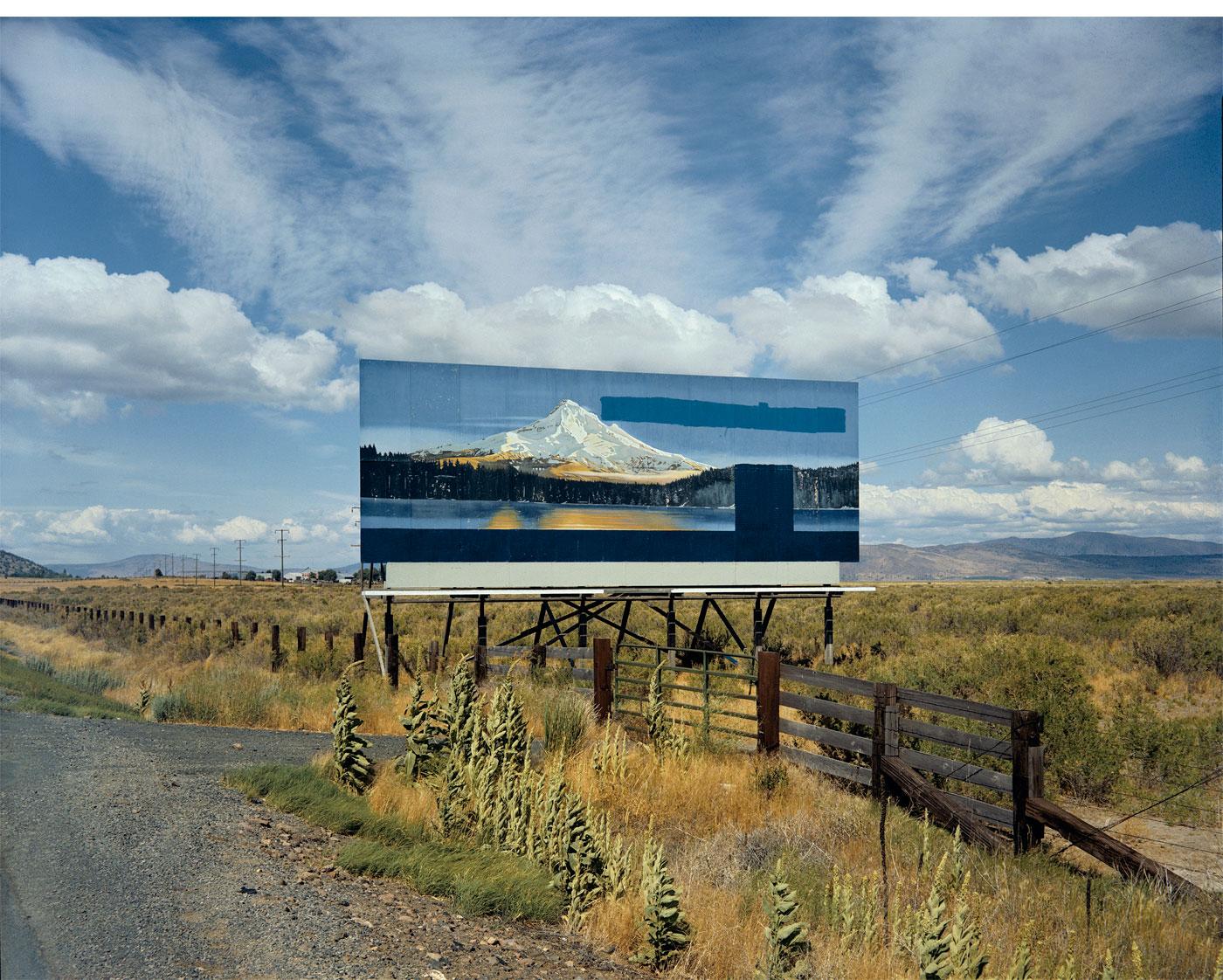 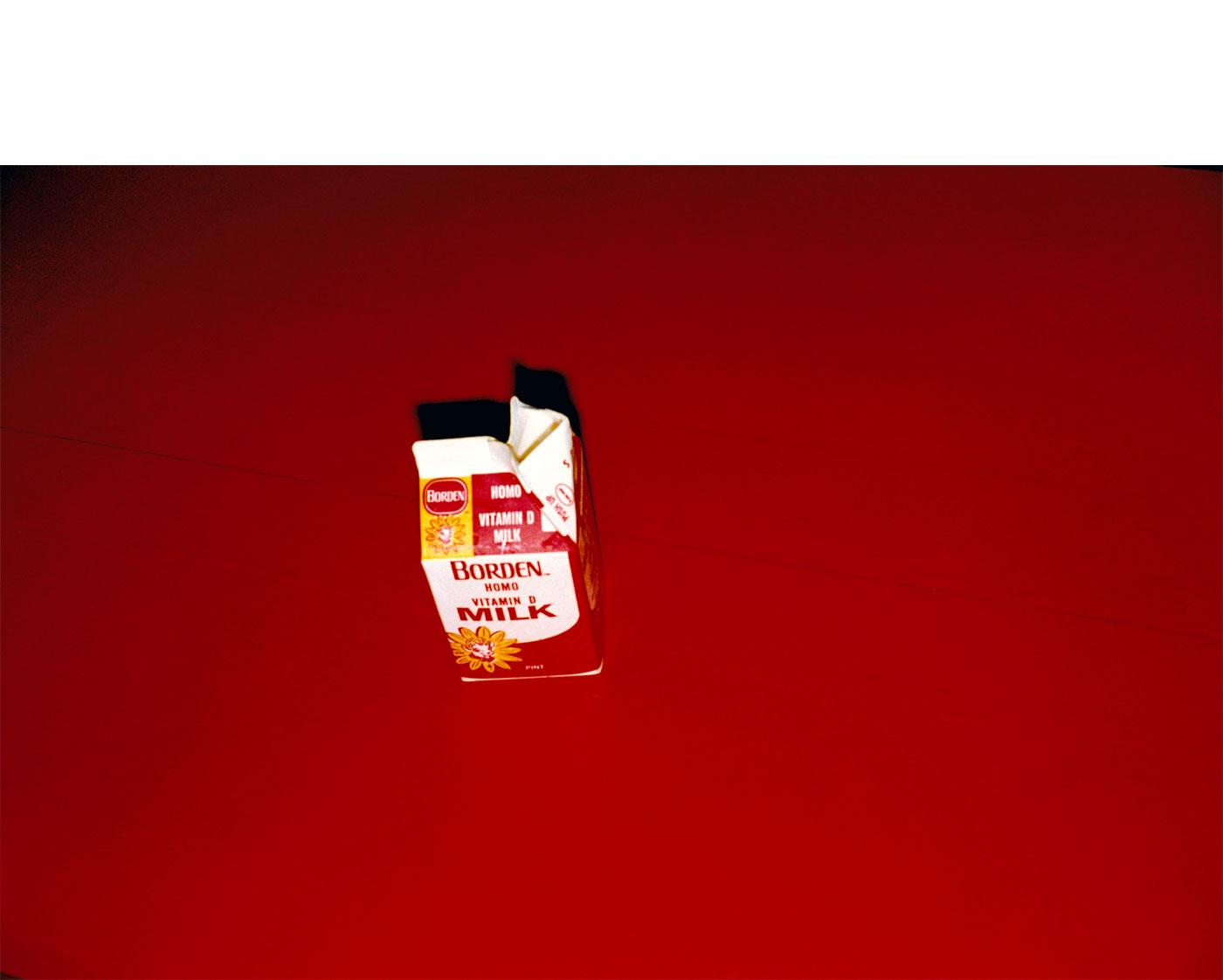 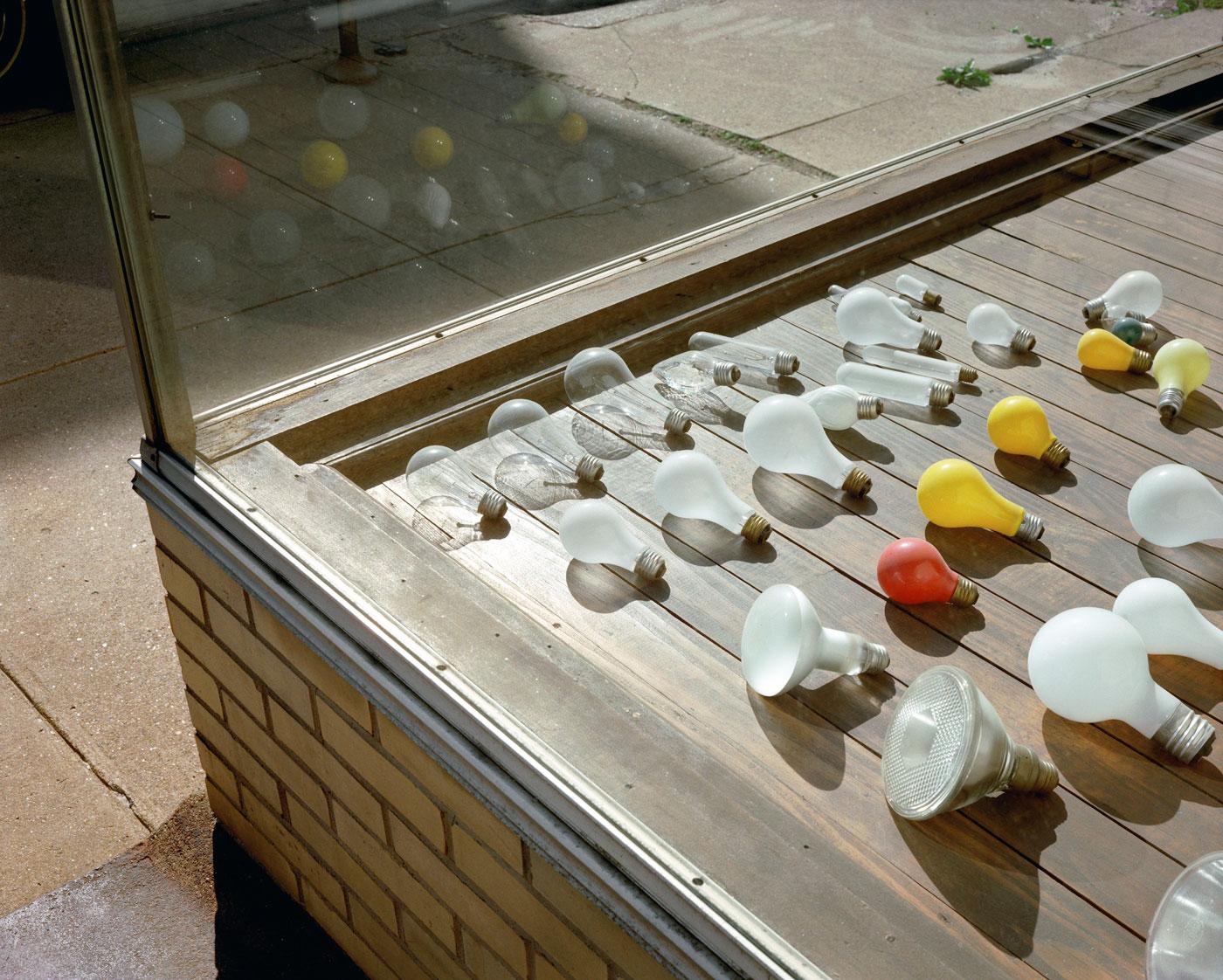 It may be more accurate to say that Shore’s work has never been not new, since, as MoMA curator Quentin Bajac writes in his catalog essay, Shore’s career is best characterized by his “penchant for reinvention.” Shore’s work literally moves: much of it is the product of road trips, but what this exhibit makes excitingly clear is that his work has always been persistently, restlessly mobile in technique and execution. He has shot with a child’s snapshot camera shaped like Mickey Mouse’s head (called the Mick-a-Matic), a 35mm, a 8-by-10 view camera, and a camera phone. He’s used everything from the 8-by-10 print to the 3-by-5 inch snapshot to the picture postcard to the slide carousel to the stereoscope to display his pictures.

In “4-Part Variation” he arranges 3 versions of a photograph of a car, each with a different focal length, into a 4-by-4 grid. The relative proximity of the camera to the car becomes a sign of something, but it’s unclear what that is. The photographic sequence is supposed to convey a narrative, but instead Shore destabilizes it. “July 22-23, 1969” presents a 7-by-7 grid of photographs taken at half-hour increments over the course of a day. Time, in the tradition of Edward Muybridge, is marked, but it’s also a problem to be worked out through various visual exercises, or études, with the camera.

Since the 1970s Shore has worked at the edge of one of 20th century photography’s central problems, the high-low divide, where the fine art begins and the vernacular ends, where the conceptual meets the documentary.

Since the 1970s Shore has worked at the edge of one of 20th century photography’s central problems, the high-low divide, where the fine art begins and the vernacular ends, where the conceptual meets the documentary. The exhibit shows some crucial pieces that have hardly been seen since then.

“All the Meat You Can Eat,” re-exhibits Shore’s brief 1971 show, composed almost entirely of found photographs collected with Weston Naef, then a curator at the Metropolitan Museum of Art, and Michael Marsh, whom Shore had met through the Factory. The assemblages of photographs run the vernacular gamut: crime scenes, postcards, pornography, money shots, pets, pinups, propaganda, and commercial images of all kinds, even a stray Muybridge. The combination of the found images and the vernacular, interspersed with Shore’s own photographs taken with the Mick-a-Matic, were confounding at the time. Now they read as prescient.

Stephen Shore is on exhibit at the Museum of Modern Art, New York, through May 28, 2018. Click here for more information.

For American Surfaces, Shore used a 35mm Rollei to record his daily life for a year-and-a-half. The resulting installation is part diary part inventory, an extended experiment in marking time, told by the Kodacolor snapshot. After approximately 190 images from the series were shown at Light Gallery in 1972, the installation was all but forgotten, only to be rediscovered in 1999. The version on exhibit here is a variation on the original; it reads like the prequel to Uncommon Places. It’s less polished and the genealogy of influence from Ed Ruscha and the Bechers to Warhol and Evans is more visible.

Speaking at MoMA, Shore observed his persistent interest in attention, communication, and the small moment, when “the experience of the world is more vivid.” After experimenting with such a vast array of photographic media, it seems almost pre-ordained, given his interest in concentrated attention and communication, that beginning in 2014 he would turn to Instagram. His photographs these days are square instead of rectangular, offering more of a diary and real-time recording than the snapshot ever could. Talk about communication: Over on Instagram he racks up likes by the thousands. Fans cum students sing his praises: “I'm always learning and interested in your approach. I'm always so intrigued in what catches your eye. @stephen.shore Learn so much.”