Laying to Rest the
Crimes of the Past 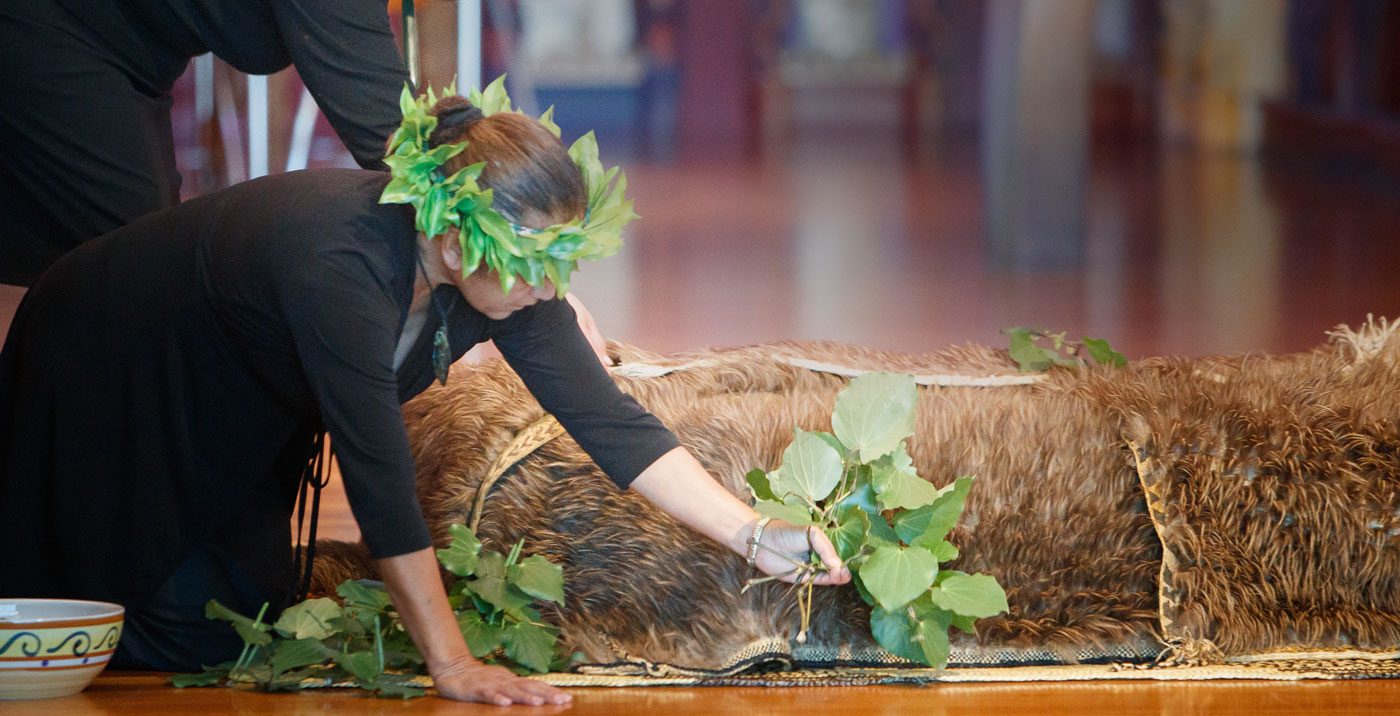 Kate Whitley, Te Papa.
Covering the tupuna (ancestral remains) with kawakawa leaves.
As museums increasingly question the practices of the colonial past, human remains that were once prized collectibles are increasingly an anachronistic embarrassment.

As museums increasingly question the practices of the colonial past, human remains that were once prized collectibles are increasingly an anachronistic embarrassment. 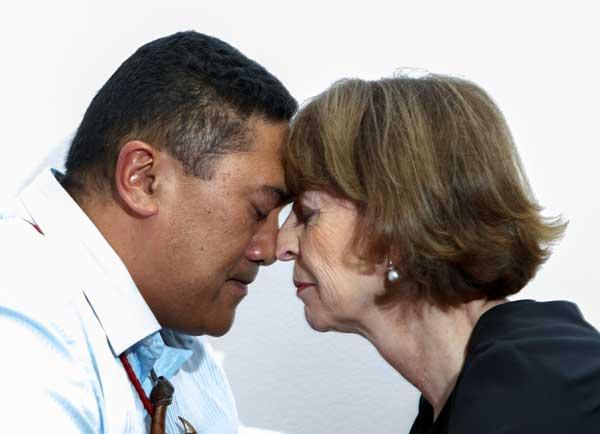 “I cannot undo the wrongs of the past, but I have done everything I can to ensure that your ancestor is removed from an anonymous collection to have his human dignity returned.”

A Maori delegation wrapped the tattooed skull of a warrior ancestor and laid it on a feathered cloth. In a ceremony accompanied by traditional mourning songs and “waiata” music from the Modern Maori Quartet, tribal elders told the warrior that he was finally returning home. The skull had spent more than a century in the German city of Cologne’s ethnological museum.

“I cannot undo the wrongs of the past,” said Cologne mayor Henriette Reker, who pressed noses with the delegation in the traditional Maori greeting. “But I have done everything I can to ensure that your ancestor is removed from an anonymous collection to have his human dignity returned.”

The Museum of New Zealand Te Papa Tongarewa, based in Wellington, estimates that there are still about 600 Maori skulls in western museums, most in Europe. The Karanga Aotearoa Repatriation Programme, set up by the New Zealand government in 2003, provides research and transport to return remains to the relevant communities. The Maori and Moriori peoples, who determine their final resting place, believe that this return to their homelands allows the dead and their living descendants to retrieve their dignity.

The Cologne skull is among thousands of scalps, shrunken heads, mummies, flutes made of bones and other human remains acquired by European anthropological museums and university collections around the world in the 19th and early 20th centuries. Many were unearthed, stolen, or purchased by explorers and “race researchers” who brought them home.

But as museums increasingly question the practices of the colonial past, human remains like the Cologne skull, once prized collectibles, are increasingly an anachronistic embarrassment.

For many museums, displaying such items has become a taboo—the Te Papa museum, for instance, prohibits exhibiting remains. Those that choose to do so can find themselves under fire: Vienna’s newly opened Weltmuseum (World Museum) faced an outcry over the presentation of a severed head from Brazil. 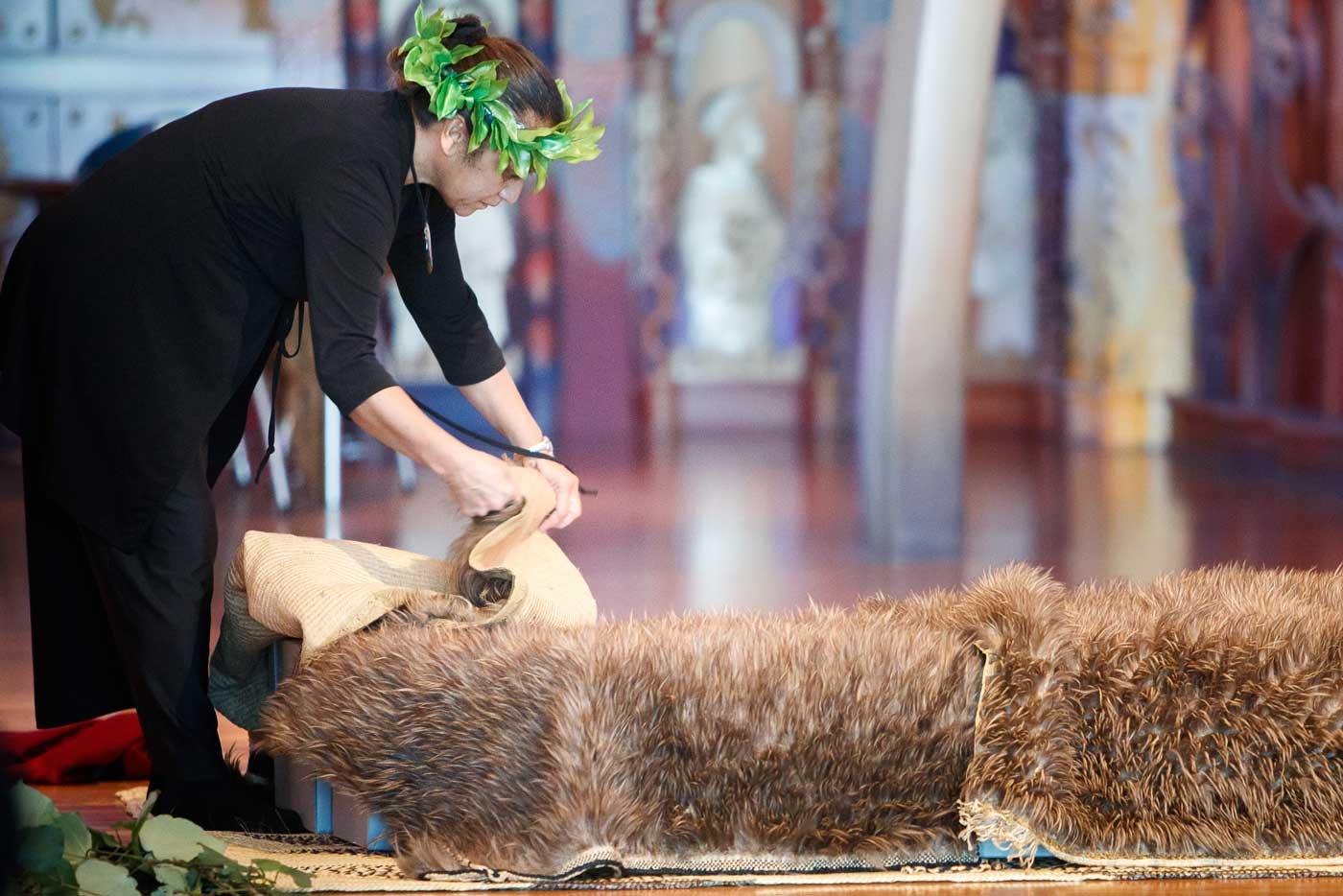 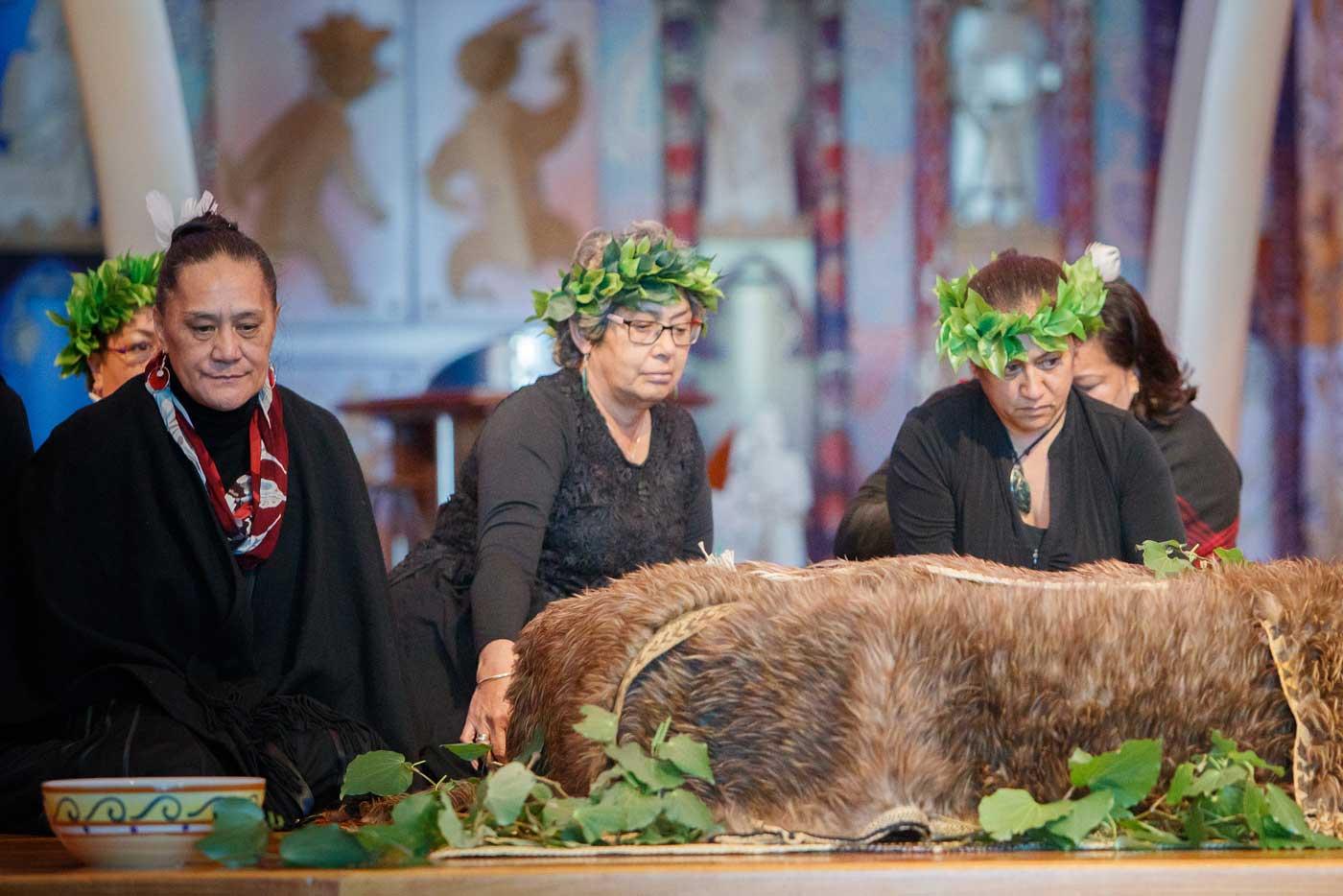 Part of the funeral rites, or tangihanga, includes keeping the tupuna warm 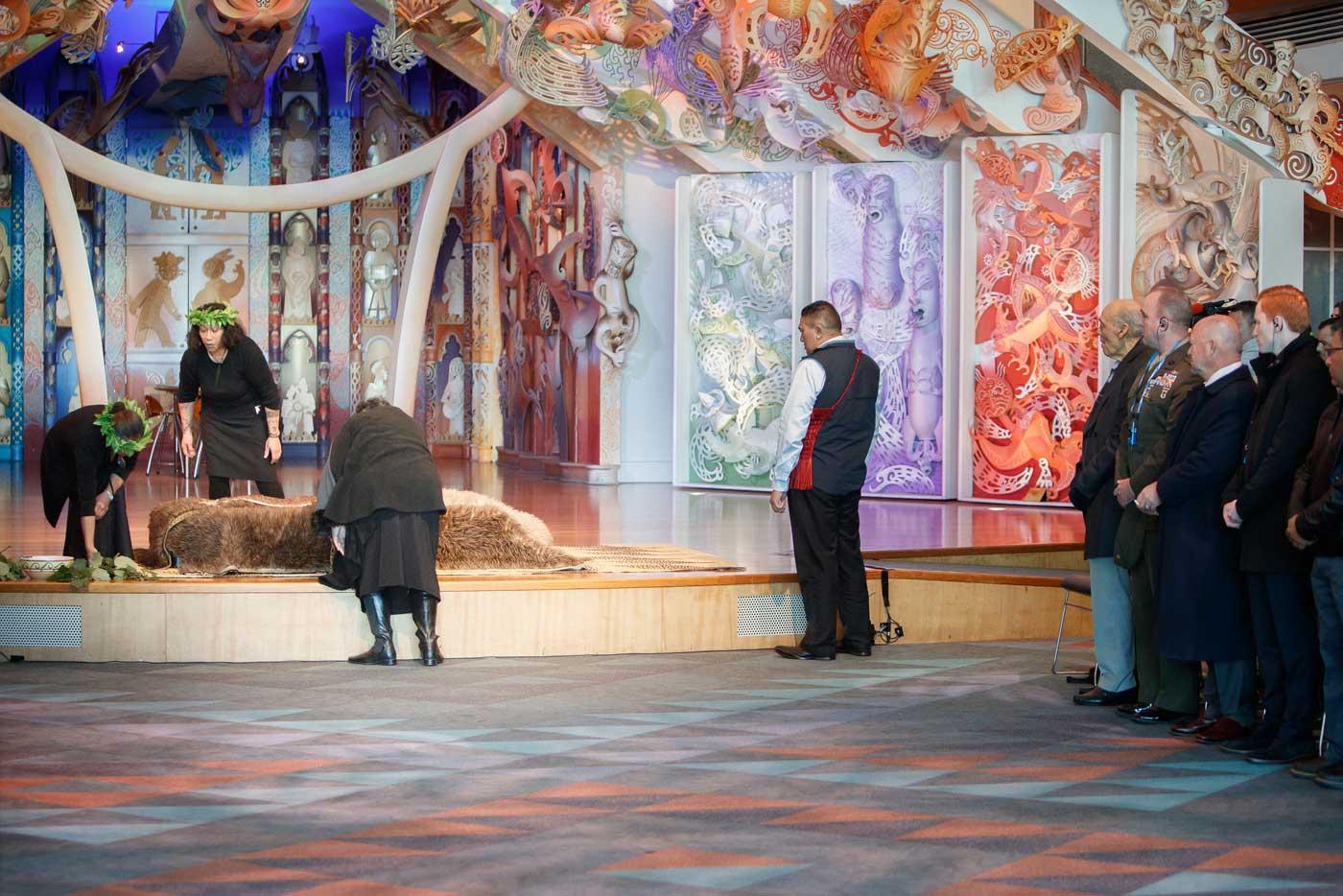 Final resting on the atamira of Hono ki Hawiki, the stage of the traditional Maori meeting house 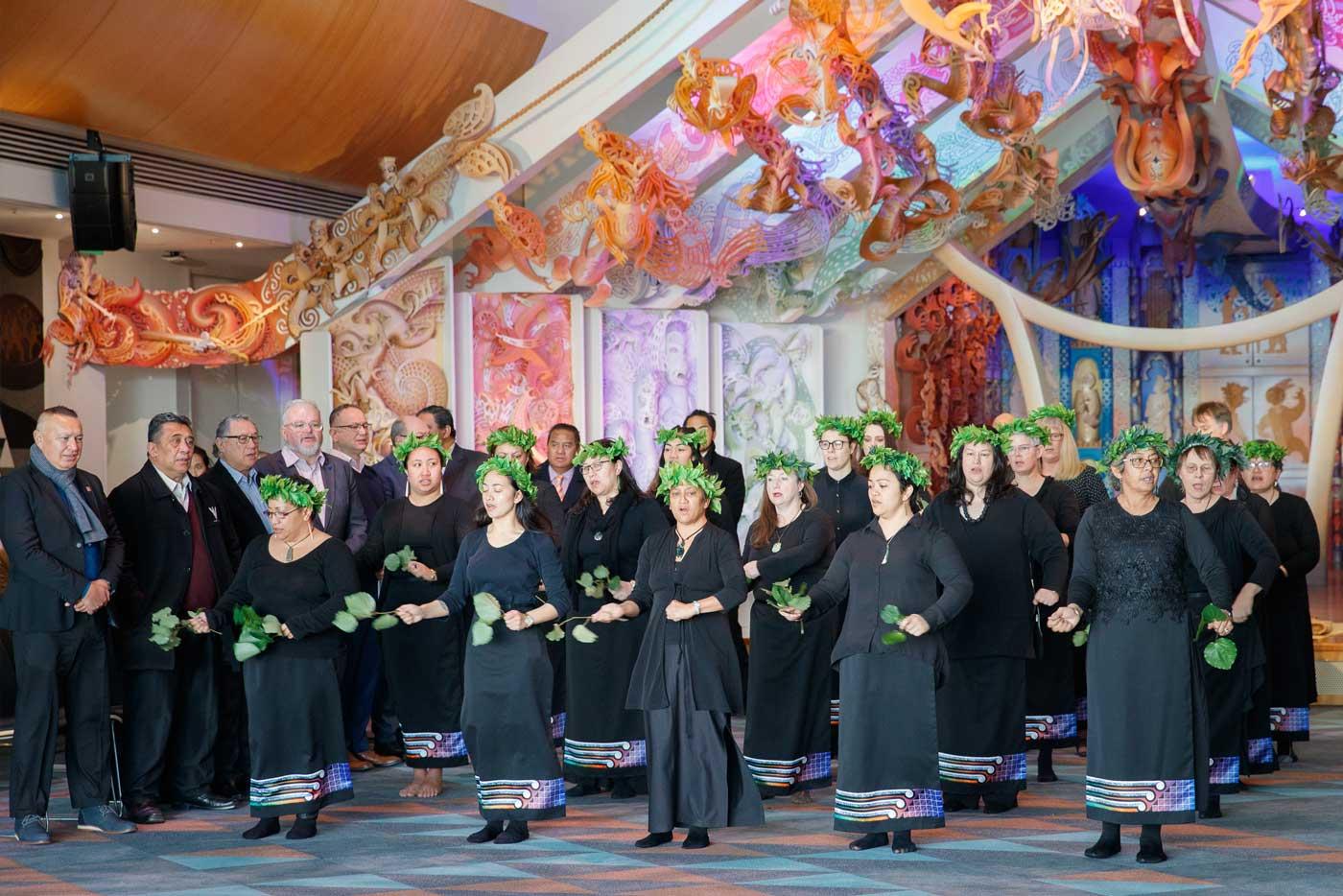 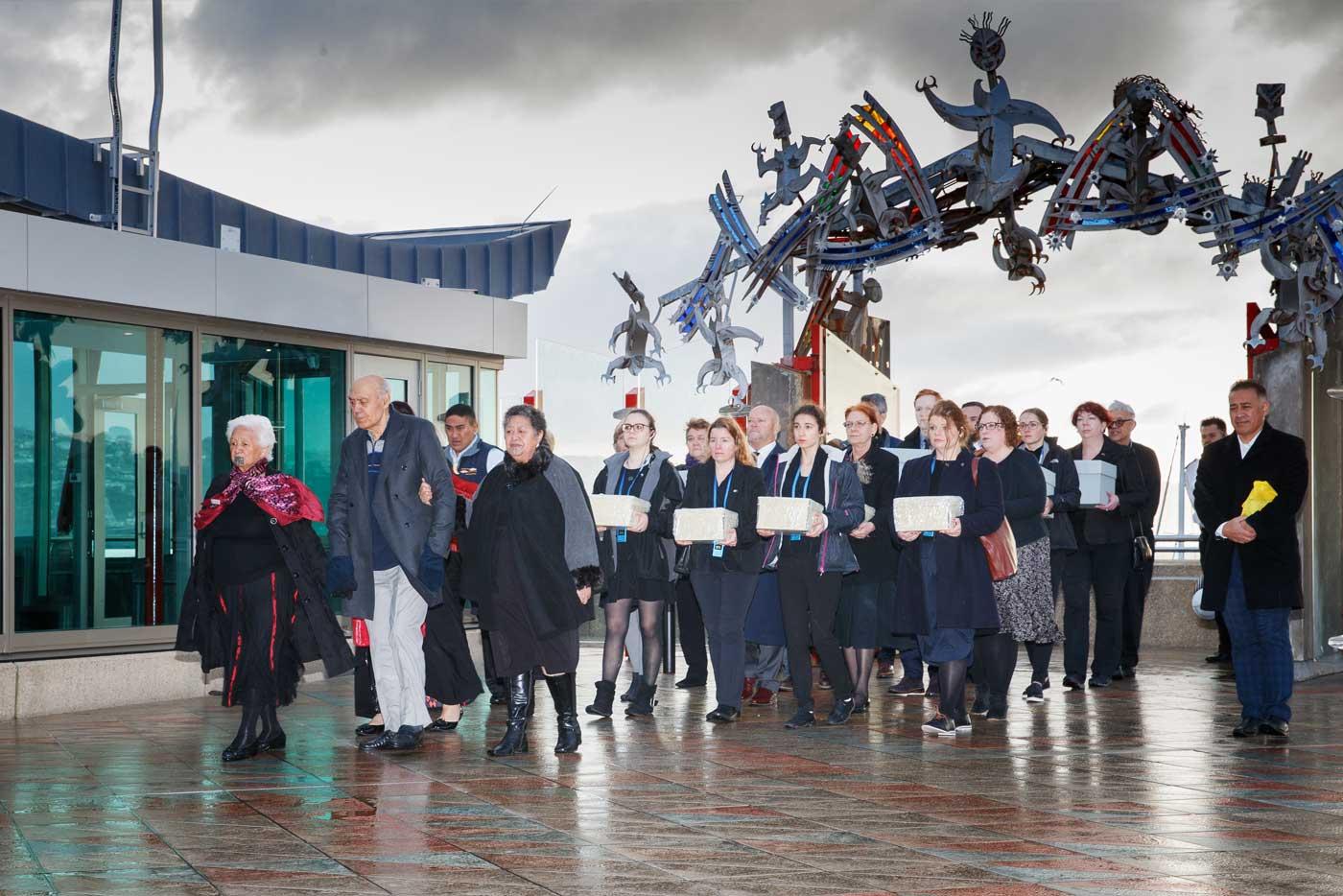 Pallbearer procession at the repatriation ceremony in New Zealand 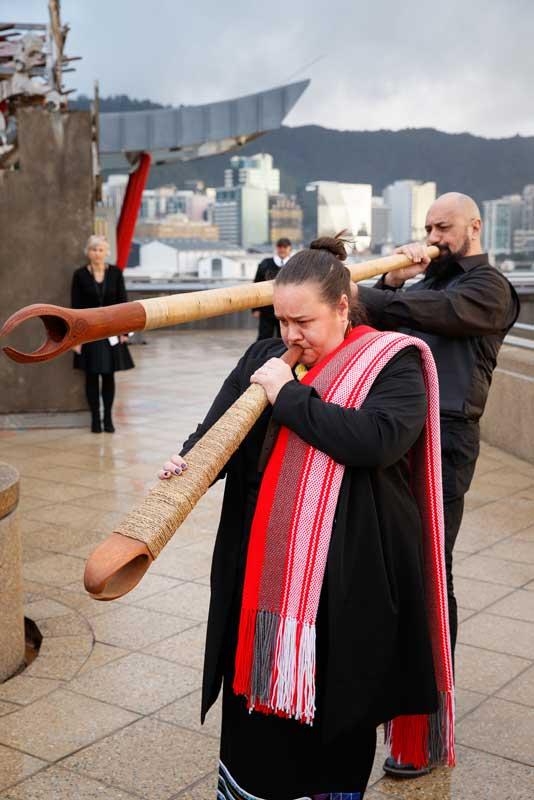 “The repatriation process takes time, and is about building ongoing and trusting relationships with our colleagues in international institutions,”

Though the International Council of Museums published guidelines on how to handle human remains in its ethics code back in 2004, the discussion has taken time to turn into practice. Treatment of human remains has come to the fore in the wider context of a debate that has erupted over the repatriation of colonial-era artifacts. French President Emmanuel Macron set the tone last in 2017 when he promised to return artworks to Africa from French museums. German museums have taken up the baton in addressing the colonial past–and returning human remains, where possible, is the top priority.

Repatriations are taking place with growing frequency: in October 2017, for instance, the Dresden State Art Collections returned bones taken more than a century ago from graves in Hawaii against the wishes of the indigenous population. The Karanga Aotearoa Repatriation Programme has so far returned more than 400 ancestral remains to New Zealand from Australia, Austria, Canada, France, Germany, Sweden, the U.K. and the U.S.

The story behind the journeys these skulls took is grisly and violent. The Maori traditionally preserved the heads of esteemed male relatives, famous chiefs and enemies felled in war. The first such mummified skull came to Europe in 1771. A collecting frenzy followed, with tattooed skulls exchanged for European weapons.

As the trade in skulls escalated, some Maori began to tattoo the skulls of slaves, and collectors started to pick out living people whose skulls they wanted to possess. The number of attacks on heavily tattooed people spiraled, leading to a prohibition of the trade in 1831.

But an illegal market persisted, and many skulls found their way into European museum collections. The Cologne skull, for instance, was purchased by the director of the Rautenstrauch Joest Museum in 1908.

“The repatriation process takes time, and is about building ongoing and trusting relationships with our colleagues in international institutions,” says Arapata Hakiwai, Maori Co-leader at the Te Papa museum. “Not all are willing to start the conversation, but this is changing as museums come to terms with what they have in their collections.”

Oliver Lueb, the deputy director of the Rautenstrauch Joest Museum, said the museum has no repatriation program of its own, but responds to individual claims. The research required to identify the origins of all the human remains in the collection would be too much for the museum’s resources, he says. “For us, repatriation depends on the perspective of the country of origin,” he says.

Investigating human remains can be very painstaking work, but identifying their origin is a precondition to repatriating them. Museums don’t generally have provenance records. The Prussian Cultural Heritage Foundation, which oversees Berlin’s museums, is conducting research on more than 1,000 skulls in the collection of the Museum of Early History and Pre-History. The foundation inherited the skulls in 2011—covered in mold and in terrible condition—from the Charité hospital in Berlin.

It was known that these came from the German colony Deutsch-Ostafrika, a region that straddles today’s Rwanda, Tanzania, Burundi and Mozambique. Though they were labeled as originating from Tanzania, research has since shown that most probably came from Rwanda.

It took almost six years to clean and preserve them. Since 2017, a two-year project involving four employees, funded by the Gerda Henkel Foundation, is carrying out research on the remains. Researchers have set up a database, established contact with authorities in the relevant countries, and begun combing foreign archives to try to determine exactly where and under what circumstance the remains were taken.

“We started this project because we want to atone for the crimes of the past,” says Hermann Parzinger, the president of the Prussian Cultural Heritage Foundation. “It is extremely complex. We are trying to establish where they are from in order to be able to give them back.

“After that, we have 1,500 skulls from the Pacific to investigate. It is not just a problem for Berlin, but for museums across Germany.” And not just for museums in Germany, but across Europe and America too.