To the Hoop: Basketball and Contemporary Art 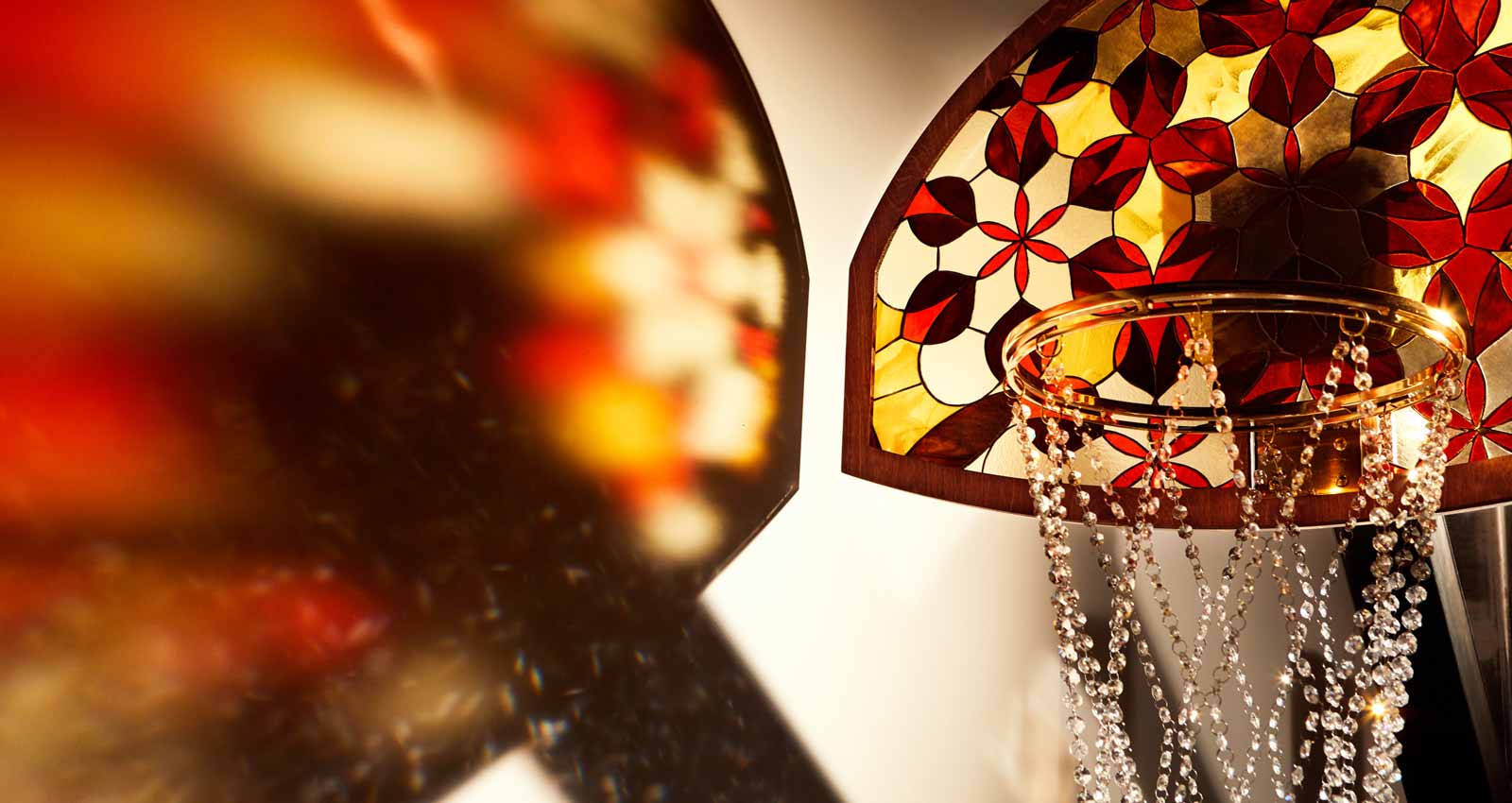 Victor Solomon, photo by Geordy Pearson, courtesy of the artist
Victor Solomon, Church (detail), 2019.
How the popular sport serves as a potent metaphor for social concerns 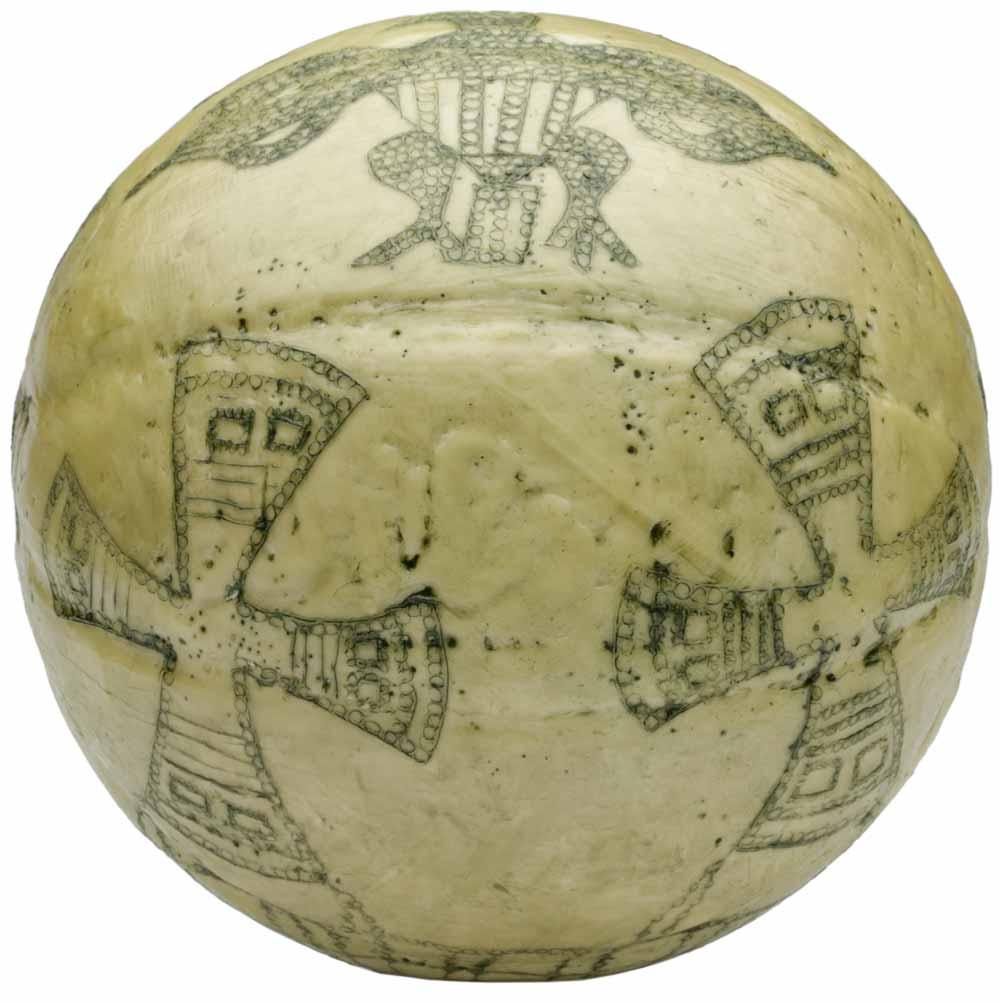 “The idea of the game offering a means to acceptance is striking.”

At first glance, basketball and art may seem like an unlikely combination. But when Emily Stamey was a graduate student at the University of Kansas—the coaching home of the game's Canadian inventor, Dr. James Naismith—she studied two basketball pieces: Jeff Koons' One Ball Total Equilibrium Tank (Spalding Dr J Silver Series), and Higher Goals by David Hammons. “I was struck by what a compelling comparison they made, and the seed of an idea for this show was planted. I've been mentally ‘collecting’ basketball artworks ever since,” shares Stamey, now curator for the Weatherspoon Art Museum at the University of North Carolina at Greensboro.

The resulting exhibit is To the Hoop: Basketball and Contemporary Art. An edition of the same Koons piece that first inspired Stamey was on display. A photograph by Hammons, Money Tree, is also included.

Through the artworks she has compiled, the curator reveals three complex conversations, including race and gender issues as well as metaphysical themes. Artists juxtapose opposites and strip down stereotypes to reveal layers, all focused through the lens of this world-famous sport. Stamey and participating artists Gina Adams and André Leon Gray shared some of their insights with Art & Object.

“There are so many social issues that the artists are addressing,…that's where the complexity comes in,” explains Stamey. She points out that in 2018, 56 percent of NCAA Division I players and 73 percent or more NBA players were African American. “Race looms large, but it is never the singular subject. …Hank Willis Thomas' Branded Head is about the commodification of black male bodies,…as well as the ways in which [we]…choose to brand ourselves.” In his video Practice, Mark Bradford attempts to play basketball in a cumbersome hoop skirt, exploring gender and racial stereotypes. “In part, it's a response to assumptions he faced as a kid that—because he is male, black, and tall—he should be a basketball player. But [the artist] also takes on the idea of endurance…,” explains Stamey.

Artist Gina Adams is of Ojibwa, Lakota, Irish, and Lithuanian ancestry. “When I was in graduate school, people would say…‘Native Americans never play basketball’ and ‘basketball is a male sport’…,” she shares. “From a Native American perspective,…if you work hard…you can get an athletic scholarship and a better education.” Rezball, a version of basketball very popular on reservations, even has its own set of rules. Adams points out that no matter where they come from, basketball players are accepted and instantly assimilated into popular culture. “They are seen as All American. This is extremely important…[because] though there are many native and mixed indigenous players, the actual count of Indigeneity…has never been counted by the NCAA or NBA.” (Adams recommends the Netflix series Basketball or Nothing for insight into native basketball.)

Adams points out that in 2010, Naismith’s Rules of Basketball sold at a Sotheby’s auction for $4.3 million dollars, illustrating that basketball has power. She believes in the power of art and the game to promote change for all cultures.

For her ceramic encaustic-coated basketball Honoring Modern Unidentified 27, Spirit That Remains, Adams made a mold of an NBA regulation ball. “Each basketball and the designs I scribe into their surface[s] come directly from the research that I conduct in museum archives.” The eagle design on top, a symbol for power and strength being given back to the people, is Adam’s interpretation of several pieces of beadwork. The end result looks like an archeological relic or ancient spiritual object. 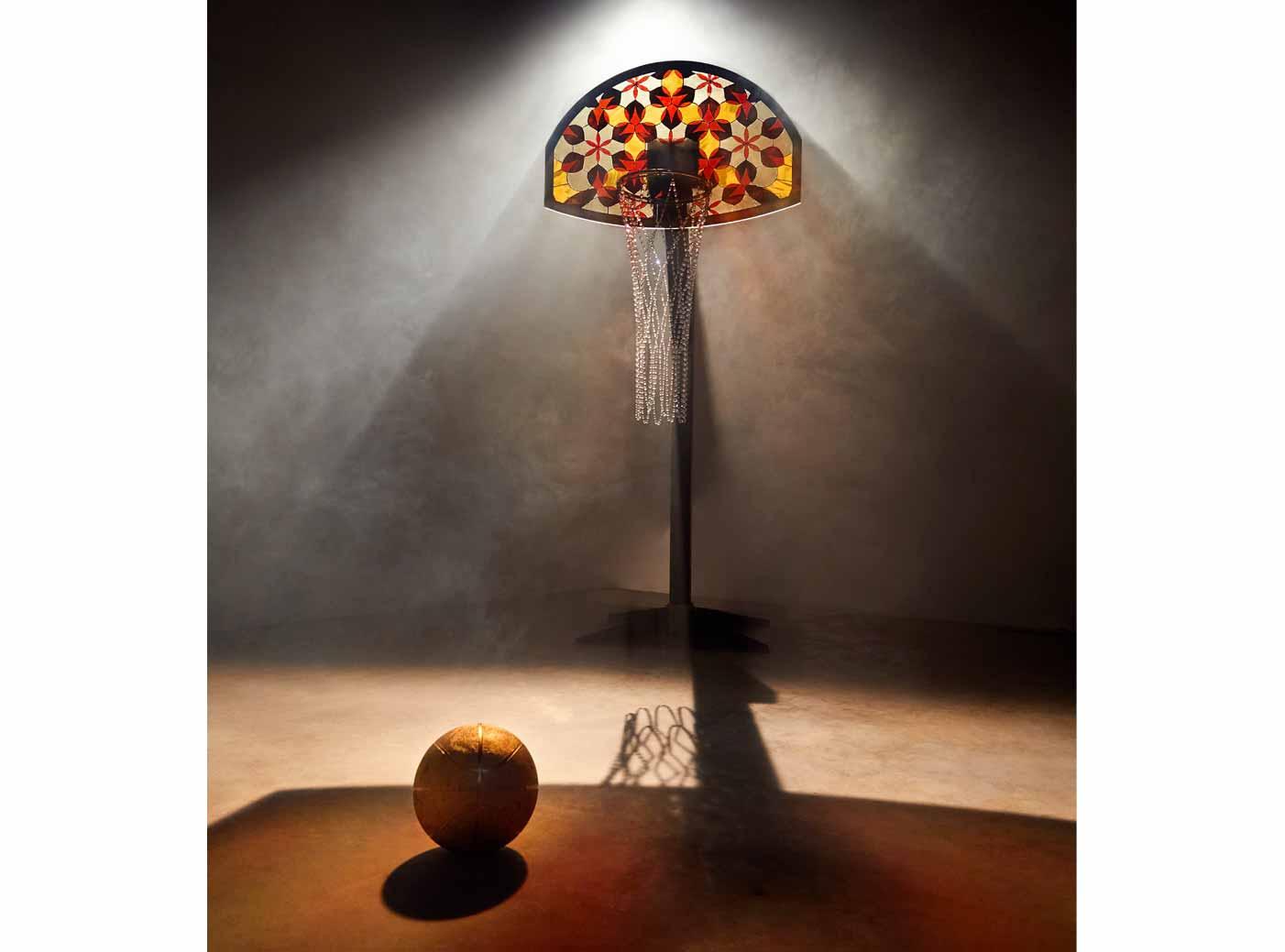 © Victor Solomon, photo by Geordy Pearson, courtesy of the artist. 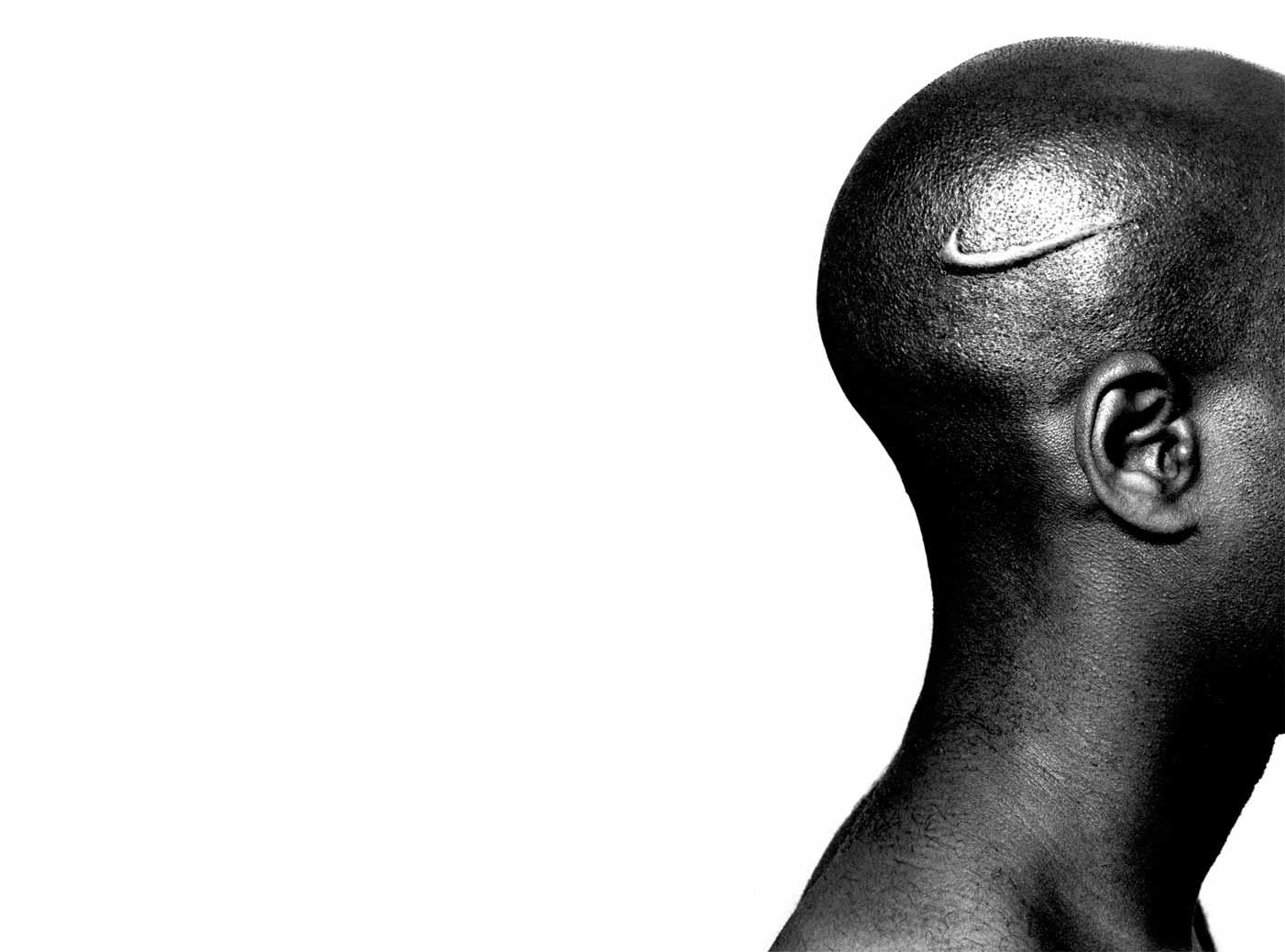 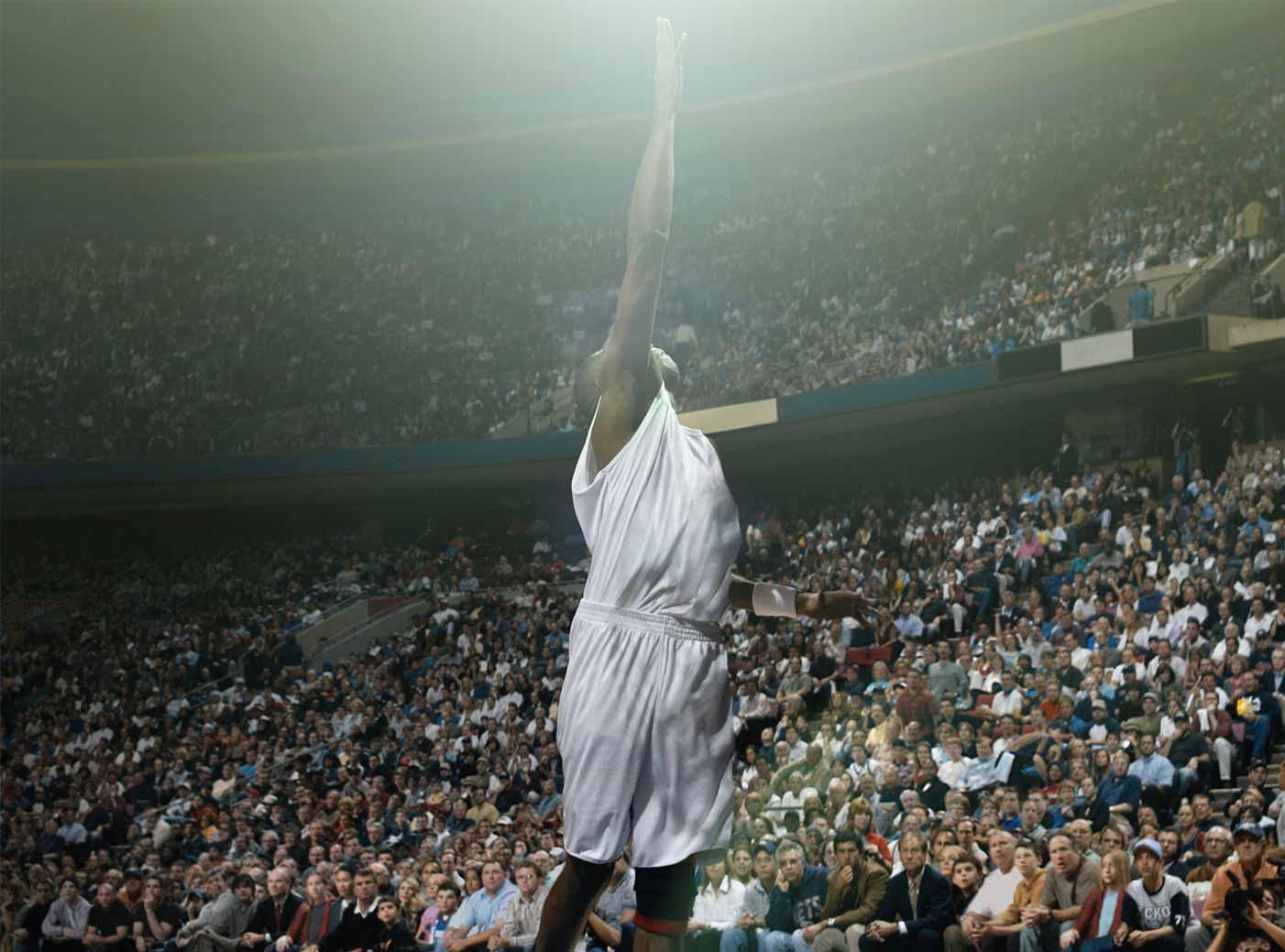 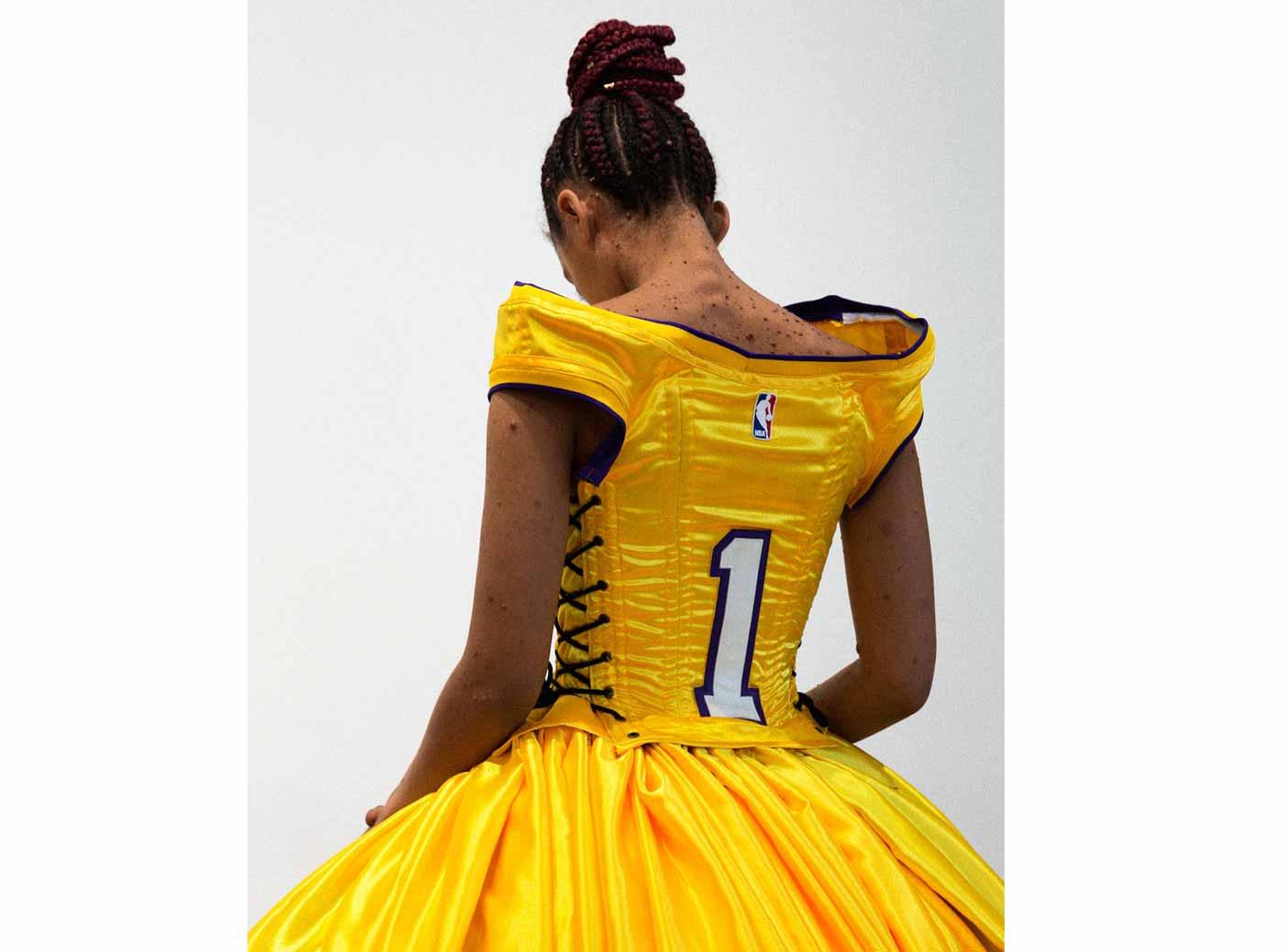 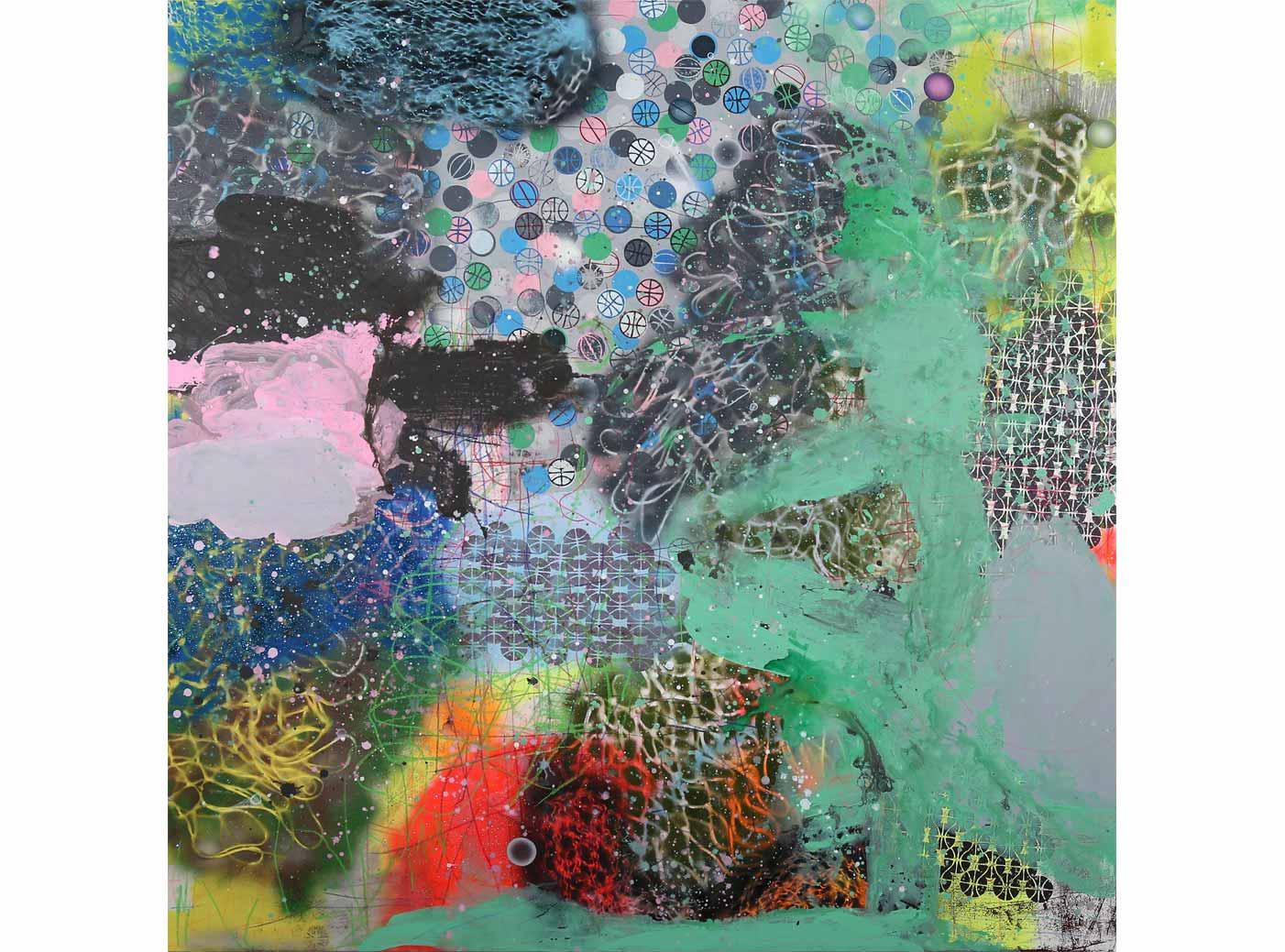 © David Huffman, photo by Jay Jones, courtesy of the artist 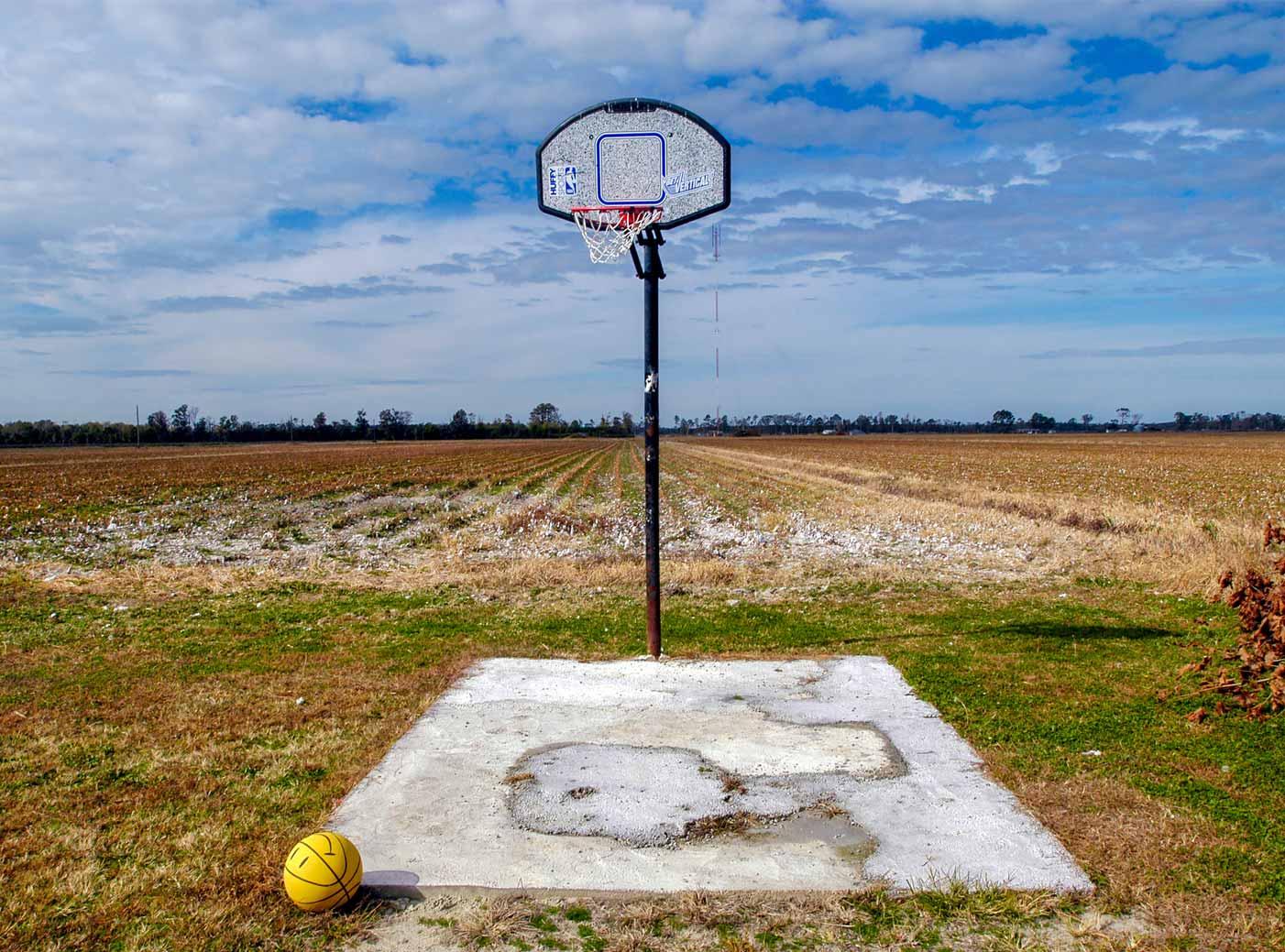 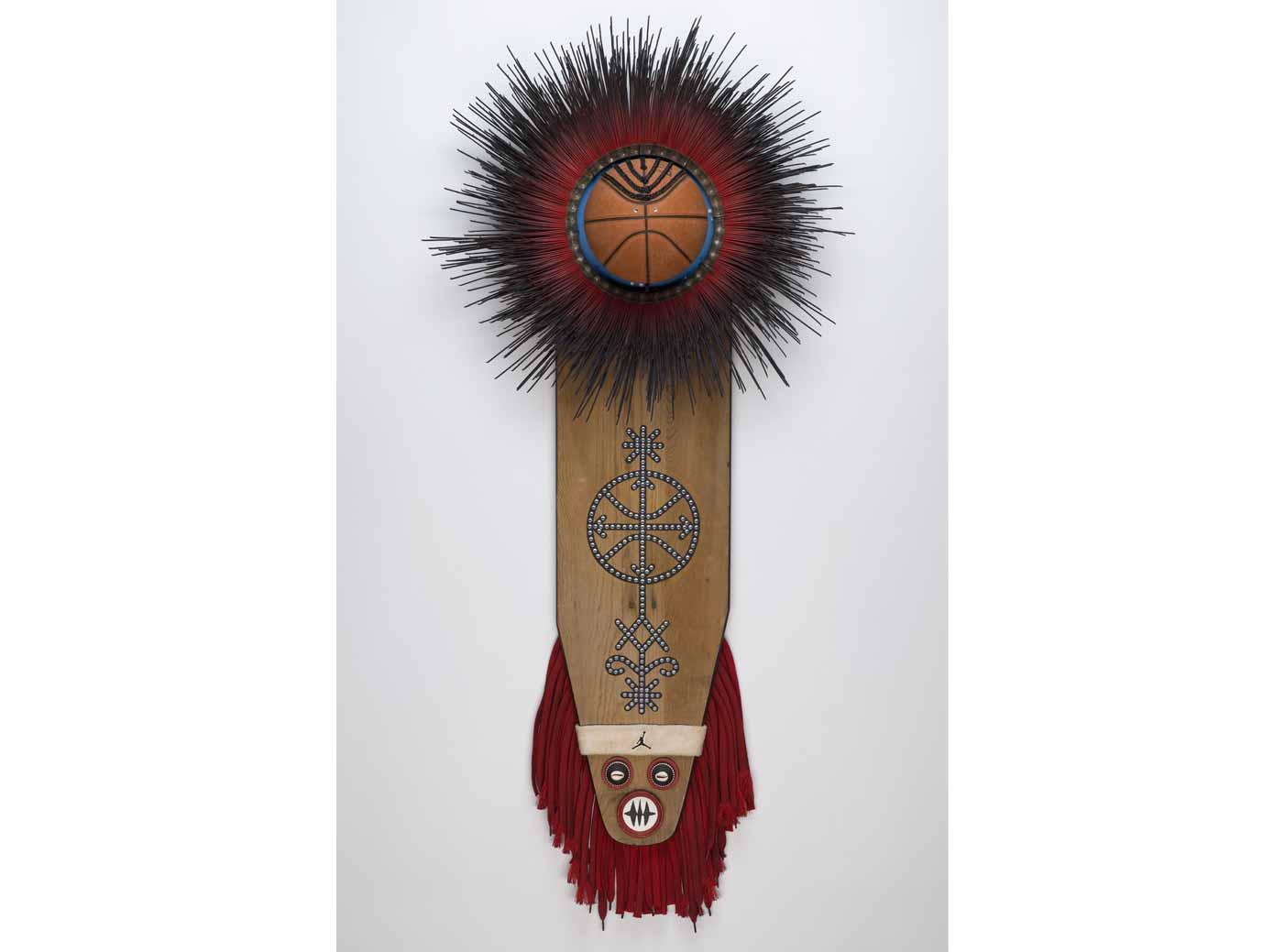 © André Leon Gray, photo courtesy of the artist and the North Carolina Museum of Art, Raleigh 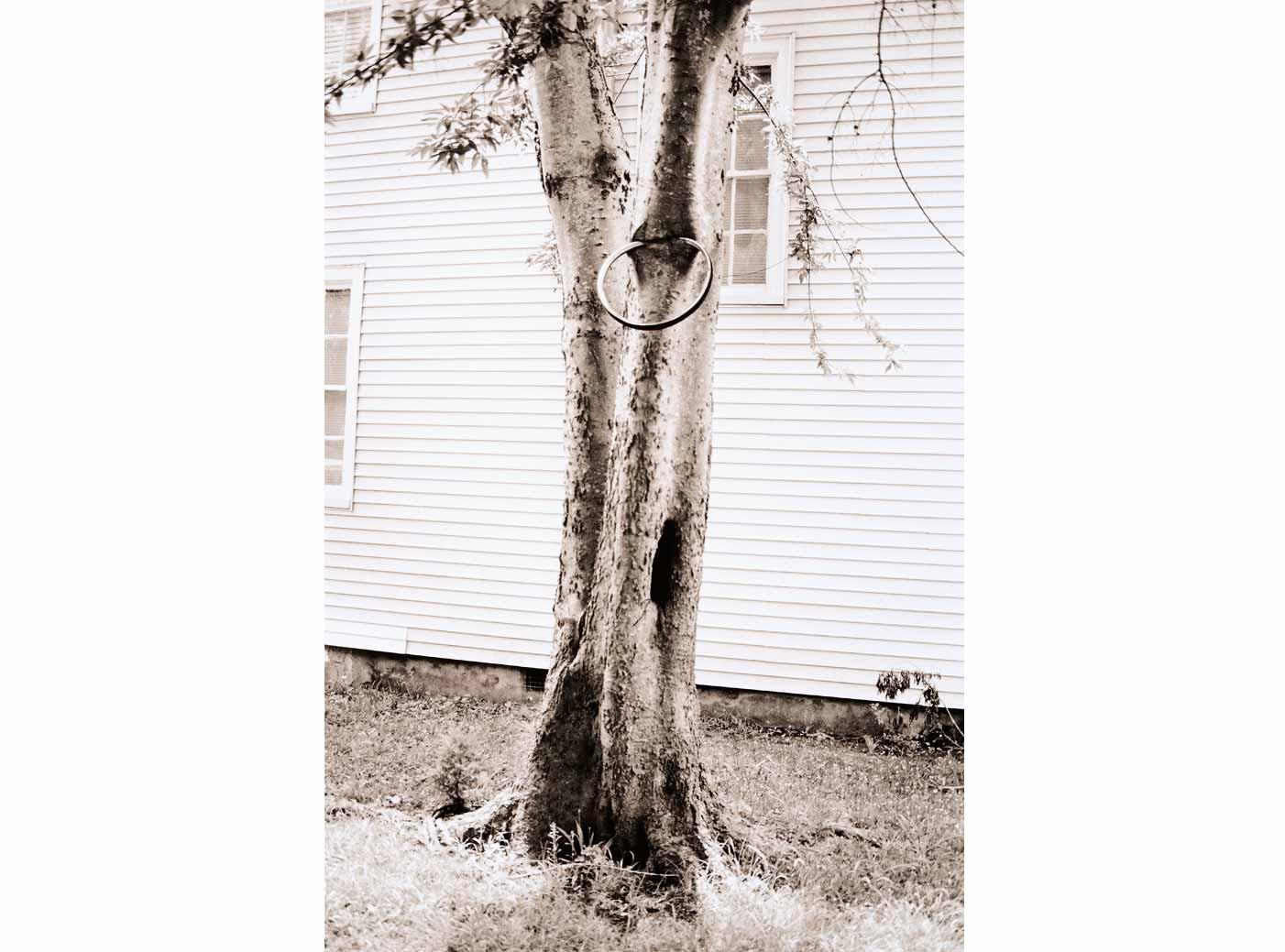 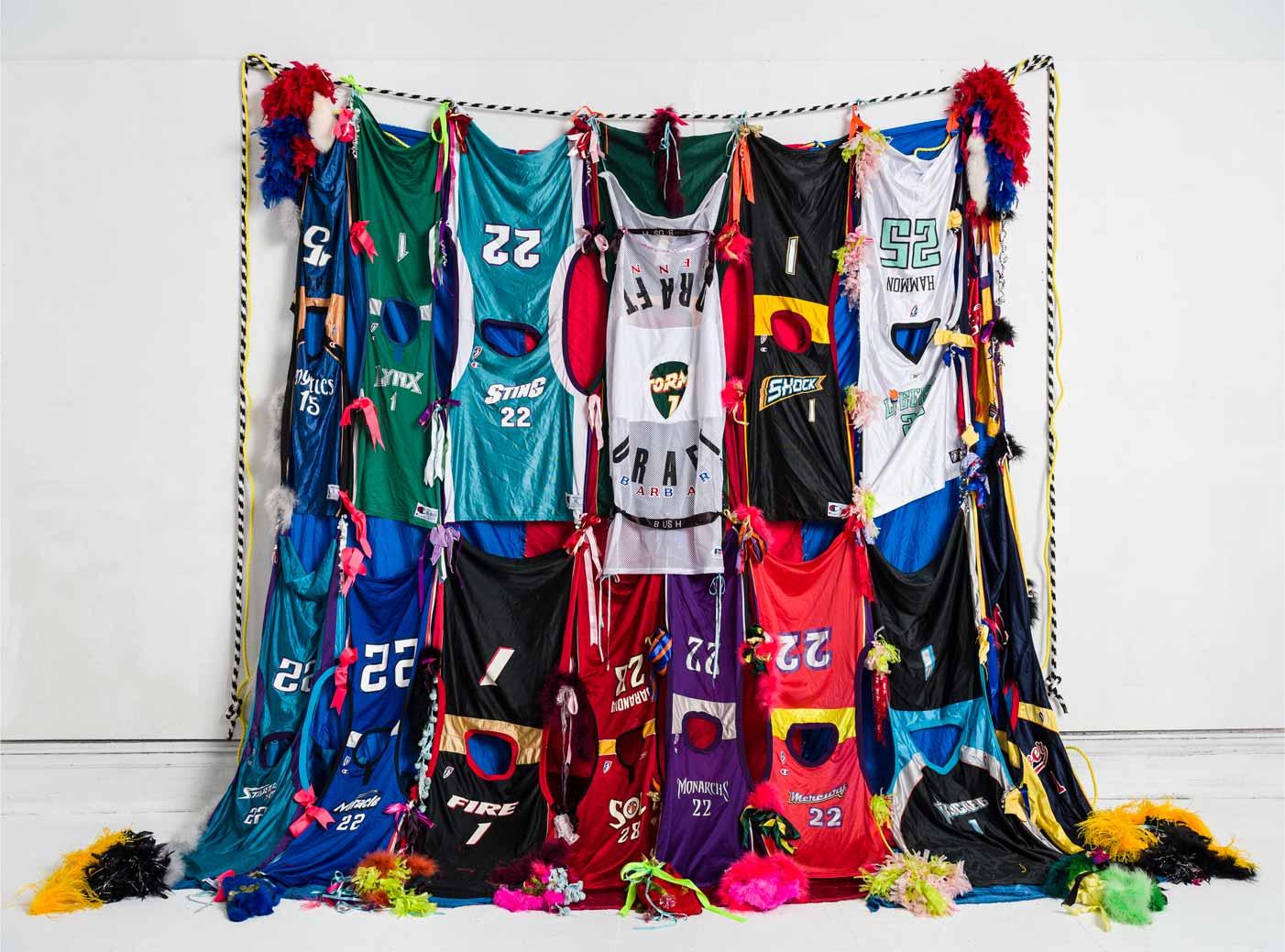 Basketball was used to assimilate Indigenous students in boarding schools like the Carlisle Indian Industrial School in Pennsylvania. According to Adams, this process of assimilation completely changed a matrilineal dynamic to a patrilineal social structure. Of the anonymous young women pictured in Girls' Native American Indian Basketball Team I, Adams says, “I wanted to honor them and elevate their presence in history. I want the viewer to know they existed....”

Soon after Naismith created the game in 1891 using two peach baskets and a soccer ball, Senda Berenson adapted the game for women, cites Stamey. Despite the gender divide in the game, she is encouraged by the success of the WNBA. Yet in an NBA store, artist Suzanne McClelland found discounted WNBA team jerseys on “…one messy circular display rack in the basement near the bathrooms.”

Canadian artist Esmaa Mohamoud explores gender roles and black masculinity through her photographs created in collaboration with Qendrim Hoti. In her One of the Boys series, Mohamoud depicts African American male models in corseted jersey ball gowns. Stamey describes that Mohamoud had trouble finding male models to wear the dresses because they feared emasculation.

“I was interested in the rituals performed during a basketball game, and the seemingly religious or cult-like experience of it….” André Leon Gray

André Leon Gray created an urban myth for his mixed media “artifact” Black Magic (It’s Fantastic): future archeologists discovered the ceremonial mask within a gentrified, historically black neighborhood. “…[I]t was used in a secret initiation by young African American men [who] wanted power and dominance on the basketball court, since they lived in a world that had historically denied that agency,” relates Gray. “I was interested in the rituals performed during a basketball game, and the seemingly religious or cult-like experience of it….”

Gray sees basketball as an object used for the expression of one’s higher self and the magical ability to defy gravity. “It represents hard work and self-determination to reach a goal,” shares the artist. For his piece, Gray designed his own vèvè—a sacred Haitian Voudou symbol. He incorporated “the grip lines of the basketball and the four cardinal directions, as divine guidance to a victorious game and global dominance.”

Victor Solomon's dramatic Church consists of an elaborate stained-glass backboard, sparkling crystal net, and 24k-gold-plated steel. On the basketball courts of Solomon’s youth, racial and ethnic distinctions took a back seat to the ability to play, shares Stamey. “The idea of the game offering a means to acceptance is striking.”

Amy Funderburk is a professional artist and freelance arts writer based in Winston-Salem, NC, specializing in visionary works in which she explores the intersection of the physical world with a more fluid spiritual realm. She works out of the Sternberger Artists Center in Greensboro, NC, and maintains a blog, Drinking from the Well of Inspiration, to provide deeper insight into her creative process. Follow her on twitter: @AFunderburkArt