Own a Piece of Presidential History

Politicos and would-be statesmen have the opportunity to bid for ‘Air Force One’, ‘The Oval Office’ and a John F. Kennedy Lincoln limousine, the most recognized symbols of the American Presidency, when they are offered in Bonhams American Presidential Experience Auction in New York on Wednesday October 14.

The American Presidential Experience Collection, comprising seventy-six lots of artefacts, both original and reproductions, represents one man’s lifelong exploration of the institution of the American presidency.

Entrepreneur Jim Warlick turned a childhood hobby of collecting political memorabilia–including a bronze bust of John F Kennedy–into a business, and then an unrivaled museum exhibition of Presidential memorabilia.

Among the headline offerings are; a life size replica of the Oval Office; the Lincoln limousine which carried President John F. Kennedy to Fort Worth airport before his flight to Dallas for his fateful visit on November 22,1963; and a full-scale fuselage recreation of the Kennedy era ‘Air Force One’.

The collection has been sourced from Jim Warlick’s non-partisan travelling educational exhibition, ‘American Presidential Experience’, which has toured the USA for more than twenty years, including visits to Rockefeller Center for the 2004 election when it was renamed Democracy Plaza, Barack Obama’s historic 2009 inauguration, and numerous National conventions, both Republican and Democrat. Jim’s moving museum was an incredible resource and introduction for thousands of children and adults alike.

Warlick’s collection will be complemented by other fascinating artefacts in the Bonhams auction, including a limited edition 1992 Roy Lichtenstein screen print ‘The Oval Office’ and an original 1864 Lincoln-Johnson portrait campaign flag.

Proceeds of the sale of the American Presidential Experience will go towards funding Jim Warlick’s latest personal venture: The Worker’s Legacy Project in Burke County, North Carolina, which will honour the millworkers of the Appalachian mountains, specifically his mother who worked in a hosiery mill for over thirty years. 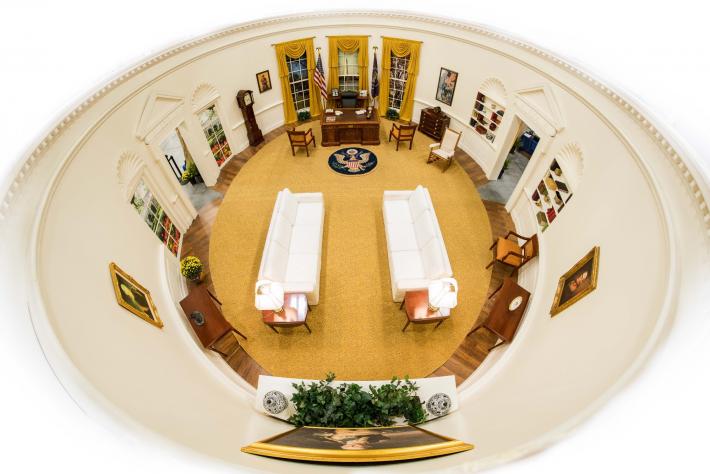 A full-scale facsimile of the Oval Office, one of the most famous rooms in the world, complete with wooden panels, a fireplace and furniture including a scale fine wood reproduction of the Resolute Desk where the president conducts his business and gives presidential addresses to the nation. This replica has been used as a set for television programmes such as The Today Show and Saturday Night Live.

The modern Oval Office was created by President Franklin D. Roosevelt who relocated it to the Southeastern corner of the West Wing allowing easier access from the first family’s private residence within the White House. 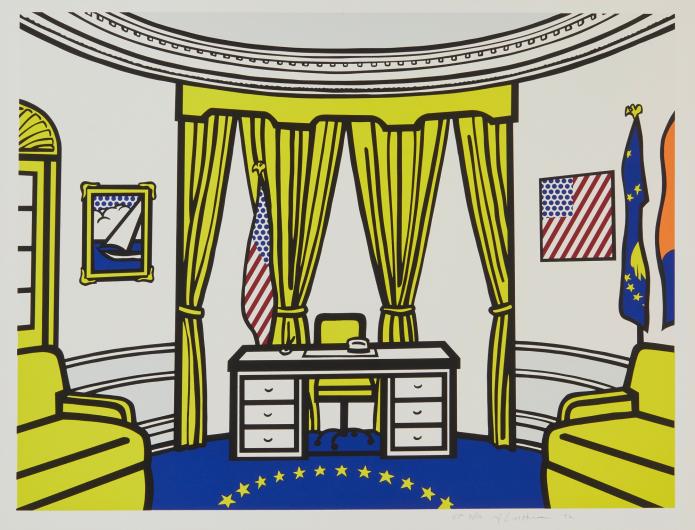 Screenprint in colors on Rives roll paper, signed and dated in pencil, numbered EP 3/12 (an exhibition proof, aside from the numbered edition of 175 and 25 artist's proofs), co-published by the artist and Ronald Feldman Fine Arts, Inc., New York, for the Artists for the Freedom of Expression Project to benefit the Democratic National Committee.

Having researched the archives of the interior of the Oval Office, Lichtenstein added authentic decorative details, as well as his versions of the actual paintings that once hung there. 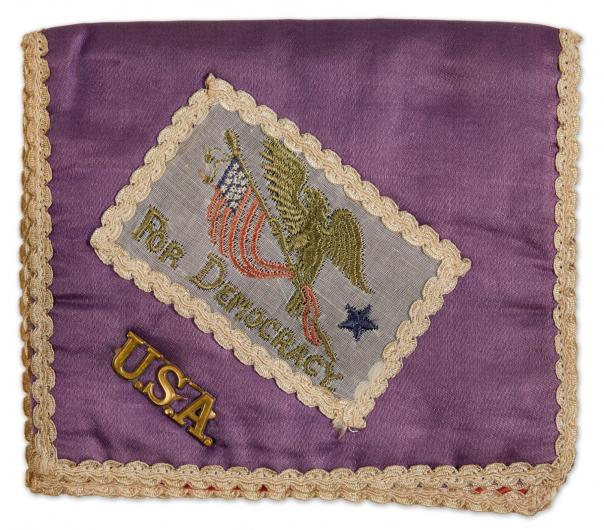 An embroidered silk handkerchief linen purse belonging to the First Lady, embroidered with an eagle clutching an American flag above "For Democracy," which Edith Wilson gave to White House maid Maggie Rogers soon after President Woodrow Wilson's 1917 inauguration. Rogers bequeathed the purse to her daughter Lilian Rogers Parks, also a White House maid who produced best-selling memoirs of her career on the presidential domestic staff, from the Hoover to the Eisenhower administrations.

According to Lillian Rogers Parks (in a letter included), Edith Wilson gave the purse when she and the President moved into the White House, with the words "President Wilson prefers that I not keep this because someone might see me with it and not understand." 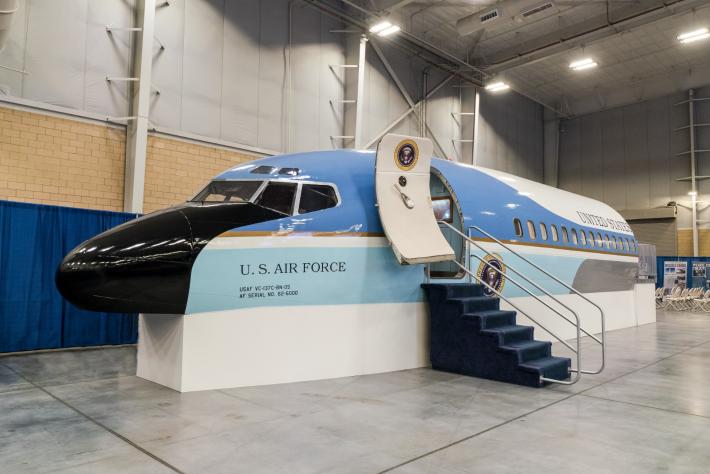 A Replica of the Kennedy Air Force One

Kennedy ushers in the jet age…
An exhibition quality full-scale Boeing 707 fuselage retrofitted as a replica of SAM 26000, John F. Kennedy's Air Force One, the first jet engine to be fitted as a Presidential plane.

The replica includes the full cockpit, crew officers’ workstations, the state room where Lyndon B. Johnson was sworn in as President, as well as the president’s quarters. It recreates in minute detail the original designs by Raymond Loewy, who created the distinct blue livery which has been used for all Air Force One airplanes since, and who helped Jackie Kennedy design the interiors. Also included is a reproduction of the First Lady’s famed pink suit. 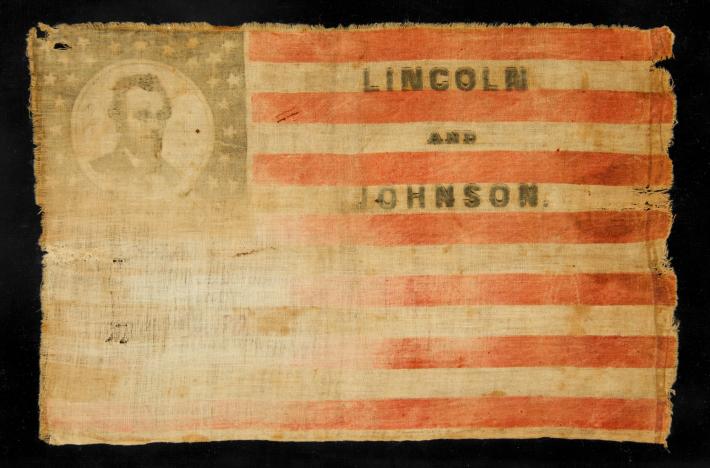 Faced with opposition from General George B McClelland, President Lincoln strategically looked to the South for a Union Party running mate. He found Johnson, who was effective for winning the election, but not as effective after Lincoln was assassinated just a month after his inauguration. Campaign flags from 1864 are much rarer than those of 1860, probably because the war took up the resources that might otherwise have been available.

The Lincoln Mark V limousine used by John F Kennedy as his ‘personal’ car around the White House. 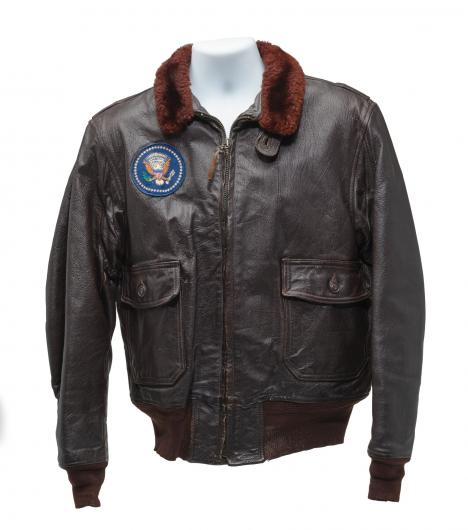 An original U.S. Government issue G-1 flight jacket, with sewn patch of the Seal of the President of the United States over the right breast, originally owned by President John F. Kennedy and gifted to David Powers circa 1962-1963.

Officially known as the President’s ‘Special Assistant’, Powers was a close friend of Kennedy and often referred to by White House colleagues as "John's other wife."

After JFK's death, Bobby Kennedy tapped Powers as the shepherd of the Kennedy legacy and first curator of the JFK museum when a nascent collection travelled the world in 1965, until his retirement from the JFK Library in 1994.

An important relic of the American Presidency, this spectacular jacket is a testament to
one of JFK's most important friendships.