Works from the Personal Archive of Dennis Oppenheim come to Auction 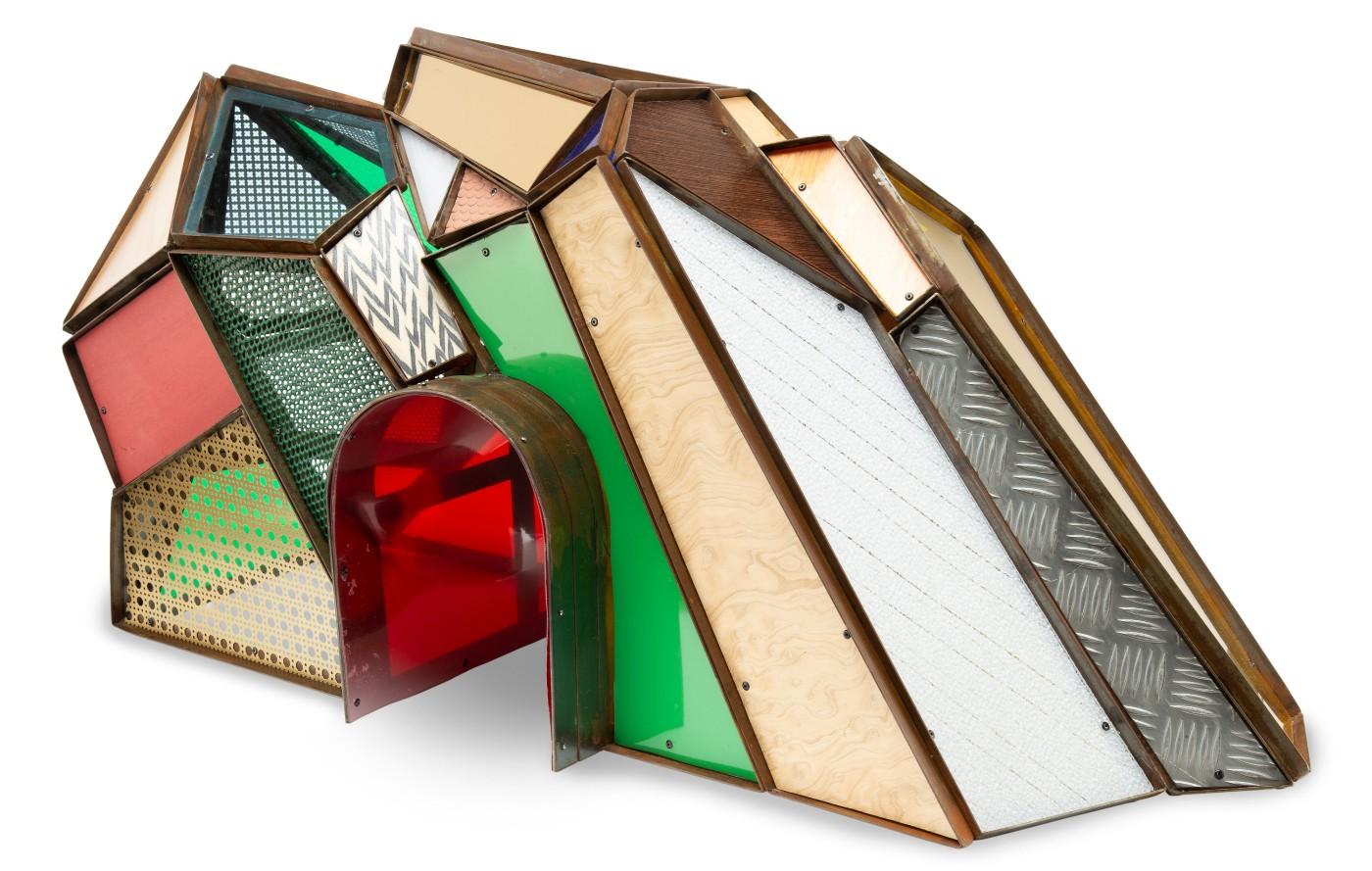 DALLAS, Texas – Works from the personal archive of renowned artist Dennis Oppenheim that were donated to the only skyscraper designed by Frank Lloyd Wright are coming to auction for the first time in Heritage Auctions’ Design Auction Oct. 1 in Dallas, Texas.

Oppenheim was a pioneering conceptual artist whose offered collection includes models and works on paper that were donated to the Wright-designed Price Tower Arts Center in Bartlesville, Oklahoma, where it was shown in the exhibition Dennis Oppenheimer: Indoors, Outdoors (2005).

“Oppenheim was an unconventional and unpredictable artist,” Heritage Auctions Design Director Brent Lewis said. “These thoughtfully rigorous objects, made throughout five decades of his career, reveal the vigor he undertook in approaching complex issues. Their simplicity, and in many cases their aesthetic appeal, belie the complex meanings that are present in all of Oppenheim’s work, and it is inspiring to explore his work through this personal and diverse personal collection.” 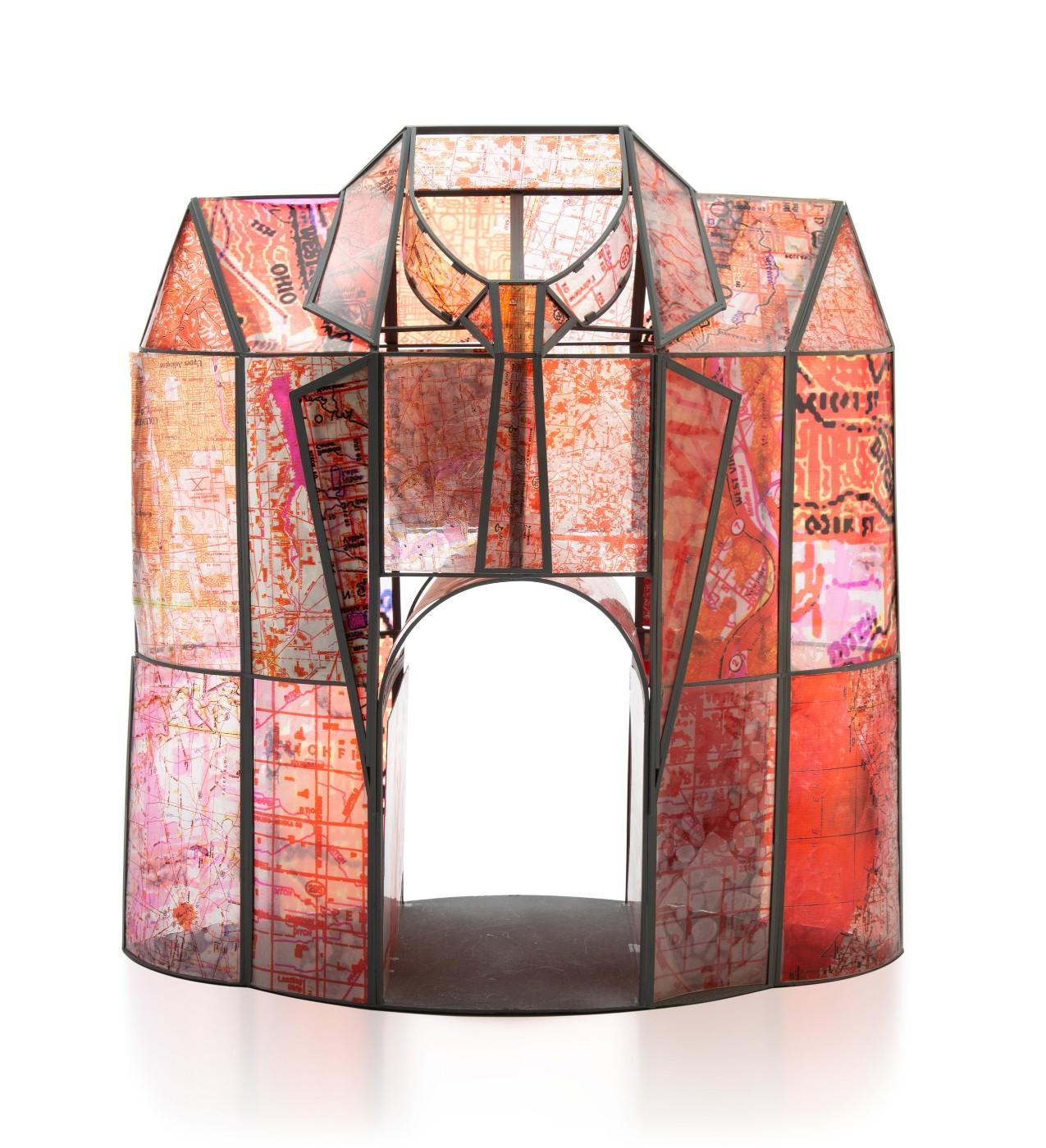 Among the highlights of the Oppenheim collection in the sale is Dennis Oppenheim Viewing Station #1, 1967 (estimate: $3,000-5,000) is from a series of models that constitute his first deliberate move beyond the gallery context to addressing outdoor space. Viewing Station #1 consists of a four-sided square base structure that tapers up to a smaller platform for viewing land. Oppenheim said he did Viewing Stations, on which people could stand to look at land and excavated structures. The Viewing Stations, he said, prioritized the action of seeing while playing down the centrality of an actual object created to facilitate the experience of the work.

Dennis Oppenheim Entrance Piece, 2002 (estimate: $3,000-5,000) is a model for Entrance, which was built in 2004 in Tempe, Arizona, and Entrance Piece, which was built in 2005 in Taoyuan City, Taiwan. This model also relates to Entrance to a Garden, part of Oppenheim’s large-scale works at the Storm King Art Center in New Windsor, New York, in 2016. Through this work, Oppenheim beautifully fuses art, architecture and fashion.

Engagement, 1997 (estimate: $3,000-5,000) is one of Oppenheim’s most recognizable works. The model for a series of outdoor sculptures depicting two large-scale steel rings topped with houses tilting away from each other. The rings evoke images of solitaire diamond engagement rings, in an homage to the institution of marriage and its complexities. Individual versions are featured in the Helsinki City Art Museum in Finland and the Nevada Museum of Art in Reno, and has been displayed as a public art project in a range of cities, including New York, Hong Kong, San Diego, California and Vancouver, Canada.

Variation on a Device to Root Out Evil, 1997 (estimate: $3,000-5,000) relates to one of Oppenheim’s most well-known large-scale outdoor sculptures, Device to Root Out Evil, which was exhibited at the 1997 Venice Biennale and the 2007 Vancouver Biennale, and is in the Collections of the City of Palma de Mallorca, Spain and The Denver Art Museum in Colorado. The metal and glass work portrays an upside-down early rural New England-style church precariously balanced on the tip of its steeple, which is buried in the ground.

“Price Tower is showing work that moves from conventional sculpture toward something I feel to be the beginnings of a new sculpture/architecture hybrid,” Oppenheim said at the time of his donation of his works. 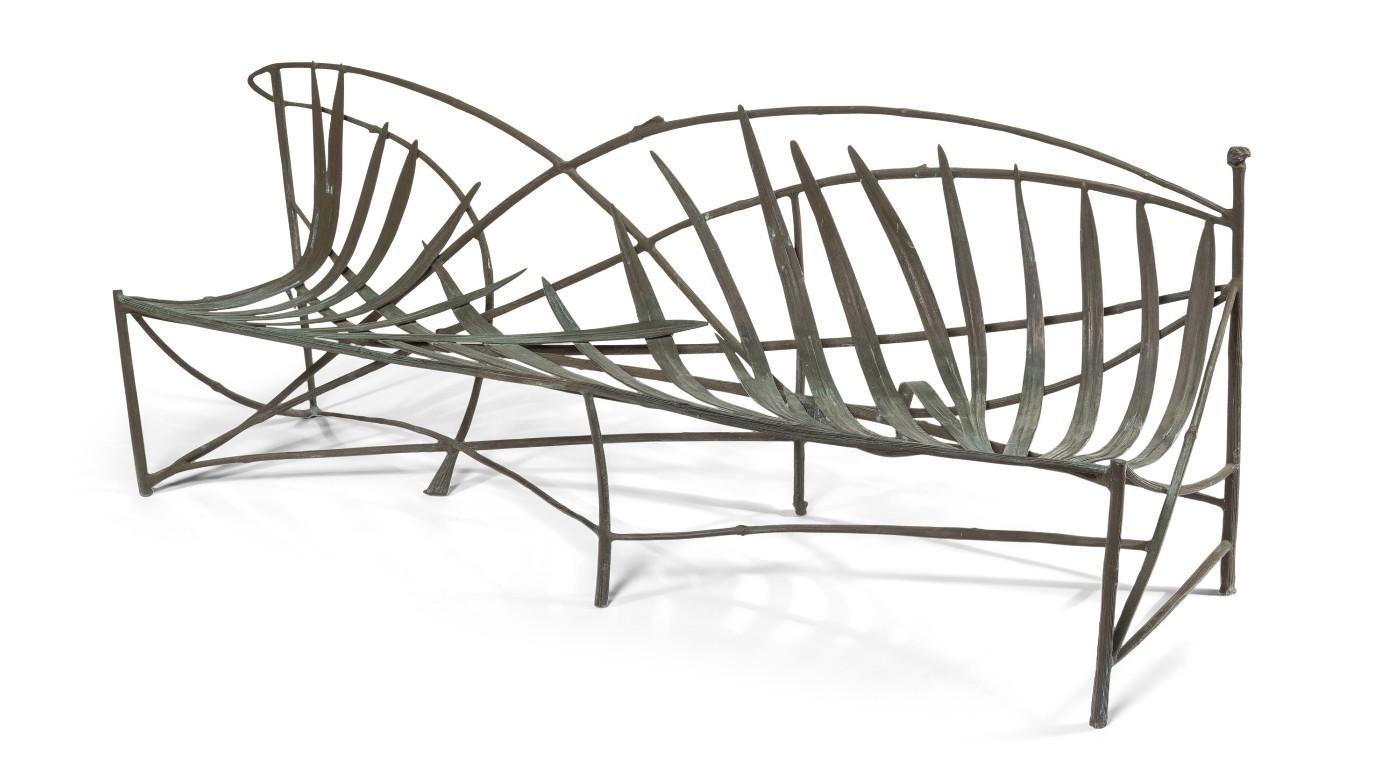 Among the other top lots in the sale is Claude Lalanne’s Garden Bench from the DeWitt and Lila Archeson Wallace Garden at Colonial Williamsburg, Virginia 1984 (estimate: $120,000-180,000). The bench comes from an expansive group of furniture, ceramics and sculpture for the Wallace Garden, and at the time of its completion represented the artist’s largest American public commission. It is included in a series of benches, tables and chairs Lalanne created for this installation. The Lalanne bench is offered from an important private collection, including rare works by Francois-Xavier and Claude Lalanne, Georges Jouve and Harry Bertoia.

The auction includes a trio of stunning carved ebony works by French artist Alexandre Noll from the same collection, including:

Heritage is also offering works by Frank Lloyd Wright from the collection of Price Tower Arts Center, including Frank Lloyd Wright Casual Armchair from Price Tower, Bartlesville, Oklahoma, 1956 (estimate: $12,000-18,000). Price Tower’s “casual chair,” also known as the “sloped armchair,” was created for assorted spaces in the building, including H.C. Price’s executive office. One of just 40 originally made, the offered chair includes the original silver painted aluminum frame and Wright’s signature red upholstery. The sale of the works from Price Tower Arts Center, many duplicates within their collection, will allow the continued preservation of Price Tower, ensuring that the legacy of the Price family and Frank Lloyd Wright endures.

Relief Panel from Price Tower, Bartlesville, Oklahoma, 1956 (estimate: $8,000-12,000), includes oxidized copper panels, sculpted in relief, alongside the copper louvers and architectural elements of the building’s exterior. The panels also were used within the building’s interior, adding to the visual motifs that include chair frames, moldings and trims used throughout the building. This Relief Panelwas installed as a work of art in the office of the director of the Price Tower Arts Center. 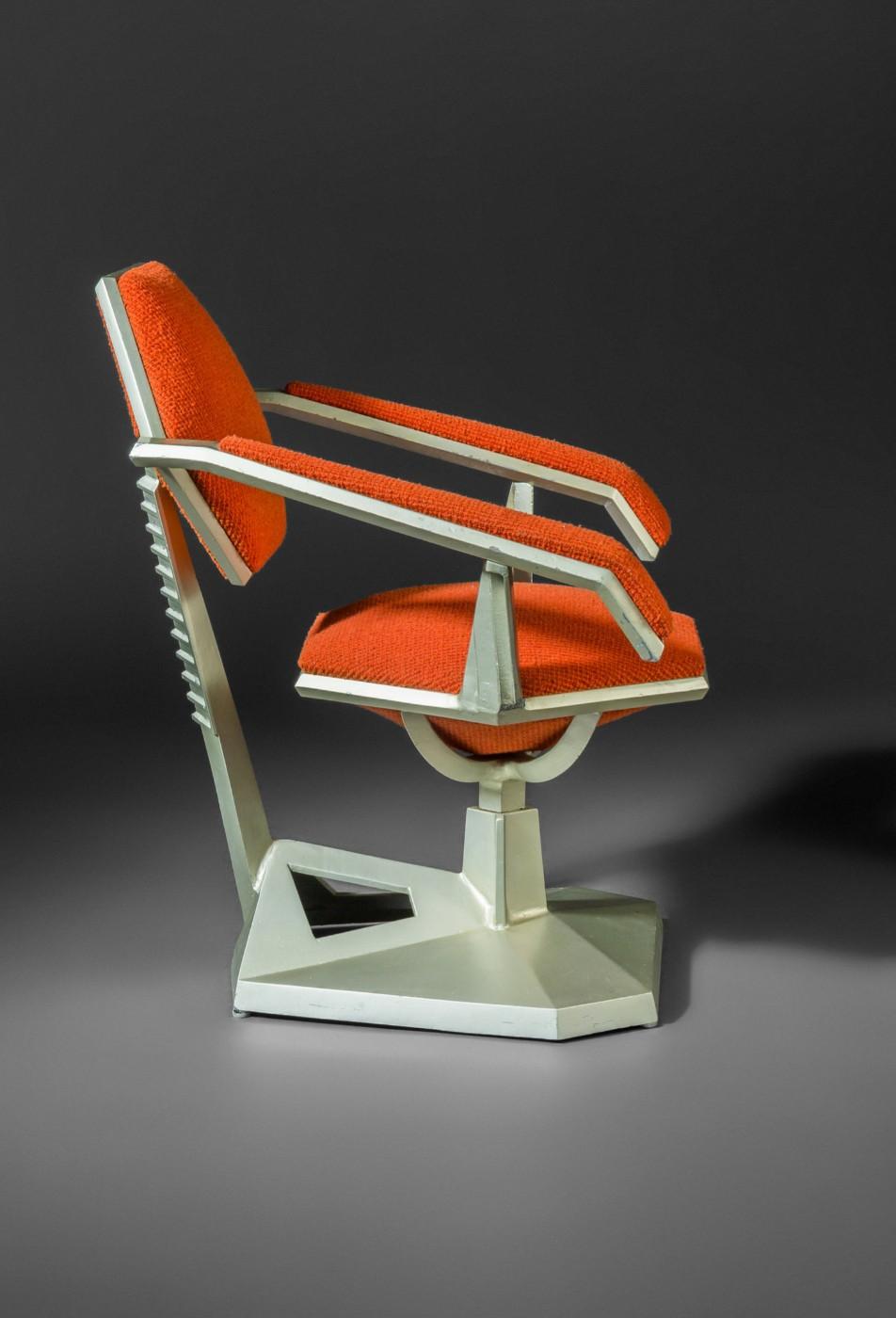 Frank Lloyd Wright Fireplace from Price Tower, 1956 (estimate: $8,000-12,000) is the first complete fireplace from the residential spaces in Price Tower ever brought to auction. Designed for commercial and residential use, the building includes seven apartments, which were designed with copper fireplace heaters. The sculpted relief of the fireplace echoes the design of the copper panels present on the exterior of the building.

Table from Price Tower, Bartlesville, Oklahoma, 1956 (estimate: $8,000-12,000) was designed by Wright for Price Company personnel in the 16th-floor commissary and exterior terraces of the tower. These designs include angular forms reminiscent of the building itself, that also were used by Harold and Carolyn Price at their Hillside residence, which also was designed by Wright.